Camille Demyttenaere and Jean Hocke are a married couple and Instagram influencers who travel the world together. 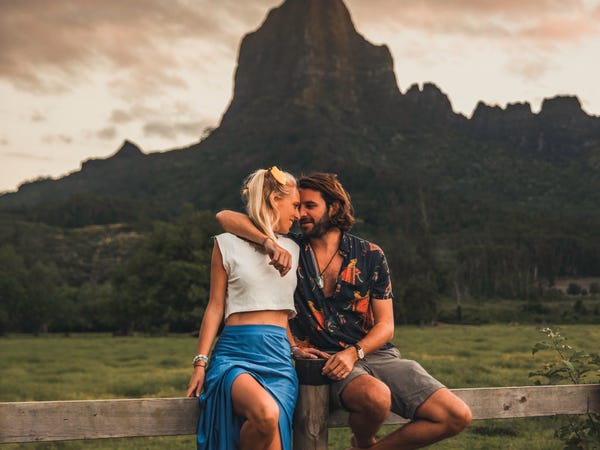 The couple is originally from Belgium, but they're based in London and spend the majority of their time traveling.

When Insider spoke to them recently, they were spending a month in Switzerland.

The couple got married at the end of 2017, and the photos they took on their honeymoon at the beginning of 2018 gave them the travel bug.

"We were posting about very unique and special places because we like adventure," Demyttenaere said.

Demyttenaere and Hocke went viral in 2019 after they posted a photo of themselves hanging out of a train. 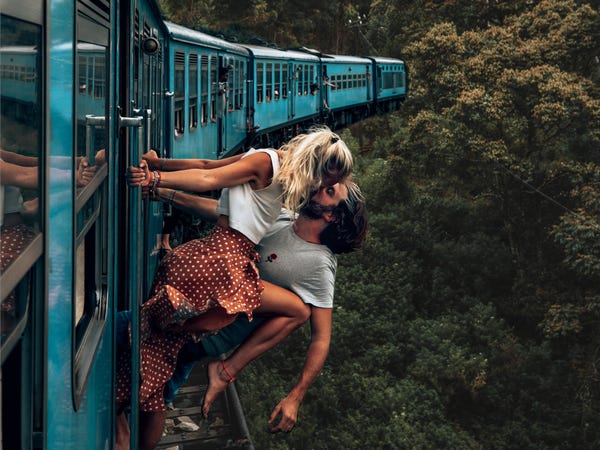 The photo makes it seem as though Demyttenaere and Hocke could have fallen to their death if they lost their grip, but the couple told Insider's Rachel Hosie that the post, which had over 70,000 likes at the time of writing, was actually an optical illusion.

In reality, the couple would've fallen onto the tracks, which are quite wide, if something had gone wrong during the shoot.

The camera's angle and the turning train hide the track.

The train photo isn't the only picture the couple has taken that looks dangerous, and they said that's intentional. 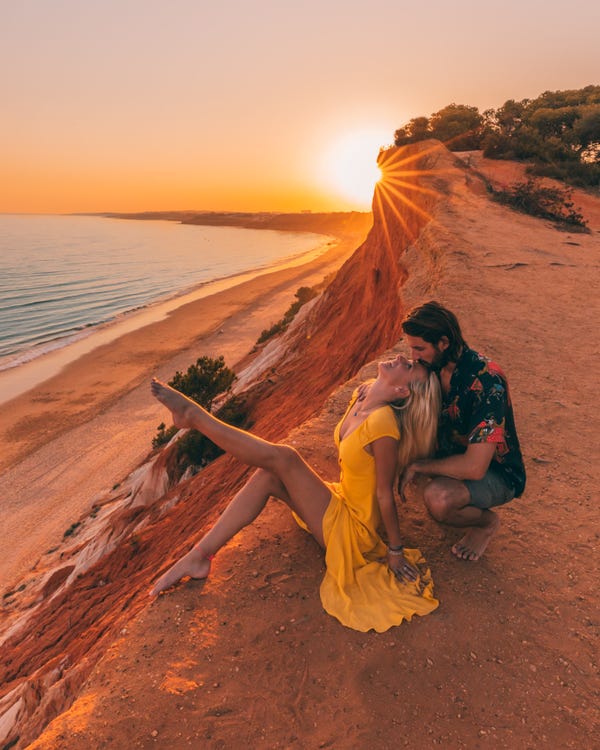 "Whenever we were posting something that was looking a little bit more daring, we could feel that people were getting very excited, in both positive and negative ways," Hocke said of their followers' responses to those kinds of pictures.

The couple also said they "will try to prepare the pictures to get a cool end result" whenever they find something that looks "a bit daring."

"The focus of our pictures is to make them visually appealing," Demyttenaere said, and if they are able to get a photo that appears somewhat risky, that's an added bonus.

But Demyttenaere and Hocke have a set procedure that keeps them safe, even during their more daring photo shoots. 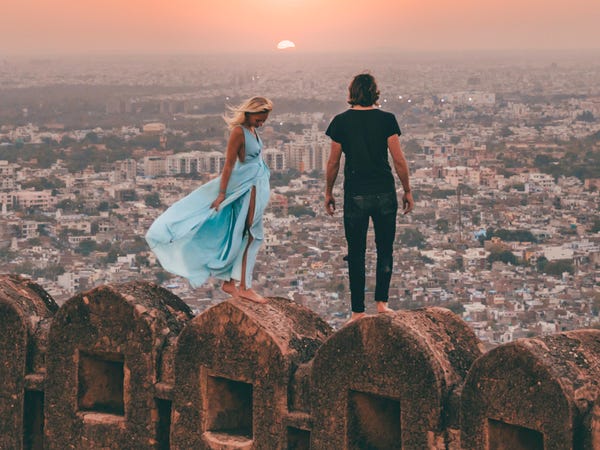 "The first very important part is the preparation," Hocke said.

Although Demyttenaere and Hocke's photos have a natural look, they're actually carefully planned, particularly in terms of where the shoot takes place.

The duo told Insider that they look to Pinterest, Instagram, and even magazines for places to take interesting photos.

"It's always something prepared," Demyttenaere said of the locations for their photo shoots.

After they pick a spot, the couple works out the timing for their photo shoot. 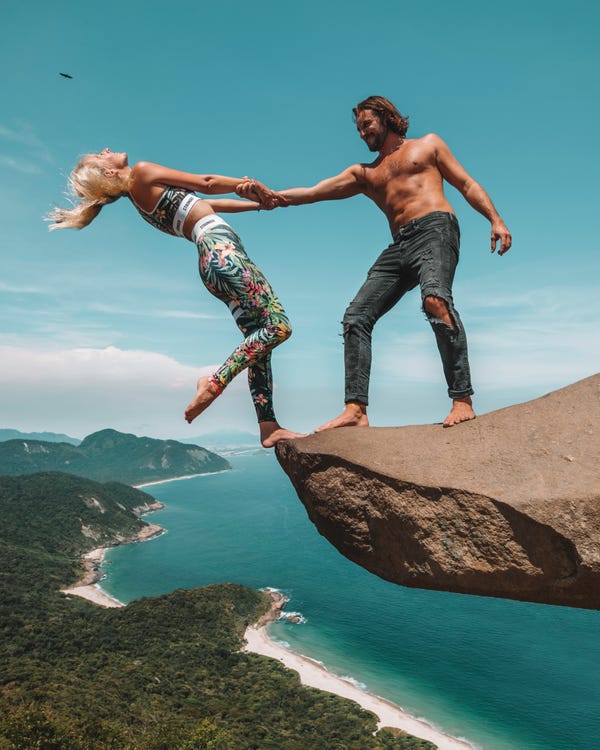 "Once we know the spot, it's very important to know when to take the pictures," Hocke told Insider.

"In Brazil, where we're hanging off the rock, you have the sun exactly in your face if you go there in the morning," Hocke said of this picture, taken on the Pedra do Telégrafo in Brazil. "So you have to come in the afternoon."

"You have to know when and in what conditions to take the photo."

They appear as though they could fall to the beach in this shot, but there's actually a surface below them that the angle doesn't show.

"And that means sometimes you have to come back several times," Demyttenaere said of the timing of shoots. 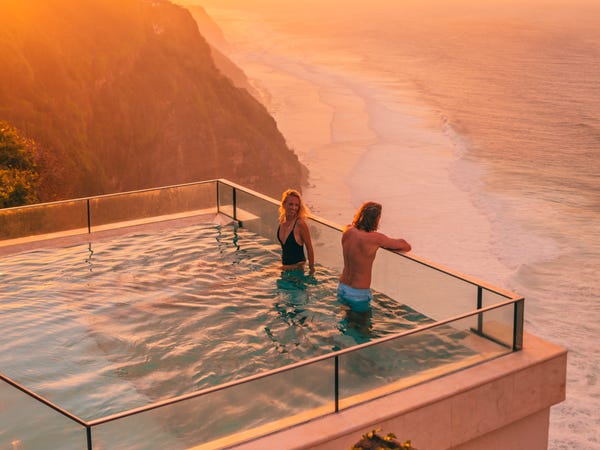 Demyttenaere explained that the conditions were not exactly right the first time around for many of their photo shoots.

"So we have to go back a second time to get it right," she added.

This photo, taken on a bridge in Jaipur, India, had to be shot at sunrise. 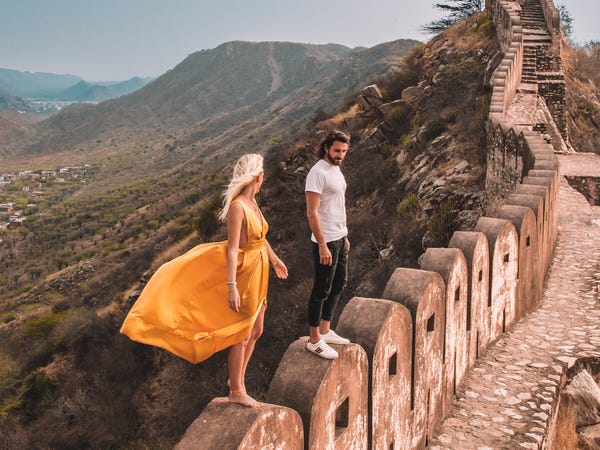 The bridge becomes crowded with tourists during the day, so the couple had their photo shoot at sunrise to avoid people.

Demyttenaere said she also always goes barefoot during their shoots, as she has a better grip and it makes her less likely to fall.

"The third point is to have the right lens," Hocke said of setting yourself up for success with photo shoots. 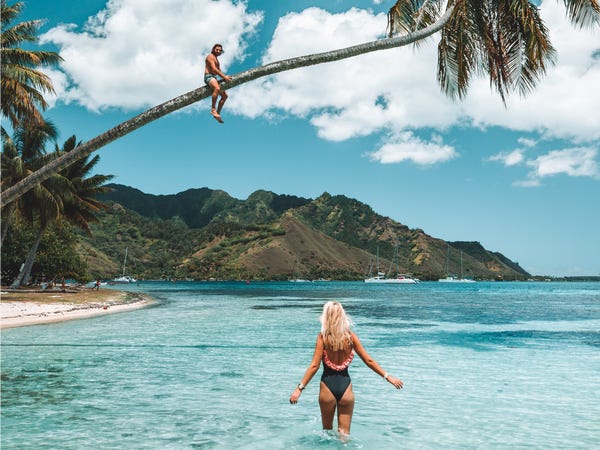 "Typically, when you want a lot of the background behind you, you need to work with the wider angle lens," Hocke said.

"It means you can take a photo from pretty close up but still have the effect of the person looking kind of far away. And you can capture a lot of the surroundings."

"That's especially good when you want to do some optical illusion type of photo," he added.

The couple told Insider they also practice their poses in advance of their photo shoots. 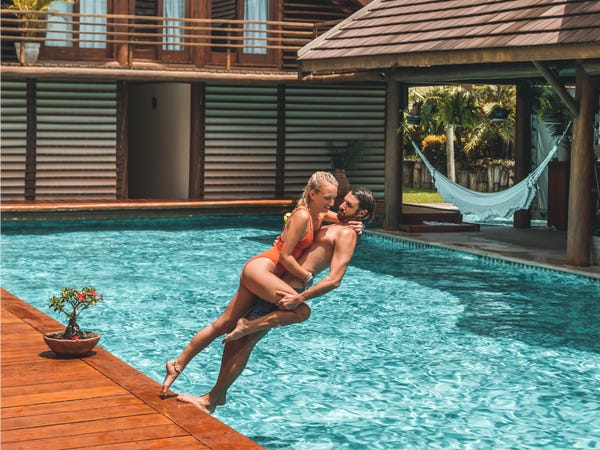 "We try to position ourselves in a way that looks very cool," Hocke said.

They often practice their poses, so they can get the shot they want with ease when it's time to click.

"We always try to do it in a safe spot before to make sure we nail the pose," Hocke told Insider of their practice sessions.

They said it's also important to take multiple photos. 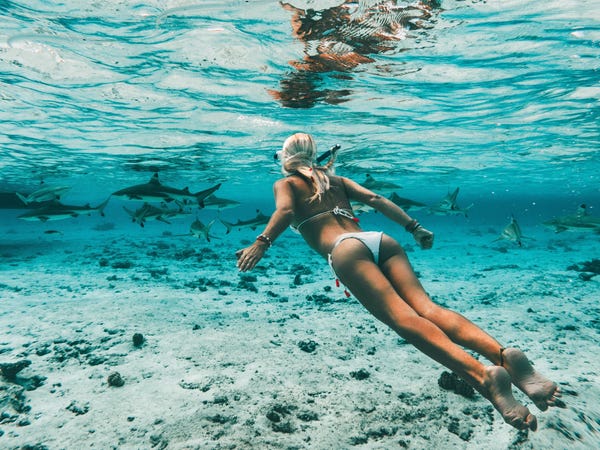 Demyttenaere and Hocke make sure to have several options for shots, even if they're not the ones in control of taking the photos.

Having more photos increases the likelihood they'll get a shot worth sharing.

"The angle and the way the picture is taken is always very important," Demyttenaere told Insider. 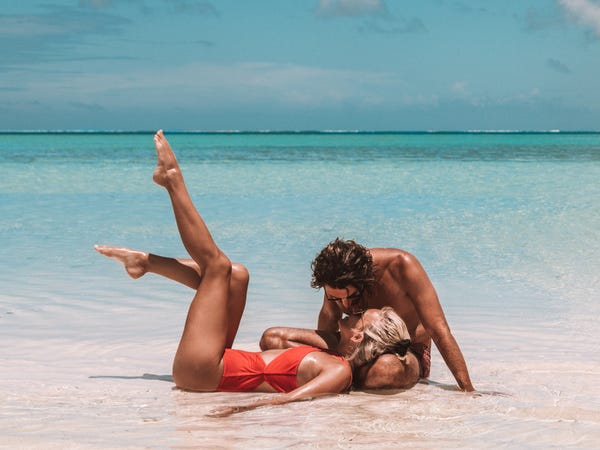 "For instance, in the train picture, it was very important to take the photo while the train was turning," as that created the illusion there were no tracks to catch them if they fell, she explained.

Likewise, in the photo of the couple posing on the edge of a cliff, they positioned the camera below them to make the shot look more dramatic.

They also told Insider they take the majority of their photos with a tripod, as they prefer taking their own pictures since third parties can't know exactly what they want.

Hocke said people often think capturing a viral photo mostly requires luck, but he believes a lot of planning actually goes into getting a daring shot. 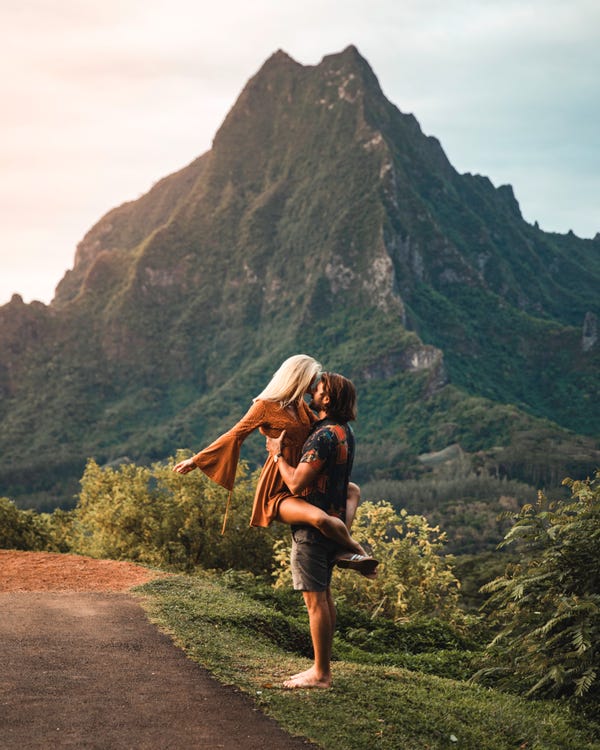 "We knew exactly what we were doing, and we almost hoped it would go viral in a way," Hocke added, speaking of the train photo.

"We put a lot of effort into it," Demyttenaere added.

"We would never put ourselves in a situation that could potentially be life-threatening," Demyttenaere said. 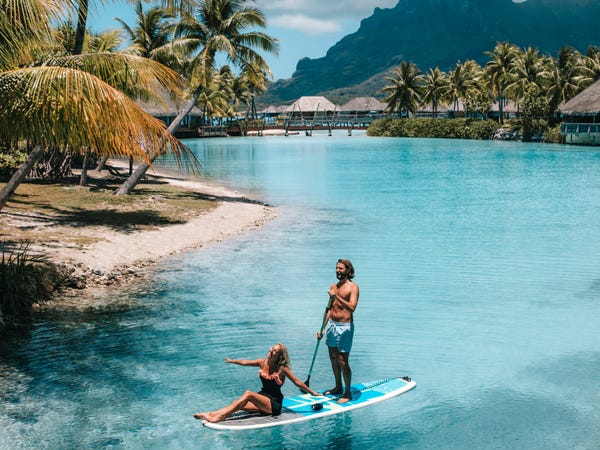 "The problem we face is that these kinds of riskier photos go over well, so where is the limit?" Hocke said.

"We make it look much more dangerous than it actually is," Hocke said of their photos.

Some people criticize the couple's dangerous photo shoots, but they said that won't stop them from taking daring pictures. 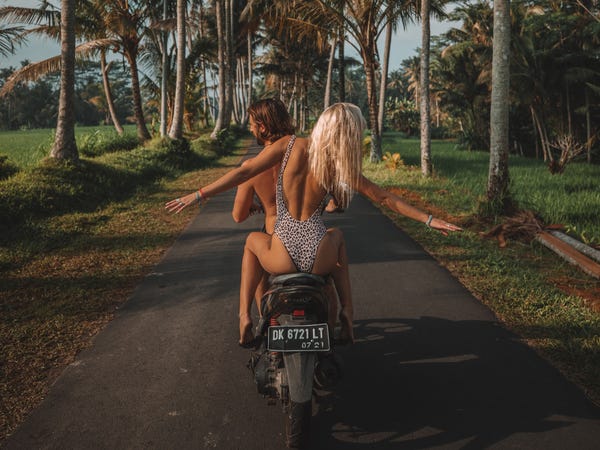 "For us, creating a picture like this is a form of art," Demyttenaere told Insider. "We want to create a certain feeling or emotion in our followers, and it's part of what we do."

"We don't think we should restrict ourselves to non-dangerous pictures," Hocke said.

The couple also shares behind-the-scenes tips for their shoots on their Instagram stories, showing others how to be as safe as possible if they choose to replicate any of the photos.