The Boeing 737 Max aircraft remains grounded, but that doesn’t mean airlines are waiting for its return to sell tickets on future flights.

Travelers shopping for fall and holiday season flights will find hundreds of U.S. flights scheduled on a Max 8 or Max 9 on Southwest, American, United and Alaska.

Airline data giant OAGpulled schedule information for USA TODAY and found 393 flights scheduled on a Max on Monday, Sept. 9, for example. That’s a week after Labor Day, the date through which Southwest and American, the two largest U.S. operators of the plane, have canceled Max flying. On a mid-December Monday, the total is 327, according to OAG, though some airlines don’t assign plane types that far in advance so the total will grow.

Southwest accounts for more than half of the upcoming Max flying, followed in order by American, United and Alaska, which will add the plane to its fleet as previously planned with a couple daily flights between Seattle and southern California.

The schedules are subject to change, of course, especially if the grounding lingers. Airlines already have extended Max flight cancellations twice as Boeing has worked on a software fix and the Federal Aviation Administration and regulators around the world scrutinize the plane involved in two fatal crashes in less than five months that killed 346 people, and they’ll soon have to decide whether to do it again.

The Max represents just a fraction of U.S. airlines’ fleets. Southwest has 34 Max aircraft in its fleet of more than 750 Boeing 737s. American has 24 in its fleet of 950 mainline aircraft. Southwest will operate the Max on just a single daily flight on a route in most cases.

Still, airlines are prepping for the plane’s return, so travelers who care about what kind of plane they are on should be, too.

The Max became a household word after the second fatal crash, of Ethiopian Air Flight 302 on March 10, which led to the Max grounding by the FAA on March 13.

Travelers bombarded airlines with questions about whether they were due to fly on the plane and how to avoid it. Southwest added a “How do I look up my aircraft type” feature online. The social media storm has subsided since the grounding but will likely pick up again as the plane’s return nears.

Airline executives admit some passengers are going to avoid the plane, at least initially, and surveys show varying degrees of flyer reluctance to board one. More than two in five passengers said they would take flights that are less convenient or more expensive to avoid the Max, according to a survey by Atmosphere Research Group.

“I’ll be the first to say that in studies like this what people say and what they end up doing can be dramatically different,” said Henry Harteveldt, president of Atmosphere Research and a veteran travel analyst. “But even if the actual numbers are one tenth of what the research shows, airlines that operate the 737 Max are going to face a very tough time … convincing people to fly the plane.”

Airlines say it is too early to tell if passengers are booking away from the Max for travel this fall and beyond because the amount of bookings this far in advance is small.

“It would be hard to have enough data to really tell, but when we have looked, we don’t see any difference in bookings for those airplanes, at least today,” United President Scott Kirby said.

Here’s where Southwest, American, United and Alaska plan to fly the Boeing 737 Max

All airlines note aircraft type is subject to change at any time, including last minute. Flight schedule information provided by OAG.

Max aircraft in fleet: 34 Max 8s. The airline is due to take delivery of 41 more this year, but the timing now depends on the plane’s return.

Max routes: All over the country, including:

How to check what kind of Southwest plane you’re booked on/booking: On the airline’s reservations page, click on the highlighted flight number directly above the flight departure time. If it’s a nonstop flight, the number will be right next to that label. 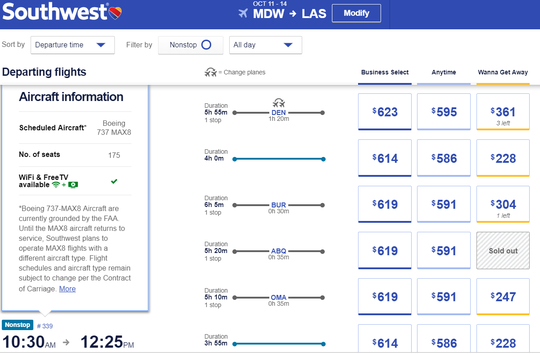 Southwest Airlines lists the plane scheduled on your flight when you click on the flight number. (Photo: Dawn Gilbertson, USA TODAY)

Max aircraft in fleet: 24 Max 8s. The airline is scheduled to receive 16 more this year.

Daily Max flights in mid-December: 52. American says aircraft aren’t always assigned months in advance, and this low number is based on its schedule a year earlier. The number will grow as the travel dates draw closer, so passengers might end up scheduled on a Max even if they booked another aircraft type.

Max routes: Mostly flights to and from Miami including:

How to check what kind of American plane you’re booked on: The aircraft type is listed under the flight times next to the flight number. The Max is listed as 7M8-Boeing 737Max 8. 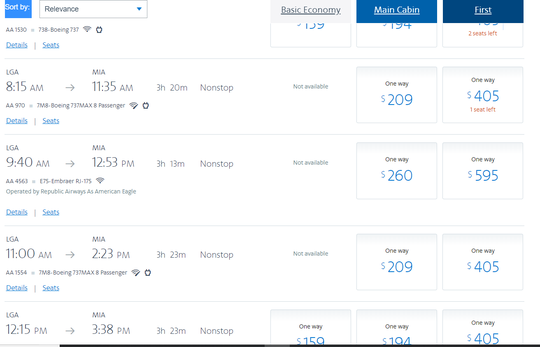 American Airlines lists the aircraft type for a flight below the flight times and next to the flight number (in small print.) (Photo: Dawn Gilbertson, USA TODAY)

How to check what kind of United plane you’re booked on: Click on details, which is highlighted in small type next to the posted flight length. 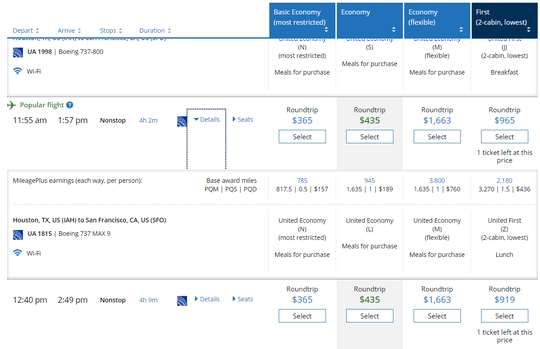 To find your plane type on United, click details, which is next to the flight length. (Photo: Dawn Gilbertson, USA TODAY)

Max in fleet: 0. The airline has 32 Max 9s on order and is due to take delivery of the first one this summer and two more by the end of the year.

How to check what kind of Alaska plane you’re booked on: Click on nonstop (or one stop if there’s a stop), and a popup box displays the aircraft time. The airline lists the Max as 7M9. 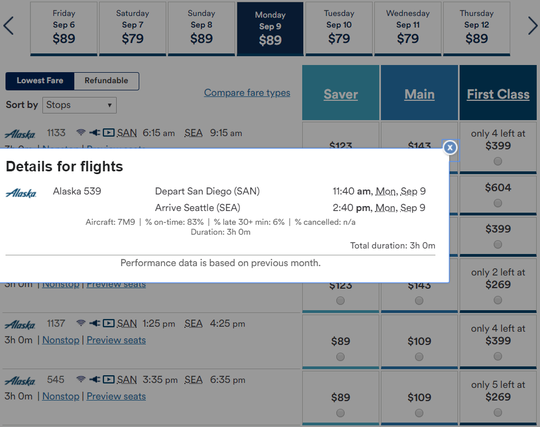 Alaska Airlines lists the aircraft type when you click on "nonstop'' or "one stop.'' The Max is listed as 7M9 (Photo: Dawn Gilbertson, USA TODAY)