Monster thrills… and the Gruffalo: Britain’s big five theme parks have surprises in store this summer for children

Every week our Holiday Hero Neil Simpson takes an in-depth look at a brilliant holiday topic, doing all the legwork so you don’t have to. This week: Theme parks with extra fun for families.

Britain’s big five theme parks have surprises in store this summer. Top of the list come some of the country’s most unusual hotel rooms, all set within or beside the park gates so guests can be first in line for rides in the morning.

Families with young children should check out the Gruffalo hotel rooms or the rival Room on the Broom rooms at Chessington World of Adventures in Surrey. 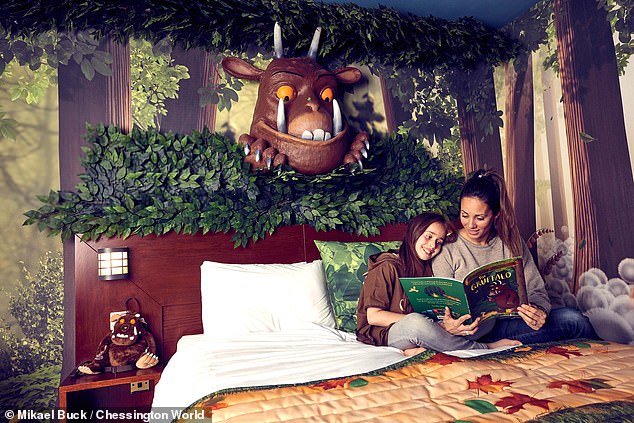 Book it: A Gruffalo room at Chessington World of Adventures

A secret gift is hidden in every room, scenes from the picture-books are painted on the walls and the Gruffalo rooms have a larger-than-life model of the Gruffalo itself looming above the main bed.

Rooms sleep up to five, with bunk beds in a separate area for children, and stays include breakfast and ‘early ride’ slots in the park.

The Gruffalo rooms aren’t cheap, with families of four paying about £400 for a night, but prices include parking, theme park, zoo and Sea Life entry, evening entertainment, access to the hotel’s splash pool and more. Animal-themed or ordinary rooms can be half the price (chessingtonholidays.co.uk).

At action-packed Alton Towers in Staffordshire a mini-village of star-gazing pods offers an equally unusual place to stay. The wooden pods are small, though they can sleep a family of four, and guests share nearby shower and toilet facilities.

If you want more luxury, the park also offers CBeebies and Caribbean-themed hotels plus en suite lodges, glamping tents and treehouses (some with hot tubs) that sleep up to eight. Star-gazing pods cost from £78 a night, while theme park entry starts at £34pp with under-threes free (altontowersholidays.com)

Quirks are also on offer at the Shark Hotel at high-adrenaline Thorpe Park in Surrey. The ‘bite-sized’ rooms aren’t big – kids get bunk beds – and the only windows are portholes in the doors.

But the fishy theme is fun, with guests walking through the mouth of a giant, sharp-toothed metal shark to get to the sea-blue reception desk. Midweek deals include two days in the park, one night in a shark cabin, parking and breakfast from £129 for two (thorpebreaks.co.uk).

At the Legoland Castle Hotel near Windsor, in-room treasure hunts, free gifts and goodies such as free swim bags come as standard.

Enjoy breakfast surrounded by intricate Lego models, then cross the hotel drawbridge for a day in the park. Themed rooms for a family of four, theme park entry, pools, parking and character ‘meet and greets’ cost between £90pp and £190pp (legolandholidays.co.uk). 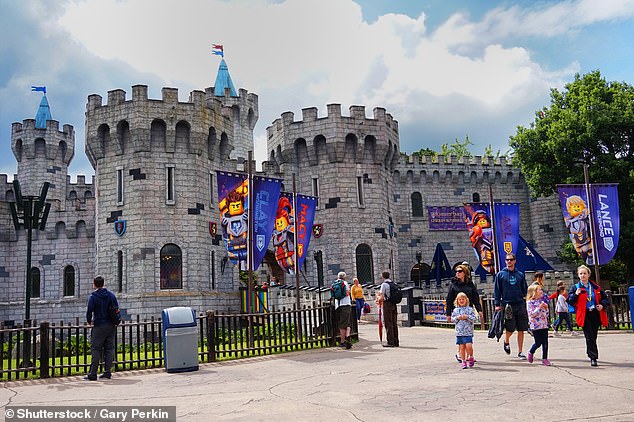 Thomas the Tank Engine is one of the stars of the show at the Drayton Manor Resort in Staffordshire.

Away from the grown-up Maelstrom, Apocalypse and Pandemonium rides there’s a calmer Thomas-land area with rides and experiences for younger guests. In the on-site hotel, the Fat Controller welcomes you, train tracks line the floor and there are Thomas & Friends-themed rooms.

Book a stay from £70pp including park tickets, breakfast and evening entertainment led by characters from the books (draytonmanor.co.uk).