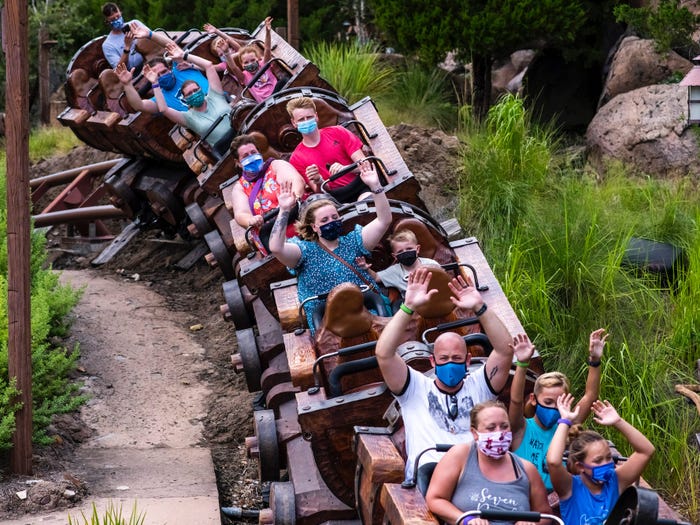 People visiting Disney World are required to wear face masks at all times — even for photos.

Though there are various consequences for removing masks, some people have attempted to take theirs off for on-ride photos. Now, however, it seems that those who do so will have their faces virtually covered by digital masks, as reported by WDW News Today on Wednesday.

The report was published after a man named Tony Townsend reportedly shared a photo of parkgoers on the Animal Kingdom ride Dinosaur to a theme-park Facebook group. In the photo, which has been reshared by WDW News Today, a parkgoer in the last row of the ride's vehicle can be seen with what looks like a digital mask across her face.

Disney World previously enforced its face-covering rules by not allowing maskless riders to purchase ride photos that showed them without masks, according to WDW News Today. But because some ride vehicles allow for multiple groups to ride together, that meant those who did wear masks could not purchase their photos either if one person removed theirs.

As the publication noted, the new, edited photos require "additional processing," so there can be "a bit of a delay for them to finally appear" in Disney World's app.

Some people applauded the theme park for what they feel is a "brilliant" idea.

Others said the effort to edit digital masks onto parkgoers is dangerous, and argued that Disney World should remove visitors who don't follow mask rules instead as they could potentially spread COVID-19.