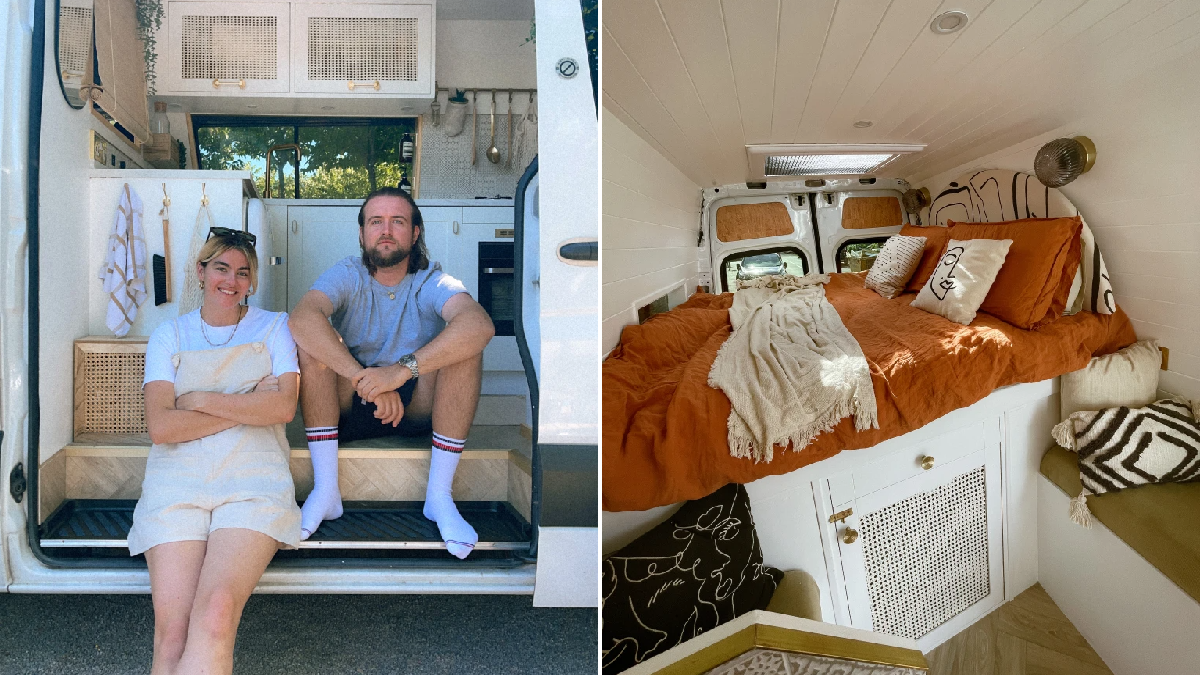 Does sacking in your job and travelling the world sound like an appealing prospect?

Well, you might need to sharpen your DIY skills if you want to make it a reality.

That’s exactly what couple Liv Montgomerie, 27, and Lewis Sullivan, 28, did to embark on their unconventional nomadic lifestyle.

Liv and Lewis quadrupled the value of their Mercedes Sprinter van from £11,000 to £45,000 by transforming it into a chic mobile home fit with a toilet, shower and projector. The pair documented their DIY journey and their travelling adventure on TikTok, @2bags1van.

Liv, who was an event producer and Lewis was a management consultant working in financial services, but in 2019 they decided to leave their home and quit their jobs in London to travel around Asia.

But just as they were about to take off on their adventure, the pandemic hit and scuppered their plans.

Then, in February this year, they decided to spend £11K on a van and renovating the blank canvas into their very own mobile home.

They spent a total of seven months and £13,000 on the project, including all the furnishing, solar panels, electric and plumbing.

It’s safe to say that they would gain a hefty profit if they were to sell the van, but first want to use it to travel the world.

‘We did the entire build, plumbing and electrics ourselves with the expertise and help from Lewis’s Grandad John who is a retired joiner. As we worked on it full time for three months, we saved huge costs in comparison to getting someone else to do the work for us,’ Liv said, speaking to Tap Warehouse.

They managed to save money throughout the project by teaching themselves DIY, for example when making the seats and cushions. They cut some wood to size, found some cheap foam and fabric, then used a staple gun to attach the cushions to the wood.

Another example of how they saved money was with the headboard. Liv was inspired by a £250/metre fabric but made her own for just £8.

Instead of getting a custom-made mattress cut to the perfect size of the bed, they bought a standard size from Argos and cut it with an electric carving knife to fit the bed perfectly.

The worktops were £50 from IKEA, the pull-out table was £9 from IKEA and they built their kitchen and hanging cabinets themselves so they saved on even more costs.

Lewis adds: ‘Lots of campervan converters think that these things need to be bespoke made or cut from wood and really you can buy off the shelf and cut it to the size you need, it just takes a little thinking outside of the box.’

They even say that they’ve never had a better night’s sleep than on their newly made van bed. But, of course, there have been some challenges along the way.

‘Everything in the van conversion felt like a learning curve and nothing ever went to plan the first time,’ says Lewis.

‘The trickiest thing throughout the entire build was building in a van that’s curved. There are no straight lines, the walls are curved, and the ceiling and floor are different widths – it was a real mind boggler.’

Once they got around the tricky shape of the van, it was time to freshen up the furnishings.

The finished look is glorious boho style with a contemporary edge, including sleek finishes and gold detailing.

‘Liv loves gold so every detail down to sockets and visible screws have a gold finish,’ adds Lewis. ‘We wanted it to feel warm and cosy, so our main pops of colour are pinks and oranges, however we kept in lots of white to make the small space feel larger.

‘We also added elements of exposed wood and rattan to add to the warmth of the space and create more character.’

As for the most expensive process, Liv explains: ‘The item we spent the most money on was definitely our solar panels and electrical system, and we have the max amount of power for a van of our size so this cost us around £2,200.’