THE US is finally back open to British tourists, so we headed to New York on the first two flights from Heathrow to remind ourselves why the Big Apple is one of the best holiday destinations in the world.

A whistle-stop tour of the city gave us an opportunity to see what’s new to do in the city that never sleeps. 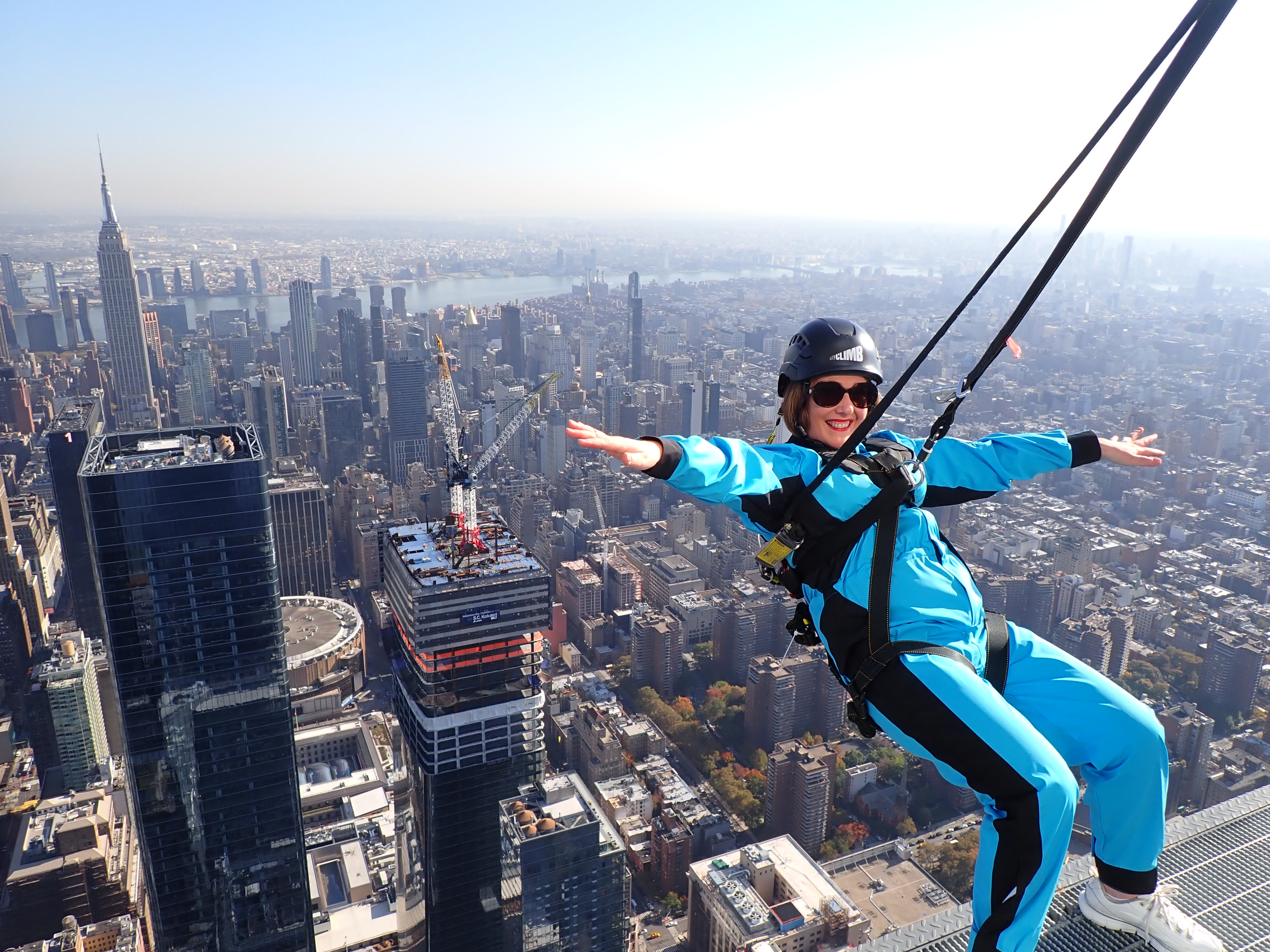 And what did we do when we got there? Hung over the edge of a giant skyscraper, of course.

Sun Travel’s Lisa Minot reveals what it was like at New York's terrifying new tourist attraction.

THE door swings open and my stomach does a backflip as I step on to the tiny platform.

The view is astonishing — New York in all its glory shimmers in the sunshine. I can see for miles. But it’s the thought of the drop thousands of feet to the ground that takes my breath away.

Clinging on to the cables securing me to the metal track snaking around the tiny shelf, I shuffle gingerly forward as he leans over and laughs: “It’s a long way down.”

Understatement of the year.

I am frozen in fear, some 1,190ft up in the air at the start of the new City Climb attraction at 30 Hudson Yards — a sparkling new skyscraper in Manhattan West.

Over the next hour, I’ll climb from the Basecamp platform some 161 steps on The Stair, an open-sided metal terror that will see me clamber up the side of the building.

And then at 1,271ft, I’ll find the courage to lean out of the side of the Apex platform.

I am in the first group to try this incredible attraction — the highest external building climb in the world — after it opened this week. It’s the big brother to Edge — the highest outdoor sky deck in the Western Hemisphere that jets out of the side of the 100th floor of the high-rise tower.

With its angled see-through walls and glass floor, there are views from Central Park, across Manhattan down to the World Trade Center site and to the Statue of Liberty and beyond. The City Climb takes you even further — to the summit of a building taller than the UK’s highest, The Shard. 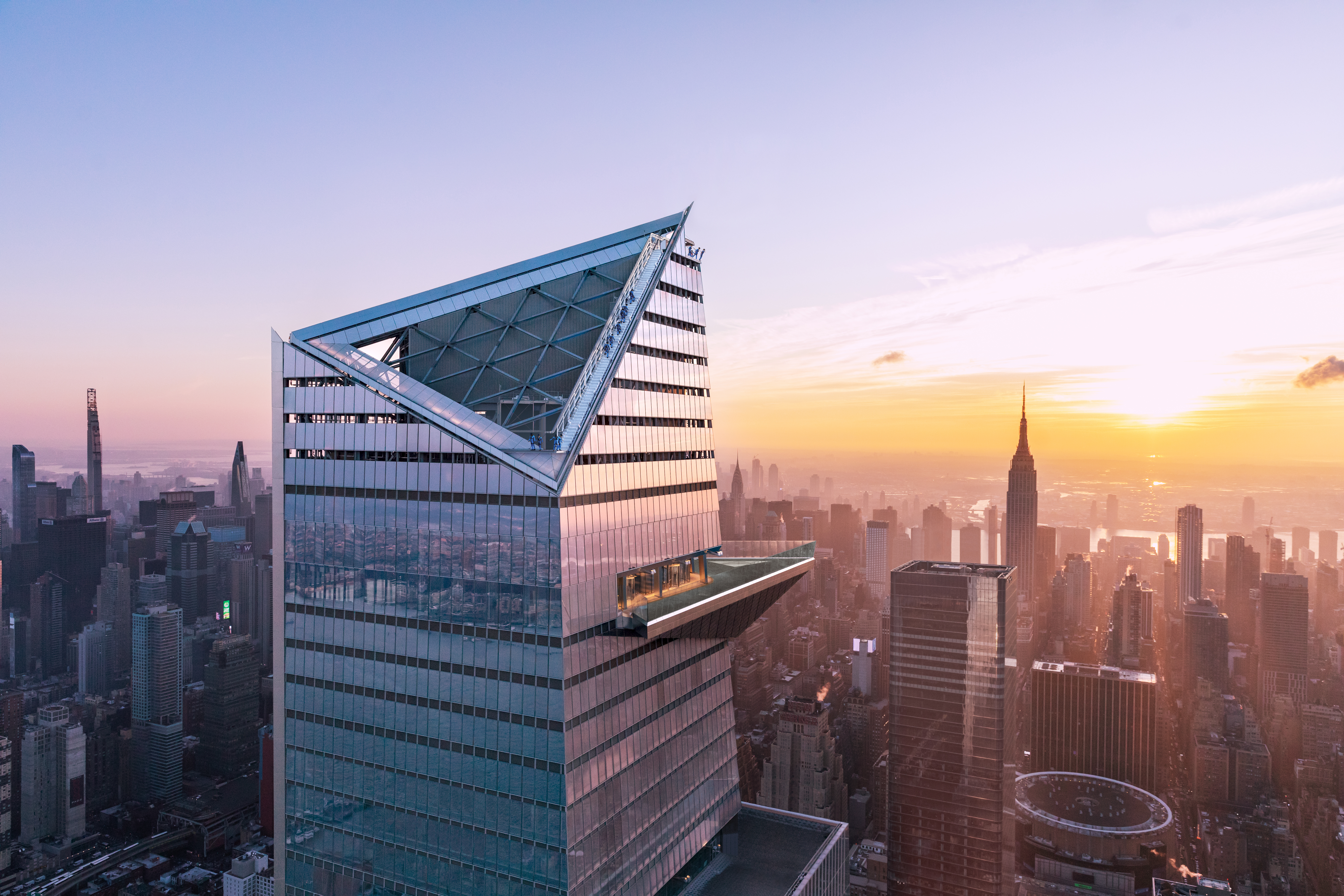 The two-hour experience is designed to help you conquer your fears. So much so that, after an hour climbing, we’d found the courage to lean out over the Apex and wave at those enjoying the Edge viewing platform below.

You’ll start by having your weight and height checked. You need to be between 4ft 9in and 6ft 7in and no more than 22st to qualify.

Then it’s up in the lift to the 100th floor to get kitted out. Here, we are introduced to our guides Youcef Merouk and Tony December, who issue us with jumpsuits.

Then we are strapped into custom harnesses and every piece of equipment is triple-checked. Finally connected to the metal track that will take us outside the building, there’s no way back. After climbing two or three flights of stairs dragging our cables connected to the track, we step out on to the Basecamp platform.

For me, this was the scariest moment. The metal grid floor gives terrifying glimpses of the ground far below and after the briefest glance over the edge, I was happy to hit the stairs where a handrail gives you something else to cling on to while ascending.

By the time we have reached the Apex, we are elated.

But the fear factor is ramped up again as we see the metal track we are fixed to goes around the far edge of the platform, forcing us closer to that drop.

Incredibly, we are looking down on the Empire State Building. Following instructions from our guides we push out over the edge, balancing on the tip of the platform for the perfect shot.

After 604 days, British tourists are finally welcome back to the Big Apple.

Get yourself to City Climb and take it all in on this brilliant experience. 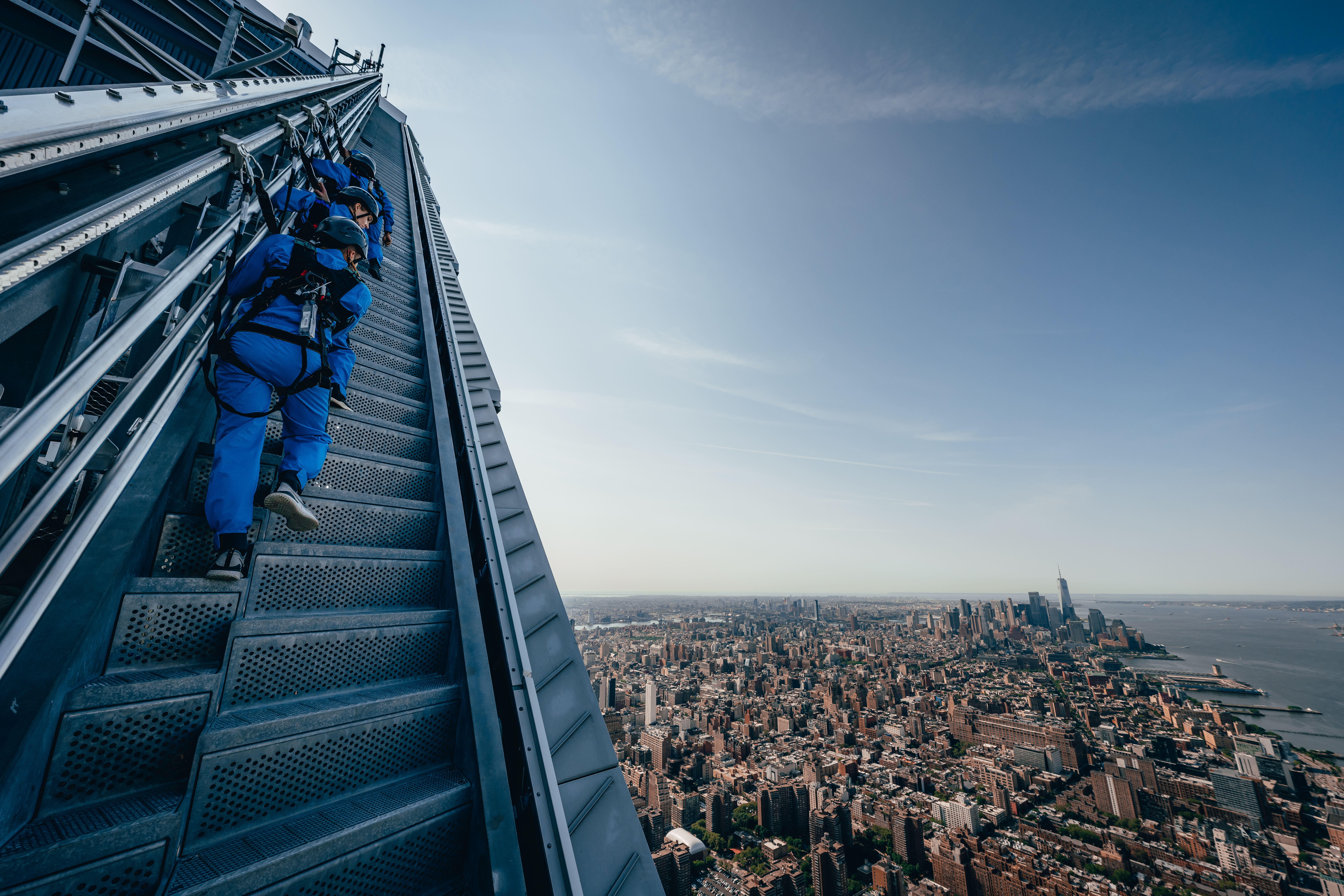 GETTING THERE: Virgin Atlantic flies direct to New York from Heathrow with return fares from £358.72 including complimentary food, drink and inflight entertainment. See virginatlantic.com or call 0344 8747 747.

STAYING THERE: Just minutes from Hudson Yards is the new Pendry Manhattan West, a luxury hotel with a California-chic vibe. Rooms start from £460 per night. See pendry.com

OUT & ABOUT: City Climb tickets are from £138 including entry to the Edge viewing platform and video and pictures of your climb. Ticket to the Edge are from £27 per adult and £23 per child, with a glass of champagne, tickets cost £39. See edgenyc.com.

The Sun Travel's Sophie Swietochowski checked out some of New York's most popular tourist landmark's in her first ever trip to the Big Apple.

THERE is wild cheering from the audience as the powerful final song rings out across the theatre.

Colossal lights swirl from the ceiling, passing over wide-eyed faces before swooping back to the stage. 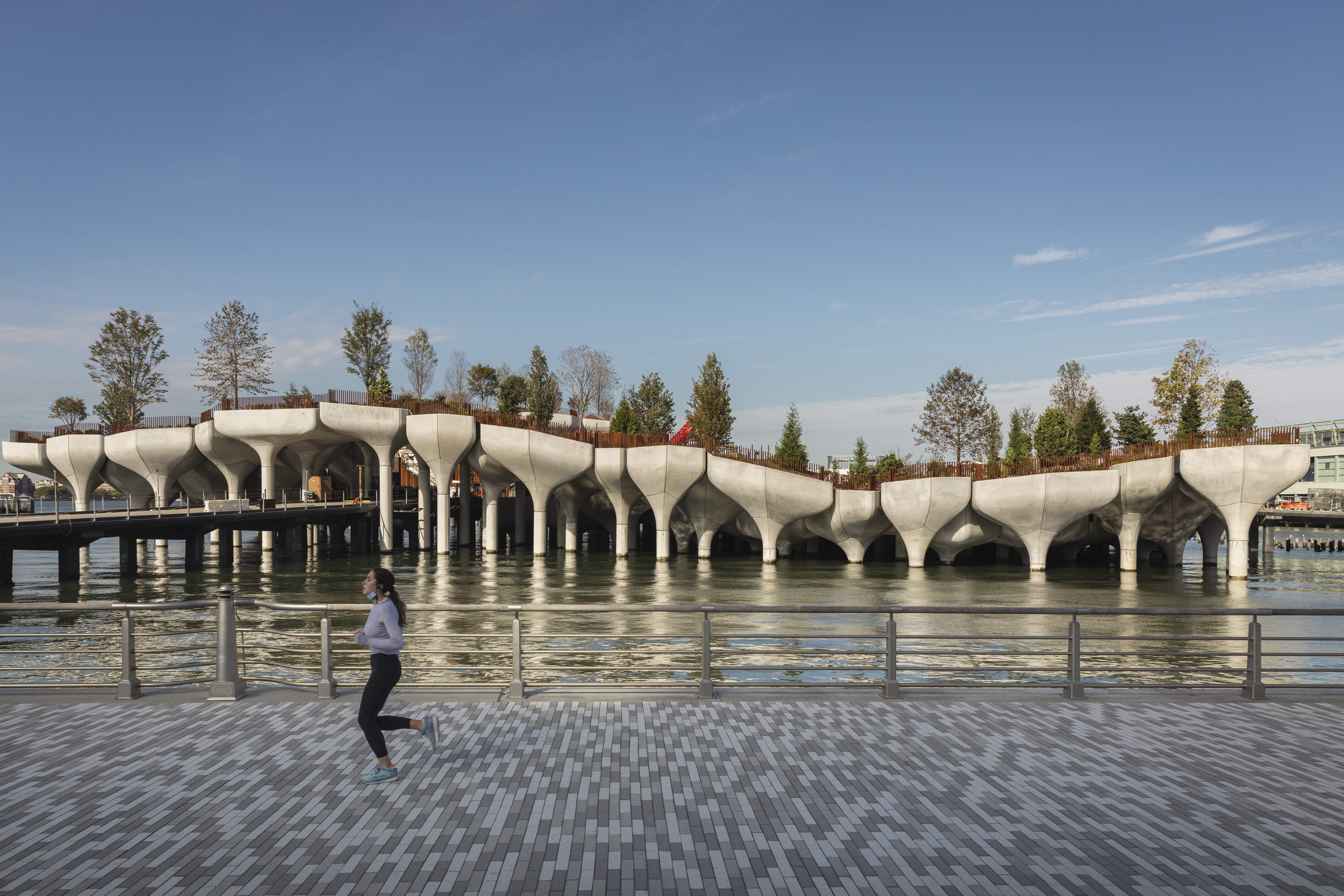 Theatres on Broadway have just reopened and at Ain’t Too Proud, which tells the story of legendary Motown group The Temptations, the atmosphere is buzzing.

The crowd, all wearing masks, launch out of their seats and dance to hit after hit alongside the swift-moving performers.

Shows here, such as Moulin Rouge and Tina, which is based on the life of singer Tina Turner, kicked back into action last month after a year and a half of closures.

Pounding the blocks around Times Square, it is hard to know if it is the lifting of the travel ban or that this is my first trip to the Big Apple that has created an unmistakable energy, as city-dwellers welcome British visitors back with open arms.

Eager to map out my bucket-list trip, I headed off to the Empire State Building to take advantage of its amazing panoramic views.

As darkness covers the city, I stare out and thousands of tiny yellow lights flicker from a mass of buildings below.

I checked into the Conrad in Midtown, which is a five-minute walk from the Empire State Building.

The 5H hotel is within easy distance of all the top attractions — from Central Park and the shops on Fifth Avenue to the Metropolitan Museum of Art and Rockefeller Plaza, where the festive ice rink has opened.

Stepping inside the all-suite hotel, a luxurious lobby oozes New York glitz and glamour and rooms have views of Central Park in a riot of autumnal colour.

With all the action right on my doorstep, I venture on to the streets of Manhattan, passing the department stores and the vans selling sugar-coated nuts.

Then I reach the trendy Meatpacking District, renowned for its quirky galleries, bars and restaurants.

From here, you can see man-made Little Island, a park propped up on space-age stilts jutting out into the Hudson River. This is one of the city’s newest attractions, created as part of the renovation of Pier 54.

Flower-lined paths weave through colourful shrubs and, throughout the park, kids are playing with interactive pieces of art that have been inspired by the river.

This isn’t the only new attraction returning British tourists can discover.

Over in Brooklyn, thrill-seekers will be itching to have a go on Coney Island’s newest ride, the twirling Phoenix rollercoaster. 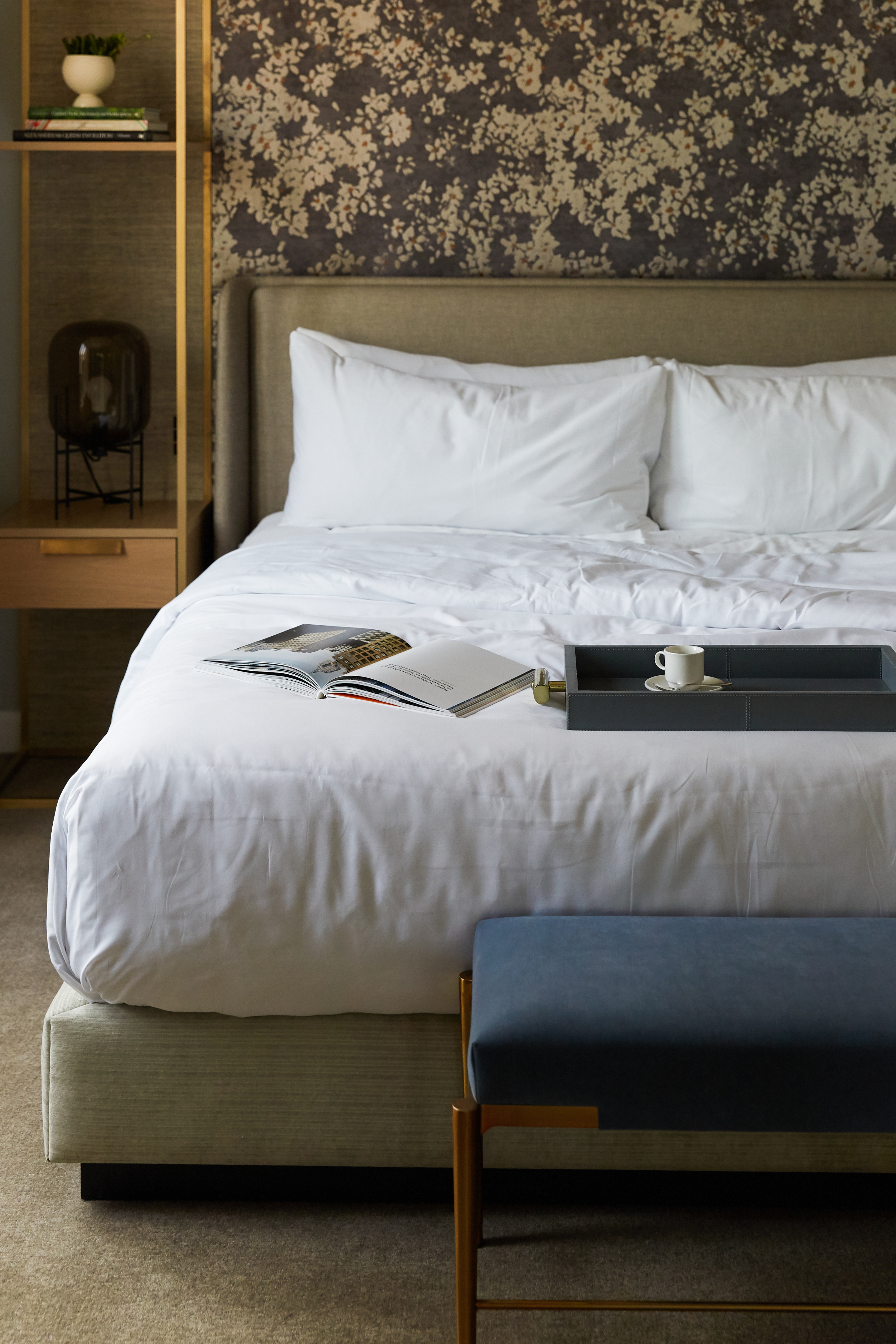 There are new restaurants opening, including the Southern-inspired Hudson Smokehouse, which sits across from Third Avenue Bridge and serves barbecue dishes such as smoked-beef brisket and spicy chicken wings.

As we spill out from the theatre on to the busy streets, the top of the Empire State Building glows against the night sky.

They are red, white and blue, perhaps a symbolic gesture welcoming us back.

GETTING THERE: British Airways flies up to eight times a day from London to New York from December, with fares from £343pp. See britishairways.com.

STAYING THERE: Three nights’ room-only at the 5H Conrad New York Midtown is from £969pp, including flights on selected dates in February. See britishairways.com/new-york.

OUT & ABOUT: Entry to Little Island is free, although some exhibitions are ticketed. See littleisland.org. To find out what’s new, see nycgo.com.