The Turquoise Riviera – the last untapped corner of the Med: Beyond the tourist traps, discover the hidden bays and ancient sites of south-western Turkey

We’ve dropped anchor on a sea that dazzles with all the shades of a peacock – royal blue, iridescent azure and shimmering emerald.

After sailing out from Kalemya Bay, just outside Fethiye, we’re alone at Aquarium Cove, one of Turkey’s best dive spots. It’s too tempting not to jump in, for just under the surface is a 95ft-deep cavern where a shaft of light illuminates the wondrous rainbow-coloured coral.

This sweep of coastline, dubbed the Turquoise Riviera, has an undiscovered quality. Later, perched on deck, we watch the sun streak its copper rays across the sky and it certainly feels as if we’ve found the last untapped corner of the Med. 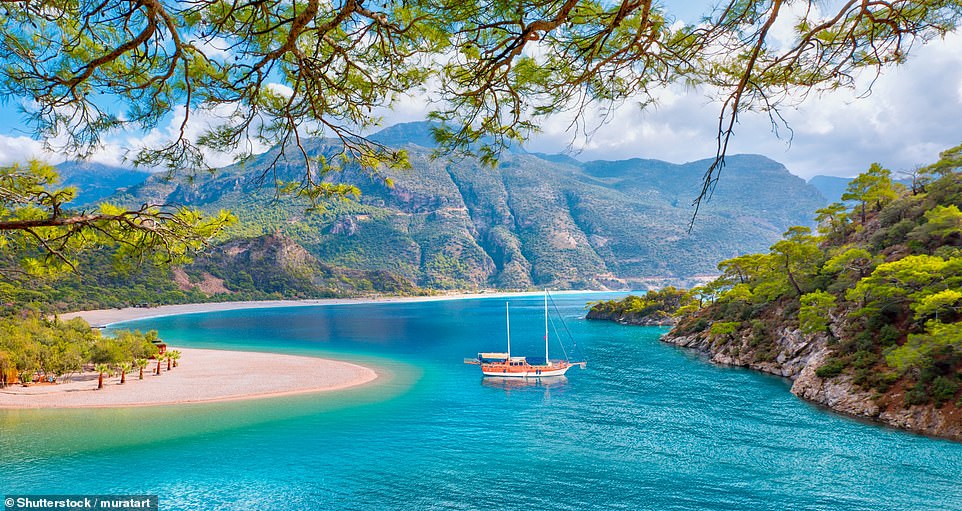 In reality, Turkey’s south-west coastline may be well frequented by holidaymakers but is still largely untouched by mass tourism.

‘All along the 600 or so miles that make up the Turkish Riviera you can find unspoilt beaches, secret coves and pretty coastal villages,’ says Michael Fleetwood at SevenTravel, a company that specialises in finding locations ‘beyond the guidebook’ (seventravel.co.uk).

As evening descends, we head back to Kalemya and the Hillside Beach Club, a resort on its own crescent-shaped beach with rooms terraced into the cliffs. While you can hear English, Italian and German accents all around, the hotel also attracts many well-heeled Turkish guests. 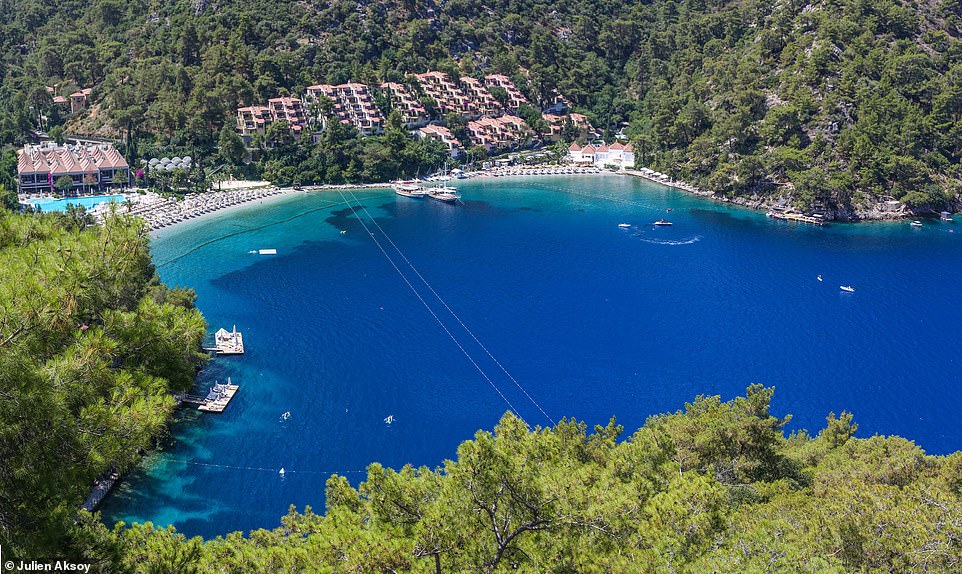 Pristine: Angelina checks into Hillside Beach Club (pictured above), a resort on its own crescent-shaped beach 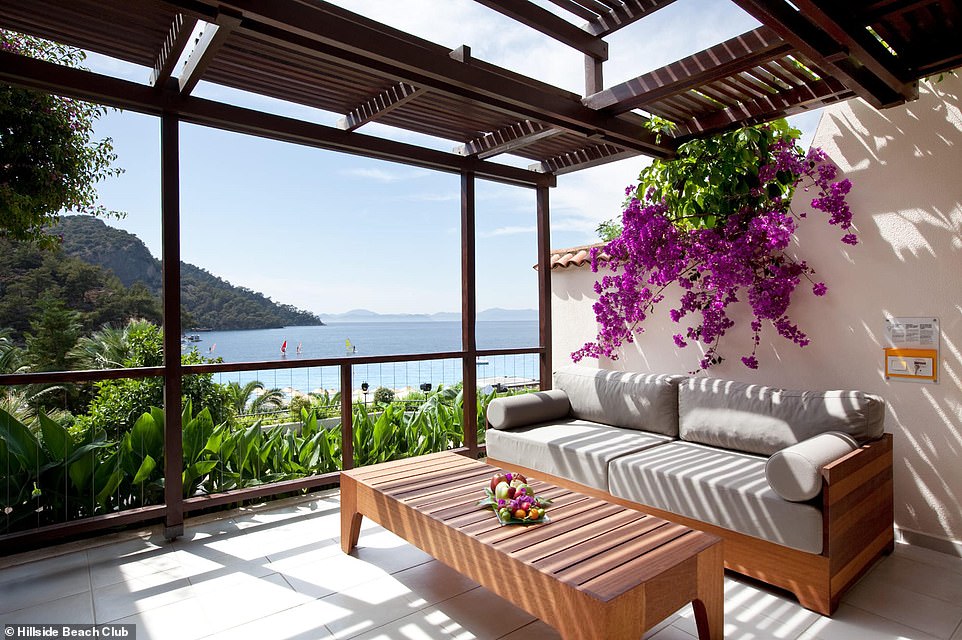 Rooms at the Hillside Beach Club are terraced into the cliffs. ‘While you can hear English, Italian and German accents all around, the hotel also attracts many well-heeled Turkish guests,’ says Angelina 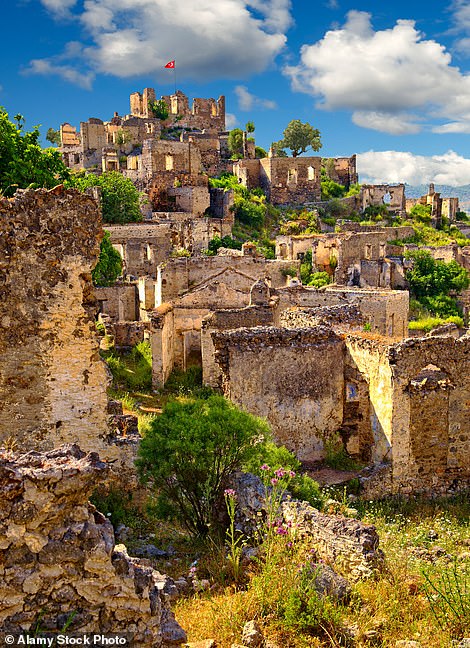 Angelina visits Kayakoy, a ‘ghost’ village made up of eerie ruins (pictured)

One of the experiences offered by the resort is a trip to Kayakoy, a ‘ghost’ village made up of eerie ruins which overlooks undulating pine forests tumbling down to the sea. Originally called Levissi, the town was home to some 6,000 Greeks until 1923 when the ‘population exchange’ after the war between Greece and Turkey forced its inhabitants to leave. It’s been left intact as a reminder of this dark patch of history.

In fact this region has an abundance of ancient sites, but for more intrepid travellers the Lycian Way, a hiking trail that stretches some 300 miles from Fethiye to Antalya, provides a showcase for many of the area’s highlights.

The route also passes close to Butterfly Valley, a nature reserve with a cascading waterfall accessible only by boat from Oludeniz. It is home to some 100 species of butterfly, and millions of the colourful creatures can be seen fluttering around.

After a day of exploring, you can shake off the dust at Hillside Beach Club’s Sanda Nature Spa.

Tucked away amid pine and carob trees, it overlooks the resort’s Silent Beach where, with no phones or children allowed, all you’ll hear are waves lapping against the shore and wind rustling in the trees. 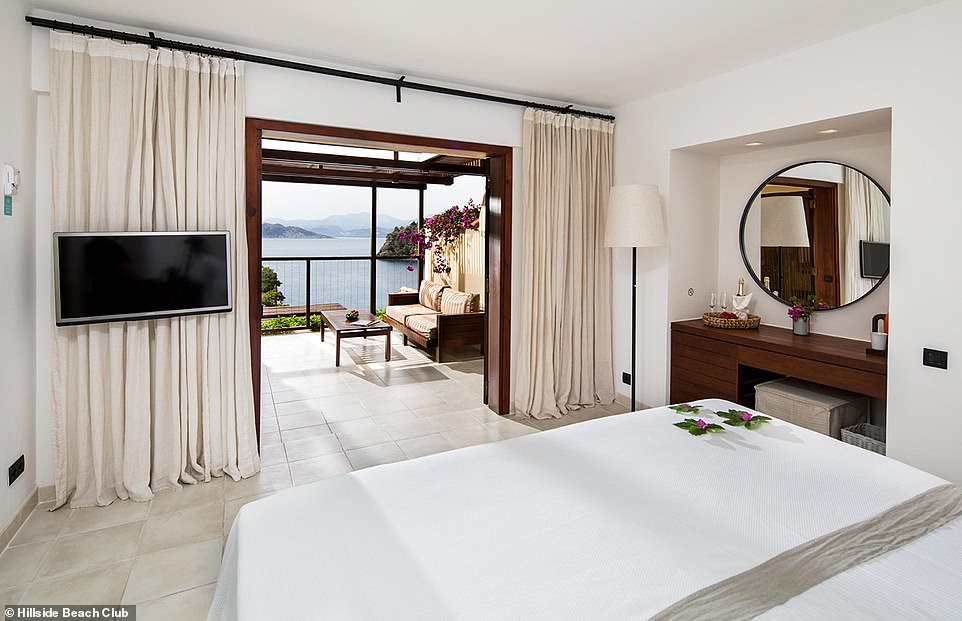 Hillside Beach Club ‘captures the essence of a laid-back holiday spirit’, according to Angelina. Above is a double room with a private terrace 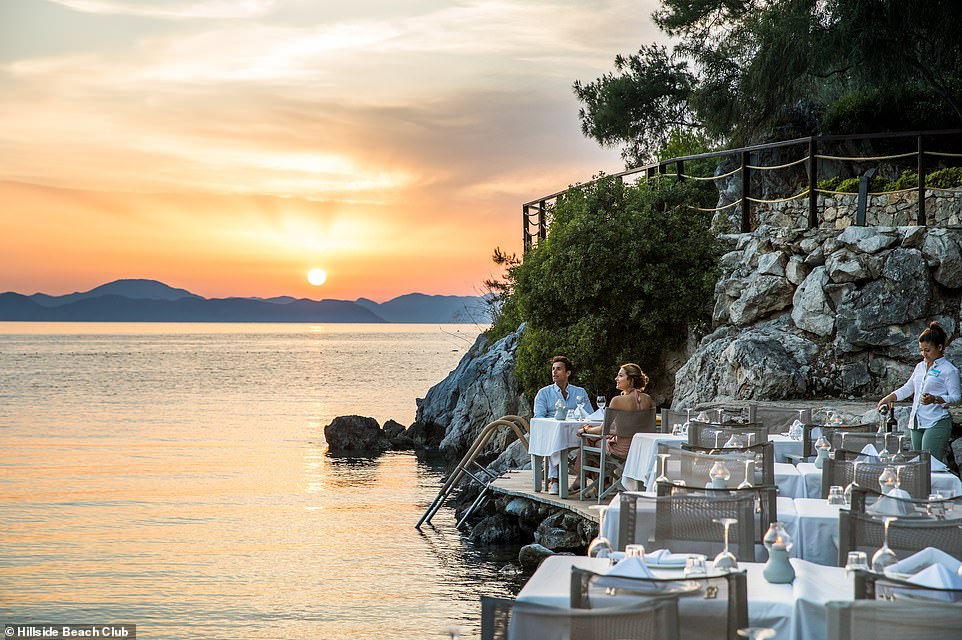 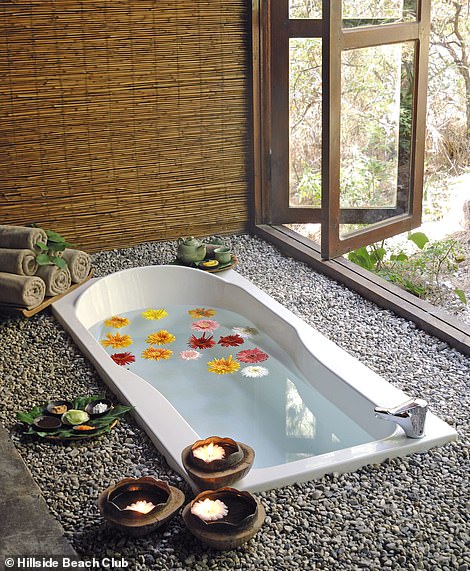 Here you can enjoy a traditional Turkish hammam, or opt for treatments inspired by age-old Aegean techniques and ingredients, such as the lemon honey facial. The resort also offers a selection of sporting activities, such as paddleboarding, tennis and volleyball.

Dining at Hillside is another highlight. At Pasha On The Bay, where you eat on the beach by candlelight, the menu is locally inspired. The series of mezze dishes includes ezme (tomato salad with lemon juice and pomegranate molasses), goat’s cheese dripping in honey, white bean salads and silky aubergines sprinkled with feta.

Each morning there is yoga at Silent Beach, after which you can start your day with a traditional Turkish ‘Kahvalti’ breakfast of cured meats, local cheeses, borek pastries and eggs served in a copper skillet known as a sahan. The choice is vast, so you can also tuck into local yogurts, just-baked breads spread with rosemary-infused honey, as well as freshly made omelettes.

Fethiye town is a 20-minute drive away, so is easy to dip into. As you leave the hotel you’ll pass through a working shipyard where the skeletons of half-finished yachts on stilts give a glimpse into the importance of the area’s seafaring heritage. 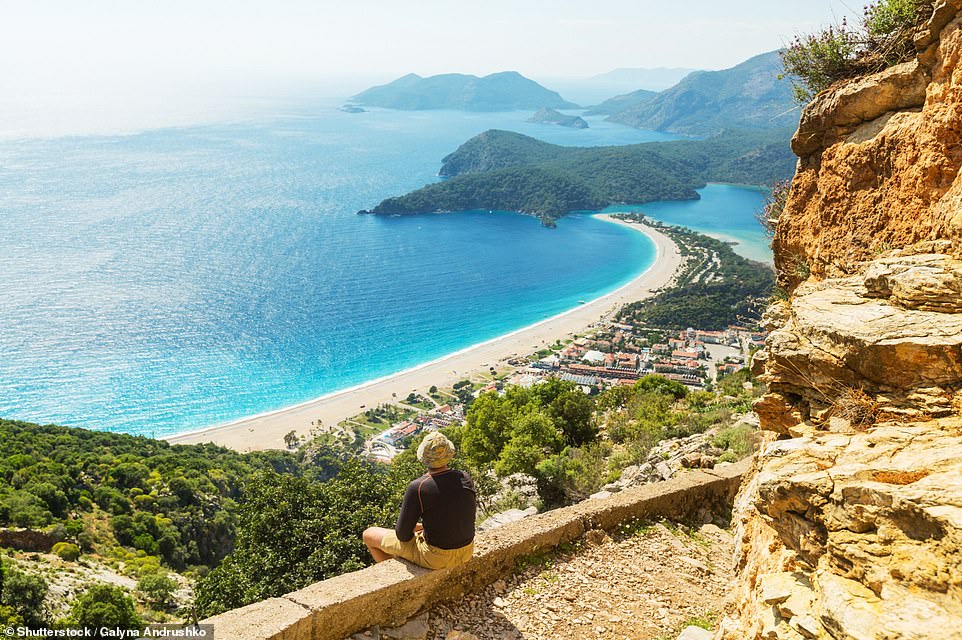 The bustling bazaar (on Tuesdays and Fridays) takes you into the heart of the old town. Look out for striped cotton hammam towels, aromatic oils laced with citrus, rose and myrtle and brightly painted crockery to take back home.

Hotel Unique places you in the heart of Fethiye. Carved out of a series of 150-year-old townhouses, the intimate property has just 19 rooms, each with its own design and original features, with prices from £106 per night (hoteluniqueturkey.com).

Or there is Yazz Collective, a boutique hotel found on Turunc Pinari, one of Fethiye’s most idyllic coves and accessible only by boat. The organic architecture matches the sustainable ethos of the retreat. As well as local art displayed in its Faar Gallery, there’s a menu created with local produce and cooked over an open fire. Rooms start from £385 per night (yazzcollective.com). 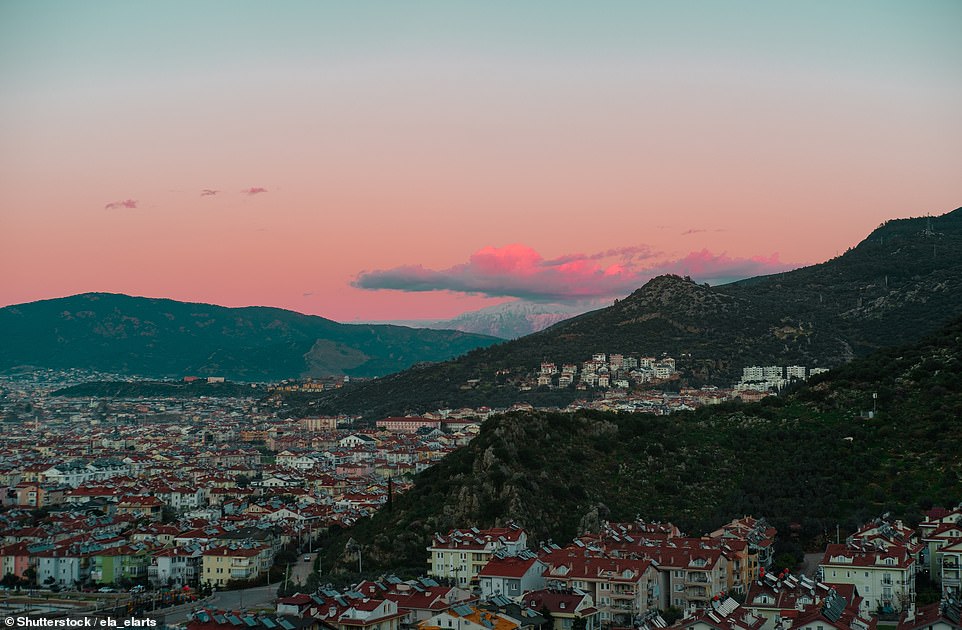 Angelina visits Fethiye, pictured, where there’s a bustling bazaar twice a week in the heart of the old town. ‘Look out for striped cotton hammam towels, aromatic oils laced with citrus, rose and myrtle and brightly painted crockery to take back home,’ she says 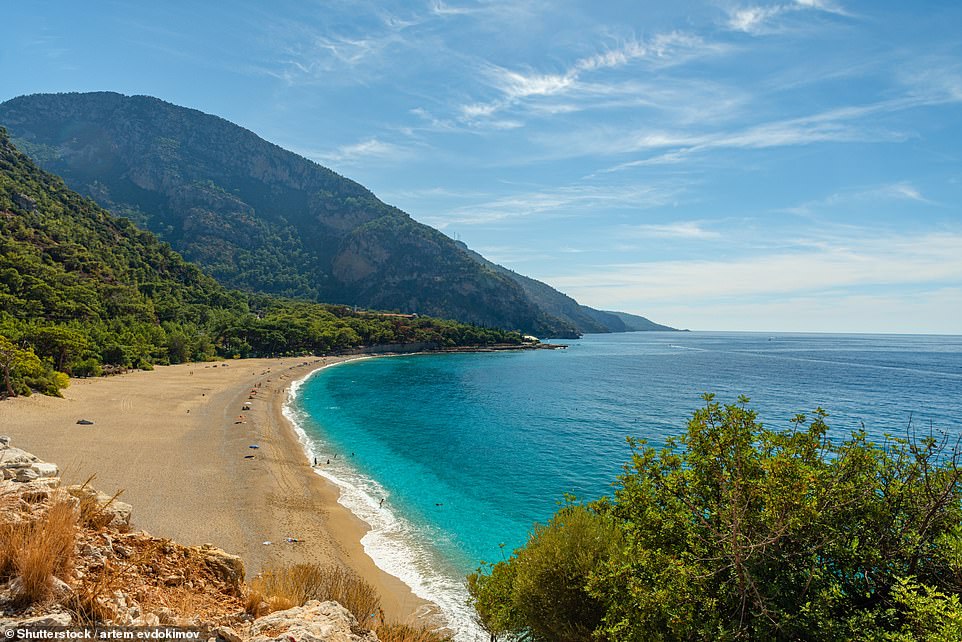 There are plenty of flawless beaches to discover near the Hillside Beach Club, such as Kidrak Beach (above), known as Paradise Beach due to its icing-sugar sands

Meanwhile, the days unfurl gradually at Hillside Beach Club. The whitewashed rooms, with breezy terraces overlooking the bay, give cool respite from the heat outside.

While there are plenty of flawless beaches to discover nearby – such as Kidrak Beach, known as Paradise Beach due to its icing-sugar sands – the resort’s Serenity Beach is ideal if you just want to stay put. Found in the next bay along from the hotel, you can reach it by following a nature trail across the cliffs or by hopping on a charming sailing boat that takes guests over at intervals during the day.

For refreshments, there’s a cocktail bar and tiny restaurant serving a simple daily menu. It captures the essence of a laid-back holiday spirit.

Angelina Villa-Clarke was a guest of Hillside Beach Club, where rooms start from £322 per night based on two sharing on a full-board basis (hillsidebeachclub.com/en).