This should definitely save on fuel costs.

Singapore Airlines has abandoned an idea to put passengers on “flights to nowhere” — i.e., short plane rides that take off and land at the same airport — in favor of simply sitting guests on a nonmoving Airbus A380 and serving up some dinner.

The national carrier of Singapore announced Tuesday that it will be offering three new “experiences” for customers who are based in Singapore, including the chance to enjoy the airline’s signature dishes inside a double-decker A380, the world’s largest passenger aircraft.

Additional “experiences” include the family-friendly tours of the Singapore Airlines training facility, to start in late November, and the new SIA@Home meal kits, for those who want to try recreating the airline’s cuisine at home.

“With Covid-19 drastically reducing the number of flights operated by the SIA Group, we have created unique activities that would allow us to engage with our fans and customers during this time,” explained SIA Chief Executive Officer Goh Choon Phong in a press release. “These experiences offer something for everyone — from frequent flyers who miss our world-class in-cabin products and service, to couples and families who want an exclusive dining experience, and parents who are after an enjoyable activity-filled day with their children during the school holidays.” 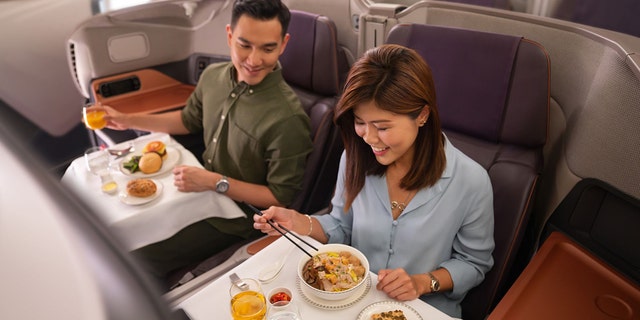 Guests who book a seating at the pop-up will also be treated to a tour of the A380, take-home souvenirs and access to the airline’s in-flight entertainment options while dining.
(Singapore Airlines)

Singapore Airlines introduced its new suite of experiences after abandoning an idea to begin operating “flights to nowhere,” wherein passengers would be able to buy tickets for a ride in a Singapore Airlines aircraft that would take off and land back at Changi Airport.

The idea, which already proved quite popular when Qantas tried it, was ditched following scrutiny over the environmental impact and carbon footprint of the “nowhere” flights, Singapore’s Today Online reported.

Instead, Singapore Airlines is now hoping that its new “experiences” — and especially its Restaurant A380 — will prove just as popular. To sweeten the deal, guests who successfully reserve a space during the limited-time event (seatings are currently only planned for Oct. 24 and 25) will be also be treated to a tour of the A380, take-home souvenirs, and access to the airline’s in-flight entertainment options while dining.

"Restaurant A380" will operate out of an Airbus A380 parked at a gate in Singapore’s Changi Airport.
(eXm Company/H. Goussé/Singapore Airlines)

If recent history is any indication, fans should expect Restaurant A380 to be booked straight away: Thai Airways recently debuted a pop-up restaurant at the carrier’s Bangkok headquarters, and it was so popular that the company is planning additional pop-ups at the airline’s Silom and Larnluang offices.