Walk away your worries: The Easter weekend is the perfect time to start planning a holy hike — and any of these enlightened trails might just change your life

The modern pilgrim is not necessarily a Christian. Many are people wishing to escape the digital age and re-engage with nature for a while.

Others may simply be seeking the meditative, therapeutic value of a long walk. 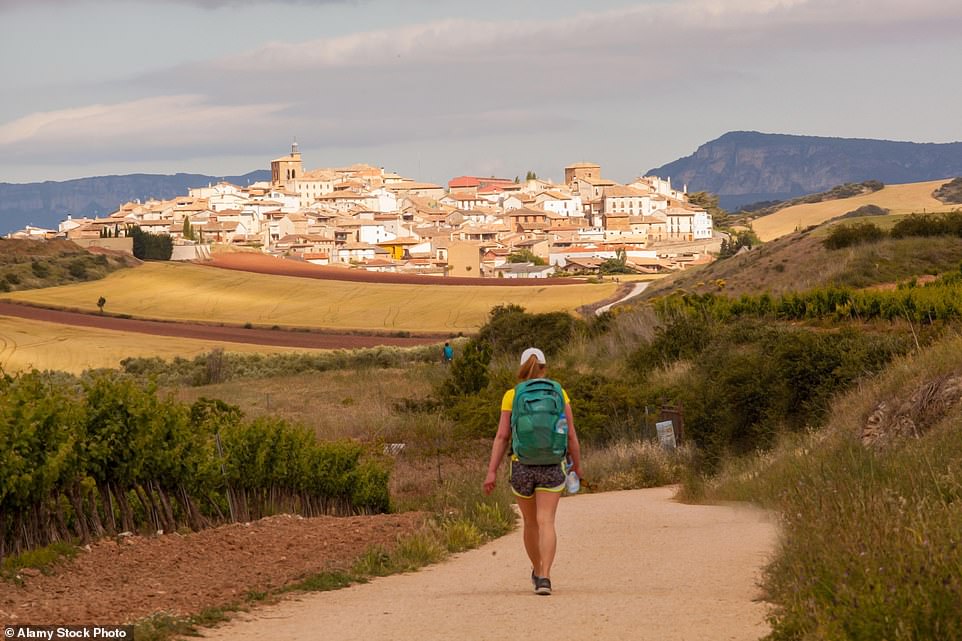 Best foot forward: A pilgrim on the Camino nears Cirauqui in Spain 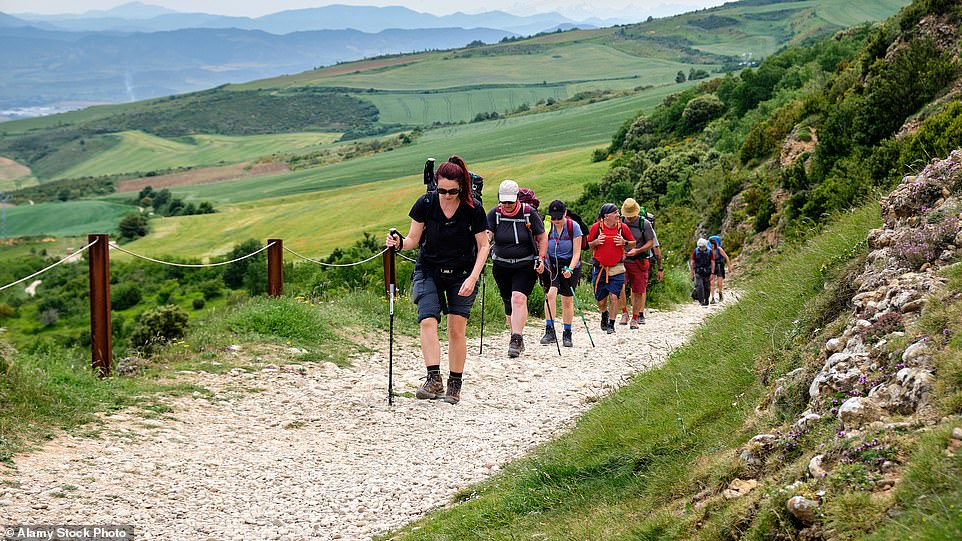 There are numerous routes on the trail including the original Camino Primitivo, which involves walking 195 miles over 16 days

THE ARCHBISHOP OF YORK ON THE JOY OF WALKING

Someone once said that Jesus changed the world at three miles an hour. What they meant was, he walked everywhere. And as he walked, he talked and healed and encouraged and blessed.

If you traced his journeys on a map, they wouldn’t make much sense. He was all over the place. He wandered across Palestine, led, I suppose, by the breath of the Spirit.

But some of his journeys were pilgrimages. He would go to Jerusalem for the major festivals.

Since then, Christian people and people of all the great religions of the world, also go on journeys to their holy places to rekindle their faith and get back in touch with that most basic reality of all, namely that life itself is a journey. 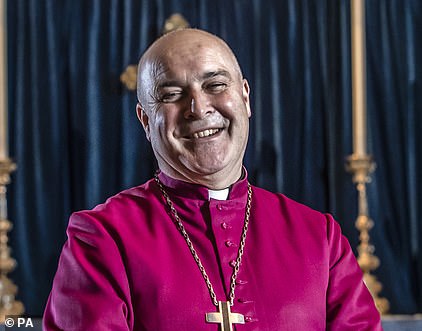 There is nothing particularly religious about this observation. We all know that the journey of life begins when we are born. We all know it ends when we die.

As we get older, we become increasingly aware that there is more road behind us than ahead of us. Such is the human lot.

But faith makes a difference. It teaches us that the journey of life, which ends in death, can become a holy pilgrimage that leads through death into life with God.

This, of course, is the Easter message. Mary Magdalene went to the tomb on the first Easter morning with the intention of anointing a corpse. She found the tomb empty and the stone rolled away. She was the first person to encounter the risen Christ. She didn’t recognise him at first — she thought he was the gardener — but she was actually face to face with a reality that is beyond the reality we usually see around us, and now it had come to meet her in the person of Jesus Christ.

The direction of her life was changed in that moment. Her life became a pilgrimage.

And so Christian people, and people of other faiths, and many other people of goodwill who just want to get in touch with some of life’s more basic realities, set out on a pilgrimage.

It is massively increasing in popularity. New pilgrim routes are opening up each year.

I myself have walked to Canterbury and Walsingham and Glastonbury and York. I have walked the great Camino to Santiago de Compostela. In a few weeks I plan to walk St Cuthbert’s Way from Melrose to Holy Island.

And when I make these journeys, I remember that my life is a journey home. I learn how to travel light. I learn to appreciate what is around me and in front of me in every step. I learn to be more vulnerable to the people I meet and the things I see.

I learn that I can’t always choose my fellow travellers. That we are in this together. I learn to receive hospitality. I look to encounter God. In each step of the way I learn how to be led.

Walking even helps me think. It was Rousseau who once commented: ‘I can only meditate when I’m walking. When I stop, I cease to think; my mind only works with my legs!’

When we walk we inhabit the world differently. In her book Wanderlust, the American writer Rebecca Solnit puts it this way: ‘The mind, the body and the world are aligned, as though they were three characters finally in conversation together, three notes suddenly making a chord.’

We urgently need to learn how to tread lightly on the Earth and to live in greater harmony with our world and with each other. Neither of these can we do on our own. We need each other and we need a vision that serves the common good.

So as our world re-sets, and as we, thankfully, pass beyond Covid, we need to learn how to think differently and to live more simply. Perhaps going on a pilgrimage would help us. Perhaps we all need to slow down to God’s pace and change the world at three miles an hour.

The Archbishop of York Stephen Cottrell

The most famous of all pilgrimages, the Camino is also known as the Way Of St James, as it ends in the Spanish town where James the Apostle is said to be buried. It now attracts 330,000 pilgrims a year, up from fewer than 2,000 in 1986.

There are numerous routes, from the original Camino Primitivo, which involves walking 195 miles over 16 days, to the Via de la Plata, 610 miles over 49 days.

Given that we live in a time-poor culture, the relatively short Camino Ingles (English Way) is increasingly popular. Historically the route taken by British seafaring pilgrims, it starts at the northern Spanish ports of either Ferrol or A Coruna and passes through marshland, farmland, forest and across rivers en route to Compostela.

It stretches about 50 miles (from A Coruna) or 75 miles (from Ferrol) and qualifies the walker for a compostela, the certificate that proves you have completed the Camino. To get one, though, you must obtain a credencial (pilgrim passport) that needs to be stamped at hostels, cafes and churches along the route.

How to do it: London to A Coruna, via Barcelona, from £112 return (Vueling.com). Santiago Ways offers half-board accommodation and luggage transfer between stages from £385 pp (santiagoways.com).

The Jesus Trail, Nazareth to Capernaum

While many Christian pilgrimage routes have been walked for centuries, one that covers the area where Jesus grew up was only established in 2009. It starts in Nazareth, where Christ grew up, and ends at the ruins of Capernaum, where he lived in adult life.

The route takes in many important Christian sites, including that of Jesus’s water-into-wine miracle at Cana.

How to do it: London to Tel Aviv from £182 return (easyjet.com). Abraham Tours offers accommodation and luggage transfers from £825 pp (abrahamtours.com).

The Tagus Way, Lisbon to Fatima

This route will take you to the Shrine to Our Lady of Fatima, erected to mark visions of the Virgin Mary seen by three shepherd children in 1917.

Named after the River Tagus, the Fatima pilgrimage starts at the cathedral in Lisbon. For the first three days you have the river as a backdrop.

The final two stages take in the plateaus, mountains and valleys of the Sierra de Aire and Candeeiros Nature Park, the caves of which are a magnet for speleologists.

On day five you arrive at Fatima, where there are two basilicas, two chapels and a monument to the Sacred Heart of Jesus.

How to do it: Stansted to Lisbon from £20 return (ryanair.com). Accommodation and luggage transfers from £550 pp (travelnet.ie).

Via Coloniensis, Cologne to Trier

The Via Coloniensis is just one of about 30 major routes used by German pilgrims ultimately heading for Santiago de Compostela.

It runs between two of Germany’s key Roman cities, passing through rolling countryside and woodlands.

The journey begins in Cologne, and highlights along the route are the spa town of Bad Münstereifel and the medieval town of Blankenheim.

Trier has well-preserved Roman monuments such as the 2nd-century gate Porta Nigra, the Basilica of Constantine, the Cathedral of St Peter, and the Church of Our Lady.

How to do it: London to Cologne from £26 (ryanair.com). B&B and camping options en route, but for a treat stay at the Hotel Marielle in Bad Münstereifel, doubles from £84 a night (hotel-marielle.de).

This route, which was only opened officially in 1996, runs from Melrose in the Scottish borders, where St Cuthbert spent his formative years as a monk in the 7th century, to Holy Island, where he ended his days as Bishop of Lindisfarne.

The man who became the patron saint of Northumbria gained a reputation as a healer and people flocked to his burial place after his death.

His remains became so sacred that when Vikings attacked the island in AD 75, monks hid his allegedly uncorrupted body in caves and forests for seven years.

Pilgrims pass St Cuthbert’s Cave, which has religious graffiti, some of it centuries old, carved into the sandstone rocks.

It was here that the monks of Lindisfarne are said to have rested overnight on the way to Durham Cathedral, where Cuthbert was reinterred. 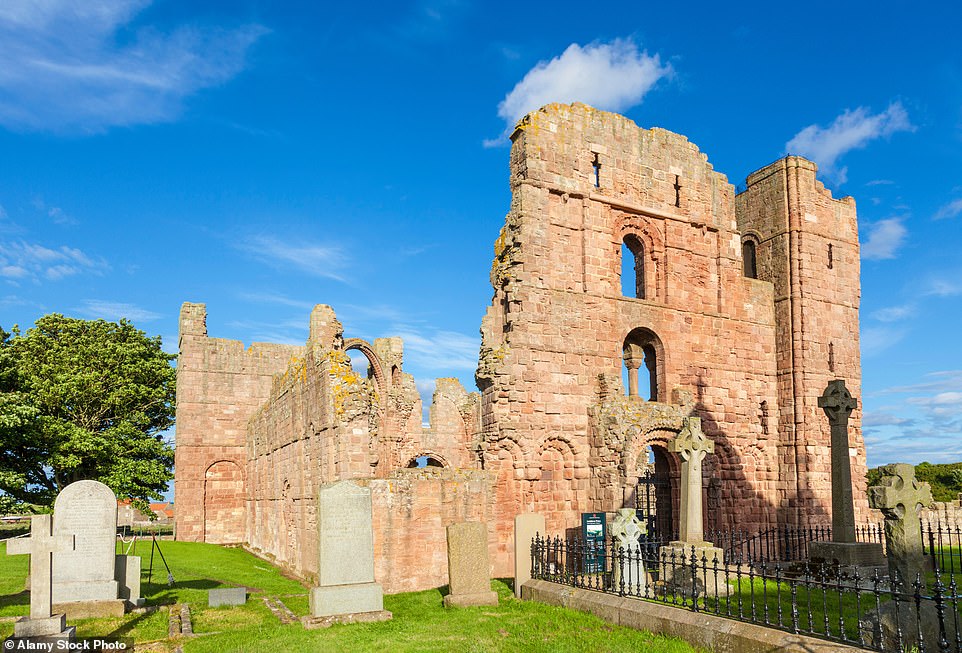 How to do it: Accommodation and luggage transfers from £690 pp (sherpaexpeditions.com).

This walk starts at the Sanctuary of La Verna in Tuscany.

After a hike through the Casentinesi Forests, pilgrims reach the gentler hills of the upper Tiber Valley in Umbria, and then Gubbio, the place of St Francis’s first pilgrimage. 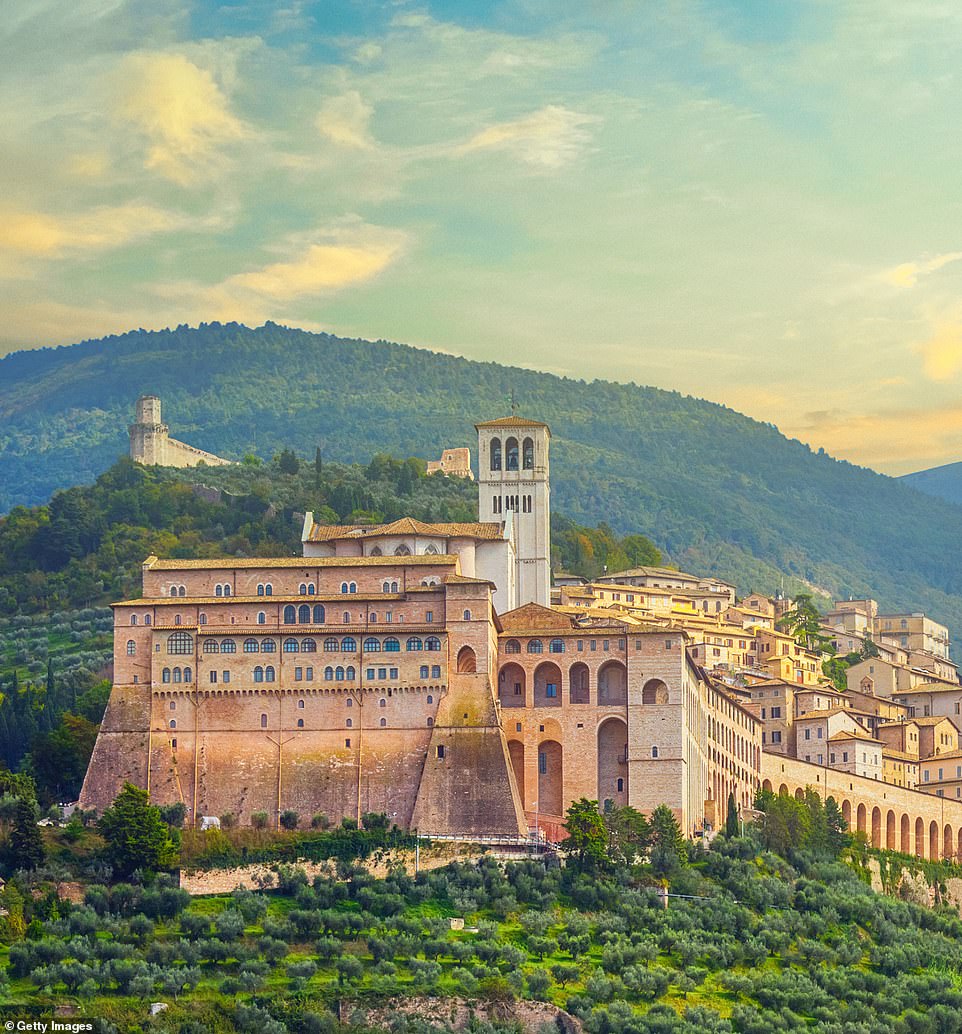 Soul-searching strolls: The Basilica of St Francis of Assisi dominates the Umbrian landscape

The journey ends at the Basilica of St Francis of Assisi, an opulent memorial to a simple man who is now known as the patron saint of ecologists.

How to do it: London to Florence from £59 return (vueling.com). Accommodation and luggage transfers from £520 pp (umbriafrancescosways.eu).

Via Francigena, Lausanne to Aosta 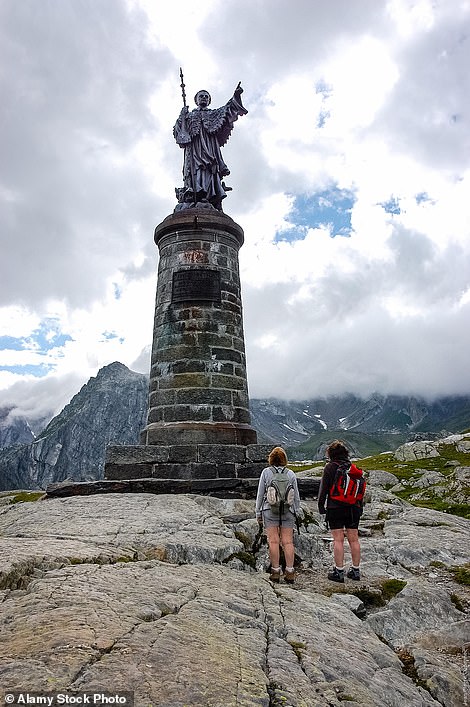 Hikers standing on the monument at Great St Bernard Pass

The original Via Francigena, or Way Through France, ran from Canterbury to Rome.

Sigeric the Serious, the 10th-century Archbishop of Canterbury, travelled it in 990, and wrote down his itinerary on his return.

But few modern travellers will want to walk the full 1,000 miles.

One of the most picturesque stretches runs from Lausanne on Lake Geneva, through the Great St Bernard Pass to Italy’s Aosta Valley.

How to do it: London to Geneva from £53 return (easyjet.com). Accommodation from £880 pp and luggage transfers of one bag £275 (francigenaways.com).

Canerbury Cathedral became England’s most important centre of pilgrimage after four knights murdered its Archbishop Thomas a Becket there in 1170. He was hailed as a martyr and canonised in 1173.

The route today passes through vineyards, lavender fields and orchards.

How to do it: Accommodation and luggage transfers from £1,569 pp (responsibletravel.com).

When the 7th-century noblewoman Winefride was decapitated by her suitor Caradoc after she told him she was to become a nun, legend has it that a healing spring appeared at the spot where her head fell.

St Winefride’s Well, below the town of Holywell, has been a place of pilgrimage ever since.

One pilgrims’ route leads to Bardsey Island: St Leuddad is reputed to have said that no one who died there would go to Hell.

How to do it: Wales Walking Holidays offers luggage transfers for the middle of the route (waleswalkingholidays.com). Walkers should make their own accommodation arrangements.