From marching up mountains in Scotland to strolling across Surrey with llamas, it’s time to pull on your boots and… amble into awesome autumn

Crisp autumnal days were made for country walks. Add a pub with a crackling fire and a welcoming room to snuggle up in after your exertions, and you have all the ingredients for a cosy weekend escape.

These pubs all have great walks that start the moment you step outside their door.

A WILTSHIRE INN WITH GRANNY CHIC 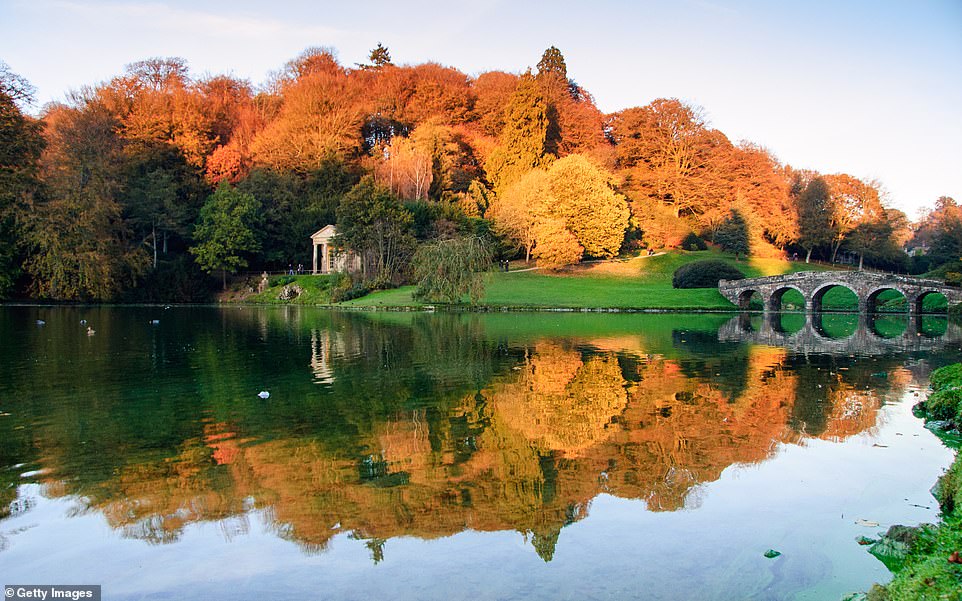 Seasonal wonders: The grounds of the 2,650-acre Stourhead estate in Wiltshire

Wiltshire’s 2,650-acre Stourhead estate is home to both a Palladian mansion surrounded by beautiful landscaped gardens and to the Spread Eagle Inn. The latter may not have a Regency library or Chippendale furniture – its five bedrooms are more granny chic than 18th Century elegance – but it’s a cosy base from which to explore the National Trust estate.

No one bats an eyelid when you tramp muddy boots over the flagstone floor. Pub classics on the menu include the excellent Wiltshire ham, fried egg and chips.

Packed lunches can be provided.

Walk: Take the two-hour circular hike past an Iron Age hill fort to King Alfred’s Tower, a 160ft folly built on the spot where Alfred the Great was said to have rallied his troops before a battle in 878.

A TOAST AFTER A HIGHLAND HIKE 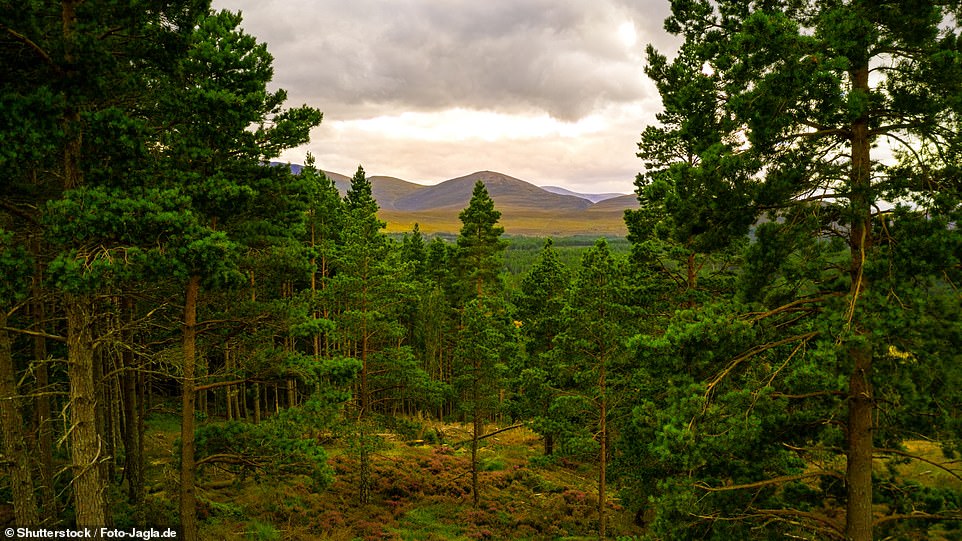 Ramble on: A beautiful view over the Cairngorms National Park in Scotland

Just because you’re staying in the middle of the Cairngorms National Park doesn’t mean you can’t enjoy a bit of style. Cue the Fife Arms in Braemar, which is stuffed full of Victoriana and art – a Picasso hangs in the drawing room – and offers 46 sumptuous bedrooms.

A pamphlet details all the nearby hikes. Get the kids and dog out on a 30-minute loop, or try an all-day guided tramp that takes in a couple of munros (the Scottish name for a small mountain).

Return to toast your success with a choice of more than 180 whiskies in the bar.

Walk: The good news about climbing 2,818ft Morrone from Braemar is that you start at an altitude of 1,112ft. The four-hour circular route heads through a protected birch wood.

PET PARADISE IN THE HEART OF EAST ANGLIA

With a menu for pampered pets that features such delicacies as venison jerky and alcohol-free Bottom Sniffer Beer, snug night blankets and fields to run around in, the Three Blackbirds in Woodditton, Cambridgeshire, is ideal accommodation for hounds.

But humans are also well catered for, with an extensive menu showcasing a great selection of vegetarian and vegan dishes served in the beamed dining room.

Walk: Stretching seven miles from Woodditton to Reach, Devil’s Dyke is an Anglo-Saxon fortification with a footpath on top. Make a day of it and recharge at the Dyke’s End pub at Reach, or cut the walk short on a circular trail.

TAKE IN ALL OF THE DRAMA OF POLDARK’S CORNWALL

You’ll see Bottallack tin mine in Cornwall, above, which featured in the BBC’s Poldark on a four-hour walk to Land’s End

Walk ten minutes from the Gurnard’s Head in Treen to the coastal path, and you can turn right for a four-hour walk to St Ives, with its Tate gallery, or turn left for a longer romp to Land’s End, past Botallack tin mine, which featured in the BBC’s Poldark. Either way, you can be sure of a comfortable night when you return, as the seven bedrooms all have luxury Vispring beds, Roberts radios and books (but no TVs). Settle down by the log fire in the shabby-chic bar, and tuck into a menu strong on local seafood.

Walk: Shorten the St Ives route and stop in Zennor to see the 12th Century church’s medieval chair with a carved mermaid, then pop into the Tinners Arms, before returning on inland paths. 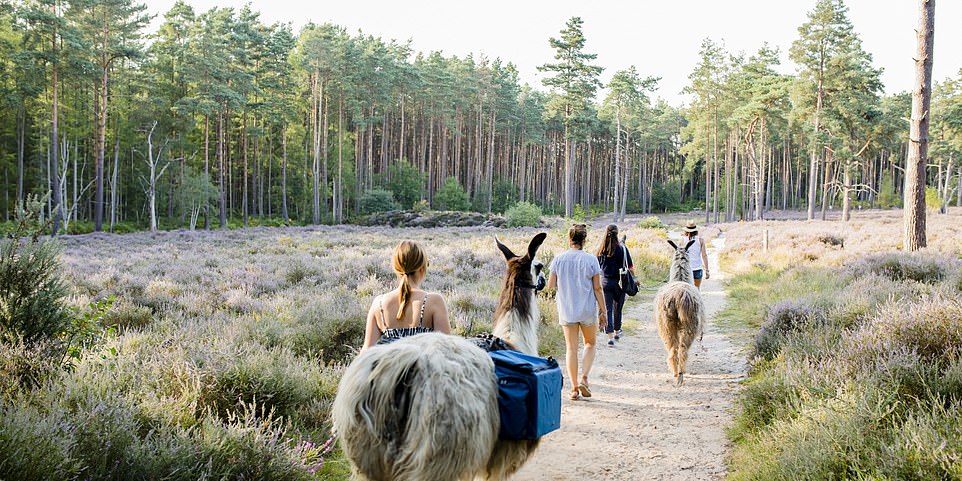 Quirky: For something out of the ordinary, walk with llamas on a three-mile jaunt in the Surrey Hills

Ditch the dog and take a llama on a walk through the Surrey Hills Area of Outstanding National Beauty – they will even carry your picnic.

The 16th Century Merry Harriers in Hambledon offers a variety of llama treks.

If llamas aren’t your thing, strike out on your own with a printed guide to four circular walks that take up to two-and- a-half hours.

Stay in one of the pub’s shepherd’s huts, which come with a log burner, chairs covered with sheepskin rugs, and a fire pit.

Walk: Stretch yourself on the five-hour round-trip to the scenic Devil’s Punch Bowl, or stick with the llamas on three-mile jaunts. 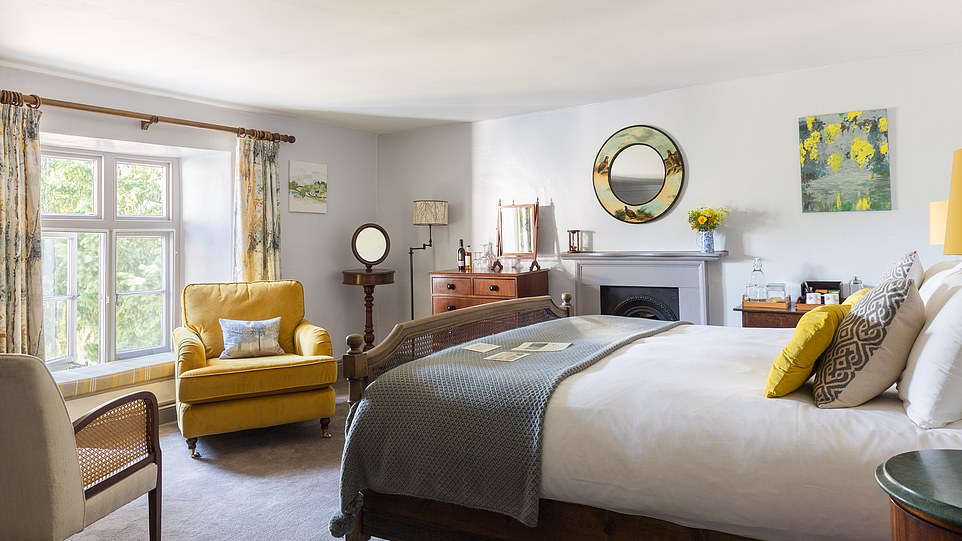 The Bell at Skenfrith is a good base for exploring the glorious Monmouthshire countryside. Pictured is one of the bedrooms

You can step out of the door of The Bell at Skenfrith on to the banks of the River Monnow and follow any of six circular walks in the glorious Monmouthshire countryside. A 300-year-old former coaching inn with flagstone floors and beams, The Bell is now more boutique hotel than bar, with 11 contemporary-style bedrooms.

THE YORKSHIRE DALES GET A FAR EASTERN TWIST 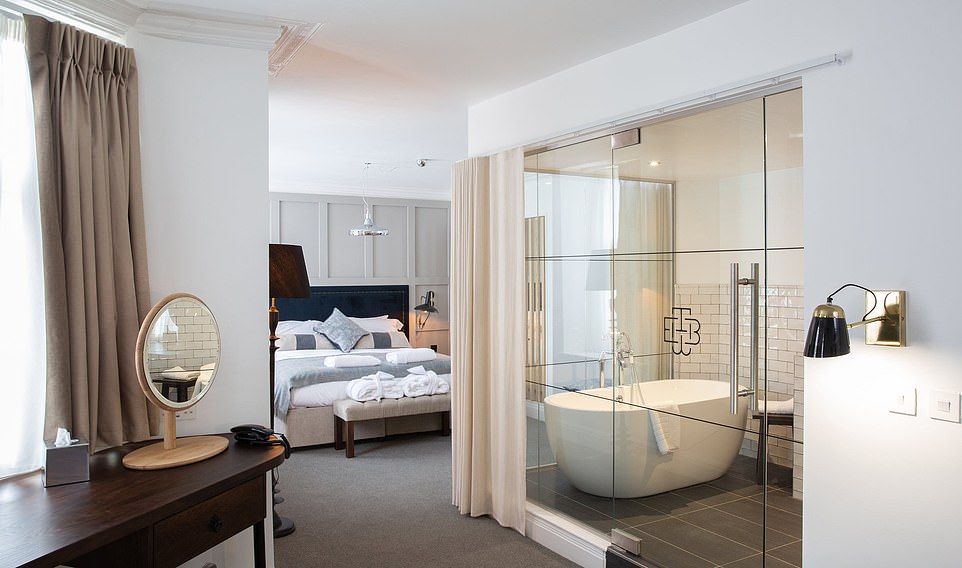 The 18 bedrooms at the Black Bull in Sedbergh have a Japanese simplicity, with clean lines and natural tones – one even has a deep Japanese soaking tub

They’re passionate about good food at the Black Bull in Sedbergh, and it’s often given an Asian twist by chef patron Nina Matsunaga.

Wine and dine with a guilt-free conscience after walks in the surrounding Yorkshire Dales (or there’s sake in the bar, too).

The dog-friendly pub’s 18 bedrooms have a Japanese simplicity, with clean lines and natural tones – one even has a deep Japanese soaking tub.

Walk: Hike to England’s highest waterfall, Cautley Spout, and back via the River Rawthey. The 11-mile route takes about seven hours but a shorter version is possible. Refuel at The Cross Keys Temperance Inn at Cautley. 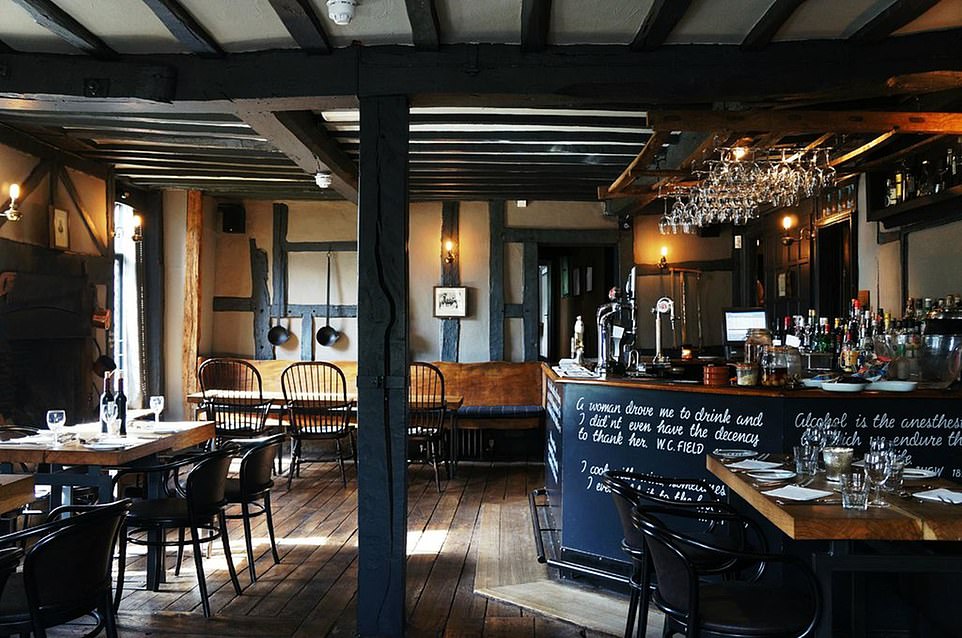 Staff at The Greenman in the Wye Valley provide packed lunches for ramblers, and in the evening the timber-beamed bar is the perfect place for some informal fireside dining – plus plenty of cider

Just 200 yards from the river, The Greenman in Fownhope makes a great base from which to explore the Wye Valley, with its cider apple orchards and ancient woodland.

The traditional Herefordshire Tudor inn has 17 smart rooms, some with sofas and four-posters.

Staff provide packed lunches for ramblers, and in the evening the timber-beamed bar is the perfect place for some informal fireside dining – plus plenty of cider.

Walk: It’s a six-mile circular yomp from The Greenman following the Wye Valley Walk towards the Forest of Dean, taking in an Iron Age hill fort, ancient woodland and apple orchards before returning to the crooked spire of St Mary’s Church.

GRAND TOUR OF DARTMOOR WIT A ROCK-SOLID BASE 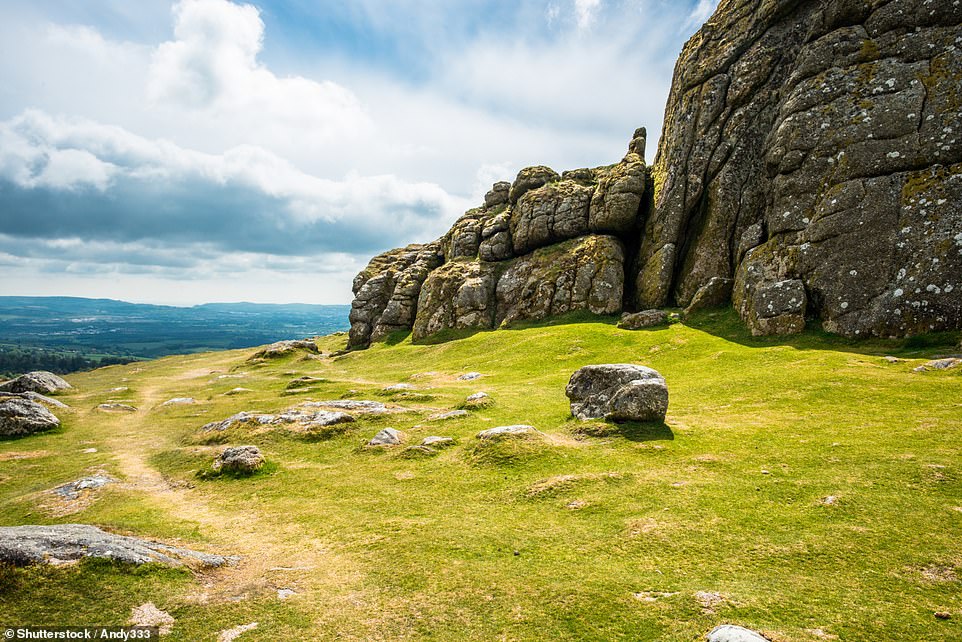 Climb up to Haytor on a three- and-a-half-hour round-trip that also takes in the disused granite tramway, the deserted medieval village of Hound Tor and Cairn Circle

All of Dartmoor is on your doorstep when you stay at the Rock Inn, built from granite quarried from beneath the massive tor of Haytor.

Run by the Graves family, it has nine traditional rooms with exposed beams, some with a four-poster or else a moorland view.

After a day spent exploring, return to log fires and warm hospitality in the bar, with its oak furniture and local ales, and tuck into delicious fare in one of a number of small dining rooms.

It’s just a short drive to South Devon and the coast path.

Walk: Climb up to Haytor on a three- and-a-half-hour round-trip that also takes in the disused granite tramway, the deserted medieval village of Hound Tor and Cairn Circle.

The food at the rustic-chic Duncombe Arms in Ellastone, on the edge of the Peak District, is a long way from your standard pub fare, with dishes such as truffle and honey burratina. The ten bedrooms are beautifully decorated with Colefax & Fowler wallpaper, luxurious fabrics and soft armchairs to relax in. Dogs get their own beds.

Walk: An eight-mile circular ramble takes you from the village to the Weaver Hills, with great views of the Dove Valley. Shorten it by driving to Wootton.

WALK IN THE FOOTSTEPS OF ULSTER’S STONE GIANTS 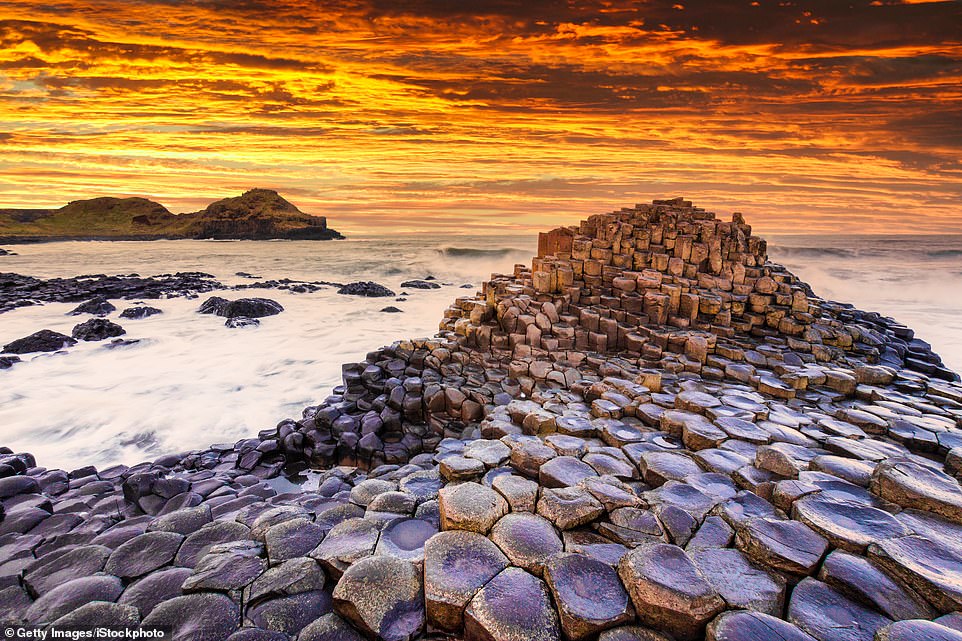 Stepping stones: A superb sunset at the Giant’s Causeway, which is made up of thousands of hexagonal columns

Just outside the front door of the charismatic Bushmills Inn is the trail of the old tramline, which runs a couple of miles to the coast where the wonders of the thousands of hexagonal columns that form the Giant’s Causeway await.

And it doesn’t matter what time you return, as there’s all-day dining in the restaurant, including large and indulgent cream teas.

Meanwhile, the atmospheric bar, which is still lit by gaslight, is home to peat fires and plenty of Guinness and oysters.

The 41 rooms range from cottage style to elegant and airy.

Walk: Once at the Giant’s Causeway, follow the coastal path one way and the cliff path back. Pop into The Nook for sandwiches and soup if you’re hungry.

TAKE A TRAIL FROM THE CAPITAL OF THE COTSWOLDS 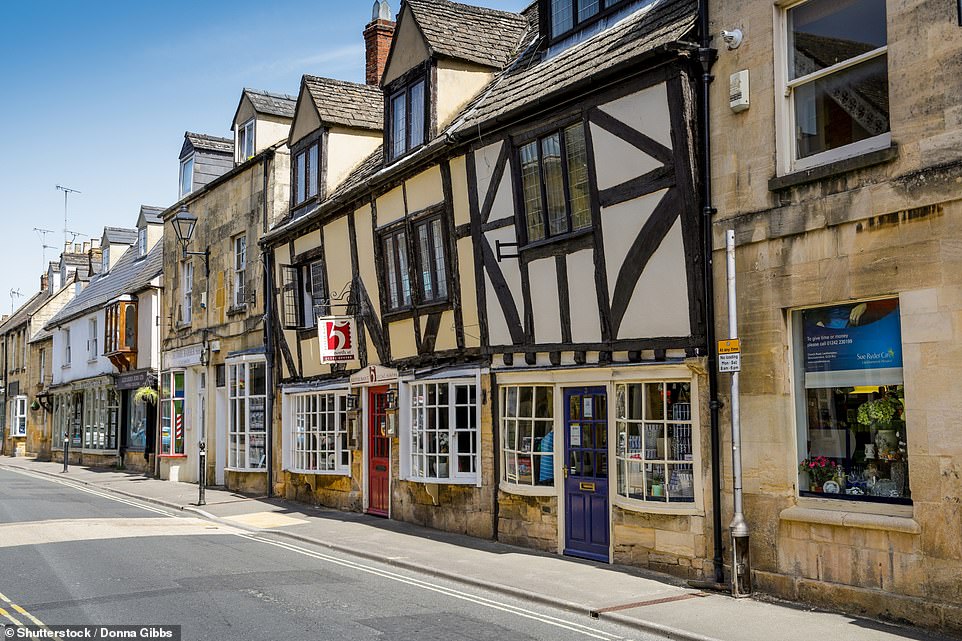 Follow a long-distance trail that passed through Winchcombe, dubbed the walking capital of the Cotswolds

There’s the best of both town and country at the honey-coloured Lion Inn in Winchcombe, with plenty of nearby shops and restaurants should the weather turn nasty.

Downstairs, country-chic rooms with exposed stone walls and wooden furniture form the backdrop for a menu of warming steaks and pies.

Walk: A number of long-distance trails pass through Winchcombe, dubbed the walking capital of the Cotswolds, and the pub has put together information on eight circular hikes taking up to four hours.