More than 17,000 employees at Shanghai’s Pudong International Airport were tested for the coronavirus after several new cases of COVID-19 were traced back to cargo workers at the facility.

On Sunday night, the thousands of workers were contained within the airport’s parking garage for testing within a makeshift site, the South China Morning Post reports. Of the 17,719 employees tested, 11,544 had tested negative by Monday morning. The remainder were still awaiting results.

Footage shared to social media shows many of the workers crowded into the parking area on Sunday night, with some appearing to push workers in full PPE gear. Later footage shared by the Global Times, a state-run news outlet, appeared to show the testing being conducted in a more orderly fashion.

Officials say the small outbreak is likely traced back to cargo handlers at the airport, who had cleaned a shipping container from North America on Oct. 30. The co-workers later tested positive for COVID-19, but weeks later, and after another had already left to visit his hometown in a different province, Reuters reported. Neither man was wearing a mask.

One of the men is also believed to have infected three other co-workers, as well as his wife. 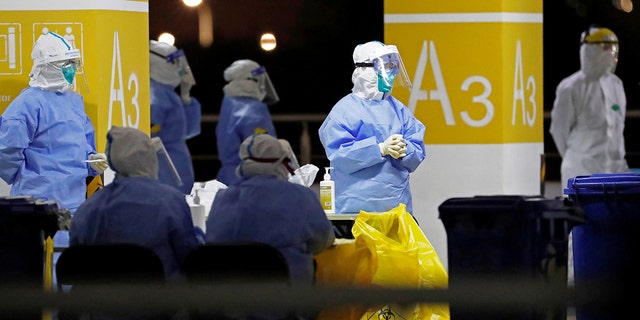 Airport officials now plan to set up on-site nucleic acid testing for the most vulnerable cargo handlers, said Zhou Junlong, the vice-president of the Shanghai Airport Authority, per the Morning Post.

“Meanwhile, we will step up disinfection of imported goods as well as the cargo handling equipment and work areas,” Zhou added.

The Morning Post further reported that the most vulnerable workers would receive a vaccine, if they choose, via emergency authorization from the Chinese government. China has yet to approve any vaccine for the general public.