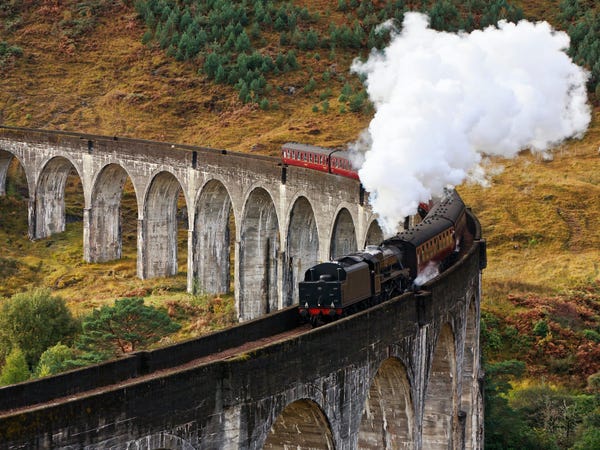 Pottermania is a phenomenon that shows no signs of slowing down, and for fans of the franchise, there is a real-life Hogwarts Express that you can ride through Scotland.

Officially known as the Jacobite, this classic steam-train experience allows you to sit in comfort while you pass actual "Harry Potter" film locations.

Operated by West Coast Rail, the 84-mile long round-trip takes you through some of Scotland's most idyllic and breathtaking scenery which also features in the films.

The journey lasts four hours and fans can spot locations like the Glenfinnan Viaduct or "Harry Potter Bridge," Loch Sheil — Professor Dumbledore's final resting place and location of the Triwizard Tournament in "Harry Potter and the Prisoner of Azkaban," and Rannoch Moor — where the Death Eaters attacked the Hogwarts Express in "Harry Potter and The Deathly Hallows Part One."

Starting in Fort William and ending in Mallaig, it's a trip through the Scottish Highlands that has often been described as the "greatest train ride in the world." And with over 3,000 reviews on TripAdvisor, many of which are glowing, it's easy to see why it's a popular addition to holiday itineraries for both "Harry Potter" fans and train enthusiasts. Condé Nast Traveller also listed the experience as one of its "best train journeys" in Europe.

From cream cakes and tea to breathtaking views, here's what it's like to ride the Jacobite train.

The journey begins in Fort William, in the shadow of Britain's highest mountain — Ben Nevis. 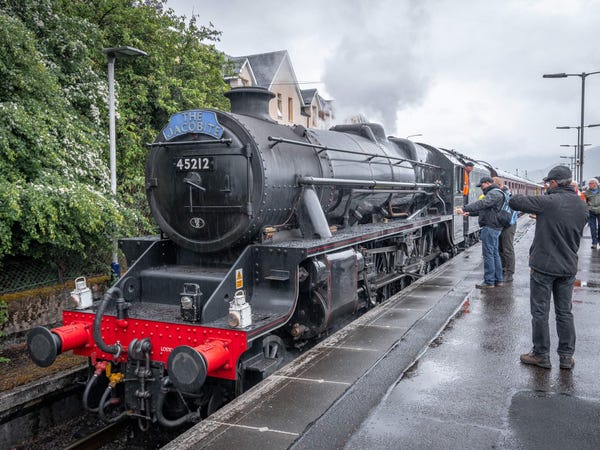 Starting by the UK's highest mountain, Ben Nevis, the train ride sets off from the valley of Fort William in Scotland and continues through the rolling hills of the Highlands to its first destination — Glenfinnan.

The train runs on the Mallaig extension of the West Highland Line which opened in 1901. The train itself has been running as a popular tourist route since the 1980s.

If you arrive early enough, there are some fantastic opportunities for travelers to snap some photos of the train — you might even get the chance to peek inside the train's engine carriage.

Peter W said the train "passes through wonderful scenery during its near 2 hours. Traveling in re-furbished former British Rail fifties carriages, the trip features a live commentary describing certain features along the line."

The train's first class carriage instantly transports you to the 1950s. 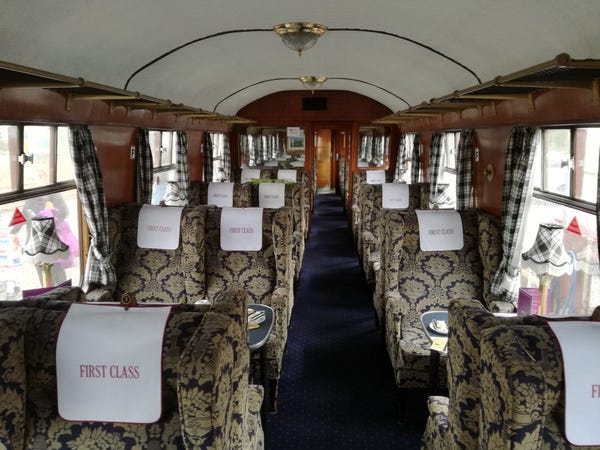 Although the train has been open as a tourist attraction since the 1980s, passengers are greeted with 1950s decor, which is found throughout the train's carriages.

The first class carriage is decorated with upholstered cushioned seating, private tables, and a lamp, allowing travelers to relax in style and comfort. A nod to the traditional great British railway trips of yesteryear.

According to the Mingarry Lodges blog, "the first-class experience is more about relaxing and enjoying the luxury of a bygone age than just snapping photos."

High tea, but make it boxed. 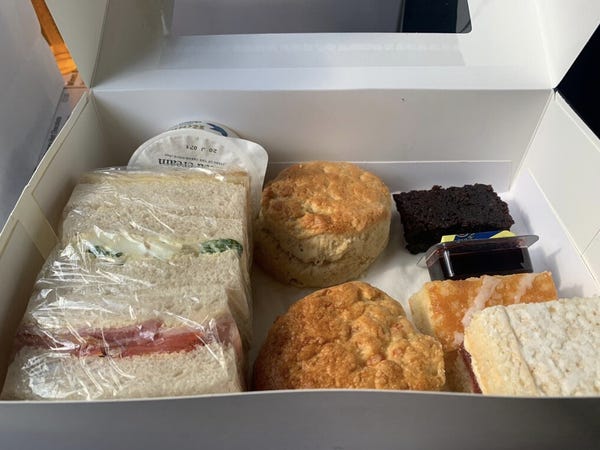 If taking high tea on a train takes your fancy, it is possible to do that on the Jacobite. According to several reviews on Trip Advisor, the tea is served in a box, available to those who book a first class ticket and at an extra charge. 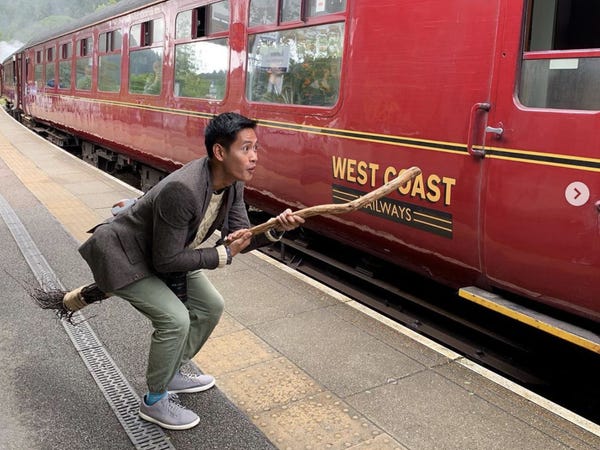 A quick visit to TripAdvisor shows hundreds of reviews mentioning the films, with many of its fans sharing photos of themselves wearing Hogwarts uniforms, capes, brooms, and house-branded sweaters.

Reviewer Lance Johnson said: "Although expensive — it has excellent scenery — you pass by major filming locations used in the movie — the Harry Potter Bridge (Glenfinnan Viaduct), the place where Dumbledore is buried, the place where the train stops when the Dementors visit them, etc."

The 'gem' of the train ride is The Glenfinnan Viaduct, where Harry and Ron famously caught up to the Hogwarts Express in a flying car. 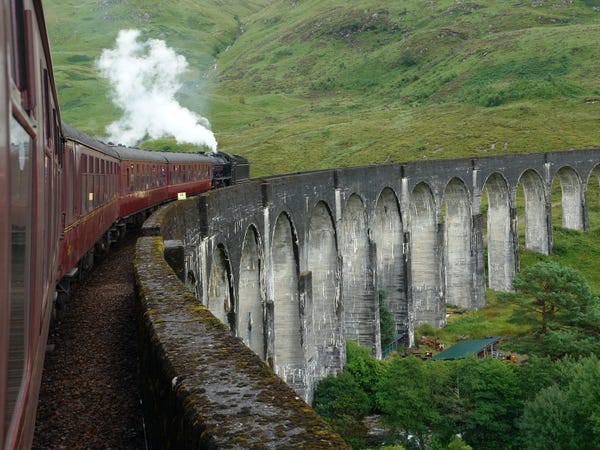 The Glenfinnan Viaduct is a recognizable landmark for many "Harry Potter" film fans, where many scenes featuring the Hogwarts Express were filmed.

The viaduct is located on the edge of Loch Shiel, where Harry faced the sinister Dementors for the first time during "Harry Potter and the Prisoner of Azkaban."

Many reviews mention this section of the tour as the best. A review by Lynn P said: "I am a huge Harry Potter fan and loved the experience of being in a proper old steam train taking the trip over the viaduct … We were lucky enough to be sat on the left side with the spectacular views."

However, a word of warning: If you find yourself on the right side of the train, you probably won't get the best view.

Carrick from Along For The Trip suggested making "your way the end of your carriage so that you can poke your head and camera out the back as the train rounds the viaduct," adding that "it's the perfect spot for photos." 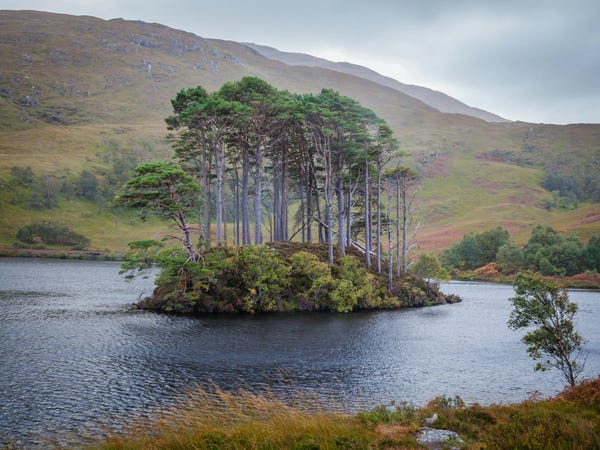 The likelihood of spotting he-who-shall-not-be-named? Probably zero, however you do get the opportunity to ride past the location used as Professor Dumbledore's final resting place.

A section of Loch Eilt is also used as the backdrop for the "Black Lake" where Harry completed one of his trials for the Triwizard Tournament in "Harry Potter and the Prisoner of Azkaban."

Not just one for the Harry Potter fans, there is much to see and do at the journey's end in Mallaig. 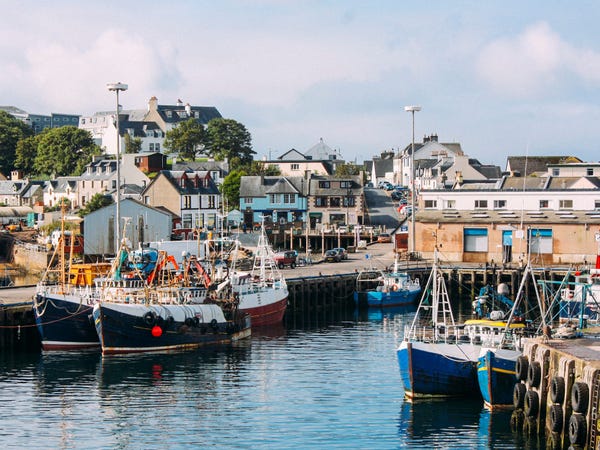 If you book a return journey you get an hour and a half to explore the fishing village of Mallaig, the last stop on the train ride.

From traditional fish and chips to a ferry service with direct links to the Isle of Skye, it's a chance to breathe and experience Scottish tradition.

Cornerstone Restaurant is the meal spot of choice with many reviewers recommending its fish and chips. "What a lovely find, we were greeted by friendly staff and shown to our window seat with a lovely view over the harbor … It was really fresh and very tasty, highly recommended," Ben B said.

The traditional meal is comprised of "fresh haddock in a crispy batter served with tartar sauce, real home-cut chips, and peas," and costs £13.50 ($17.48).

The West Coast Railway website also outlines activities in and around the Jacobite route. This includes tours around the Ben Nevis distillery which gives whiskey lovers a chance to see how the spirit is made.

Haggard Alley is Mallaig's very own Diagon Alley, where visitors can purchase all their wizarding delights. 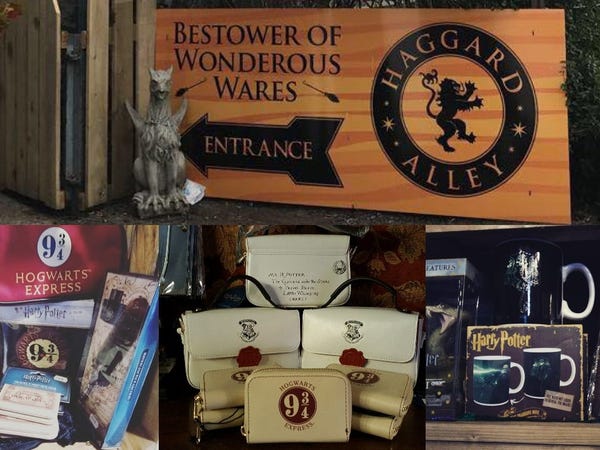 Located "down the wee Alleyway across from The Royal Bank Of Scotland" is Haggard Alley, a "Harry Potter" gift store that sells licensed merchandise.

Fans of the wizarding world are in luck — it's described as a "small treasure trove" with products like key chains, badges, posters, and homeware all available for the keen witch or wizard looking to purchase a souvenir.

Haggard Alley also has a gift store aboard the Jacobite with a trolley service that sells candy.

Bertie Bott's Every Flavor Beans £4 ($5.16), Jelly Snails, and Chocolate Frogs £4 ($5.16) are some of the treats available on the trolley. So if you want to recreate the "we'll take the lot!" scene from "The Philosopher's Stone," you can.

The store's website even has a rundown of all the locations fans will pass on the way.

You won't be able to ride the actual Hogwarts Express train used in the film, but you can see it elsewhere. 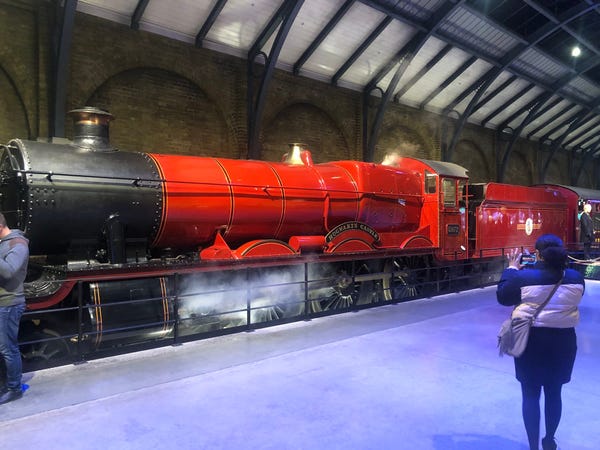 The actual front of the train used in the films can be found at the Warner Bros Studio Tour London located in Watford, some 490 miles away from the actual route.

Tickets can be quite costly, especially if you want to travel in comfort. 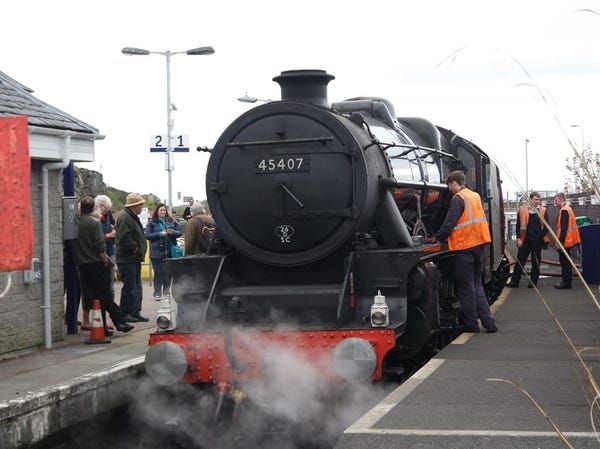 Many visitors have advised it's best to book weeks in advance. A Yelp review by Jenny N said: "If you can swing it, book first class and book early. This is not something you can just book two weeks ahead, let alone the day of."

Despite the price and limiting views depending on where you sit, most people say it's totally worth the visit. 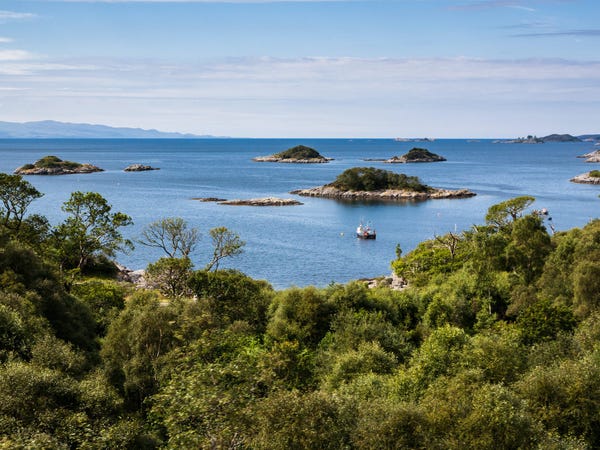 For some, a journey on the Jacobite was just a train ride. Elaine wrote that it is "really just a journey from Fort William through forest scenery and over the Glenfinnan Viaduct (blink and you'll miss it.)"

It's also no secret that the UK's unpredictable weather leaves little to be desired, and it's always best to go on a day when the weather is good — which can be difficult as tickets must be booked in advance.

However, over 3,000 of the reviews on TripAdvisor are positive, with 2,199 of them rating the experience as excellent.

As TripAdvisor user, LynsFrostee said: "This train trip is a must-do for everyone! The scenery is beautiful. Actually stunning!"

For "Harry Potter" fans, a trip to Fort William to board the Jacobite is almost like a pilgrimage. Ashlea Wheeler of A Globe Well Travelled said she "nearly squealed in excitement" when she saw the steam from the train in the distance.

The Jacobite is a train ride that brings together tradition, stunning views, and popular culture – even if it doesn't mean to. Richard V, a Yelp user who visited in May 2015, told Insider: "We liked the combination of a great train ride on a historical train through a beautiful landscape, topped with a trip over the iconic movie bridge."