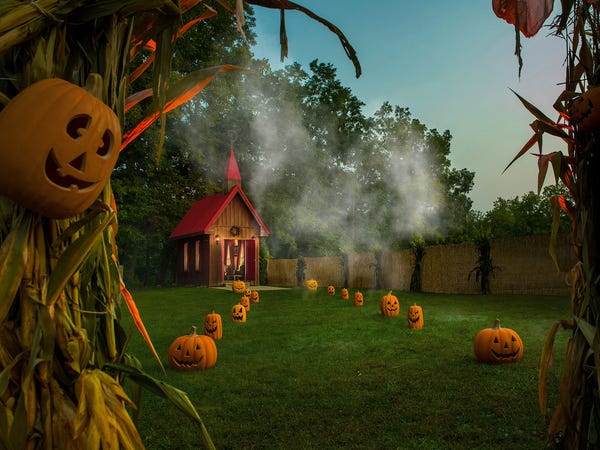 As the tiny house movement continues to grow, tiny houses are popping up all over — even in hell.

Airbnb has partnered with the conveniently named town of Hell, Michigan, to have guests stay in a tiny house in the quirky, Halloween-themed destination. Guests will be able to spend one night in the "Mayor's Lair" on October 18, 21, or 24 for just $31.

Take a look inside the tiny house and learn more about the town that the self-proclaimed mayor of Hell, John Colone, calls "hysterical."

In 1999, John Colone purchased land in a town known as Hell, Michigan, about 20 miles northwest of Ann Arbor. 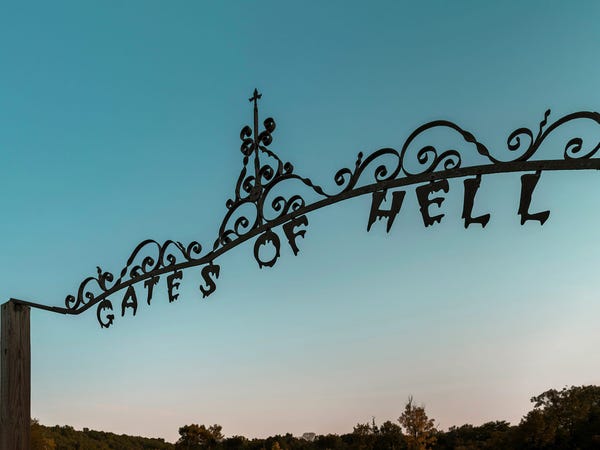 Colone told Insider that the town dates back to 1838 when a man named George Reeves ran a mill and general store. When farmers would go to the mill, some would never return because Reeves offered whiskey. When women were asked where their husbands went, they would often say, "He went to hell."

Around 1841, Michigan became a state, and Reeves was asked what he wanted his town to be called. Reeves said, "Call it Hell. Everybody else does," according to Colone.

Over a century later, Colone said he was running a car dealership nearby when he purchased the first property in Hell — a restaurant. Slowly, he bought the whole town for $500,000 and named himself its mayor.

Despite its history, Colone believes in one thing: "Hell is not historical. We are hysterical."

He eventually built a tiny house in the town, which acts as a chapel for weddings — now it has been turned into the Mayor's Lair. 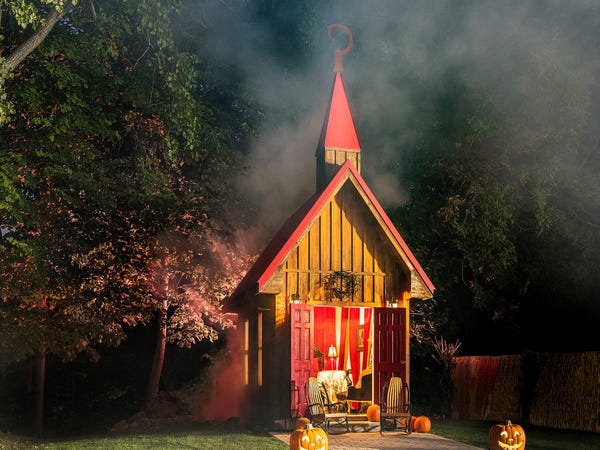 Colone partnered with Airbnb to turn this tiny house into an overnight accommodation this October.

"Ever been to Hell and back? Now's your chance," the Airbnb listing reads. "This month, I'm handing over the keys to the Gates of Hell and appointing you Mayor for the night."

Inside, the 112-square-foot house fits a queen-size bed that can sleep two people. 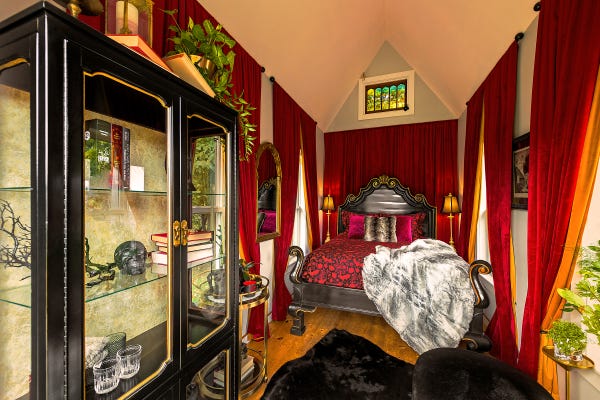 The inside is also decorated with red curtains and a black bedroom set. But when you have to go to the bathroom, you will need to creep outside of the tiny house to go to the private bathroom nearby.

To help stop the spread of the coronavirus, the tiny house will only be offered to those already living in Michigan. 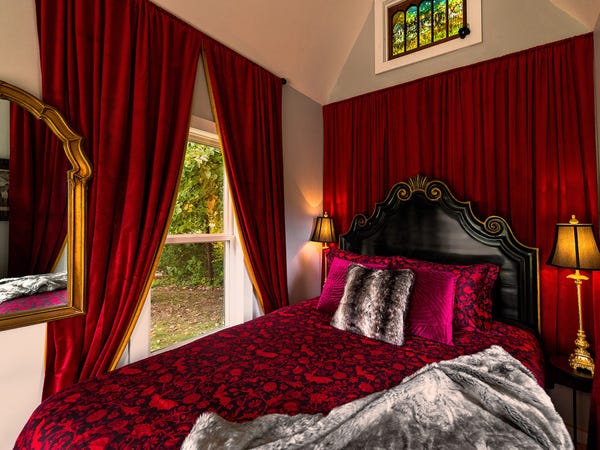 If you're a resident of Michigan, booking will open on October 14, and it will be on a first-come, first-served basis.

Along with the tiny house, you can also taste Hell's local cuisine at a Halloween-themed table. 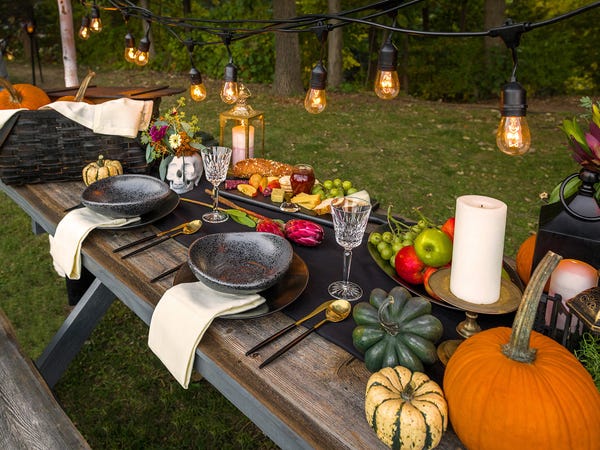 All meals are included in the $31-per-night price.

"Don't worry, it'll be more than brains and eyeballs," the listing reads.

There's also a firepit, so you can tell scary stories during your stay in Hell. 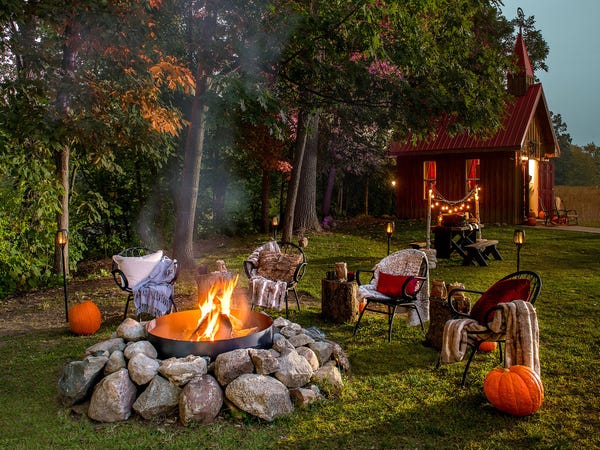 The listing says Colone will light the firepit for the guests.

The accommodation also has an outdoor movie screen that overlooks the firepit. 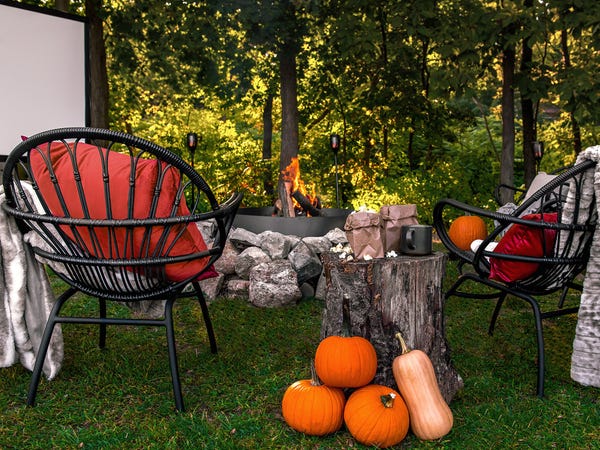 The Airbnb listing says it's the perfect place to watch a scary movie.

Colone said guests who book one of the three nights will be sworn in as the temporary mayor of Hell. 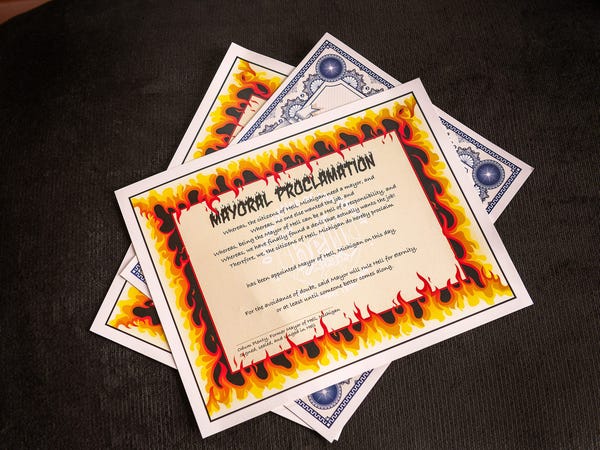 To be a mayor in Hell, you must own property there, so Colone will first have guests purchase an inch of land for a few cents and then be sworn in as the acting mayor using a proclamation.

At the end of the stay, Colone said he will impeach the mayor and reinstate himself, but he will ensure they get an exit visa for a "safe passage out of Hell."

While mayor, you will rule over Hell, which is home to a diner, a shop, and a lovers' bridge. 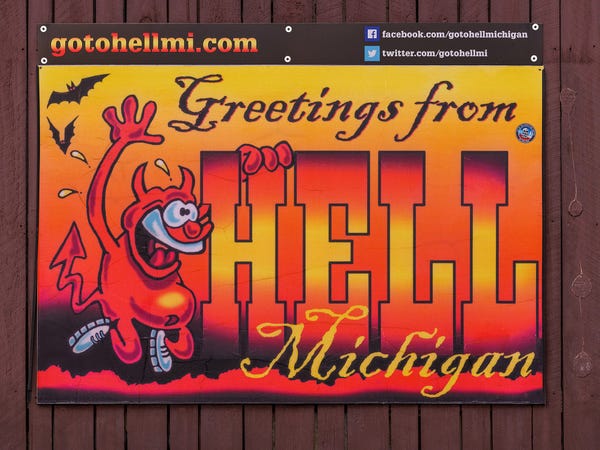 With a population of just 72 people, Hell bills itself as a tourist destination. There's a restaurant called "Hell Hole Diner" and a bar called "Hell's Saloon." The ice cream parlor stays on brand as well, calling chocolate chips bat droppings.

The Lock of Love Bridge is a place to "lock your lover in Hell." There's also a scattering yard where you can leave the ashes of a loved one "or the S.O.B. that deserves to be in Hell," Colone said.

Guests also have access to kayak and canoe rentals and a mini-golf course.

In the end, Colone hopes the guests at the haunted tiny house will leave with a smile. 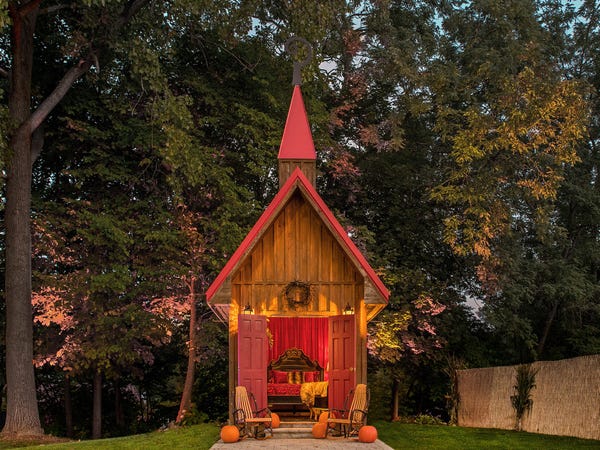 "More people tell you to go to our town than anywhere on Earth," Colone joked. "I want them to leave here wearing the biggest smile they ever had. I want them to have a lot of fun."