In a candid conversation with Oprah, Adele explained how her 2019 divorce from Simon Konecki influenced her new album, but that their relationship status is surprisingly happy.

Adele‘s first primetime concert special since 2015 was a not to be missed moment for fans of the global superstar. Not only did she perform a selection of her greatest and soon-to-be hits from her new album during the CBS special, ‘Adele: One Night Only,’ but she also sat down with Oprah Winfrey to get personal about her very private life. Though she’s spoken before about how her divorce from ex Simon Konecki influence the album 30 before, she went into much greater detail during their interview, admitting that despite ending their marriage, the pair are still on very good terms.

“We live across the street from each other,” Adele shared with Oprah with a smile. Apparently, though they could not make their marriage work, Adele still has “100%” love for her ex and the father of her son, Angelo, 9. “I respect him more than anyone.” This may come to some surprise to those who listen to her newest album, with Oprah initially dubs the artist’s “divorce” album. But Adele is quick to explain that the pain is more about her own journey, than anything that happened with Simon.

“I’ve been obsessed with having a nuclear family, because I never had one,” Adele added, saying that her she’s really “embarrassed” she couldn’t make her marriage work. “[Simon} and Angelo are angels,” she said, calling her ex the most “stable person” in her life. “He saved my life.”

So then it begs the question, which Oprah thankfully asked, what he thinks of Adele’s new album that puts out for the world everything they went through in their divorce. “He knows what kind of artist I am,” she explained. “I have to dig deep and tell my stories.”

Adele Then & Now: See Photos Of The Singer's Transformation

“It was overdue,” Adele said of her divorce  in an interview with iHeart Radio back in October. “It was exhausting, it was really hard work but I was able to take the time that I needed, which isn’t a given for everyone, I’m very aware of that.” And this was after the songstress recently shared details about the split in an interview with Vogue, revealing that she was “just going through the motions” and “wasn’t happy” in her marriage. Clearly, it was time for her to move on — and so she has with new man and sports agent Rich Paul. 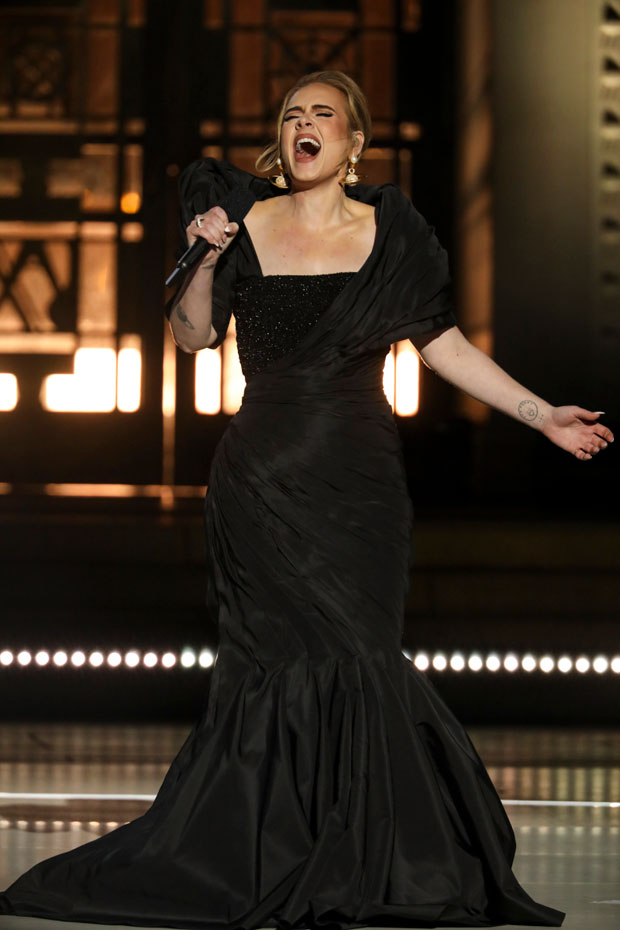 When she wasn’t spilling the tea with O, the 15-time Grammy winner was delighting a star-studded crowd in front of the Griffith Observatory in LA with epic performances. Stars like Selena Gomez, Leonardo Dicaprio, Lizzo, Tyler Perry, James Corden, Gabrielle Union and Dwayne Wade could be seen in the special singing along as Adele crooned out her hits like Skyfall, Someone Like You, and Rolling in the Deep.

But the real treat was when she sang four of her new songs off  the new album for the first time anywhere, including her smash single, Easy On Me.  Adele performed three soon to be hits called Love Is A Game, Hold On, and I Drink Wine — because of course she wrote a song about wine! Got to love her!