As Adele promoted her long-awaited new single ‘Easy On Me,’ fans caught a glimpse of her luxurious Beverly Hills mansion — including a stacked bookshelf!

Adele was front and center in several video interviews on Friday, October 15 to discuss her emotional new song, “Easy on Me,” which is her first piece of music in six years. As the 33-year-old British superstar spoke to news outlets like BBC Radio 1, part of her $9.5 million mansion in Beverly Hills, California was full visible in the background, and that of course caught fans attention. Adele bought the residence in May 2021, and as the video below shows, she has at least one magnificent room that got full exposure in her interviews.

Behind Adele, a massive bookshelf was fully visible for fans to get a peak at. As the Daily Mail noted, the bookshelf was complete with items like a William Shakespeare statue and an Egyptian mummy statue, as well as plenty of reading material. “Unseen London” by Mark Daly, “Who Shot Rock and Rock” by Gail Buckland, “The House Book” by Peter Andrews, “The Essential Lewis and Clark,” and “Life with Earth, Wind and Fires” by Maurice White were all neatly placed on the shelf. Adele’s clearly got a knack for organization.

While all those books are good and great, there was one specific piece of reading material that really stood out to Adele’s fans. That would be “Vogue Weddings: Brides, Dresses and Designers,” an obvious wedding-themed publication. Fans found that interesting considering the “Rolling in the Deep” songstress is dating sports agent Rich Paul. The two were first seen together during Game 5 of the NBA Finals over the summer, and Adele finally confirmed the relationship by making it “Instagram Official” in September. 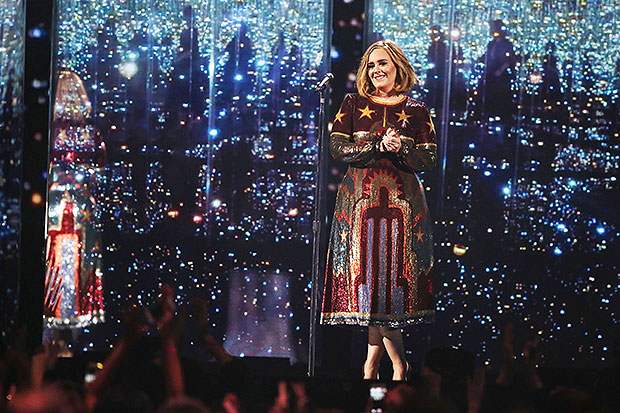 Adele Then & Now: See Photos Of The Singer's Transformation

So does this mean Adele is ready to take a big step in her romantic relationship? It wouldn’t be the first marriage for the singer: she and Simon Konecki tied the knot in 2016, separated in 2019, and finalized the divorce earlier in 2021. And as fans know, the heartbreaking divorce is the inspiration for Adele’s new catalog of music, which starts with “Easy on Me.” That single, which is already being lauded by fans and critics alike, is part of her upcoming fourth studio album, 30. It will be released on November 19.

During her BBC Radio 1 chat, Adele admitted that 30 “was bloody hard to make.” She added of the new album, “But I’m really, really proud of it and I feel like I can’t unlock a door for my own mental health and take the key with me. I’ve got to leave it in the door for everyone else and I’m in a strong place now where I feel like I can put that vulnerability out.”