With the news of Andrew Cuomo’s resignation as the governor of New York, fellow politicians, public figures, and Hollywood stars have sounded off on the ongoing scandal. Cuomo announced his decision to leave the position on August 10, revealing he’ll officially resign as the governor of New York in 14 days, per CNN. Cuomo’s announcement comes after a report from the state attorney general found he sexually harassed multiple women during his time in office, allegations the politician has vehemently denied.

“This is one of the most challenging times for government in a generation. Government really needs to function today. Government needs to perform … and wasting energy on distractions is the last thing that state government should be doing,” Cuomo said during a press conference (via The Hill). “I think, given the circumstances, the best way I can help now is if I step aside and let government get back to governing. And therefore, that’s what I’ll do.”

Since the news made headlines, stars like Ellen Barkin, Cynthia Nixon, and Ana Navarro-Cardenas celebrated his resignation on social media. Actor George Takei took to Twitter, writing, “Today proved that Republicans and Democrats truly can put aside their differences, listen to their voters, and come to happy agreement over Governor Cuomo’s resignation.” But while most celebs are in favor of Cuomo’s departure, Alec Baldwin seemingly shared a message of support for the disgraced governor. Keep scrolling to find out why the actor’s reaction has jaws dropping. 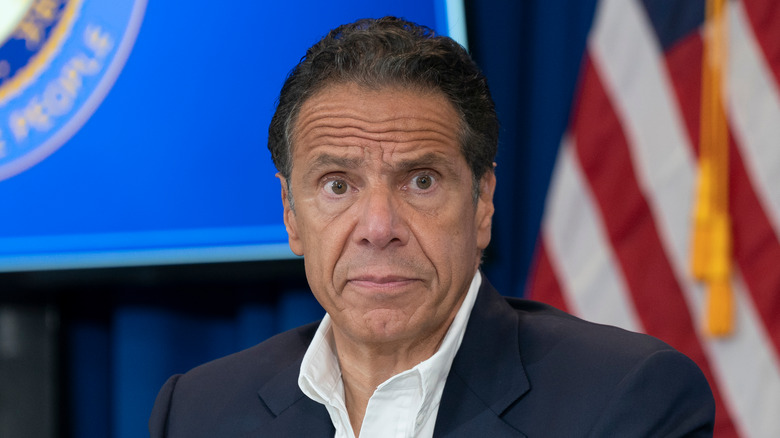 As reports continue to circulate amid Andrew Cuomo’s sexual harassment scandal and subsequent resignation as the governor of New York, the number of Cuomo’s friends is slowly dwindling. It appears, however, he may have Alec Baldwin in his corner, as the “Saturday Night Live” star shared a message on Twitter just hours after the politician made his announcement.

“Regardless of what you think of Cuomo, this is a tragic day,” Baldwin penned on August 10. “Party politics in this country draw ambitious but ultimately isolated, even socially maladjusted men and women who, given the current cancel culture, will likely have their shortcomings exposed and magnified.” It wasn’t long before the actor received backlash for his statement, with Twitter users calling him out for his choice of words. “So sexually harassing 11 women is merely a ‘shortcoming’? Quite a take,” tweeted one.

After causing the uproar, Baldwin shared a screenshot of a comment he replied to on Instagram, insisting he’s “not seeking to minimize Cuomo’s actions” regarding the claims. “When I wrote that this is tragic, I meant to suggest that nearly all powerful politicians are isolated, in the extreme, from reality,” he stated. “The people who you vote for in this country in the broader, more powerful elected positions don’t give a s**t about you or what you want. They work for their large donors, unions, and corporations. That is how the US system is designed. Powerful people holding onto power.”

If you or anyone you know has been a victim of sexual assault, help is available. Visit the Rape, Abuse & Incest National Network website or contact RAINN’s National Helpline at 1-800-656-HOPE (4673).