Beth Chapman, who with her husband Duane ‘Dog’ Chapman, starred in the popular reality series ‘Dog the Bounty Hunter,’ died Wednesday in a Honolulu hospital.

“Dog the Bounty Hunter” star Duane Chapman told reporters Wednesday that his wife remained selfless to the very end by making sure their family was OK right before dying of throat cancer. 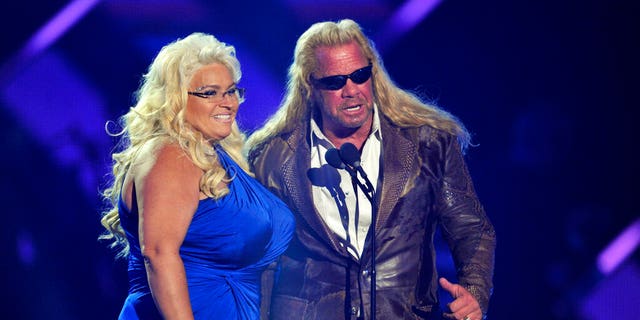 FILE: Duane "Dog" Chapman, right, and Beth Chapman present the award for CMT performance of the year at the CMT Music Awards at Bridgestone Arena in Nashville, Tenn.
(Invision/AP)

“When she had an attack I didn’t know anything to do but to say ‘in Jesus name’ and hold her and when I said ‘in Jesus name’ she said, ‘Say it again, say it more,”’ Chapman told Hawaii News Now.

Chapman said his wife’s last words to him and their two daughters were: “I love you,” and “Are you guys all OK? Don’t worry.”

After trying out alternative therapies, Chapman’s wife was rushed to the hospital in April 2019 with “serious breathing issues,” but recovered. She was rushed again to the ER over the weekend and placed in a medically induced coma.

“One of the last things she said [was] ‘It’s a test of my faith.’ She had faith and that was it,” Chapman told Hawaii News Now. “Well, the last step when you’re dying is to accept it, and she said to me the other day, ‘Honey, that last step, I ain’t taking…’ So go Bethy.”