Prince Andrew is certainly not the first of Queen Elizabeth’s sons to face controversy. Prince Charles, Prince Edward, and Andrew have all faced scandal at some point in their lives. For example, Edward once made headlines for intruding on Prince William’s privacy. At the time, Edward owned a television company and ignored a public mandate for the press to let Wills enjoy his privacy while pursuing his tertiary education, per The Guardian.

Who can ever forget how unpopular Charles was after his affair with Camilla Parker-Bowles came to light? Princess Diana famously said, “Well, there were three of us in this marriage. So, it was a bit crowded.” After the people’s princess died in 1997, public opinion of the heir-to-the-throne plummeted to a record low. According to The Washington Post, only 40% of polled British citizens thought he would make a good king.

According to royal expert Nigel Cawthorne, Andrew tried to cash in on Charles’ unpopularity with the public, per The Mercury News. Some wanted Charles to step down so that William could succeed the throne instead of him should the queen die. “As Charles’ popularity plummeted, Andrew lobbied the palace to install him as a regent for William,” who was a minor at the time of the discussion. If Elizabeth died, Andrew would run things in William’s place until he reached the age of majority. Cawthorne continued, “That has created friction between them which persists to this day.” Of course, Andrew has only received more scrutiny since then, so how will Charles treat Andrew once he becomes king?

Prince Charles wants to slim down the monarchy 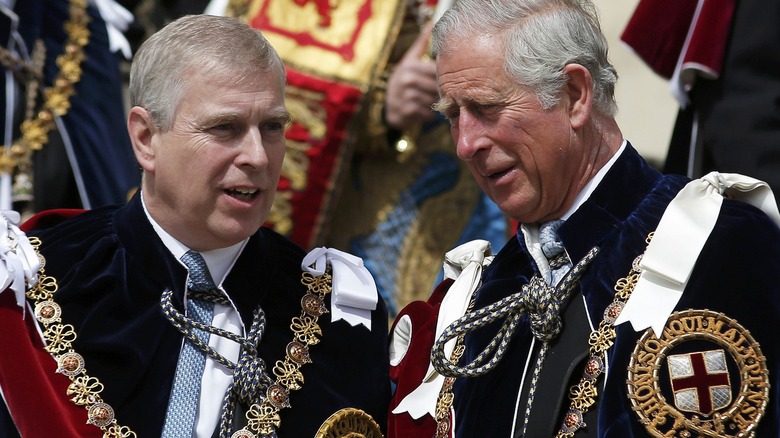 According to royal biographer Nigel Cawthorne, Prince Charles and Prince Andrew have a volatile history. Charles believes that his brother wanted to betray him when the British public was against him becoming the future monarch, per The Mercury News. However, Charles rebounded, seemingly against all odds, and will ascend the throne after Queen Elizabeth II dies. However, the author claims it has left a bitter taste in the future king’s mouth as he cannot forget Andrew’s, and apparently Prince Edward’s, actions.

Charles has been vocal about his plans for a “slimmed-down” monarchy, per the Express. He wants to ax some senior royals after his mother dies, lessen the number of HRH titles, and therefore the number of full-time working royals. Wales Online reports that the seven-member Firm would include Charles, Camilla Parker-Bowles, Princess Anne, Edward, Sophie Wessex, and Prince William and Kate Middleton; Prince Harry and Andrew allegedly don’t make the cut. This created “tension” among the brothers and “was a big issue for Prince Andrew.”

A Buckingham Palace spokesperson reportedly told Newsweek that Charles’ future plans for Andrew could include the loss of his royal titles. The Duke of York is the colonel-in-chief of the British Army regiment, the Grenadier Guards; they reportedly no longer want him to be their colonel either, per The Sunday Times. Since Andrew is currently riddled with scandal, Charles will have to think hard about his brother’s future role in the monarchy.