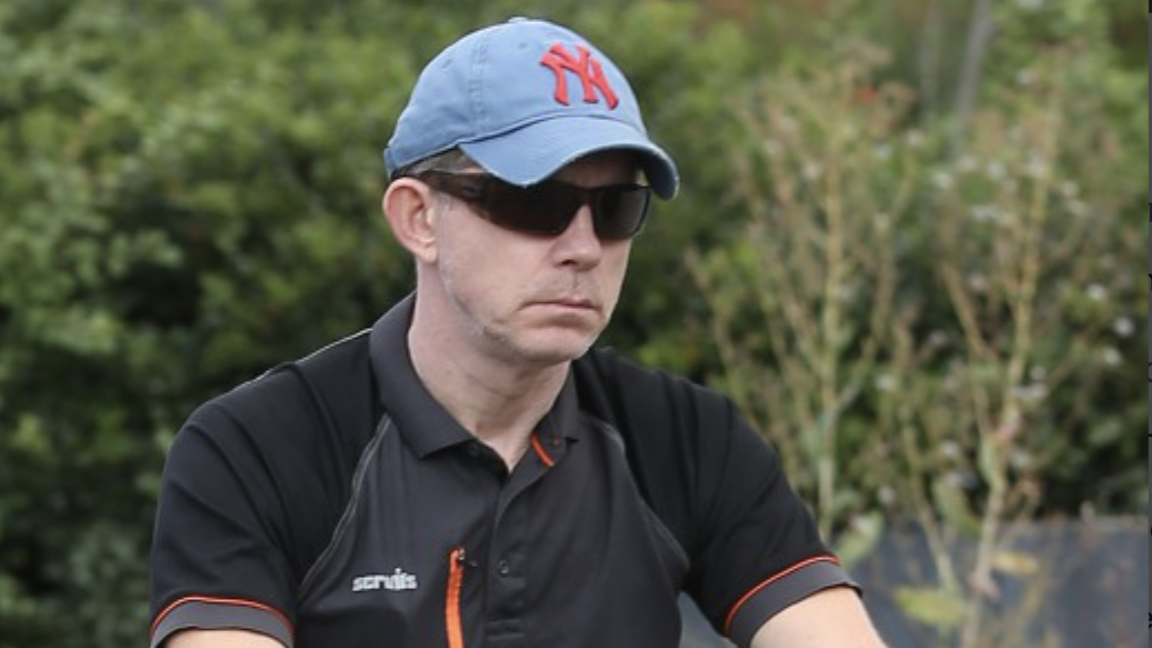 Lee Evans has been spotted for the first time in a year as the former comedian headed out on his electric bike in Essex.

The 57-year-old has mostly kept a low profile since quitting comedy in 2014, but was spotted out and about and sharing a joke with a neighbour in September last year.

Lee was seen again this week as he rode on the £1,599 Volt electric bike, wearing a blue New York Yankees baseball cap and sunglasses.

He appeared ready for some DIY as he wore a top by workwear brand Scruffs as well as workman’s trousers with reinforced knee patches.

Lee has mostly stayed out of the limelight since retiring from comedy in 2014, citing the death of his manager, Addison Creswell, a year earlier as the catalyst for leaving stand-up behind.

He said during an appearance on The Jonathan Ross Show in 2014: ‘I am knackered. This is it. Finished. Not doing anything.

‘My manager died last year. Yeah, sorry to get serious. I’m not an ambitious person.

‘Addison used to put his arm around me and said, “It’ll all be alright, I’ll look after you.” It happens in life. People pass away.

‘Doing these arenas, it’s been humbling. We have a great laugh (together, with the audience). It’s really important, because it doesn’t last long.’

Lee had remporarily come out of retirement in 2018 to star in a run of Harold Pinter’s one-act play Monologue but chose to step away from showbiz to spend more time with his wife, Heather Nudds, and their daughter Mollie after so many years of touring.

He had been one of the UK’s most successful comedians, with his 2008 tour seeing him perform to over 500,000 fans across 59 dates, as well as selling over 1 million copies of his DVD.

However, he admitted that being on the road and filming all the time had meant he missed out on important moments of family life.

Lee revealed: ‘I wanna be there. I’ve always said to Little Mo, “I’m sorry I can’t go to the school play cos’ I’ve got to do this work.”