Music stars and loved ones say their goodbyes to Terry Hall: Funeral takes place in London for The Specials frontman and pioneer of Ska following his death from pancreatic cancer at the age of 63

Musicians and loved ones have said their goodbyes to The Specials frontman Terry Hall on Tuesday following his untimely death from cancer at the age of 63 last month.

Tim Burgess of The Charlatans and Steve Cradock of Ocean Colour Scene were among the music stars seen paying their respects at Hall’s funeral, held at the Golders Green Crematorium in northwest London.

The father-of-three lost his battle with pancreatic cancer after it spread to his liver and he developed diabetes.

He had been receiving chemotherapy with the hope of releasing new music, however the treatment failed and he died on December 18. 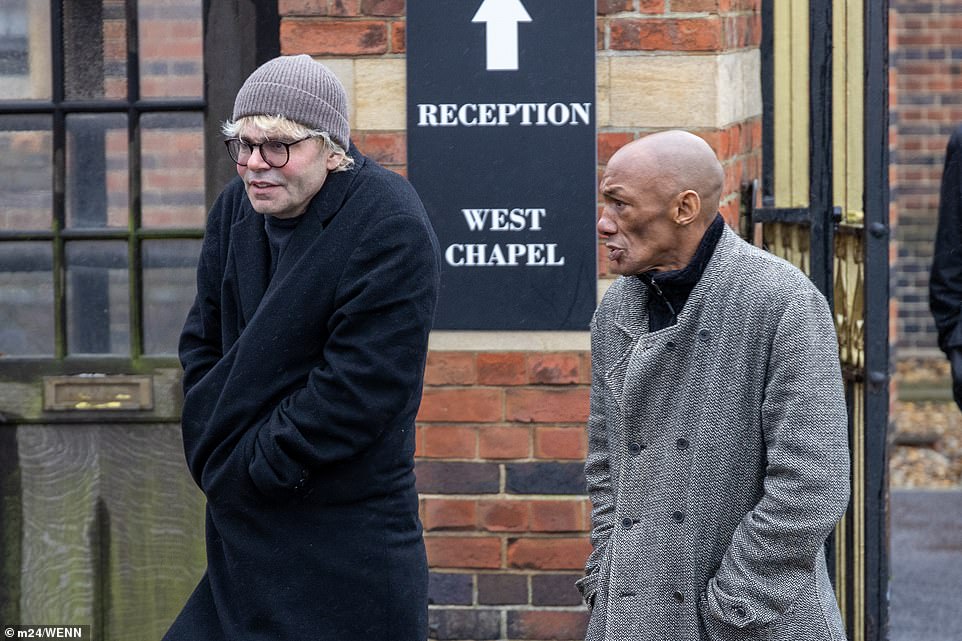 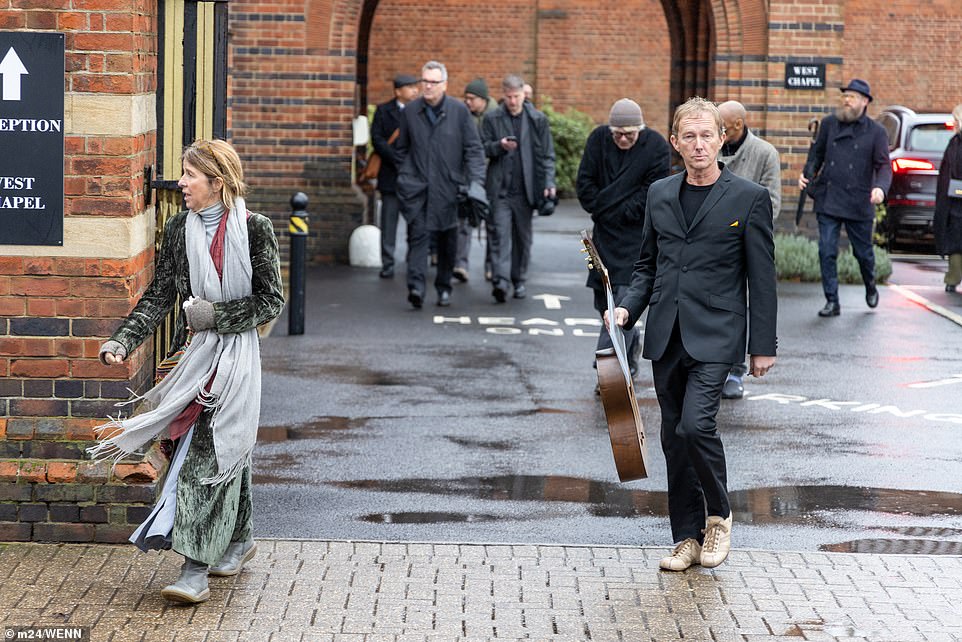 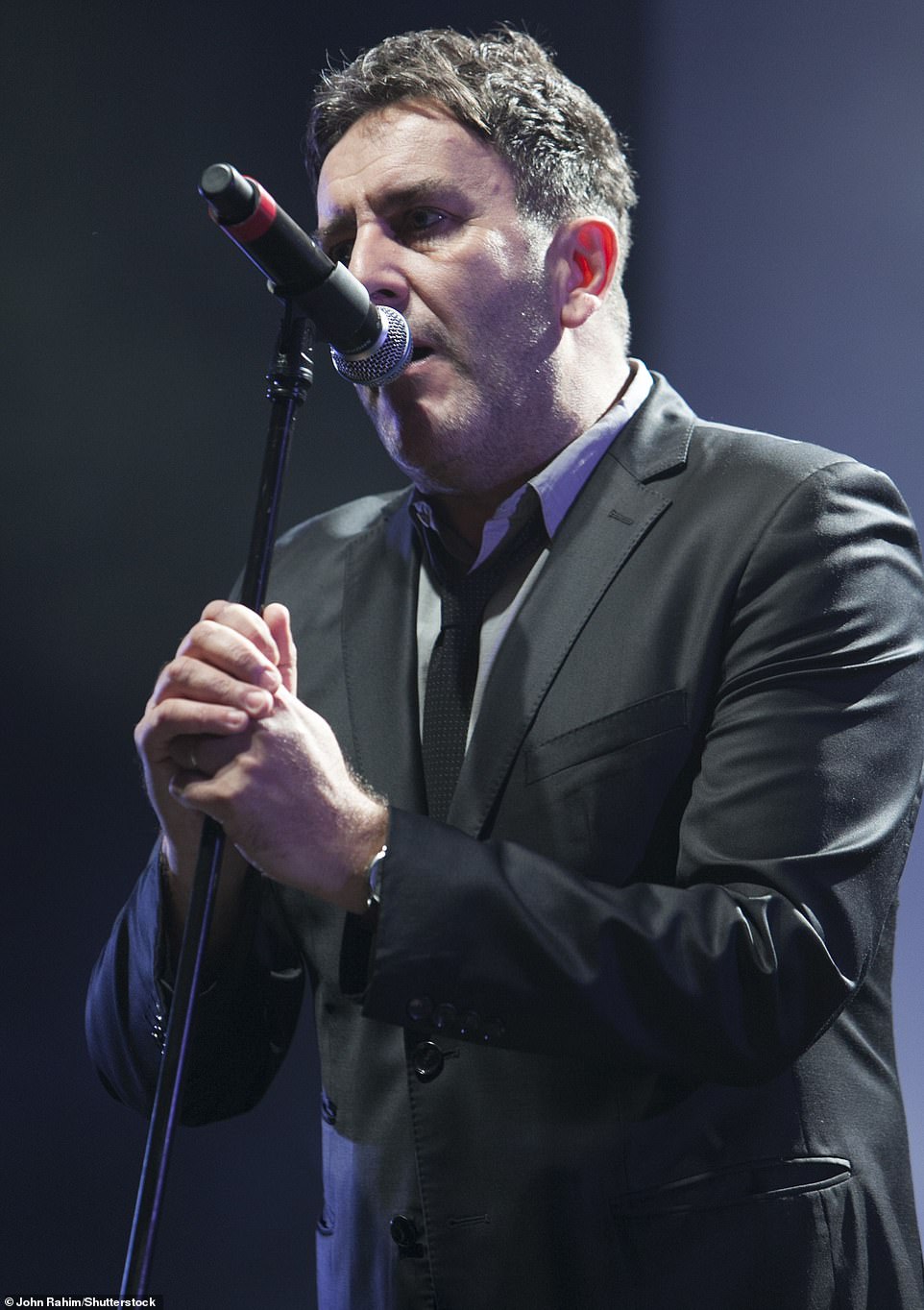 Dozens of mourners arrived to his funeral on two red double-decker London buses on Tuesday.

They were seen huddling under umbrellas outside the crematorium before heading inside for the service.

Hall’s bandmate Horace Panter revealed in a Facebook post following his death how he had wanted to keep his diagnosis private while the group was preparing to record a new reggae album in Los Angeles.

But the singer, who pioneered the British ska scene, became seriously ill just weeks before they were due to fly to the US.

Panter revealed: ‘Terry had the framework for eight tunes. Confidence was high. We were set to meet up with Nikolaj [Larsen, Specials keyboardist] and make magic.

‘This was in September. Terry emails everyone and says he’s in bed with a stomach bug and can’t do the first week of pre-production sessions. No big deal, we can knock everything back a week. We’re not due to fly out until November 4th.’

He continued: ‘This is serious. Like life-threatening serious. He has developed diabetes due to his pancreas being attacked. This has to be treated first, then it’s a regime of chemotherapy. There is nothing anyone can do. Everything is put on hold.

‘Terry is emphatic that no one be told about this. If anyone asks, he’s managing his diabetes.’

Panter had hoped that if the chemotherapy did its job, the band would be able to get into the studio by March next year.

He said: ‘The chemo treatment starts favourably but it seems that it would be March 2023 at the earliest before we’d be in any position to work. He is in and out of hospital to stabilise the diabetes issue and also to manage pain. It then goes quiet.’

The band’s manager Steve Blackwell contacted Panter and said he feared Terry was ‘slipping away’ on December 15, and he died a few days later on December 18.

Panter added: ‘He [Blackwell] calls me on his return journey and says things are not looking promising. Terry is dying. 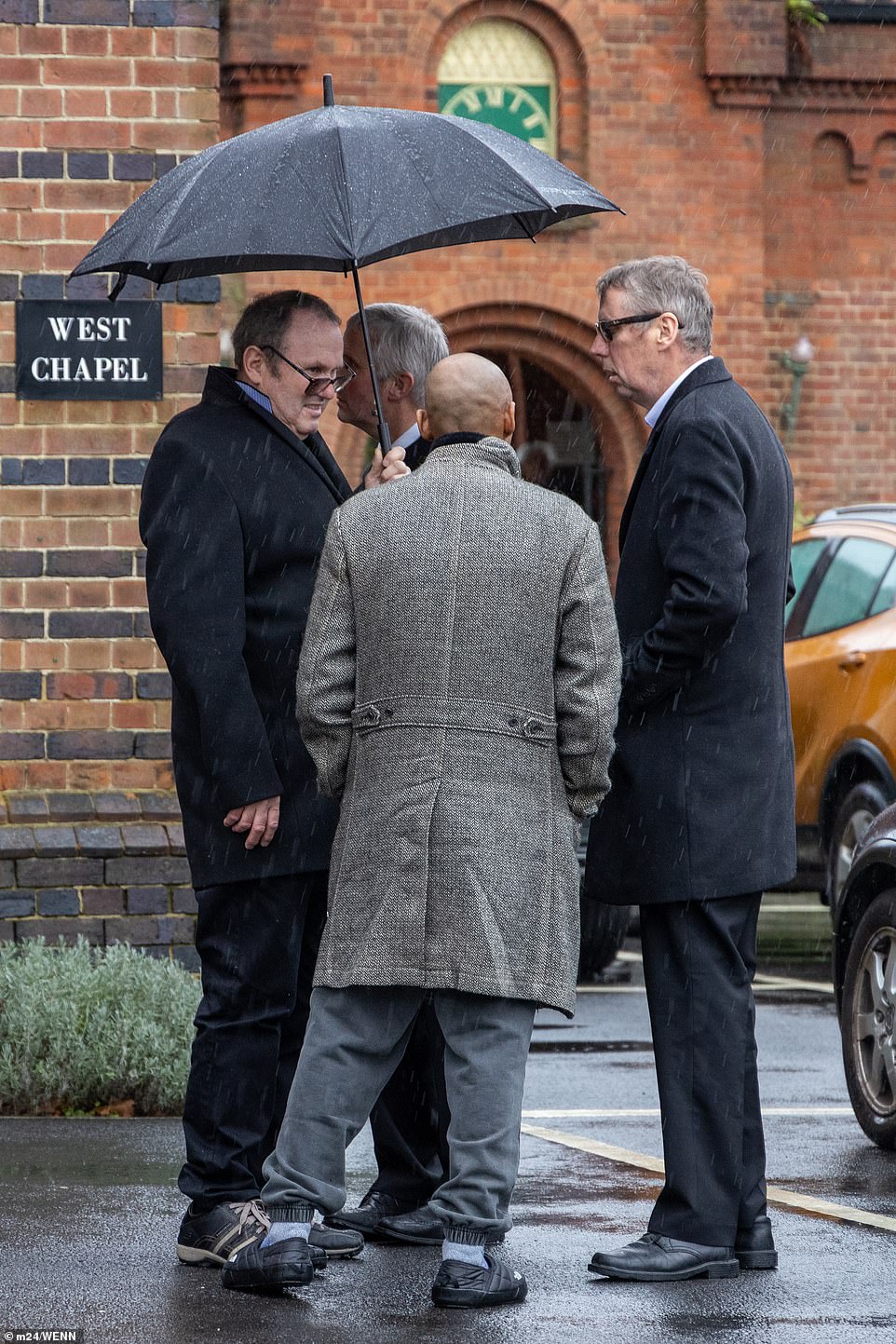 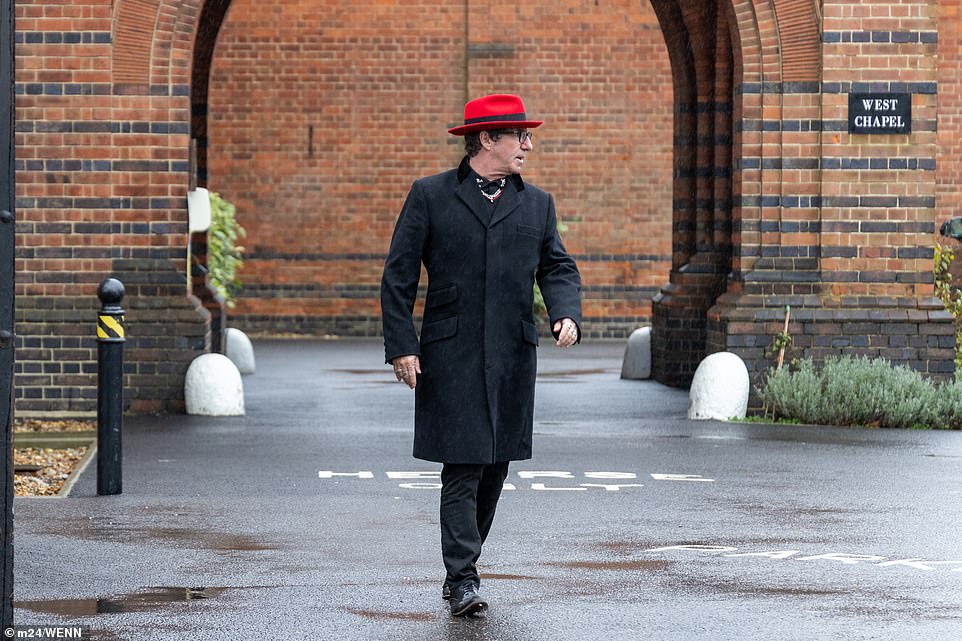 Hall’s bandmate Horace Panter revealed in a Facebook post following his death how he had wanted to keep his diagnosis private while the group was preparing to record a new reggae album in Los Angeles  (Pictured: Guest arriving to Hall’s funeral on Tuesday) 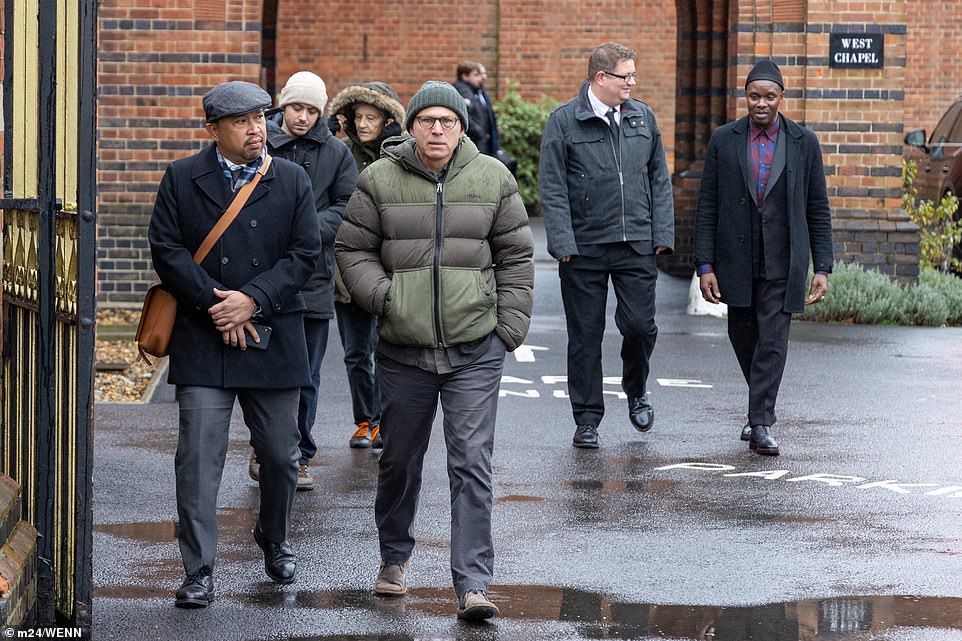 Terry Hall, who pioneered the British ska scene, became seriously ill just weeks before he and his bandmates were due to fly to the US to record new music (Pictured: Loved ones at Hall’s funeral on Tuesday) 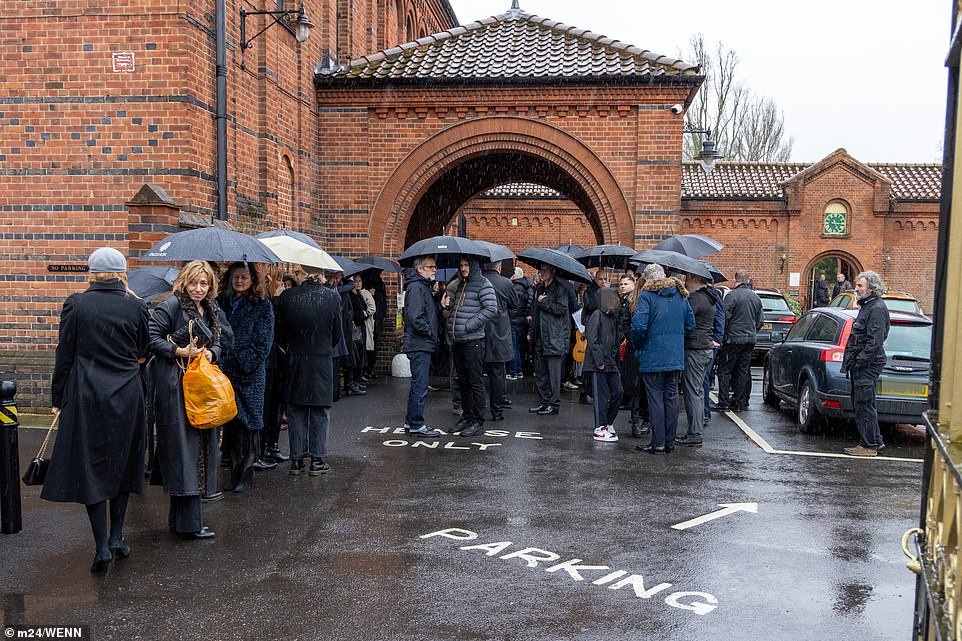 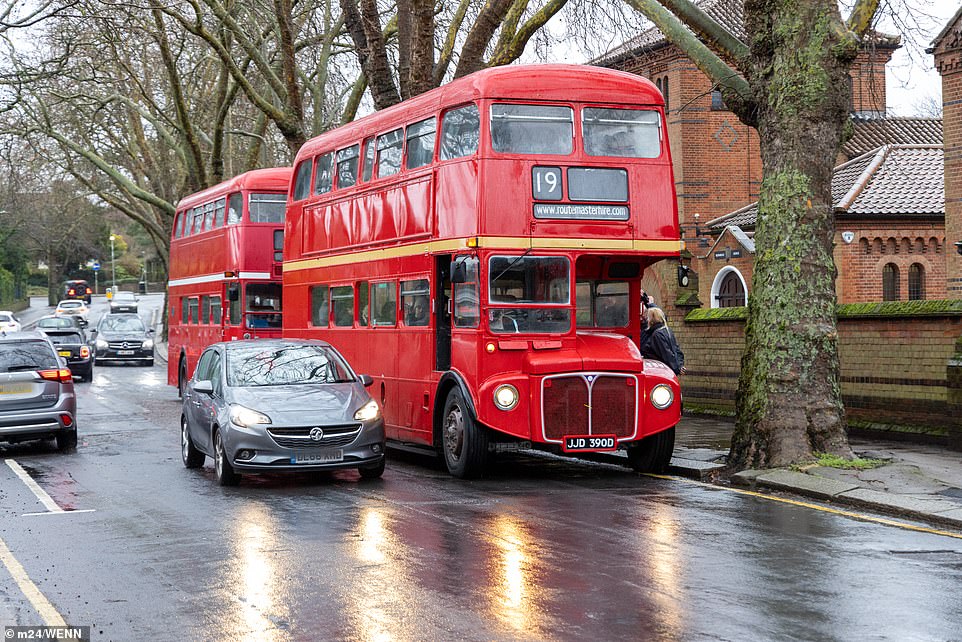 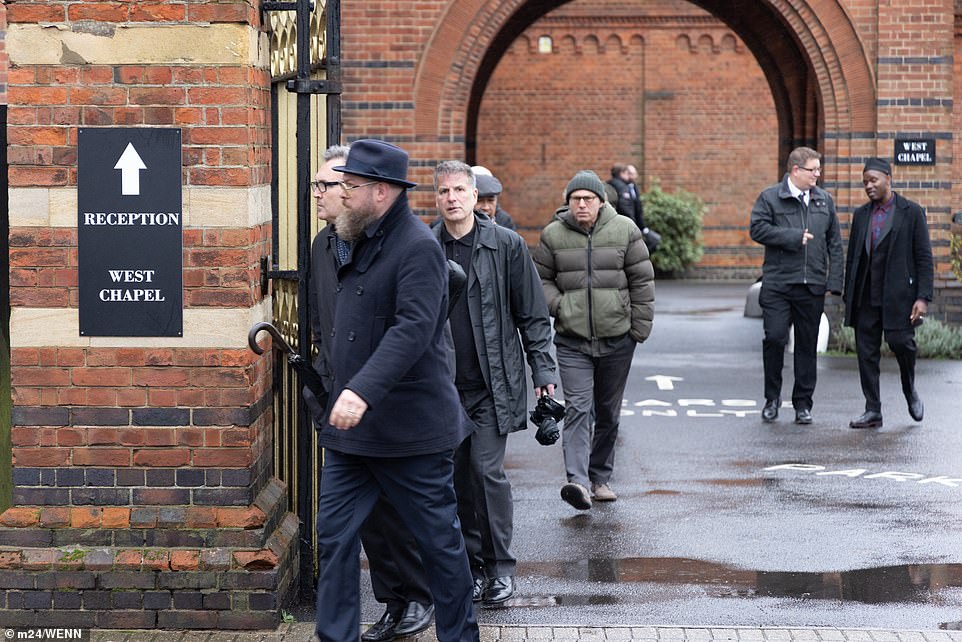 The Specials were hoping Terry Hall would recover from cancer but his chemotherapy failed (Pictured: Guests at Hall’s funeral on Tuesday) 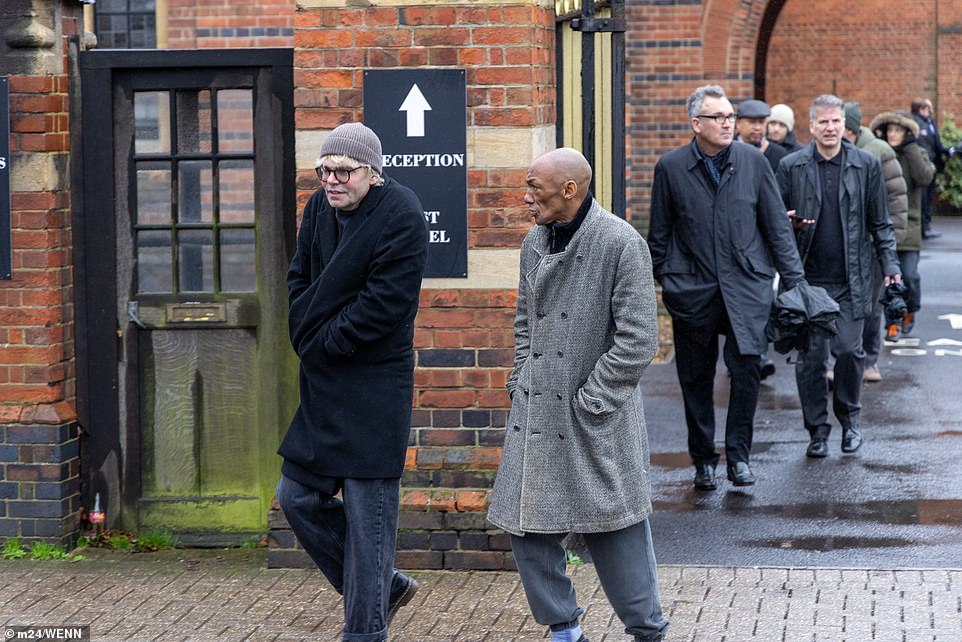 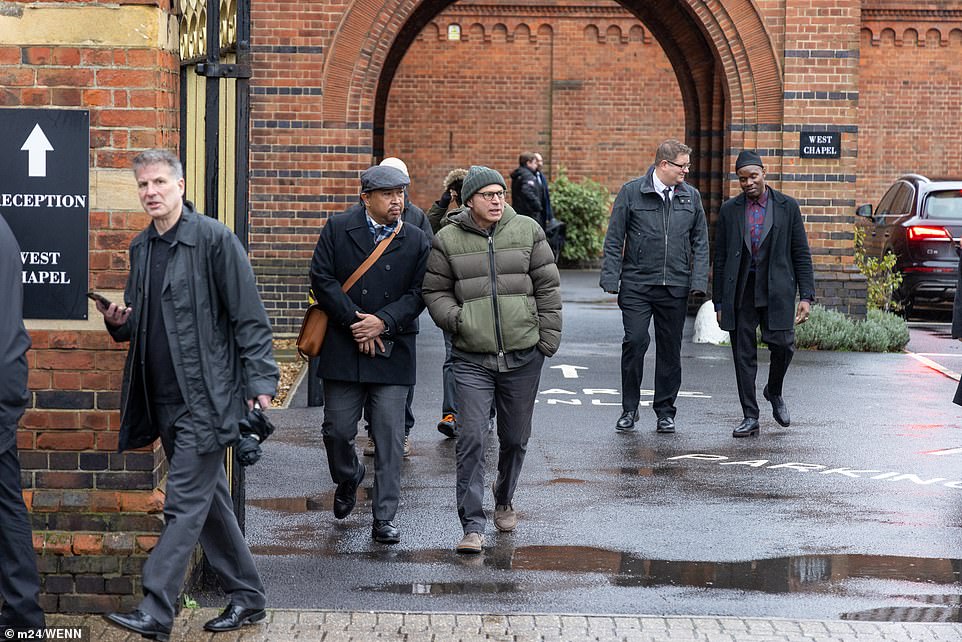 Announcing Hall’s death on Twitter last month, The Specials said: ‘It is with great sadness that we announce the passing, following a brief illness, of Terry, our beautiful friend, brother and one of the most brilliant singers, songwriters and lyricists this country has ever produced.’ (Pictured: Guests at the funeral of Hall on Tuesday)

‘The next day he is put on morphine and is more or less unconscious for most of the time. I thought it would be best for me to go and visit but Lindy, his wife, advises against it.

‘She has held her phone to Terry’s ear so that his sisters and Lynval can say their goodbyes. She suggests I do the same. So, I did. It was tough. Terry died around half past 5 the next evening, Sunday 18th December. The world has lost a unique voice and I have lost a good friend.’

It comes after tributes flooded in for the music legend, who rose to fame with mega hits like Ghost Town, Gangsters and Too Much Too Young.

Announcing Hall’s death on Twitter, the band said: ‘It is with great sadness that we announce the passing, following a brief illness, of Terry, our beautiful friend, brother and one of the most brilliant singers, songwriters and lyricists this country has ever produced.

‘Terry was a wonderful husband and father and one of the kindest, funniest, and most genuine of souls. His music and his performances encapsulated the very essence of life… the joy, the pain, the humour, the fight for justice, but mostly the love.’

The post went on to say: ‘He will be deeply missed by all who knew and loved him and leaves behind the gift of his remarkable music and profound humanity. Terry often left the stage at the end of The Specials’ life-affirming shows with three words… ”Love Love Love”. We would ask that everyone respect the family’s privacy at this very sad time.’

Bandmate Neville Staple led the tributes to the singer, tweeting: ‘This has hit me hard. We knew Terry had been unwell but didn’t realise how serious until recently. We had only just confirmed some 2023 joint music agreements together.

‘In the music world, people have many ups and downs, but I will hang onto the great memories of Terry and I, making history fronting The Specials and Fun Boy Three together. Rest easy Terry Hall.’

‘Terry’s voice was the perfect instrument for the true and necessary songs on “The Specials”. That honesty is heard in so many of his songs in joy and sorrow. My condolences to his family and friends.’

Born in Coventry in 1959, Hall was shaped by a horrific experience of childhood sexual abuse when he was abducted by a paedophile ring on a trip to France aged 12.

Hall sang about the harrowing ordeal with the song Well Fancy That – performed as part of his second band Fun Boy Three – and told interviewers how it left him suffering from bouts of depression and addiction problems. 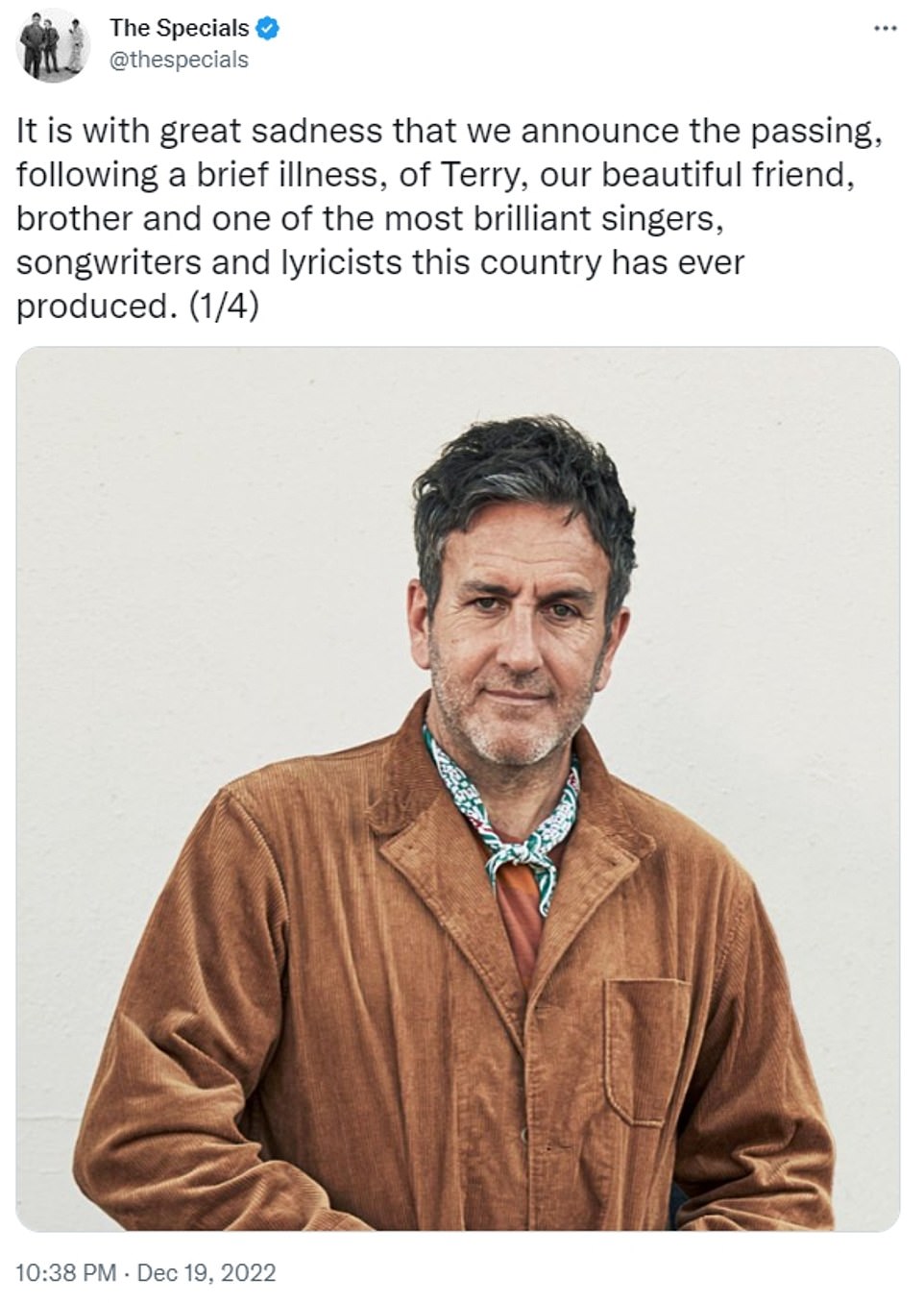 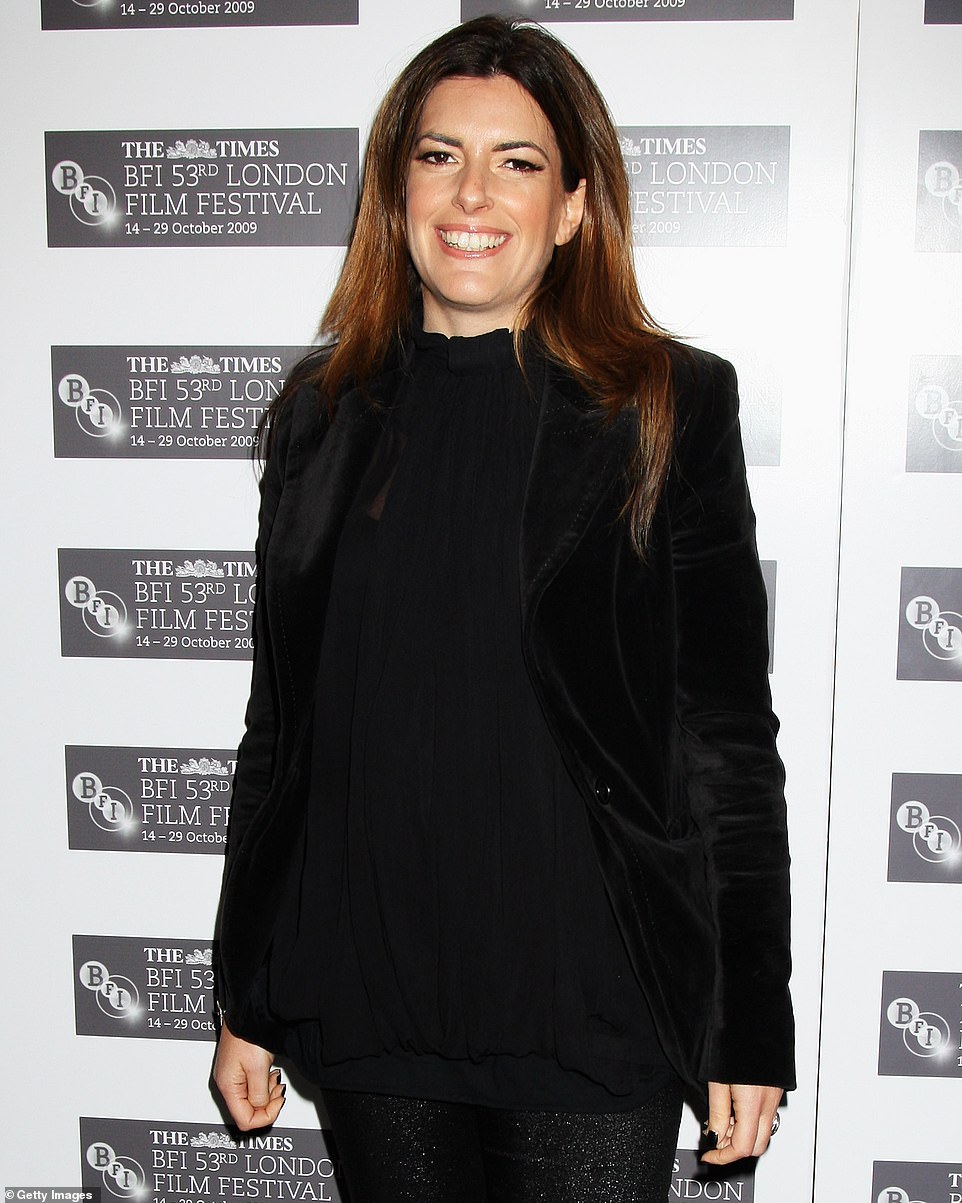 Hall is survived by his wife, the director Lindy Heymann. They had one son, while Hall has two older sons with his ex-wife, Jeanette Hall

Ska is a combined musical element of Caribbean mento and calypso with American jazz and rhythm and blues.

It separates itself from other musical genres due to its walking bass line accented with rhythms on the upbeat. In the early 1960s, ska was the dominant music genre of Jamaica and was popular elsewhere, including in Britain.

Ska music was made for dancing. It stands out because the music is upbeat, quick and exciting.

Music historians typically divide the history of Ska into three periods: The original Jamaican scene of the 1960s (First Wave); the English 2-tone ska revival of the late 1970s (Second Wave); and the third wave ska movement, which started in the 1980s and rose to popularity in the US in the 1990s.

Without a doubt ska has set a musical standard for genres that follow it such as reggae and rocksteady.

The Specials were formed in Hall’s home city of Coventry in 1977, by Jerry Dammers, Golding and Panter – with Hall, Staple, Roddy Byers and John Bradbury joining in the following months.

They made a name for themselves with their ska and rocksteady style, and for providing a musical backdrop to economic recession, urban decay and societal fracture in the early 1980s.

The reggae punk band’s hits included Ghost Town, which spent three weeks at number one and ten weeks in the UK Top 40. Hall also released two studio albums and has collaborated with the likes Bananarama, Gorillaz and Lily Allen.

The band split in 1981, after which Hall, Golding and Staple went on to form Fun Boy Three, while Dammers and Bradbury released an album under the moniker The Special AKA, which spawned the hit single Free Nelson Mandela in 1984.

After undertaking a variety of solo and collaborative projects it was announced in 2008 that The Specials would be reforming for tour dates and potential new music.

In September that year, Hall and five members of the band performed at Bestival music festival under the name Very ‘Special’ Guests.

In 2009 he reflected on the performance, saying: ‘Bestival was a trial run. We did an unannounced slot so we could just could turn up, nameless. It was perfect.’

The Specials embarked on a 2009 tour to celebrate their 30th anniversary and in 2018 supported The Rolling Stones during a concert at Coventry’s Ricoh Arena.