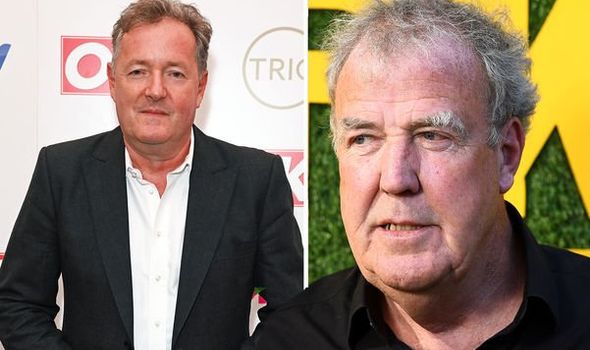 Piers Morgan, 56, and Jeremy Clarkson, 61, have had their fair share of spats over the years, but finally buried the hatchet last year. After leaving Good Morning Britain back in March, the 56-year-old has since signed a deal to join Rupert Murdoch’s talkTV.

This week, the journalist attended the media tycoon’s 90th birthday, where he came face-to-face with his former enemy Jeremy.

Piers claimed that the ex Top Gear congratulated him about his new job in person as he didn’t want to send it over text, where he could keep the evidence.

This however hasn’t stopped the presenter from sharing details about their encounter in his latest Daily Mail column.

“‘I was going to text you to say well done on your brilliant new deal, but then I thought you’d just put that in your column, and I can’t be seen to be saying positive things about you, obviously.

‘So, I decided to tell you in person tonight instead’,” Jeremy allegedly added.

Piers added of his response: “’Just to clarify, you’re paying me a compliment to my face so you can later claim you never said it?’, to which he claims his ex enemy confirmed.

The ex Good Morning Britain presenter and Jeremy were once embroiled in a long-running feud, which included physical fights.

The Grand Tour star once explained that he confronted Piers over unpleasant articles he had published about him.

After a disagreement, Jeremy punched the journalist in the head, which scarred his temple.

Piers previously told The Guardian: “I think it is fair to say he was a little inebriated.

“He did then try to apologise but sadly I wasn’t massively enamoured by this gesture, given the mounting inflammation to various parts of my skull – although I’ve frankly taken worse batterings from my three-year-old son.”

In December last year, the father-of-four revealed he had “declared peace” with his decade-long rival.

He said on Good Morning Britain: “I’m now in the unnerving position to confirm I have taken part in Celebrity Who Wants to Be a Millionaire?

“For a Boxing Day special appropriately, given that the host is somebody who once punched me three times in the head.

“It was as tense as you would imagine with Mr Clarkson and I.”

Last month, the journalist shared a snap of himself alongside Rupert on Twitter.

After months off the screens, he spilled to fans: “I’ve gone home. Great to be rejoining Rupert Murdoch’s News Corporation after 28 years.

“The place I started my media career, with the boss who gave me my first big break. We’re going to have a lot of fun.”