If you’re a frequent Snapchat user, you might’ve noticed the addition of Snapchat Charms throughout the past few months. I’ll get into more details about ’em later, but all you need to know right now is that they’re tiny Charms found in your Friendship Profiles that represent your Snapchat relationships with your buddies. Recently, Snapchat added even more Charms to its platform — and now, they can be found in your Group Profiles. Think of the Snapchat Charms for Groups as tiny rewards for each member, highlighting their specific accomplishments on the app.

Before I get into Group Charms, I’ll take it from the top. As I previously mentioned, Snapchat Charms started as icons found within Friendship Profiles that represent relationships and accomplishments of various Snapchat users. In other words, if you keep in contact with someone every day, you might see the "In Touch" Charm in their Friendship Profile. If you haven’t Snapped someone in a while, you might see the "It’s Been a Second" Charm on their Friendship Profile. Some people, on the other hand, have Astrological Sign Charms that represent their individual zodiac signs.

Overall, there are various Snapchat Charms that are assigned to different users, and a lot of them relate to their relationships with other people on the app. 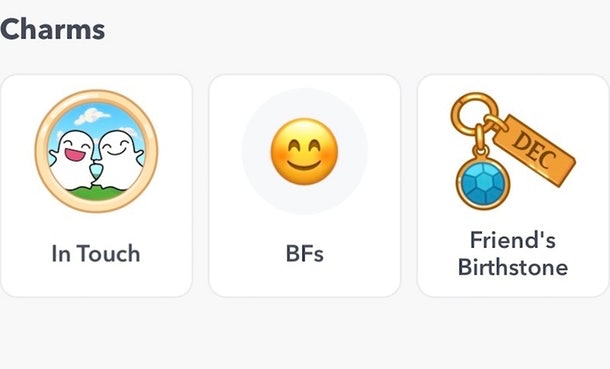 Now that you know more about Snapchat Charms, you’re probably wondering what Group Charms are. TBH, they aren’t too different from the original thing. The main difference, in my opinion, is that they can only be found in your Snapchat Group Profiles (as opposed to individual Friendship Profiles).

I’ll get into detail about how you can find those in a moment, but first, I’ll talk a little bit about the Charms specifically. Unlike the OG Snapchat Charms, Group Charms award members of a specific Group with honorary charms like "Most Nostalgic" and "Group Paparazzi." According to Snapchat, the winner of "Group Paparazzi" takes the most screenshots, and the winner of "Most Nostalgic" saves the most memories. There’s also a "Most Creative" Charm, which signifies the member of the group who’s sending the most Snaps.

TBH, it’s kind of like Snapchat’s version of yearbook superlatives. 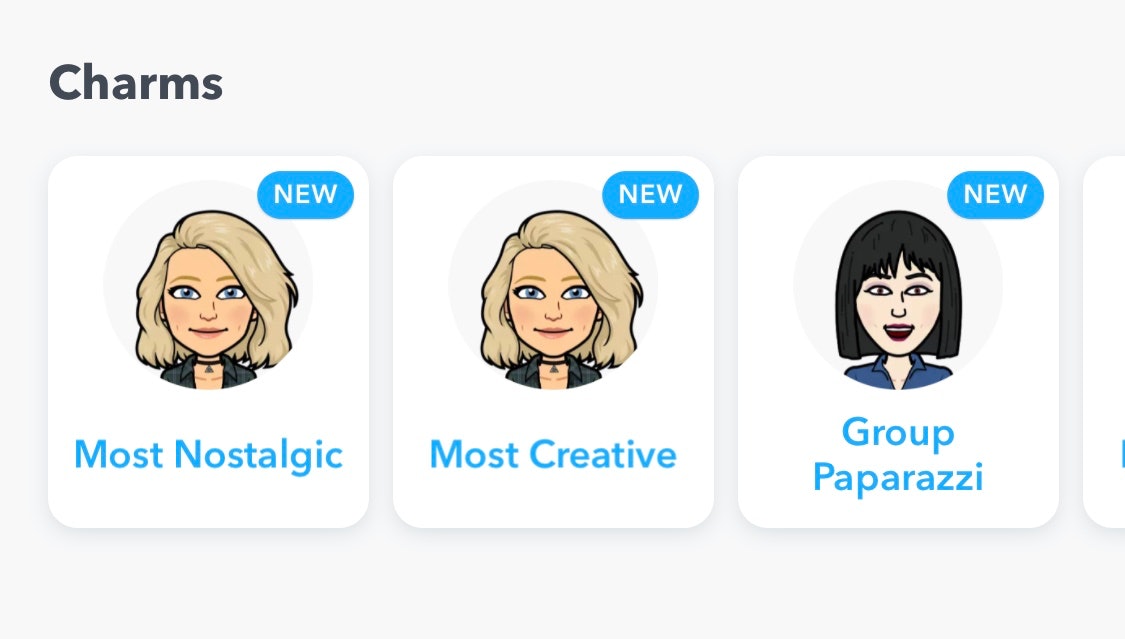 Now that you know what Group Charms are, you probably want to go and check if you scored any Charms (I didn’t, but that’s OK). In order to check, open your Snapchat app and click on your group’s Bitmoji. That should take you to your Group Profile (instead of your Friendship Profile). When you’re there, scroll all the way down to the bottom of your screen. There, should see Group Charms lined up in a horizontal row. When you see ’em, you’ll be able to click on each one and learn a little bit more about it.

OK, so, there’s one more thing you should know before searching your Snapchat app for Group Charms. According to Snapchat, iOS users are the only ones who can currently see them. I know, it’s a bummer — but hopefully Group Charms will make their way to Android phones soon.