This Morning presenter Alice Beer was replaced on Thursday’s show after her interviews with mourners who were queuing to see Queen Elizabeth II’s coffin were called ‘disrespectful’ by viewers.

The TV host, 57, was at Westminster on Thursday’s show as she was given press access to see the Queen lying in state.

Broadcaster and former ITV newsreader Isla Traquair was instead placed in the queue to speak to mourners. 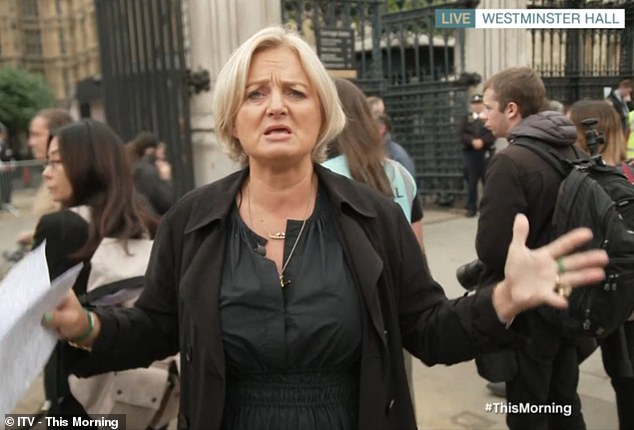 Show: This Morning presenter Alice Beer was replaced on Thursday’s show after her interviews with mourners who were queuing to see Queen Elizabeth II’s coffin were called ‘disrespectful’ by viewers

Introducing her, This Morning co-host Holly Willoughby said: ‘In just a moment we’ll speak to Isla Traquair who is keeping people’s spirits up in the queue.

‘First let’s hear from Alice who is at the exit at Westminster Hall. Alice, you were actually able to go inside and view the coffin earlier this morning. What was that moment like for you?’

Alice said: ‘Incredible. Just before dawn I was allowed into an appointed slot in Westminster Hall.

‘Let’s just be very clear, I didn’t take anyone’s place in the queue. I wasn’t queue jumping. This was a a slot for a reporter or member of the press so that I could tell you about it. Witness it and share it with you. And that was a complete honour.’ 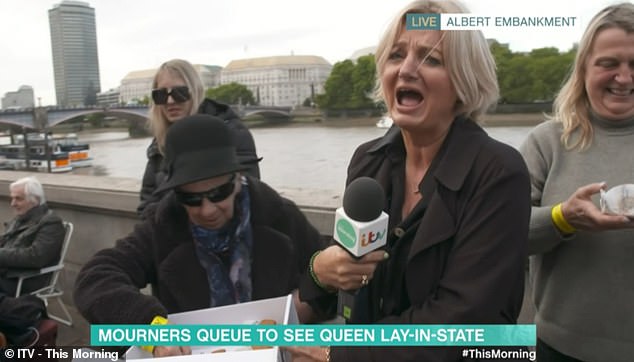 Segment: On Wednesday’s show, Alice interviewed mourners in the queue where she tried to keep people’s spirits up by handing out doughnuts 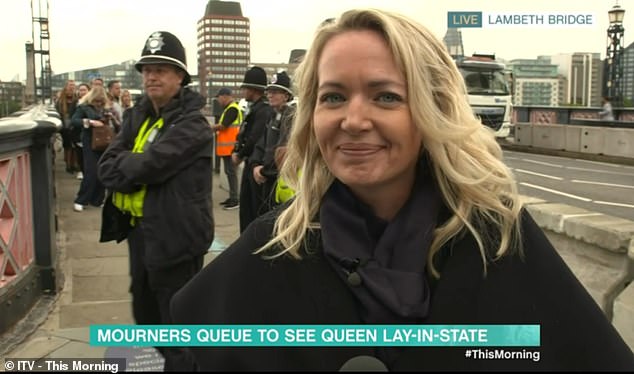 Queue: Broadcaster and former ITV newsreader Isla Traquair was instead placed in the queue to speak to mourners

On Wednesday’s show, Alice interviewed mourners in the queue where she tried to keep people’s spirits up by handing out doughnuts.

However, this didn’t go down well with many viewers who thought the light-hearted tone of the segment was ‘disrespectful’ to the Queen.

One user wrote: ‘@thismorning interviewing people like they’re queuing for a concert and treating it like a party?

‘And then the reporter saying to one guy ‘this is just a dress rehearsal for Reading Festival next year’… seriously?! Disrespectful is an understatement’.

Another wrote: ‘Can’t believe reporters are at the Buckingham Palace queues laughing, smiling and shouting about donughts as if it were a carnival. Show some respect! #ThisMorning’.

Reaction: Alice’s queue interviews didn’t go down well with many viewers who thought the light-hearted tone of the segment was ‘disrespectful’ to the Queen

Another viewer said: ‘Jesus wept, you are treating this queue like it’s the opening for the new ride at Alton Towers. Not a good look, have some respect #ThisMorning’.

One fan added: ‘Fair enough if Alice wants to give doughnuts to people in queues but it would be less disrespectful if it wasn’t being televised’.

Meanwhile, This Morning has been cancelled on Friday as ITV plan to broadcast King Charles III’s visit to Cardiff ahead of Queen Elizabeth II’s funeral.

Host Phillip Schofield confirmed during Thursday’s show that the daytime favourite would not be broadcast the following day to make room for rolling coverage of the event. 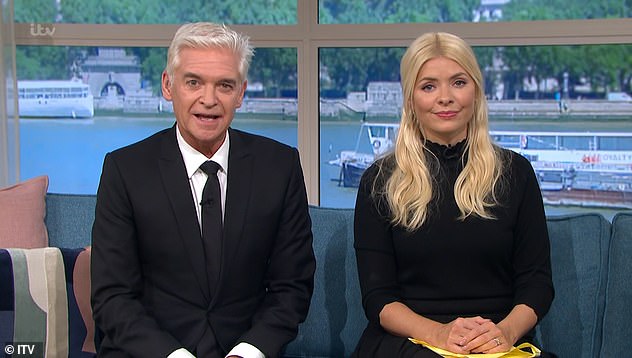 On hold: This Morning has been cancelled on Friday as ITV plan to broadcast King Charles’ visit to Cardiff ahead of Queen Elizabeth II’s funeral

It comes after ITV announced that will be airing uninterrupted coverage of the Queen’s funeral on Monday, September 19, in what will be the largest outside broadcast in the channel’s history.

The coverage will begin at 6am with Good Morning Britain, before leading into rolling broadcast of the funeral service, which will begin at 11am in Westminster Abbey.

Moving into the evening, ITV will broadcast a documentary film chronicling the events of the past ten days from Her Majesty The Queen’s death to the state funeral. 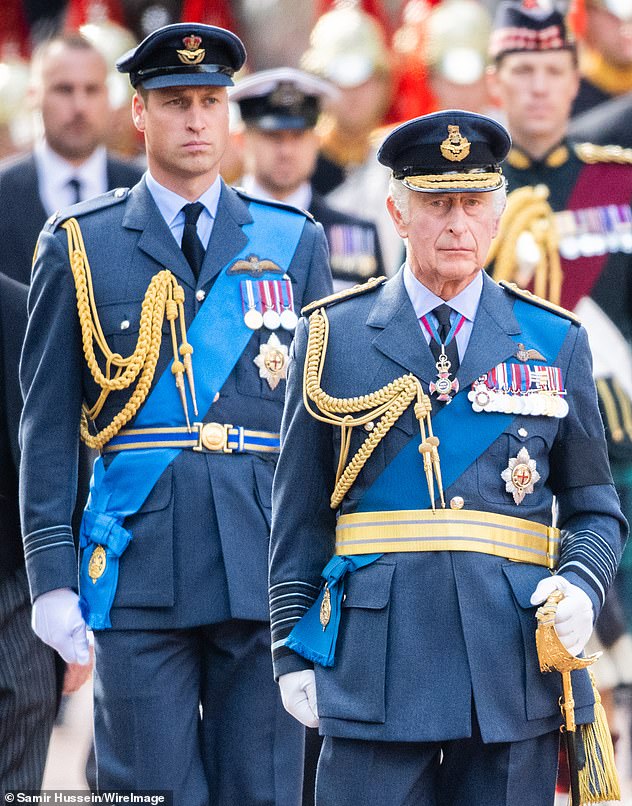 Sad: King Charles (pictured during the Queen’s procession on Wednesday) will travel to Wales on Friday as part of his condolence tour ahead of Her Majesty’s funeral

There will be a special programme focusing on the day’s events at 9pm followed by an extended News at Ten.

Buckingham Palace has released details of the 11am state funeral and the ceremony at St George’s Chapel in Windsor ahead of her private interment at 4pm on Monday.

After the state funeral, attended by some 2,000 guests, including visiting heads of state and other dignitaries, the late queen’s coffin will be transported through the historic heart of London on a horse-drawn gun carriage before being driven by the state hearse to Windsor.

Hour-by-hour guide to the funeral of Queen Elizabeth II on Monday, September 19

At dawn on the last day of national mourning, the King’s bodyguards will begin their final vigil at the Queen’s oak coffin in the Houses of Parliament. It will then close at 8.30am in preparation for the procession.

9am: Big Ben will strike

Big Ben will strike clearly, before the bell’s hammer is covered with a thick leather pad to muffle its strikes for the rest of the day, out of respect and deference to the late monarch.

10.30am: Queen’s coffin is carried from House of Parliament to Westminster Abbey

The Queen’s coffin will be moved onto the state gun carriage which will be outside the north door of Westminster Hall.

From there, it will be pulled by naval ratings using ropes instead of horses from the Hall to Westminster Abbey.

Enormous crowds of mourners are expected to line the streets in Westminster as King Charles and senior members of the Royal Family follow the coffin as they did at the funeral for Princess Diana and for Prince Philip. The military will also join the procession.

11am: The Queen’s coffin is carried to the High Altar

Around 2,000 guests including members of the Royal Family, Prime Minister Liz Truss, former British premiers, foreign dignitaries including US President Joe Biden, Australian Prime Minister Anthony Albanese and possibly Japanese Emperor Naruhito, and other VIPs, will fill the Abbey and watch as the Queen’s coffin is moved down the nave to the High Altar, before the nation falls silent. 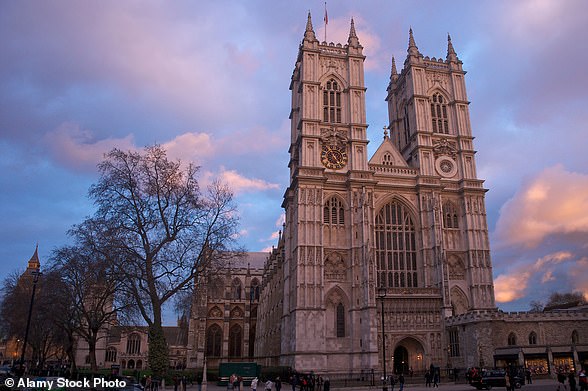 11am-12pm: The state funeral at the Abbey

The state funeral will be led by the Dean of Westminster and the Archbishop of Canterbury.

It is being televised and is expected to be beamed to millions around the world – and could well be one of the most watched live events in human history.

Royal experts believe that the choice of the Abbey could be both because it is so big – it has a capacity of 2,000 though can hold as many as 8,000 – and more live TV broadcasts have already been held there.

It is also believed that it could be a better place for large crowds to gather to pay their respects, since it is in Central London.

And the Abbey was the setting for many of the most important events of the Queen’s life – from her Coronation to her wedding to Prince Philip. The Princess Royal and the Duke of York, and the Queen’s sister Princess Margaret, were also married there.

Other royal funerals have been held at the Abbey, including Princess Diana’s in 1997 and the Queen Mother’s in 2002. The funeral of Earl Mountbatten of Burma, Philip’s uncle, was also held there in 1979. 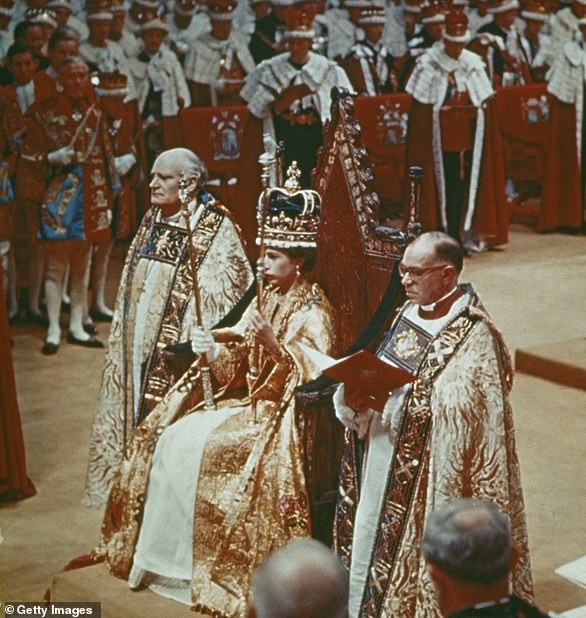 Queen Elizabeth II at her coronation ceremony in Westminster Abbey 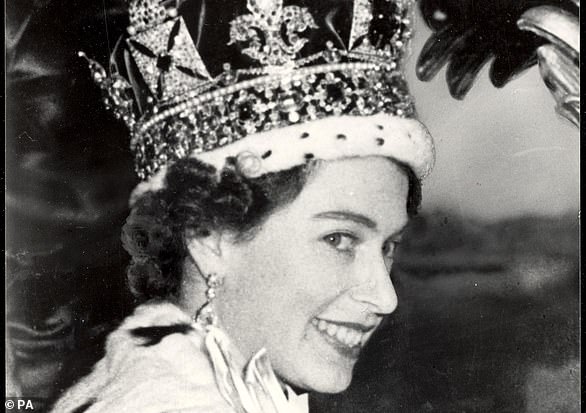 The Queen is photographed on June 2, 1953 smiling after her Coronation ceremony at Westminster Abbey in London

At the end of the service, the Last Post and Reveille will be played.

12pm-1pm: Queen’s coffin is carried to Wellington Arch via The Mall

The Queen’s coffin will then be placed back on the state gun carriage, before the royal funeral procession will solemnly move through Parliament Square, Whitehall, Constitution Hill and The Mall, past Buckingham Palace, to arrive at Wellington Arch at 1pm.

1pm-4pm: The coffin is transported to Windsor

Then the coffin will be transported to Windsor, where the Queen spent much of the last years of her life, to her final resting place at St George’s Chapel via the Long Walk. 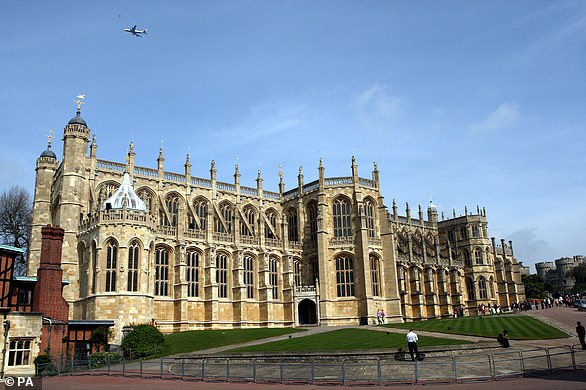 The Queen’s coffin will be lowered into the Royal Vault at St George’s Chapel in Windsor (pictured), where she will be buried alongside her husband the Duke of Edinburgh, her beloved parents, and her sister Princess Margaret 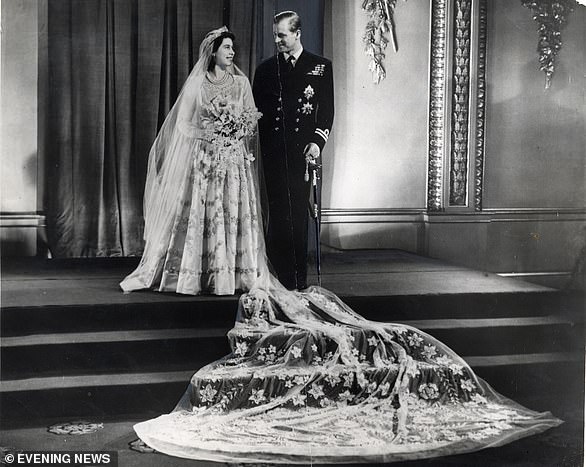 4pm: Queen will be buried at St George’s Chapel by her husband Prince Philip

The committal service conducted by the Dean of Windsor will then begin, and will also be televised around the world.

Before the last hymn, the Imperial State Crown, sceptre and orb will be removed from the Queen’s coffin by the crown jeweller.

Then at the end of the service, a lament will be played by a lone piper as the coffin is lowered into the Royal Vault, where she will be buried alongside her husband the Duke of Edinburgh, her beloved parents, and her sister Margaret.

King Charles and his closest family will return to the chapel for a private family burial service, where – as the late Queen did for her father – the monarch will scatter earth upon the coffin.