Amid speculation that Zoe Kravitz and Channing Tatum are dating, the ‘Big Little Lies’ star took a thinly veiled shot at ‘strangers’ speculating about her personal life.

Don’t believe everything you see. That was apparently the message that Zoë Kravitz wanted to send on Sept. 2. Among her rumored relationship with Channing Tatum, Zoë, 32, shared a quote to her Instagram. “Don’t forget to pretend to have your sh-t together for a stranger on the Internet today,” read the non-motivational quote. Zoë captioned the post with a question, asking, “Why are we like this tho?”

The message seemed to resonate with her friends and followers. “On it,” wrote iconic voice actress Cree Summer. “Love you,” added Juliette Lewis, along with a string of emojis. Zoe Saldana posted a string of “raising hands” emojis, celebrating Kravitz’s message. Others resonated with how they’re a “first-class mess here,” and how some have “stopped pretending.” “I can’t even pretend to have my sh-t together. That’s way too much work,” added another.

There was one fan who clapped back at Zoë’s comment: “Girl your summer so far has looked magical. Let’s not, lol.” Clearly, the fan was talking about how Zoë seemed to have found a new love with Channing, 41. The two have been working together on Zoë’s directorial film debut, Pussy Island, but that working relationship apparently turned into something more. The first talk of romance came in mid-August when the two were spotted riding around New York City, Zoë clinging to Channing while riding on the back of his bicycle.

They continued their NYC adventure the following day, and the paparazzi photographed Channing carrying many bags to Zoë’s car. Mere days after that, Channing and Zoë were photographed leaving a supermarket after picking up some household items. As Channing pushed a shopping cart, Zoë carried two bouquets of flowers. The couple was also spotted getting coffee together, with Channing turning on the charm to make Zoë laugh. 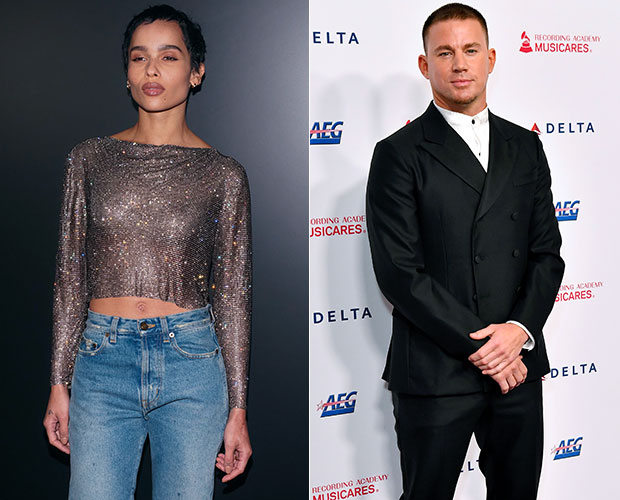 This rumored romance comes at a time when both Zoë and Channing are recently single. The Magic Mike actor split from his on-again/off-again girlfriend Jessie J in October 2020. In January 2021, Zoë filed for divorce, ending her and Karl Glusman’s 18-month marriage. Channing was also previously married to Jenna Dewan, but the couple split in 2018 and finalized their divorce the following year.

While Channing and Zoë have yet to publicly confirm their rumored relationships, some fans think Channing may have let the cat out of the bag. The 21 Jump Street star apparently followed a handful of Zoë fan accounts on Instagram — @ZoeKravitzInc, @ZoeKravitzSource, @KravitzUpdate, and @zkluv – which means his feed is now full of nothing but photos of his alleged girlfriend.