David Henry Hwang’s “Face Value” arrived on Broadway on March 9, 1993. It left five days later. For Gina Torres, an actress in that production, the news came as a relief. “Because we were pushing that stone uphill for a good long time,” she said.

“Face Value,” Hwang’s follow-up to the Tony Award-winning “M. Butterfly,” was a farce — and not entirely in the ways that Hwang and Jerry Zaks, the play’s director, intended.

In 1990, Hwang, the first Asian-American to win a playwriting Tony, joined members of Actor’s Equity in objecting to the casting of Jonathan Pryce as a Eurasian character in the Broadway production of “Miss Saigon.” Equity rejected the casting.

When the producer Cameron Mackintosh canceled the production, the union reversed the rejection, stipulating that Pryce could perform provided Asian-American actors were sought as replacements and that Pryce no longer used eye prosthetics or skin darkening bronzer as he had in London.

Hwang took the loss as only a playwright can. He went to work on “Face Value,” a comedy of mistaken racial anxiety that modeled on the farces of Michael Frayn and Joe Orton. It centers on a new musical, “The Real Fu Manchu,” and the pair of Asian-American actors, Randall and Linda, who plan to protest it on opening night at the Imperialist Theater.

“Fu Manchu” has cast a white actor in the title role and it includes a big number called “He’s Inscrutable,” so there’s a lot to protest. “It’s racist, sexist, imperialist, misogynist — and I didn’t even get an audition,” Randall complains. 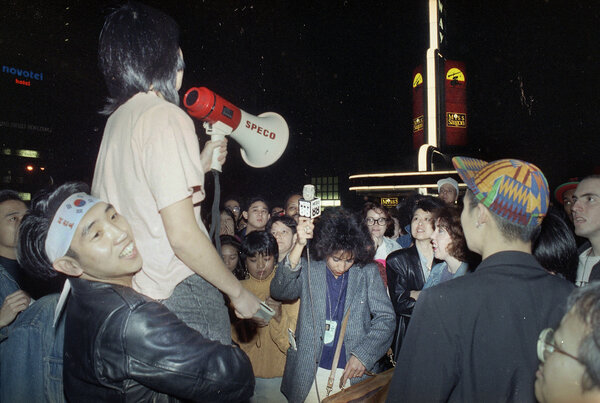 “I remember finishing the first draft and feeling well, this is going to need a lot of development,” Hwang recalled this summer.

But the producer Stuart Ostrow signed on immediately. Other producers, including Scott Rudin, soon followed. Zaks assembled a tiptop cast — Mark Linn-Baker as the white actor playing Fu Manchu; Jane Krakowski as a dithery actress; a then-unknown Torres as a put-upon stage manager; Mia Korf as Linda. (BD Wong, who had won a Tony for “M. Butterfly,” later joined as Randall.)

“It all came together probably too quickly,” Hwang said. “I was hubristic. I felt like, ‘Oh, I can fix it in four weeks, and then an out-of-town tryout in Boston.’ And I couldn’t.”

Torres remembers the first night of the Boston tryout. “Nobody laughed,” she said.

Frantic rewriting began, with new lines, new cuts, new scenes arriving nearly every day. “We might have cut intermission at one point,” Torres said, “like we’re going to hit them fast and furious and not give a chance to leave.”

It was an exhausting process — physically, emotionally. The play opened on Valentine’s Day to reviews that were less than loving. Hwang recalls one that ran with the headline “M. Turkey.”

But “M. Butterfly” also hadn’t done especially well out-of-town. So the producers made a decision to move forward. Torres remembered the excitement of walking by the Cort Theater and seeing her name on the posters. “We thought: ‘Oh, now we’re in New York. We can turn this around because New York has a more diverse audience. They’re waiting for us,’” she said.

Hwang began another round of revisions. Decades on, he couldn’t recall exactly what changed. “I’ve probably blocked a lot of that,” he said. But a New York Times article reported a new beginning and a new ending.

Somehow these made the play worse. The Boston script, Hwang said, at least had a certain singleness of purpose. The New York one, rewritten in desperation, did not. And it wasn’t any funnier.

Torres thinks that has more to do with content than with comedy. “It really made you look at the absurdity of color and the we perceive it in human beings, which is I believe, ultimately what killed us,” she said. She often wonders how it would play today.

“Face Value” shuttered after eight previews, with the producers, in a Times article, citing “a lack of box-office interest.” The actors moved on. Torres finally made her Broadway debut a year later with the barely longer lived “The Best Little Whorehouse Goes Public.” (“What it ain’t got is fun,” the Times critic wrote.)

It would take another decade for a Broadway show to close during previews, the Farrah Fawcett-starring “Bobbi Boland.”

Hwang moved on, too. “I can compartmentalize pretty well,” he said. But the idea of mistaken racial identity continued to nag at it him. He revisited it years later in the Obie-winning “Yellow Face,” a semi-autobiographical comedy that also took on the “Miss Saigon” controversy as well as newer strains of anti-Asian racism.

In “Yellow Face,” a character known as DHH mounts a Broadway play called “Face Value.” It flops in this fiction, too.

That real-life debacle bruised Hwang’s ego and deflated his boy wonder reputation. It didn’t keep him away from Broadway. He has had five further shows there, plus a 2017 “M. Butterfly” revival.

“Having a play close in previews on Broadway would generally be considered one of the worst things that can happen to your career, and it is, but I survived it,” he said.

“The worst thing happened to me,” he added. “And I’m still here.”