My eyes were on the sheep, and how could they not have been? With her black nose and creamy coat, this unflappable woolen creature was mellowness personified while a pack of dysfunctional humans railed around her.

Her real name is Annie, and she’s not quite four months old. Lounging in her spacious downstage pen, where she’d used a hoof to arrange her bedding just so, she was the lamb in Sam Shepard’s “Curse of the Starving Class” at Signature Theater. It’s a role so identified with the play that they sell windup sheep in the theater bookshop, and in her long scenes on the exploded-kitchen set, she could hardly have seemed more at ease. 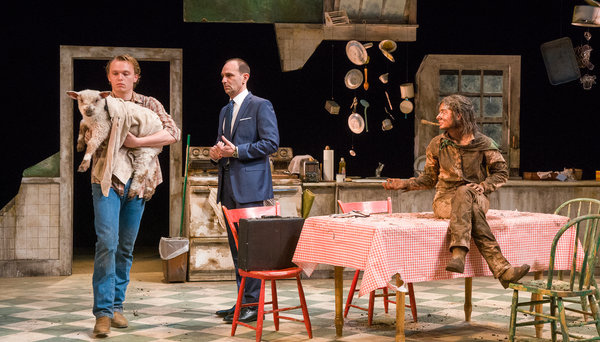 And I knew as soon as he said it that he was a kindred spirit: a theater lover who worries, reflexively, whenever animals are in a play. Are they being treated well? Are they scared? These anxieties are partly for them, but also for our own gooey hearts. I say that, mind you, as someone who has always hated classic westerns because the horses fall down. As for circuses, I’ll go to the kind that has only humans in it.

Onstage, playwrights and directors know the power of putting animals in a show: They affect us viscerally, in ways that human actors can’t. Their presence can be glorious. It can also be fraught. That’s true whether the animals are live or puppets, seen onstage or (like the dog in “Yen,” Off Broadway in 2017) just vividly talked about. Which sounds strange until you consider what an act of imagination theater is, how much we’re projecting onto it.

Still, I’d thought for years that I was the only one who braced herself against plays involving animals, particularly those in peril, or who regarded “War Horse” with dread, despite the magnificence of its puppetry.

Then, a couple of seasons ago, into my inbox popped an email from a tough-minded fellow critic. I’d just reviewed a show at St. Ann’s Warehouse, one that it somehow hadn’t occurred to me to worry about. Based, like “War Horse,” on a children’s book by Michael Morpurgo, “946: The Amazing Story of Adolphus Tips” was also set in wartime, and also had a puppet animal at its center — a feline named Tips, separated from the little girl who loves her. Not having seen it yet, Elisabeth Vincentelli had a bashful question: Does anything awful happen to the cat?

“I have a hard time with lost animals,” she added, “even offstage puppets!”

We critics, some of us, are tenderer than you’d think.

“I LOVE YOU FOR SAYING THAT,” I wrote back. “Fear not: Tips is just fine.” To be safe, though, I warned her about a mention of drowned kittens and the puppet chicken whose neck is wrung in front of us — spoilers that would fit right in on a crowdsourced site Elisabeth later told me about, doesthedogdie.com.

All fur and vulnerability

Live animals onstage inspire a species of awe. You can see it on Broadway in “The Ferryman,” when the gentle Tom Kettle plucks a rabbit (real name Pierce) from his coat pocket — a trick that may have grown old to his neighbors in the play but is electric for the audience: this tiny, darling, pulsing presence, all fur and vulnerability.

But there’s often a startle effect, too, as with that show’s live goose: so large and unmistakably real that when she appears she brings an element of risk, a potential for unscripted action. What might this creature do? Because no matter how well-trained she is, that bird (real name Peggy or Gertie, depending on the performance) has been drafted into a human enterprise.

It matters deeply, then, how the animals in a show are being treated. (If the veteran animal trainer William Berloni’s name is in the program, as it is for both “The Ferryman” and “Starving Class,” I instantly relax.)

One of my most uncomfortable theatergoing experiences, several seasons ago, was at an Off Off Broadway play with an increasingly distressed live chicken onstage. It was a political show, and the bird seemed to be intended as a tool of provocation, to shame any audience members who cared about its pain in a world filled with human suffering.

Martin McDonagh took the opposite attitude in one of his plays, where the survival of a small fur creature in a landscape of man-made carnage delivered a heart-leapingly happy ending. On Broadway, the show went to some lengths to preserve the surprise, so I won’t mention it by name. But it was an affecting, even ambushing, use of an animal cameo.

Then there was Daniel Fish’s 2003 production of David Rabe’s “The Black Monk,” which starred Sam Waterston at Yale Repertory Theater. My indelible mental image of it involves a miniature horse — or was it a pony? (I asked Mr. Rabe, but he couldn’t recall.) Breathtakingly real as it stood onstage and stomped the occasional hoof, it seemed nonetheless like some majestic apparition, too dreamlike to be true.

Such grandeur is the territory where “War Horse” lives, though that show freed the imagination — and sharpened it — by using intricate, galloping, large-scale puppets to play its animals. When we gaze on an inanimate object and imagine it sentient, we’re agreeing to fill in all sorts of blanks about what it feels and thinks and wants.

This is how puppet animals — like Joey, the affectionate equine hero of “War Horse”; or Rose, the soulful canine romantic in Lee Breuer’s “La Divina Caricatura”; or the smart and lonely ape at the center of Nick Lehane’s play “Chimpanzee” — climb into our hearts. The puppeteers supply movement, which is the spark of life, while we supply the sympathy. As investments go, that can have a rich payoff.

Or not. I confess to having sympathized so acutely with the mammoth puppet star of “King Kong,” on Broadway, that when one of his arms was badly bitten by a giant snake on Skull Island and Kong fell asleep on the wound, it demolished my suspension of disbelief. Um, wasn’t that arm just hurting? Like, a lot?

That’s the kind of fanciful leap I tend not to be able to make with live animals onstage. I’m too aware that, in a realm of artifice, they are solidly themselves in all their catness or birdness or sheepness.

I may be in the minority there, though. Watching Annie the lamb, I heard the spectators ahh when she was carried in for her first entrance, and I heard them chuckle when she did something sweet. So far, I was with them.

But toward the end of the play, when that bad and bloody thing happened offstage? Surely they knew it was coming. Still, I heard them gasp.