“The Good Lord Bird,” the Showtime mini-series about the incendiary career of the 19th-century abolitionist John Brown (its seven-episode run ended Sunday night), offered a stylish, consciously cockeyed view of America on the brink of the Civil War — more Lin-Manuel Miranda than Ron Chernow. But its fantastical-seeming story, based on the National Book Award-winning novel of the same name by James McBride, is more factual than casual students of American history might assume.

The show, like McBride’s novel, uses an invented sidekick character (an enslaved boy masquerading as a girl nicknamed Little Onion, played by Joshua Caleb Johnson) to frame a simultaneously awe-struck and irreverent portrait of Brown, played by Ethan Hawke as a Bible-quoting revolutionary determined to wage a violent holy war against American slavery and its defenders.

But many aspects of the narrative — including the roles of more prominent historical figures like Frederick Douglass and Harriet Tubman, and much of the depiction of Brown’s fateful, would-be insurrection at a federal arsenal in Harpers Ferry, Va. (now part of West Virginia) — are lifted directly from the historical record.

Here is a guide to what was fact and what was fiction in the series, based on the writings of historians and contemporaneous New York Times reporting. (Spoilers historical and otherwise follow.)

What did John Brown hope to achieve at Harpers Ferry?

Onscreen: Brown declares his intention to “ignite the fuse that will start a great war to end slavery.”

In real life: Brown spoke frequently of his desire to provoke just such a conflict, though it didn’t play out as he had envisioned. He described himself as engaged in an “eternal war against slavery,” according to the historian Tony Horwitz, and referred to slavery itself as “a most barbarous, unprovoked and unjustifiable war of one portion of its citizens upon another portion.” Unlike other abolitionists, Brown thought that the violence of slavery demanded violence in return. In a precursor to the Harpers Ferry raid that became known as the Pottawatomie Massacre of 1856, he and his men murdered five settlers in Franklin County, Kan., in retaliation for an attack on abolitionists in the territory. Afterward, a defiant Brown said he had aimed to “strike terror in the hearts of the proslavery people.”

The raid at Harpers Ferry, conducted three years after the Kansas killings, was the first step in a grand plan for an armed rebellion that would conquer slavery throughout the land. In an interview printed in The New York Times in 1859, after Brown’s arrest, his wife, Mary, said that her husband had hoped to spark the revolt for much of his adult life.

“He had been waiting 20 years for some opportunity to free the slaves,” she said. “When at last the enterprise at Harpers Ferry was planned, we all thought that the time had now come.” 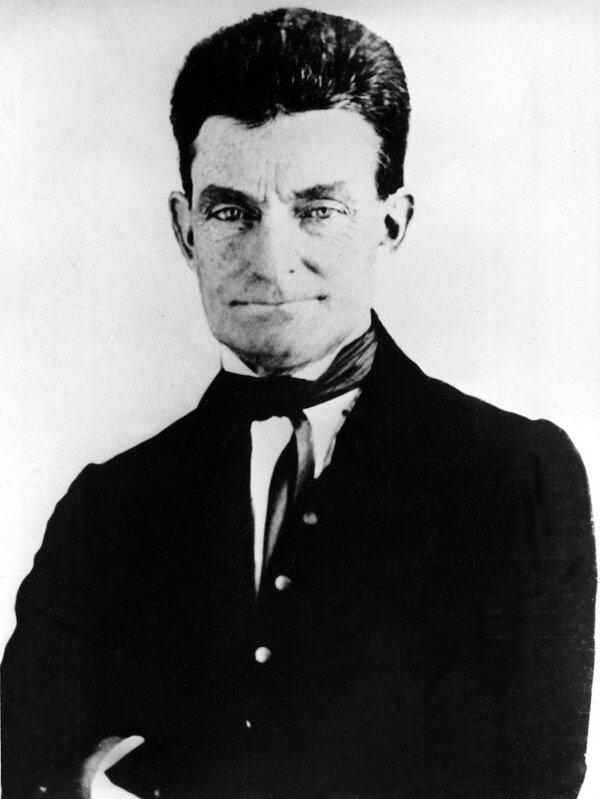 How did he plan to achieve it?

Onscreen: In Episode 4, Brown outlines his plan to raid the armory at Harpers Ferry with a small band of Black and white fighters, arm thousands of free and enslaved Black people in the region and retreat to the Blue Ridge Mountains, “defeating the pro-slavers as we go.” He claims that Douglass (Daveed Diggs) and Tubman (Zainab Jah), whom he meets with in earlier episodes, will rally the support of thousands near and far. To finance the operation, he relies in part on the support of a mysterious cabal of benefactors in New England known as the “Secret Six.”

In real life: Brown’s plans were close to what was depicted. He chose Harpers Ferry as his target because the armory there was known to be lightly guarded, and because of its location in Virginia, seen as a gateway to the slaveholding South. Brown grew up in Virginia and felt his knowledge of the borderlands there would be useful during what he anticipated would be a long battle to overthrow its government. As The Times reported in a story about the raid that included an interview with Brown: “He expected to receive a rapid increase of allies from abolitionists everywhere settled through Maryland and Virginia, sufficient to take possession of both states, with all of the Negroes they could capture.”

Brown did indeed appeal to Douglass, a friend who once said that Brown “though a white gentleman is, in sympathy, a Black man,” and to Tubman, who he had sought out a year earlier. But neither took part in the raid. Douglass, who disapproved of the use of violence, wrote that he had warned Brown that “he was going into a perfect steel trap, and that once in he would never get out alive.”

The “Secret Six” were a real committee of wealthy abolitionists — Gerrit Smith, Samuel Gridley Howe, Franklin Benjamin Sanborn, George L. Stearns, Thomas Wentworth Higginson and Theodore Parker — who had backed Brown’s exploits in Kansas. Years after the Harpers Ferry raid, Sanborn, using a pseudonym, wrote that the group had supplied Brown with $500 and some weaponry for the mission.

Who took part in the raid?

Onscreen: Brown arrives in Virginia in October 1859 with around a dozen men, including four of his sons (Owen, John Jr., Salmon and Jason), Ottawa Jones of Kansas, and several free Black men, including Lewis Leary, Dangerfield Newby, O.P. Anderson and Attucks Copeland, a student at Oberlin College. Douglass’s associate, Shields “Emperor” Green, parts ways with Douglass to fight with Brown. Onion and an oafish abolitionist named Cook, who were dispatched to Harpers Ferry in advance, recruit a handful of locals to the cause, including several slaves of the prominent resident Col. Lewis Washington — the great-grandnephew of George Washington. Washington himself is kidnapped and held hostage during the fighting. An important subplot involves an enigmatic train conductor, known only as The Rail Man, who is tasked with rounding up further Black recruits.

In real life: Just three of Brown’s sons participated in the raid (he had at least 20 children), and not the three that are depicted on the show. Owen was there guarding a supply house near the arsenal, but John Jr., Salmon and Jason were not present. It was two of Brown’s other sons, Watson and Oliver, who joined in the attack.

With the exception of Onion, the other raiders — Jones, Leary, Newby, Anderson, Copeland, Green and Cook — are based on real characters, although Jones didn’t participate in the raid. Lewis Washington really was taken hostage. But the real life “Rail Man” wasn’t an accomplice of Brown’s. He was a porter named Heyward Shepherd who was shot and killed tragically during an attempt by Brown’s men to seize the town’s central train station.

Onscreen: The plan begins to go awry long before Brown even arrives in Harpers Ferry and crumbles further at nearly every turn. Because of Cook’s antics in the town, nosy neighbors discover Brown’s plot, forcing him to move up the date of the attack and foreclosing the possibility of assistance from Tubman. A miscommunication leads to The Rail Man’s death and the scattering of would-be recruits. After Brown and his men seize the engine house of the armory, the mayor of the town is shot and killed while attempting to negotiate, causing a furor. Federal troops arrive, among them the future Confederate general J.E.B. Stuart (Wyatt Russell), and after a tumultuous two-day shootout, Brown and his men are easily overtaken, still waiting in vain for an army of imagined sympathizers.

In real life: John Cook, one of Brown’s acolytes, was sent to Harpers Ferry in advance to gather intelligence and liaise with the townspeople there, including Lewis Washington. But the story of his antics, and of their fateful consequences for Brown’s mission, is largely the show’s invention. As for the hoped-for rendezvous with Tubman, the historian Kate Clifford Larson suggests that the Underground Railroad pioneer did at one point recruit former slaves to fight with Brown, but it’s unclear why the two failed to connect at the time of the Harpers Ferry raid.

The rest of what is shown in the series (aside from the Onion story line) is based on true events. Brown’s men expected that thousands of free and enslaved Black people would join their efforts and were dismayed when they failed to materialize, according to interviews in The Times. After early reports of the incident reached Washington, Robert E. Lee, then a lieutenant colonel in the U.S. Army, led a company of federal troops, Stuart among them, that surrounded Brown’s men at the engine house and shut down the uprising. In the end, 16 people were killed. Ten of Brown’s combatants, including his sons Watson and Oliver, were among the dead. Five insurgents, including Owen Brown, escaped. John Brown and six others, including Cook, were captured and jailed.

What were the consequences?

Onscreen: Brown writes a series of letters from prison that turn him into a martyr figure and bring national attention to his cause. Ralph Waldo Emerson, Henry David Thoreau and Walt Whitman are said to be among his champions. After a visit from Onion, during which he expresses peaceful resignation about his fate, Brown is hanged. His last words are “What a beautiful country.” Narration from Frederick Douglass provides his eulogy: “John Brown’s zeal for the cause of freedom was infinitely superior to mine. I could live for the slave, John Brown could die for him.”

In real life: Brown’s letters, in which he described his vision for a post-slavery America in eloquent and spiritual terms, were hugely influential in accelerating the abolition movement and putting slaveholders on the defensive. In the presidential election of 1860, pro-slavery Southern Democrats, determined to take a more aggressive stance to defend the institution, split the party vote, helping to clear a path for the Republican candidate, Abraham Lincoln. Brown, along with the rest of his captured men, was indeed hanged, although it’s unclear what his last words were. In one of his letters from prison, he wrote “I am worth now infinitely more to die than to live.” In the audience for the hanging were Lt. Col. Lee, future Confederate general Thomas “Stonewall” Jackson and John Wilkes Booth, Lincoln’s future assassin.

In addition to Emerson, Thoreau and Whitman, Brown’s admirers included the poet Julia Ward Howe, wife of the “Secret Six” member Samuel Gridley Howe, who took a popular folk song about Brown, “John Brown’s Body,” and turned it into “Battle Hymn of the Republic.” Douglass’s quote from the show is taken from an address he gave in 1881 at Storer College, a school founded for freed slaves after the Civil War in the town of Harpers Ferry.