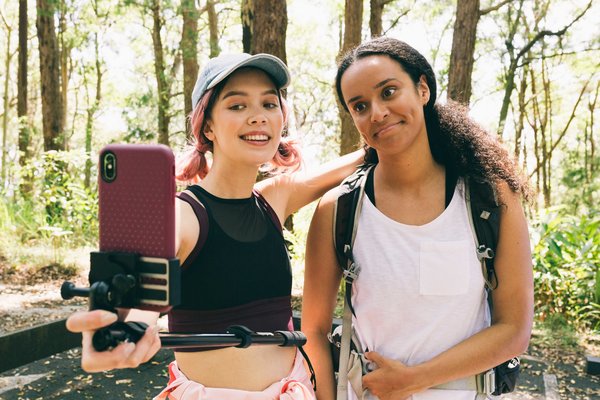 SYDNEY, Australia — When Que Minh Luu pitched a new comedy to her boss at Australia’s national broadcaster, the ABC, she asked a seemingly contradictory question: “Can I make a TV show that you can’t show on TV?”

The answer was yes.

“Content,” which premiered worldwide on YouTube, Facebook and Instagram this week, is billed by the ABC as the first scripted comedy shot from the perspective of a phone. Viewers are encouraged to watch the show, a vertical video series, on their smartphones.

The comedy, which seems to play out in real-time, was mostly shot on an iPhone held by the two actresses. In the first episode, a woman’s live streaming of her car crash goes viral, a satirical premise that has already proved plausible: A short clip of the car crash’s live stream did go viral on Twitter this week, with many users apparently convinced that it was real footage.

“Content” is the latest attempt by television producers to reach younger viewers on digital platforms rather than a television screen or laptop.

“We were convinced there was a story to be told about people’s online lives that we hadn’t seen yet,” said Luu, who is an executive producer for the ABC. “Our phones reveal our most intimate secrets.”

Set over seven episodes of seven to 15 minutes long, “Content” follows a wannabe influencer, 23-year-old Lucy (Charlotte Nicdao) as she tries to gain followers. As she becomes increasingly obsessed with her online image, her relationship with her real-life best friend, Daisy (Gemma Bird Matheson) falters.

With episodes released weekly at 6 p.m. Sydney time, producers hope that “Content” will attract the attention of commuters looking for entertainment on their phones.

“It is a deep dive into influencer culture,” said Nicdao, whose Lucy is a myopically selfish millennial with pink-tinged hair and a rabid desire to be famous.

As more and more of people’s lives and relationships are lived online, film and television producers are experimenting with storytelling — like “Content” — told entirely through phone and computer screens.

In 2014, the low-budget horror movie “Unfriended,” in which a group of teenagers in a video chat were picked off one by one by an anonymous user, grossed $64 million globally.

And this year the final season of “Broad City” opened with an episode tracking how best friends Abbi and Ilana celebrate the former’s 30th birthday, played out via the friends’ social media updates. It was filmed on iPhones, with emojis and captions added in postproduction, as on “Content.”

Many Facebook Watch shows are designed for young audiences watching on their phones. Perhaps Facebook’s most successful series has been “Red Table Talk,” a talk show with Jada Pinkett Smith as host that has over six million followers and regularly makes headlines.

“It’s no secret that the TV broadcasters are looking for younger viewers,” said Andrew Hunter, the news partnerships lead at Facebook Australia. “And we are confident that we can experiment together to test the appetite of younger viewers.”

This year Samsung unveiled a new television that can switch between a horizontal and vertical screen, with the vertical mimicking a smartphone viewing experience.

The creators of “Content” wanted to ensure that the phone format would aid their storytelling rather than smother it. Inspiration came from the writer Anna Barnes’s own online life: When she was hacked on Instagram, she incorporated it into a story line. On the show, Lucy is ordered to pay cash to someone who threatens to reveal her compromising Instagram direct messages.

Yet tension on the series typically stems from the more mundane emotional landscape of Lucy’s phone. At one point she accidentally likes a photograph of her ex-boyfriend — providing a familiar lurch in the stomach to anyone who has ever secretly looked up an ex online.

Walter Woodman, who co-directed “Content,” believes that shows like this — written for mobile, shot on mobile and watched on mobile — are the future.

“It’s how we experience our lives — it’s how we’re talking to each other right now,” he said. “As we put more and more of our experience onto our phones, then we need to tell stories through those experiences.”