CHICAGO — Going to the theater while traveling can feel a lot like mall shopping: Many of the offerings look strangely familiar. The same shows, or ones quite similar, keep turning up everywhere, as if they were Cinnabons.

Not so here, in a city with more than 200 professional theaters offering 100 performances a night. Because most of the 200 have specific missions with audiences to match, very few of the 100 feel like franchises.

That’s true at both ends of the scale. Court Theater, on the campus of the University of Chicago, has an annual operating budget of $5 million. The Griffin Theater Company, with no permanent home, gets by on less than one-tenth that amount. And yet, on a recent trip, I found both companies producing works I wouldn’t have seen anywhere else.

In the case of Court’s production of “The Adventures of Augie March,” that’s at least in part because the play is a world premiere. David Auburn’s adaptation of the 1953 Saul Bellow novel was commissioned and custom-built for the theater’s 251-seat thrust stage. It also seems tailored to the local community; much of the story takes place in the city — some of it even at the University of Chicago, where Bellow taught for decades.

Mr. Auburn, who first broached the idea four years ago, might have spared himself some trouble by choosing an easier work to adapt. Bellow’s semi-autobiographical bildungsroman is not just long but also episodic and ornate. Its astonishing energy comes from the contrast between its perky, picaresque structure and its muscular, high-flying prose.

That contrast proves difficult to achieve in theatrical terms. Even severely edited, the story of Augie’s first 30 years — spent among immigrants, bohemians, lowlifes and nouveau riches — takes three acts, three hours and 13 actors playing 40 roles to deliver. As staged in a story theater style by Charles Newell, Court’s artistic director, it also features an abundance of approaches and narrative modes, many of which make great moments.

Those usually involve the people (and animals) who surround Augie as he tries to locate or invent a true self. Georgie, his mostly mute “idiot brother,” is brought to life through abstract movement developed by the choreographer Erin Kilmurray and touchingly performed by Travis Turner. Sequences in which Augie tries to train an eagle to hunt iguana are thrillingly staged as shadow plays by Manual Cinema, creators of a recent “Frankenstein” here.

Choral declaiming, pantomime and the use of chairs to suggest most settings are also on the menu; effective as they all are, the result is a stylistic hodgepodge, whereas the book is a monolith.

Not that the play feels inauthentic. Mr. Auburn, himself Chicago-born and a University of Chicago graduate, knows the territory intimately. (“Proof,” his 2001 Pulitzer Prize-winner, was also set here.) But weird things happen when translating prose as dense as Bellow’s into dialogue. What seems awesome and nutritive on the page can seem hollow and unengaging when spoken. Sometimes paring away the language reveals the drama in it; sometimes it reveals the lack of drama.

Mr. Auburn tries to correct for this by breaking the book’s first-person narration into shards and assigning it to various characters as if to suggest that Augie isn’t so much a person as a collective identity: America of a certain bootstrap scalawag vintage. Even the eagle speaks.

What’s lost in that translation is Augie himself. Patrick Mulvey does get the character’s strange combination of fecklessness and charisma just right; he moves genially from adventure to adventure without building much of a life along the way. But without Bellow’s chewy mega-paragraphs of interior speculation, the character is little more than a balloon. He floats by on winds of lovely stagecraft. 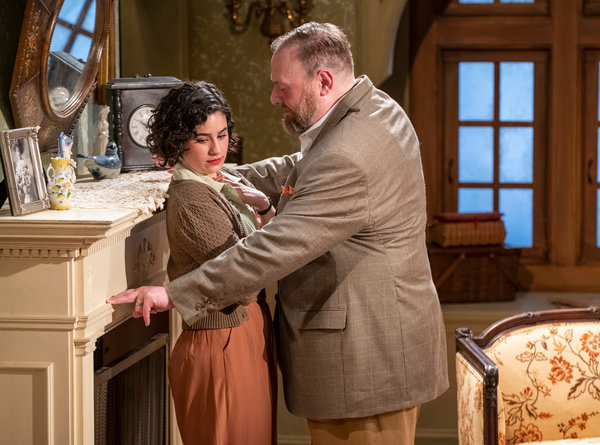 A lot more leaden are the Ardsley family of Kent as portrayed in the Griffin production of W. Somerset Maugham’s “For Services Rendered.” That makes sense, because they’ve come through World War I diminished in various ways they refuse to acknowledge.

Sydney, the son, was blinded; he does little but knit and sputter. The three daughters each suffer from the decimation of the local male population, either making poor choices among them or having no choices at all.

Eva has nearly resigned herself to a spinsterhood of caring for Sydney; as a different kind of duty, Ethel has married a brutish farmer who served in the war. That brute has propositioned the youngest daughter, Lois, because — why not? — you only live once, as a veteran knows. But Lois is looking to escape dusty old Kent, hitching a ride on a rich married gentleman she otherwise finds disgusting.

In the period manner — “For Services Rendered” was first produced in London in 1932 — Maugham manages to keep these and several other stories bubbling without leaving the Ardsleys’ house. The claustrophobia of interwar England is further suggested, in the Griffin production, by narrowing the action to one room.

That’s an expressive choice, even if it wasn’t quite voluntary; there wouldn’t have been space or money for three different sets in the 89-seat theater where the play is performed at the Den, a six-theater multiplex in the Wicker Park neighborhood.

There are other shortfalls. The non-Equity cast is spotty, and some of the costumes look like salvage. The direction, by Robin Witt, sometimes emphasizes the qualities in Maugham that soon made this kind of melodramatic potboiler the stuff of Monty Pythonesque satire. Characters are always saying “I say” and “old boy” and dashing off to play tennis.

And yet the production does sufficient justice to the qualities that still make Maugham compelling. I don’t mean the jigsaw construction; that’s merely technique. But the moral vision that sees how quickly and falsely people put disasters behind them, thus readying themselves to step blithely into new ones, is not small and not lost on us now.

Or is it? When I said I’d be unlikely to see “For Services Rendered” anywhere else, that’s because almost no New York company — certainly no commercial one — would stage it. To make it possible, you’d have a theatrical ecosystem that keeps audiences and theaters and the material they’re passionate about in fruitful equilibrium. Griffin’s mission includes “building bridges of understanding between generations”; it often produces classic works that feature large casts.

That should be economically unviable, and yet with ticket prices topping out at $37, the house here was as full as the Ardsleys’.

Also playing the same night at the Den were a revival of Michael John LaChiusa’s “Queen of the Mist,” a new musical called “La Havana Madrid” and “Four Places,” a debut drama.

That seemed emblematic of the Chicago scene generally. The Den may be a mall in the sense that it offers many wares under one roof, but the wares are one-of-a-kind.

The Adventures of Augie March

An earlier version of a picture caption with this article misspelled the given name of an actress. It is BrittneyLove Smith, not BrittanyLove.

Jesse Green is the co-chief theater critic. Before joining The Times in 2017, he was the theater critic for New York magazine and a contributing editor. He is the author of a novel, “O Beautiful,” and a memoir, “The Velveteen Father.” @JesseKGreen • Facebook