Welcome to Best of Late Night, a rundown of the previous night’s highlights that lets you sleep — and lets us get paid to watch comedy. If you’re interested in hearing from The Times regularly about great TV, sign up for our Watching newsletter and get recommendations straight to your inbox.

A new Quinnipiac poll has Joe Biden leading President Trump by 13 points, with Bernie Sanders and Pete Buttigieg also ahead of the president. Of course, as late-night hosts lamented, voters don’t always do what the polls say they will.

“So the polls look bad for Trump, but I don’t know. Can I trust them? I’ve been hurt before. My psyche is still processing the feelings from Election Night 2016, and my liver’s still processing the bourbon. Dare I love again? Oh, who am I kidding? I can’t stay mad at you, polls. You had me at ‘Trump’s losing.’” — STEPHEN COLBERT

“If you want to know how much these polls matter, just ask President Hillary Clinton.” — JIMMY FALLON

Trump suggested that the polls were fake, and that he was leading in several states where he was said to be behind.

“The New York Times reported that after being briefed on a devastating 17-state poll conducted by his campaign pollster, Trump told aides to deny that his internal polling showed him trailing Joe Biden in many of the states he needs to win. I wouldn’t be surprised if they were making up new states just to cheer him up. ‘Good news, Mr. President. You’re winning big in Old Jersey, East Dakota, Californication and Blorf.” — SETH MEYERS

“Yes, they are winning in every state they’ve polled: Delus-iana, Chaos-sachusetts and Denial-vania.” — STEPHEN COLBERT

“So they suppress numbers, but first they made up the numbers, and the numbers don’t even exist. Can you imagine Trump giving an alibi? [As Trump] It couldn’t have been me, officer. I was asleep the whole time. Plus I was at work. The crime didn’t occur, and I don’t exist. Smoke bomb! I’m gone.” — STEPHEN COLBERT

In Iowa on Tuesday, Biden made a bold campaign promise: “We’re going to cure cancer.”

“Which explains why just this morning President Trump came out in support of cancer.” — CONAN O’BRIEN

“That would be great. It’s touched his life. It’s touched so many lives. But, please, if you can cure cancer, could you maybe just do that now? … President or no president, people might vote for a candidate who promises to cure cancer, but they would definitely vote for the guy who’s already done it.” — STEPHEN COLBERT

Biden also took a few shots at Trump, but as Stephen Colbert noted, “the only president Biden seemed to mention more than Donald Trump was Barack Obama.”

“We get it. You know Barack Obama. We understand. We concede that. At this point, you should change your slogan to ‘Biden 2020: Obama 2012!’” — STEPHEN COLBERT

“Thirteen. That is a lead that is so big, it’s ready for a bar mitzvah.” — STEPHEN COLBERT

“To win, all Biden has to do between now and next November is stop talking.” — CONAN O’BRIEN

“Right now, the sitting president of the United States, the leader of the free world, is trailing the mayor of South Bend, Ind. That’s like the heavyweight champ being knocked out by your cousin who claims he knows karate.” — STEPHEN COLBERT

“Trump’s behind everybody. Actually, I just heard right now he’s even losing to the Thailand women’s soccer team.” — JIMMY FALLON

Mindy Kaling is turning 40 this month, which James Corden and Adam Scott assure her is “glorious” because you have “less [expletive] to give.”

What We’re Excited About on Thursday Night 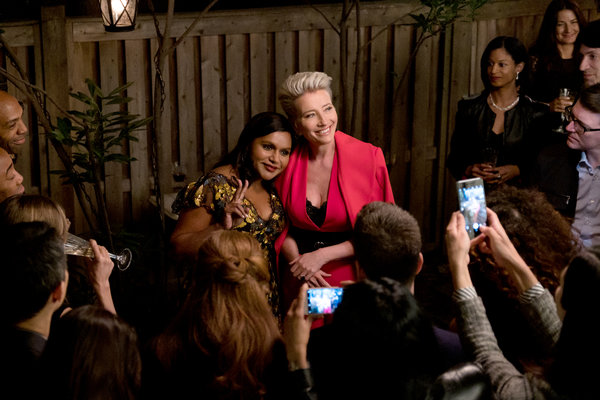 With films like “Late Night” and “Little” and hit shows such as “Veep,” Hollywood is reconsidering its take on the all-powerful woman boss.