The filmmaker Larissa Bills wasn’t the only girl growing up in the 1970s to obsess over “A Very Young Dancer,” Jill Krementz’s photo-driven look at the life of a 10-year-old student at the School of American Ballet during “Nutcracker” season. When she was given the green light to direct “On Pointe,” a documentary about the school, she went straight to eBay.

“I just needed to see the book again,” said Ms. Bills, who grew up in Colorado and Texas. “I loved that there was this place, and it was in New York, and the kids were a part of these big productions. It was very thrilling to me as a young kid.”

What stuck with her was how the book captured the world of ballet from the perspective of a child. “That’s what I wanted to take a cue from: Letting these kids tell their own stories and showing what their daily life is,” she said. “That they ride four trains, that they shop for ballet shoes, that they have to go to rehearsal six nights a week. But there’s joy in that, and those kids really want to be there.” 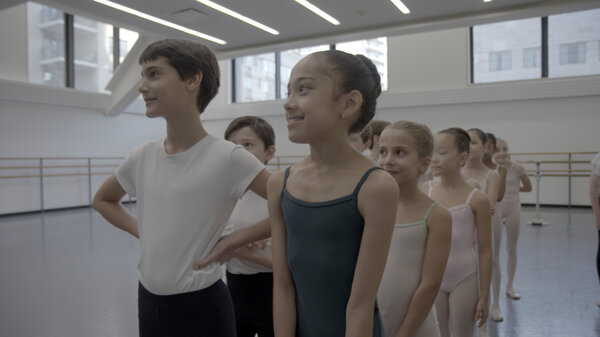 “On Pointe” — a six-part documentary produced by Imagine Documentaries and DCTV that will be released Friday in its entirety on Disney+ — is like an expanded, cinematic version of “A Very Young Dancer” for this generation. While that book followed one student, “On Pointe” tracks several — Ms. Bills’s subjects range from 9 to 17 years old — at the New York City Ballet-affiliated school, which was formed in 1934 by the choreographer George Balanchine and the philanthropist Lincoln Kirstein.

Ms. Bills, 50, who has worked in documentary films for 25 years, said that most of her projects of late have been on the depressing side. “I’ve been in prisons in Oklahoma or in OxyContin places or orphanages,” she said. “This was so special, and it felt so New York-y — and like the New York that I moved to when I was 18.”

The plan was to cover a year in the life of the school, 2019-2020, following the students on and off the Lincoln Center campus. Ms. Bills’s approach was to maintain a small, consistent crew “so that we could kind of disappear into the wall and not be such a presence,” she said. “I really wanted to capture the actual work that was going on and not be a distraction.”

In preparation, she watched Frederick Wiseman’s ballet films, with their observational, fly-on-the-wall approach. “We obviously couldn’t be that silent,” she said, referring to the way Mr. Wiseman resists traditional voice-over and interviews in his films. “We had to provide some kind of narrative.”

The solution was to have the students informally narrating their own stories in voice-over. “Dance is so beautiful,” Ms. Bills said, “you want to see it, you don’t want to talk it. That was my feeling.”

There are multiple stories happening at once, but Ms. Bills leaves room for them to breathe as she cuts between the advanced division and the children’s division, whose students can perform in productions with City Ballet, including “George Balanchine’s The Nutcracker.” The older dancers, chosen from auditions held across the country and from the children’s division, focus on their training. The school’s mission? To produce dancers who will actually get jobs.

Becoming a professional ballet dancer is arduous work. As Kay Mazzo, a former City Ballet principal who is the chairman of faculty at the school, points out early in the documentary, “Ballet is an unforgiving art form.”

For Ms. Mazzo, the documentary shows what the school really is and what Balanchine, who died in 1983, left behind. “The manners, the respect — the respect he had for all the children,” she said in an interview. “The minute those elevator doors open, you’re somewhere where you respect everybody and you behave. You see those children pulling themselves together the best they can in those classes, the little ones and the older ones.”

What drives a child to dance? The students’ focus and commitment were two things that impressed Ron Howard, who founded Imagine Entertainment with Brian Grazer, when he visited the school. It’s not like “these students are going to wind up signing 10-year, multimillion-dollar contracts,” he said in an interview.

But Mr. Howard was also struck by the ordinariness of the scene. “It’s a bunch of kids running around, and they’re kind of hanging around in the hallway and they’re talking, and they’ve got their backpacks and they’re on their cellphones and they’re joking,” he said. “You’d feel like it would be any sort of middle school or high school hallway.”

And then they would go to class: “Their bodies transform, their movements transform, and it’s just an incredible reminder of what human beings can do when they focus their energies and their passion in this really remarkable way,” he said. “I was blown away.”

No, “On Pointe” is not another cliché-riddled rendering of the ballet-torture story. “Listen, I loved ‘Black Swan’ when I saw it,” Ms. Bills said. “But that wasn’t what we were making. And it also wasn’t what I was seeing.”

During this pandemic moment when theaters are shuttered, the documentary plays a different role. In normal times, now is when audiences would be going to see “The Nutcracker.” It’s a ritual that closes out each year. Ms. Bills’s documentary helps to fill that gap: It captures the weeks leading up to the 2019 “The Nutcracker,” showing the rehearsal process in sparkling, candid detail.

While filming “On Pointe,” she oversaw a five-camera shoot of the ballet, which is being shown on Marquee TV. Once you’ve seen how the steps have been taught and how roles have been won, the production — even though it isn’t live — somehow makes the story of their lives complete. This is what all the hours in the studio are for: the stage. And you grasp the enormity of getting “The Nutcracker” onstage and the responsibility the children have.

Dena Abergel, City Ballet’s children’s repertory director and a former company member who works most closely with the young cast, was relieved to see how one of her most difficult days — casting — was captured.

“I think that most often people from the outside assume that it’s a very cutthroat kind of rejection or excitement in getting a role,” Ms. Abergel said. But she always tells the children that being in “The Nutcracker” isn’t going to make or break their lives.

And just as integral are details — short and sweet — that reveal much about the connection between the school and City Ballet. During an onstage dress rehearsal, Georgina Pazcoguin, a City Ballet soloist, sews her pointe shoes while chatting with a group of young Angels. “Are you guys excited?” she says. “This is a super fun time.”

One Angel seems as though she’d like to call the whole thing off. We can’t see her face, only hear her tiny voice as she says, “I’m also nervous.”

Ms. Pazcoguin turns to face her. “Oh, don’t be nervous,” she says. “This is what you practice for!”

“I know, but there are going to be thousands of people,” the young dancer replies.

“Listen, you don’t have to think about the thousands and thousands,” Ms. Pazcoguin says, waving a hand dismissively toward the seats. “You just have to go out there and be true to yourself.”

You see that kind of support and camaraderie throughout “On Pointe,” among the young students and also among the teenagers, who are dealing with higher stakes than “The Nutcracker.” They want jobs, preferably in City Ballet, but there are only a few to go around. Ms. Bills’s original plan was to capture the school’s famed Workshop Performances, a showcase that unveils the next generation to the world. But the pandemic got in the way.

“I so wanted to go through that process as a filmmaker,” Ms. Bills said. “This is the blessing and the curse of making a real-time documentary. We shot what was happening.”

The sixth episode looks at how the school and its students responded to the shutdown of New York City. “It’s important for audiences to see how that actually worked,” she said. “I know it’s hard, but I find a lot of hope in the way that we were able to wrap up and the fact that these kids are still doing it, whether they’re present or not.”

One featured student, Gabrielle Marchese, who is now 12 and goes by Gabbie in the film, is continuing her ballet training on Zoom. “I keep telling myself, at least I’m dancing,” she said, “because I know girls who aren’t dancing at all.”

For her, the school is not just a place for ballet; it’s also a home away from home. “We’ve been there for so long, with the same group of people,” she said. “I spend more time at S.A.B. than at home usually. So although it’s a hard-working place, it’s a safe space for all the dancers.”

As for competition? She shrugged it off. Yes, the students pretty much all want the same thing — to join City Ballet — but she prefers to think of it in another way.

“We’re all kids with the same common dream,” she said. “We want to dance. Most of us are going to be in this for a long time. So might as well make some friends along the way.”