“I am large, I contain multitudes,” Walt Whitman wrote in “Song of Myself.” And these days, New York includes an unusually large and varied amount of its most celebrated literary son.

The bicentennial of his birth on May 31 is being celebrated with events around town, including a marathon reading of “Song of Myself” in Brooklyn Bridge Park on Monday. But even those who miss the festivities can immerse themselves in all things Whitman at three different exhibitions running deep into the summer.

“Walt Whitman: America’s Poet,” at the New York Public Library, surveys the landmarks of the poet’s public career, drawing in large part from its rich holdings. “Poet of the Body: New York’s Walt Whitman,” at the Grolier Club in Manhattan, takes a more intimate look. And Walt Whitman: Bard of Democracy,” which opens at the Morgan Library & Museum on June 7, features items from the Morgan alongside loans from the Library of Congress (including an errant 19th-century butterfly with a back story as colorful as its wings).

The exhibitions showcase manuscripts, books and photographs, but also some more unusual traces of the poet whose name, the exhibition at the New York Public Library puts it, stands as “a byword for the notions of inclusivity, equality, sensuality and the value of the individual.” 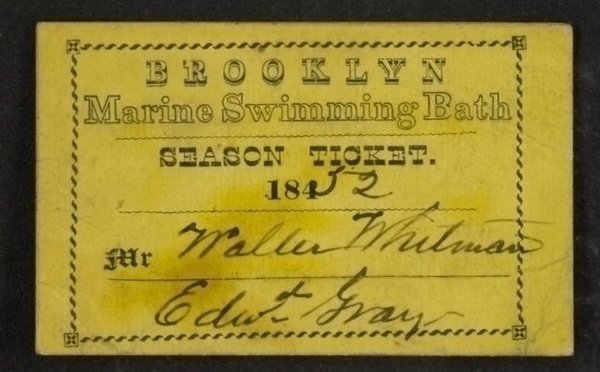 Whitman has long been something of a literary mascot for Brooklyn, where he first moved at age 4 with his family. He helped build the city both literarily, and literally. In the 1840s and ’50s, before he published any poetry, he worked as a journalist and also as a carpenter. This season ticket for the Brooklyn Marine Swimming Bath from 1852, on view at the Grolier, gives his name as “Walter Whitman.” On the reverse is a handwritten receipt for masonry work he commissioned for a house he was building.

“Leaves of Grass,” Whitman’s revolutionary collection of free-verse poems celebrating nature, the body and the vastness of America, which first appeared in 1855, stands as one of the landmarks of 19th-century American literature — “our cultural Declaration of Independence,” as the Whiman scholar Karen Karbiener, who curated the Grolier show with the private collector Susan Jaffe Tane, put it. He spent much of his life revising and reworking the book, which first appeared as a small volume of 12 untitled poems but grew to include more than 400. As it evolved, Whitman, a onetime printer’s apprentice, took charge of all elements of its physical presentation, starting with the radically simple title page of the 1855 first edition and its frontispiece featuring a slouchy image of the poet.

From the beginning, Whitman’s carefully cultivated personal style commanded almost as much attention as his verse, and not all of it was appreciative. This caricature in Harper’s New Monthly Magazine in 1860, the year of the third edition of “Leaves of Grass,” carried a mocking caption: “Gifted by nature this subject — with a head that’s swollen — with Literary talent — is allowed to go to Grass.”

From the late 1850s through 1862, Whitman frequented the underground vaults of Pfaff’s, a beer cellar in Lower Manhattan, which the Grolier show calls “America’s first bohemian hangout and probably its first gay bar.” It was there that he met Fred Vaughan, a stagecoach driver who was probably his lover, and who helped inspire the homoerotic poems first published in the third edition of “Leaves of Grass.” This photograph, from 1865, shows Whitman with a Confederate soldier whom he met in Washington, where he moved in 1862 and became a volunteer nurse in a military hospital, and with whom he formed an intense romantic friendship. Whitman’s own caption reads “Walt Whitman and his rebel soldier friend Pete Doyle.”

The three exhibitions include many Whitman manuscripts, from lines scribbled in notebooks to neater specimens like this signed copy of “O Captain! My Captain!,” his 1865 poem about the death of Abraham Lincoln, at the Morgan. Whitman, who struggled financially much of his life, copied it out in 1890, two years before his death, and sold it to a friend for $100. Not that the poem, which hewed to a conventional rhyming meter, was one of his own favorites: “Damn My Captain,” he reportedly said in 1888. “I’m almost sorry I ever wrote that poem.”

Whitman may have resented the fact that “O Captain!” eclipsed his other work, but it didn’t stop him from milking it. His dramatic reading of it provided a climactic moment to the popular lecture about the martyred president that he began giving on the anniversary of the assassination, starting in 1879. Whitman, who delivered the lecture seated in a rocking chair, drew partly on details from Peter Doyle, who had been at Ford’s Theater the night Lincoln was assassinated.

Whitman was the most photographed poet of the 19th century, and more than 130 different images of him are known to survive, including ones taken by Mathew Brady and Thomas Eakins. He was also up-do-date on the latest technologies, like stereography, an early form of 3-D imaging. He had several stereographic images of him produced, among them this 1871 example.

The 1860 edition of “Leaves of Grass” had the image of a butterfly alighted on a man’s finger under the table of contents, an image he restaged in a famous 1877 photograph of himself. Whitman once suggested that it was a “literal” butterfly, but in fact it was a cardboard butterfly, which will be on display at the Morgan. Still, that fake butterfly once almost fluttered away. In 1942, the Library of Congress sent some of Whitman’s notebooks out of Washington for safekeeping during World War II. They went missing, but when they turned up at auction in 1995, the butterfly was tucked safely inside one of them.

The New York Public Library is displaying a clipping of Whitman’s hair, alongside a souvenir box holding stones from his grave in Camden, N.J., where he died in 1892. The Grolier show includes a very scraggly gray sample that may have come from his beard, as well as this friendship ring containing a neatly braided clipping that belonged to Alma Johnston, a close friend and patron of the poet’s.

In recent years, Whitman has been used to market international mega-brands like Levi’s and Volvo, which used his poem “Song of the Open Road” in a cinematic 2016 commercial. His posthumous career as a product pitchman started early. Beginning in the 1930s, a canned goods company in Camden, N.J., operated a chain of Walt Whitman stores, which sold Poet brand products and held “Miss Walt Whitman” pageants for female clerks.

Through July 27 at the New York Public Library, Stephen A. Schwarzman Building, nypl.org/waltwhitman

Jennifer Schuessler is a culture reporter covering intellectual life and the world of ideas. She is based in New York. @jennyschuessler