After more than a year of performing and teaching online, the Trisha Brown Dance Company re-emerged before a live audience on Thursday evening. And not just in any old performance space, but on the tranquil, spectacular grounds of Wave Hill, the 28-acre oasis in the Bronx whose lush lawns and gardens look out over the Hudson River and Palisades.

The anticipation was heightened by this week’s stormy weather, as capricious as one of Brown’s dances. In place of performances originally scheduled for Tuesday and Wednesday, both canceled, the company offered two shorter, back-to-back programs in one night. It was worth the wait for the backdrop of nearly cloudless skies, which turned from blazing to pale blue as late afternoon heat gave way to dusk. 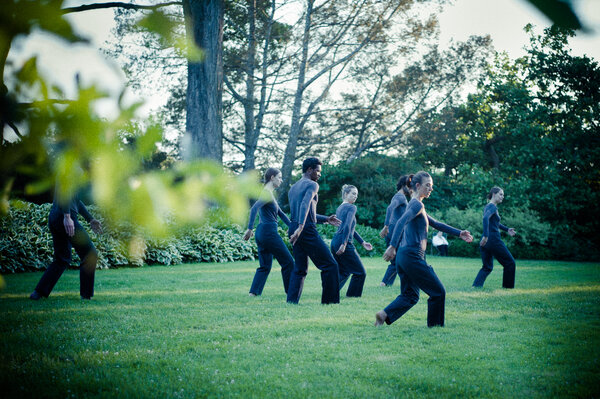 The selected pieces — four of Brown’s early works from the 1970s and an excerpt from her less frequently seen “Another Story as in falling” (1993) — migrated from the central Great Lawn, with its river views, to the sweeping North Lawn, with a stop at the elevated Aquatic Garden. Part of the “In Plain Site” series, which situates Brown’s work beyond theater walls, the program revealed, as this series often does, the adaptable nature of her choreography, its capacity to slip into unforced conversation with a new environment. Wherever it goes, it has a way of fitting in, not an intrusion but an extension of its surroundings.

That sense of belonging is also a testament to the company leaders who stage the work — in this case, the associate artistic director Carolyn Lucas — who know its architecture inside and out, and what settings will complement it. The cubic geometry of “Locus” (1975), performed by three dancers, each within the corners of a square platform, echoed the right angles of the pergola behind them, its stone columns and leafy canopy framing their measured reaching and folding.

“Solo Olos” (1976) wasn’t built for rolling and skidding in the grass, but it seemed that way as four performers followed the instructions of a fifth: to “reverse,” “branch” or “spill,” according to the score that guides this partly improvised work. (The dancer Cecily Campbell gave a helpful introduction orienting us to its structure.)

From those opening pieces, we were ushered up through winding paths to the Aquatic Garden, where Amanda Kmett’Pendry and Leah Ives stood facing each other on opposite sides of a long rectangular pool. As if poised to dive in, they danced “Accumulation” (1971), in which simple movements stack up one by one: rotating thumbs, a swerve of the hips, a rise up onto the balls of the feet. “Uncle John’s Band” by the Grateful Dead replaced what had until now been a spontaneous soundtrack of bird song and planes passing overhead.

On the expanse of the North Lawn, the full company of eight broke into pairs for “Leaning Duet I” (1970), in which partners walk side by side, grasping each other by the wrist and leaning in opposite directions, their feet making contact with each step. When two pairs meet, one threads under the bridge of the other’s linked arms. (During the second show, a shaft of golden-hour sunlight ran parallel to the dancers’ diagonal pathway.) It’s a game that often results in one partner tipping to the ground, to be hauled back up by the other, as both try to maintain the integrity of the shape. There are no mistakes, just trying and trying again.

In “Another Story,” also for eight dancers — who this time remained largely apart and upright — stillness brought the body and the landscape into focus. Gently creased limbs, suspended midstride, looked like scaled-down branches of a towering elm nearby.

But perhaps more than any discrete shape or structure, it’s the cycles within Brown’s work that made it such a natural fit at Wave Hill. Replete with stealthy repetition, with endings that bleed into beginnings, her vision merges just right with gardens in full bloom.