For his last big show in Europe in 2013, Rudolf Stingel covered the floors and walls of the Palazzo Grassi in Venice with an Ottoman-style synthetic carpet. Now he’s taking over the Fondation Beyeler in Basel, Switzerland, with an exhibition of work from the last three decades.

Mr. Stingel, who is based in New York, has devoted his career to redefining painting. While he produces plenty of abstract and photorealist works, he is better known for eschewing paint and canvas altogether — making art out of Styrofoam, carpeting and aluminum-faced foam insulation, which viewers scratch and scrawl over.

In an interview before the Basel show, which runs through Oct. 6, Mr. Stingel described the Fondation Beyeler as “one of the most important institutions we have in the world,” and said it was humbling to have a solo show there.

The exhibition is curated by Udo Kittelmann, director of the Neue Nationalgalerie in Berlin, who said he had worked on three other exhibitions by Mr. Stingel, an artist who “takes so many risks.”

“Rudolf is always shifting between figurative, abstraction, soft materials, hard materials,” Mr. Kittelmann said. “They have in common the power of painting.”

Painting is no longer about dipping a brush in paint and leaving marks on a canvas, Mr. Kittelmann said. “This is over.”

For him, painting means creating an image, so even a performance or a film could qualify as one.

In the case of Mr. Stingel’s work, he said: “You see it, touch it, walk over it, and it stays in your mind. It’s not an easy work to forget.” 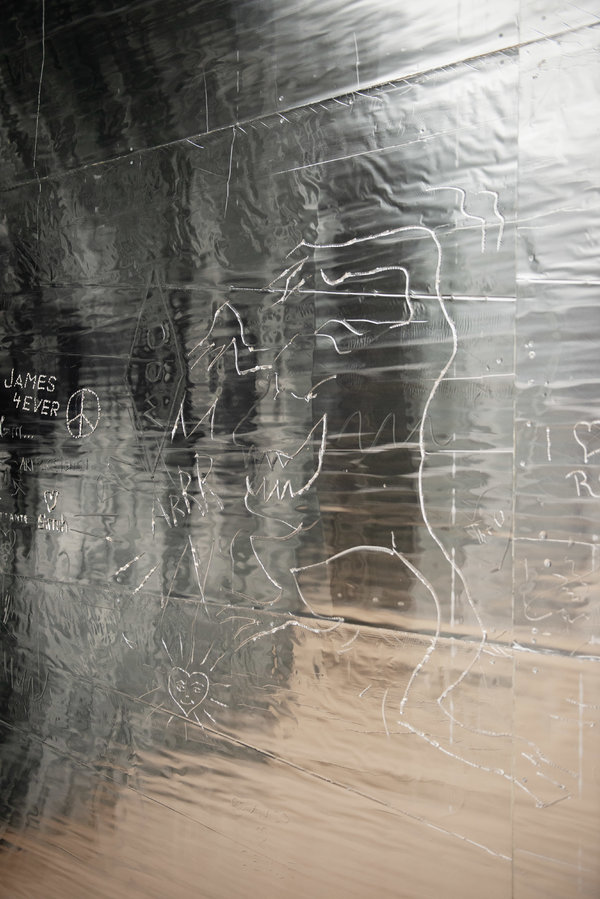 Mr. Stingel was born in 1956 in Merano, a town in south Tyrol, Italy, near the Swiss and Austrian borders. He came of age in the late 1960s and 1970s, a time of rebelliousness and irreverence, when “questioning” was “what art was supposed to be,” he recalled in the interview. His early works were silvery paintings — made with a layer of tulle — that had red, yellow or blue undertones.

The New York art scene was completely different, “more conceptual,” and posed an instant challenge to the 30-year-old artist.

“In Europe, you never had to deal with the question ‘What is your work about?’” he said. “I had no idea what my work was about.”

So he looked back at the art he had made and produced a manual titled “Instructions” in six languages, with black-and-white photo illustrations. The book described how he made his paintings: by applying paint (blended with an electric mixer) on a canvas, laying a piece of tulle on the canvas, spraying the tulle with silver paint, then taking the tulle off. Anyone reading the manual could, in theory, make a Stingel painting.

It was “like a manifesto,” and it “changed everything,” Mr. Stingel said, remembering how it gave sudden meaning to artworks he had created before.

Two years later, inspired by the color of the book’s cover, Mr. Stingel covered the floor of the Daniel Newburg Gallery in New York with an orange carpet, leaving the white walls completely blank. In a subsequent site-specific exhibition, he covered another gallery’s wall with carpet, inviting visitors to make a mark by running their hands over the thick surface.

By the turn of the millennium, Mr. Stingel had started presenting industrial Styrofoam boards as paintings. The boards were covered with scratches and marks or with footprints left by the artist’s shoes dipped in acid.

In 2001, Mr. Stingel (unwittingly) made his biggest work of participatory art — covering every surface of a room in the Museum of Modern and Contemporary Art of Trento and Rovereto in Italy with Celotex reflective silver insulation boards.

“I saw right there at the opening that some people were scratching in and writing their names,” he recalled. “There was a moment of: ‘Should we or should we not let them do it?’ I just said, let them do it. I came back a few months later, and I couldn’t believe my eyes.” (The work has now become a Stingel trademark; Basel visitors will see a site-specific Celotex work in the exhibition, as well as in the Fondation Beyeler’s restaurant.)

An invitation from the billionaire art collector François Pinault to take over the 18th-century Palazzo Grassi — one of Mr. Pinault’s two Venice exhibition venues — was “a big problem: I just had to find a common denominator for the whole thing.”

The solution was the “historical gesture” of the carpet, a glimpse at Venice’s past as a trading post with Asia. Mr. Stingel lined the palazzo’s large atrium and both of its floors of galleries with a synthetic carpet printed with the enlarged image of a red Ottoman carpet. He hung a few of his grisaille paintings on the carpeted walls.

“Mr. Stingel is among the great anti-painting painters of our age,” wrote Roberta Smith of The New York Times in her review of the show, “a descendant of Warhol but much more involved with painting’s conventions and processes, which he alternately spurns, embraces, parodies or exaggerates.”

“His art asks what are paintings, who makes them, and how?” she added.

Meanwhile, Mr. Stingel continued to produce paintings in the conventional sense of the word. In 2005, he exhibited a series of photorealist paintings. He had been asked to put on a show at the Paula Cooper Gallery in New York, he said, but “I really didn’t know what to do.”

Mr. Stingel continued: “I decided to paint a portrait of Paula Cooper and put that one painting in the gallery. After Paula Cooper, the next step was myself.”

The Basel show also has examples of more conventional paintings, including a large photorealist depiction of a spray gun and a series of five abstract works in shades of pink, purple and silver.

Mr. Kittelmann said the aim of the Basel exhibition was “to create an atmosphere that, hopefully, doesn’t keep the audience at a distance.”

In the case of Mr. Stingel, that wasn’t hard.

“People really like his work: It’s not just the art experts,” he said. “They immediately understand what the work is about. Emotionally, they get it.”