Eight D.C.-area institutions that had reopened to the public will again temporarily close their doors, starting Monday. 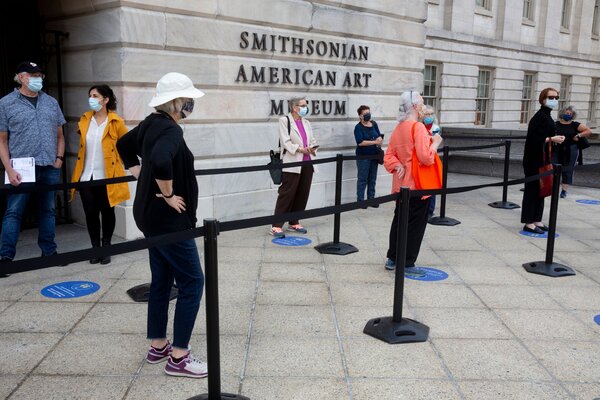 As coronavirus cases increase across the country, the Smithsonian will once again temporarily close eight of its Washington-area institutions on Monday.

“The Institution’s top priority is to protect the health and safety of its visitors and staff,” the Smithsonian said in a statement. “We will use this time to reassess, monitor and explore additional risk-mitigation measures.”

Seven museums and the National Zoo, which had all reopened by Sept. 25, will be shutting again, the statement said.

No reopening date was announced.

The decision came as a second wave of closures is being announced by museums in a number of states around the nation. In recent days, officials in Oregon, Illinois and several other states announced new virus restrictions that will require museums to close once more, and several prominent institutions in Philadelphia, including the Philadelphia Museum of Art, announced plans this week to close again.

The Smithsonian’s New York City museums, the Cooper Hewitt, Smithsonian Design Museum and the National Museum of the American Indian George Gustav Heye Center, have been closed to the public since March 14.

The Smithsonian had gradually reopened eight of its Washington-area institutions this summer, beginning with the National Zoo and the National Air and Space Museum’s Steven F. Udvar-Hazy Center in Chantilly, Va., on July 24.

The National Museum of African American History and Culture, the Smithsonian American Art Museum, the National Portrait Gallery and the Renwick Gallery followed later, on Sept. 18. “We have not had any infections of staff, which means our safety protocols are working,” the Smithsonian’s secretary, Lonnie G. Bunch III, told The Washington Post at the time.

Like the rest of the country, the nation’s capital has seen a surge in cases in the past few weeks: 156 new coronavirus cases were reported in Washington on Wednesday, and the average of 155 daily cases was a 73 percent increase from the figure two weeks earlier.

As of Thursday afternoon, at least 19,678 cases of coronavirus had been reported, and at least 667 people had died in Washington since the beginning of the pandemic, according to a New York Times database.

The closures are the latest setback in a grim period for the country’s museums. A survey by the American Alliance of Museums published Tuesday found that nearly one in three museums in the United States remains closed because of the pandemic, and that most of those have never reopened since the initial shutdown in March.

“The financial state of U.S. museums is moving from bad to worse,” Laura Lott, the president and chief executive of the American Alliance of Museums, said in a statement announcing the survey findings.

The Smithsonian said visitors who had reserved timed-entry tickets would be contacted directly. Its outdoor gardens will remain open, no passes required.