A BRIDE has been shamed online for her white wedding dress with a black ombre hem, as Facebook users dubbed the gown 'filthy', joking it had been 'dragged through mud'.

The newlywed shared photos of the unusual dress as she tried to sell the custom made gown on the Facebook Marketplace, but her post was quickly taken to a wedding shaming group to be slammed by other brides. 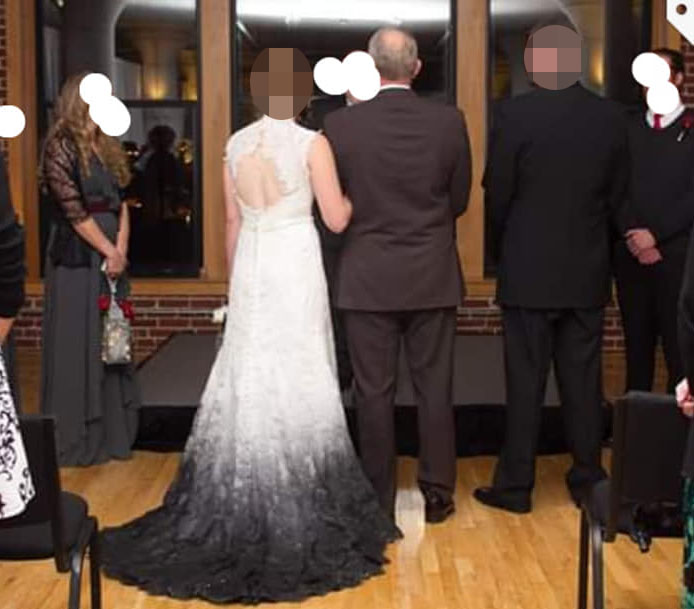 The white gown, which features a dip-dyed lower skirt which gradually fades from a light grey to black, caught the attention of one woman, who joked in was perfect for 'avoiding stains' along the hem.

Posting to the wedding shaming group, she wrote: "I'm equal parts repulsed by the 'ombre' dye job and impressed with her ability to think ahead and avoid the skirt getting stained when they say 'I do' in the coal shaft."

And dozens of women agreed the dress, sold by the bride for £130, looked 'dirty', with one comparing the black dip dye markings to 'a filthy oil slick'.

"I didn't hate it when I quickly glanced from afar, but closer up it just looks like the dress was dragged through the mud," one woman replied on the post. 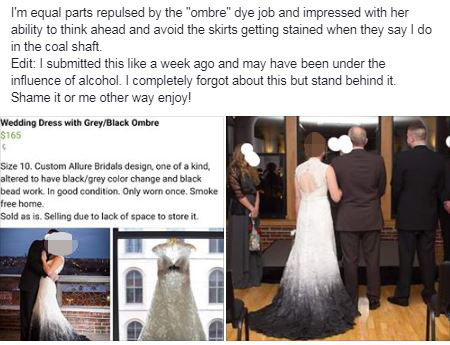 Another compared the gown to the dirtied white gown worn by horror film character Samara Morgan, saying: "This dress is straight out of 'The Ring'."

While a third simply added: "I just looks so dirty to me."

Others were fond of the unusual gown, with one woman praising the design for 'hiding stains', saying: "I actually love this. What a smart way to hide stains at the hemline."

And some couldn't make up their minds, with one commenter admitting: "I can't tell if it looks dirty or if I absolutely love it."

The unusual black and white dress comes just a month after a bride was slammed online for her ombre red gown that women compared to a used 'sanitary product'.

Stretching to the floor, the train was dyed a bright red shade that resembled a blood stain – with one commenter writing: "Am I the only one that thinks tampon?”

Shoppers also roasted a pair of bikini bottoms from M&S, which thanks to an oddly-placed pattern, made it look like the wearer had a bit of a bloody accident.