Was it only a couple of years ago that Gwyneth Paltrow sauntered up the grand staircase at the Metropolitan Museum of Art’s annual costume extravaganza, swaths of skin on show, curves encased in a slick one-shoulder gown?

On her return visit to the Met gala last month, Ms. Paltrow ditched that patently steamy look for a filmy, frill-neck Chloe gown so fragile, so absurdly prim, that it might have doubled as a christening gown.

Welcome to the summer of the chastity dress. One part comfort, two parts cover, it’s turned up this year in myriad variations: ruffled and ruched or discretely pared down, long or abbreviated, plain as a chador or raucously patterned and colorful — but invariably shrouding the wearer from the neckline to the shin.

Just don’t confuse it with the prairie dress. Last year’s sleeper trend with its treacly allusions to butter churns, quilting bees and starchily kitted-out sister wives, has given way to something less like a costume, less aggressively maidenly. 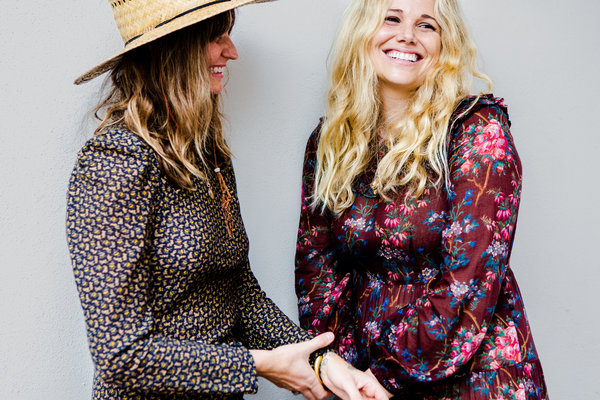 “To me Batsheva is almost an inside joke that Brooklyn hipsters get,” Ms. Graubard said. The aesthetic has evolved. “It’s deeper now,” she said. “It has a more intellectual tone.” 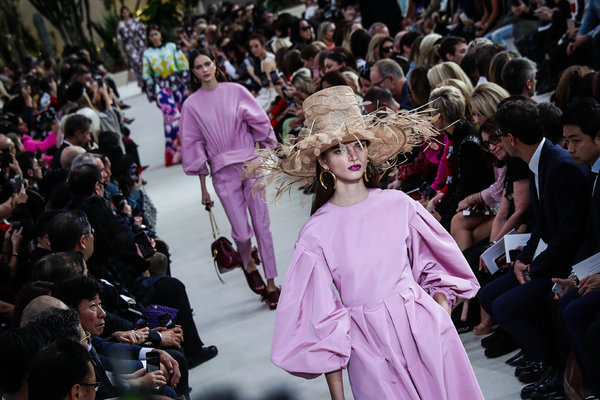 Indeed, there is nothing homespun about recent runway darlings like the balloon-sleeved pink silk faille midi Valentino released for spring; or a sweetly wispy calf-length pale chiffon from Zimmermann, a particular hit with millennials; or the demi-sheer caped midi dress Chanel paraded in its newly introduced resort collection.

Ganni, a popular Danish label, Jil Sander, Rodarte, Simone Rocha and the Londoner Molly Goddard are each offering versions of the trend, veering in style from rigorously streamlined to tent-like, sheer and multilayered.

Then there is Gucci, of course; its wickedly headstrong designer Alessandro Michele garnishing a long and lanky pink chemise with a gaudy trompe l’oeil bow, or sending an incongruously racy message by patterning a version of the look in cheetah spots.

Sober or shrilly colorful variations have turned up as well on popular web emporiums including Matches.com, Mytheresa.com, Net-a-Porter and Barneys New York, and at mass-oriented outlets like Reformation, H&M and Zara, which is selling a filmy white button-down dresses in near-sheer dotted tulle.

Hipper than thou, “the style is being adopted by people who want to be read as having cultural capital,” said Rebecca Arnold, a fashion historian and lecturer at Courtauld Institute of Art in London. Ms. Arnold may well have had in mind pop avatars like Ms. Paltrow; Zendaya, who appeared in a recent issue of Vogue wearing a saintly plain dusk-colored gown from Loewe; the celebrity model Jourdan Dunn, a picture of purity in a white, lavishly embroidered white Zimmerman frock; or Danielle Bernstein, who has showed off a rosebud patterned pink satin dress and other modest maxis on @weworewhat, her Instagram account with over two million followers.

Such long, curve concealing dresses, Ms. Arnold noted, can be a rebuke to male-defined notions of femininity. “In a repressive social climate,” she said, “potentially anything that is refusing male generated- ideals and stereotypes is a political statement.”

But it also is possible that the chastity dress is little more than the coy expression of a passing mood, mere role play.

A roguishly demure garden party frock “toys with the idea of what a woman’s costume or uniform is, and transforms it,” said Katharine Schub, a designer whose label, Homeque, offers a twisted, stripped-down interpretation: a faux leather pinafore. “The trend gives a woman agency to reinvent herself,” taking a swipe at conventional notions of sexiness and chic.

This latest expression of modesty is reflected in, perversely, a recent fascination with cults, like the real-life one depicted in “Charlie Says,” a film that follows the fates of Charles Manson’s vicious acolytes or Quentin Tarantino’s revisiting of the Manson murders, “Once Upon a Time … in Hollywood.” It’s mirrored too in “Women Talking,” a novel about women in revolt in a Bolivian Mennonite community, and of course “The Handmaid’s Tale,” which enters its third season this month, replete with the crimson cloaks and deep-visored bonnets often invoked a symbol of feminist protest.

But unlike such cumbersome costumes, imposed for the most part by a male ruling class, contemporary interpretations of chastity are often created by women for women, and prized for their relative ease. “These days it’s more liberating to be covered up,” said Maria Kozak, an artist in New York. Ms. Kozak made her way around Frieze this month in a long, loose geometrically patterned maxi of her own design. “I call it a confidence dress,” she said. “It’s flowy and feminine, and yet it has some sort of edge.”

“It’s a little tight around the neck,” she added. “That’s sexy, you know.”

The trend derives its impetus from digital platforms like Pinterest and Instagram. “The quickness of social media has exposed this type of dressing to larger audiences,” said Candace Marie Stewart, the social media manager for Barneys New York. She added that as the luxury sector becomes more inclusive: “You’re starting to see more than one way of dressing that might not traditionally have been seen.”

Wearing the chastity dress can be a provocation. “For the younger women in my office wearing a loose, concealing dress can be an expression of rage,” Ms. Graubard said. “In a climate that curbs women’s choices, it’s a way of saying, ‘You think you can control my body, but you don’t get to see it.’”

One that can also convey a stony authority, an observation perhaps not lost on Amal Clooney, Catherine, Duchess of Cambridge, or Claire Underwood (Robin Wright), the austerely intimidating first female president of “House of Cards,” sheathed in outfits that seem meant to evoke Melania Trump at her starchiest.

But chastity has its lighter side, the look sometimes embraced in a spirit of campy perversity. The wispy ball gown Ms. Paltrow wore to the Met Gala this year was inspired, she told onlookers, by a similar dress from “Valley of the Dolls,” the shamelessly lurid 1967 melodrama.

Villanelle, the wily assassin of “Killing Eve,” is more seditious, dressing for her murderous assignations in filmy ruche-necked Edwardian frocks or layer upon layer of dainty pink tulle.

Designers seem to have picked up the mood. “Our girl is always a little bit naughty,” said Nicole Zimmermann, a founding partner at the Australian fashion house that bears her family name. “She definitely has a bit of an edge.” Not unlike Ms. Zimmermann herself, who on the day she was interviewed wore a polka-dot frock with long sheer sleeves, a fitted body and a trailing skirt.

“I don’t feel like I’m in my grandma’s nightie,” she said. “I can definitely feel my arms, legs, and chest in this dress. It has its own kind of sexiness.”

That subtle suggestiveness, and a lacing of humor, goes some way toward explaining chastity’s maverick appeal. “Dressing this way feels like an act of rebellion,” said Arpana Rayamajhi, a jewelry designer and drama student. She’d been strolling the aisles of the Frieze Art Fair wearing a long, loosefitting cheetah spotted Gucci dress that concealed every curve.

“When I wear this,” she said, “I feel racy without having to show too much of myself.”