Red Bull might be most well-known for giving customers wings with its range of energy drinks, but the brand is now expanding into the world of soft drinks with a new lineup of sodas. Unlike most of the company’s other products, most of the offerings in Red Bull’s ORGANICS Soda line don’t contain any caffeine whatsoever — and the four flavors sound like a delicious and refreshing way to quench your thirst or mix a cocktail now that patio season is finally underway. Plus, as someone who is trying to be more mindful about the ingredients in the sips and bites that I put into my body, the fact that all four of these sodas also happen to be certified organic is just an added bonus.

According to press materials, Red Bull revealed that it is now rolling out its new ORGANICS Soda line in stores at select retailers like Sprouts, Kroger, and Albertsons. If you don’t happen to live near one of these stores, you can also order them online on Walmart’s website or on Amazon.com and get them delivered to your door (because, let’s be real, no one wants to have to worry about leaving to stock up on beverages while hanging out with your crew).

My first impression of the line is that it seems geared to be mixers for your summer cocktails, although you can totally also sip on them alone. There’s Red Bull Simply Cola, Red Bull Bitter Lemon, Red Bull Ginger Ale, and Red Bull Tonic Water — and surprisingly enough, considering Red Bull’s expertise with energy drinks, all of them are non-caffeinated except for one. According to press materials, Red Bull Simply Cola contains 32 milligrams of caffeine, which is about how much fuel you’d be getting from any other cola beverage. While you won’t be getting as much of a pick-me-up as you would with your typical energy drink, I’m definitely liking the fact that the caffeine is naturally derived from "organic coffee beans harvested on plantations all over the world" and that the ingredients all come from natural sources. Per press materials, you can expect a lightly-carbonated drink that isn’t too sweet with the ORGANICS by Red Bull Simply Cola, thanks to its flavoring deriving from "multiple plant extracts like kola nut, ginger and cinnamon."

Meanwhile, the ORGANICS by Red Bull Bitter Lemon sounds like something I’d happily drink by itself if I was craving some citrus-forward sips that are more sour than sweet. In each can, you’ll be enjoying a tart flavor with ingredients like citrus extracts, organic lemon juice concentrate, and plant extracts that promise to add a little bit of "herbal bitterness" to the refreshment.

The last two drinks in the ORGANICS line are the brand’s take on two traditional mixers: Ginger Ale and Tonic Water. With the ORGANICS by Red Bull Ginger Ale, you’ll be getting the trademark spicy flavor that you know and love from natural ginger extracts and tart organic lemon juice concentrate. Meanwhile, the ORGANICS by Red Bull Tonic Water probably has the lightest flavoring of the bunch with a "well-balanced sweet and sour taste" that’s tart and dry. Unlike in traditional Tonic Water, the trademark bitterness of the drink comes from plant extracts as well as notes of lemon and lime. 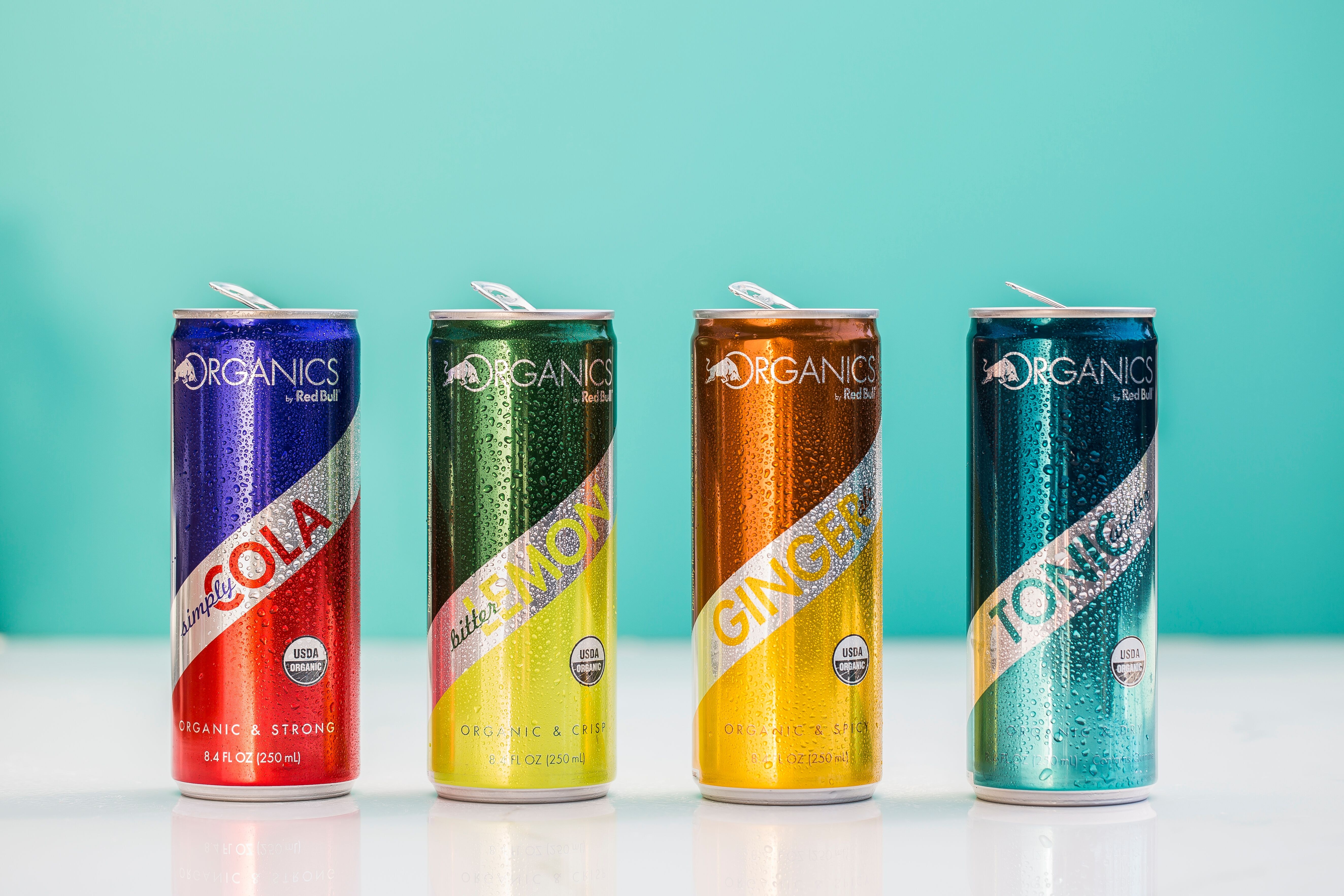 Prices vary for the different drinks, but it looks like you can currently get a 24-pack of the ORGANICS line starting at $47.77 on Amazon, or about just $1.99 per drink, so I’d shop around to find the best prices. If you’re looking for a more natural option to add to your soda repertoire this patio season, all four of these drinks are vegan, gluten-free, wheat-free, and dairy-free. In addition, they’ve all been certified organic and only feature natural ingredients, so you know what you’re consuming. Having a better idea about what exactly you’re sipping while enjoying some delicious sips? It sounds like a win-win to me.