MELANIA Trump may be turning 50 next year, but today showcased a body that a woman half her age would be proud of.

The First Lady of the United States stepped out during her UK visit in a white Dolce & Gabbana skirt suit at Buckingham Palace, and showed off her slender waist, toned legs and age-defying complexion. 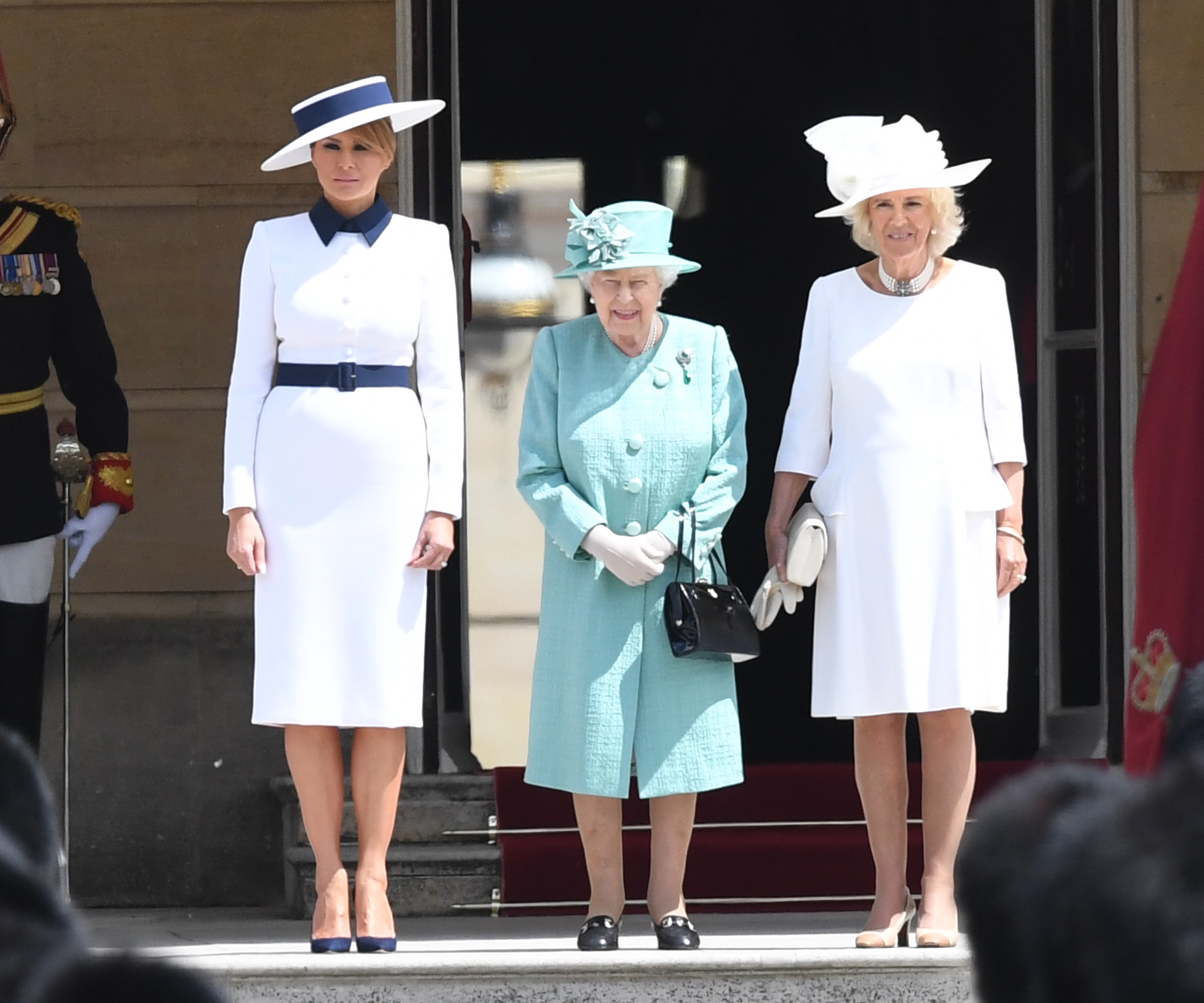 The beautiful mum-of-one takes great pride in her self-presentation, and is said to work out every day.

She is also said to have installed a glam room at the White House where she gets her hair and make-up done, and she also eats a whopping seven pieces of fruit each day.

So it comes as no shock that she's built up a legion of fans who praise her youthful appearance, with many taking to Twitter to sing her praises.

But how has Melania managed to become the First Lady of fitness and health? 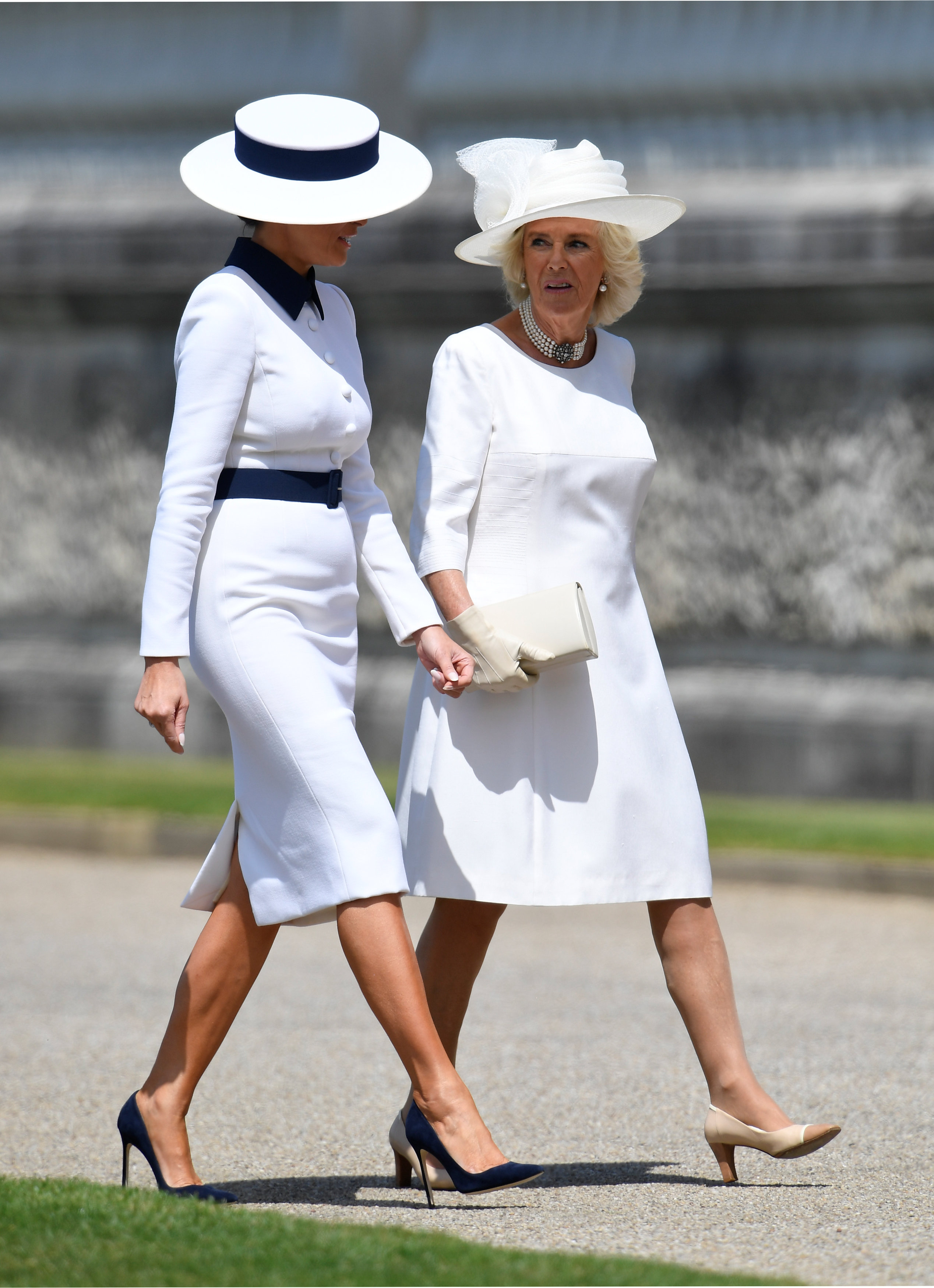 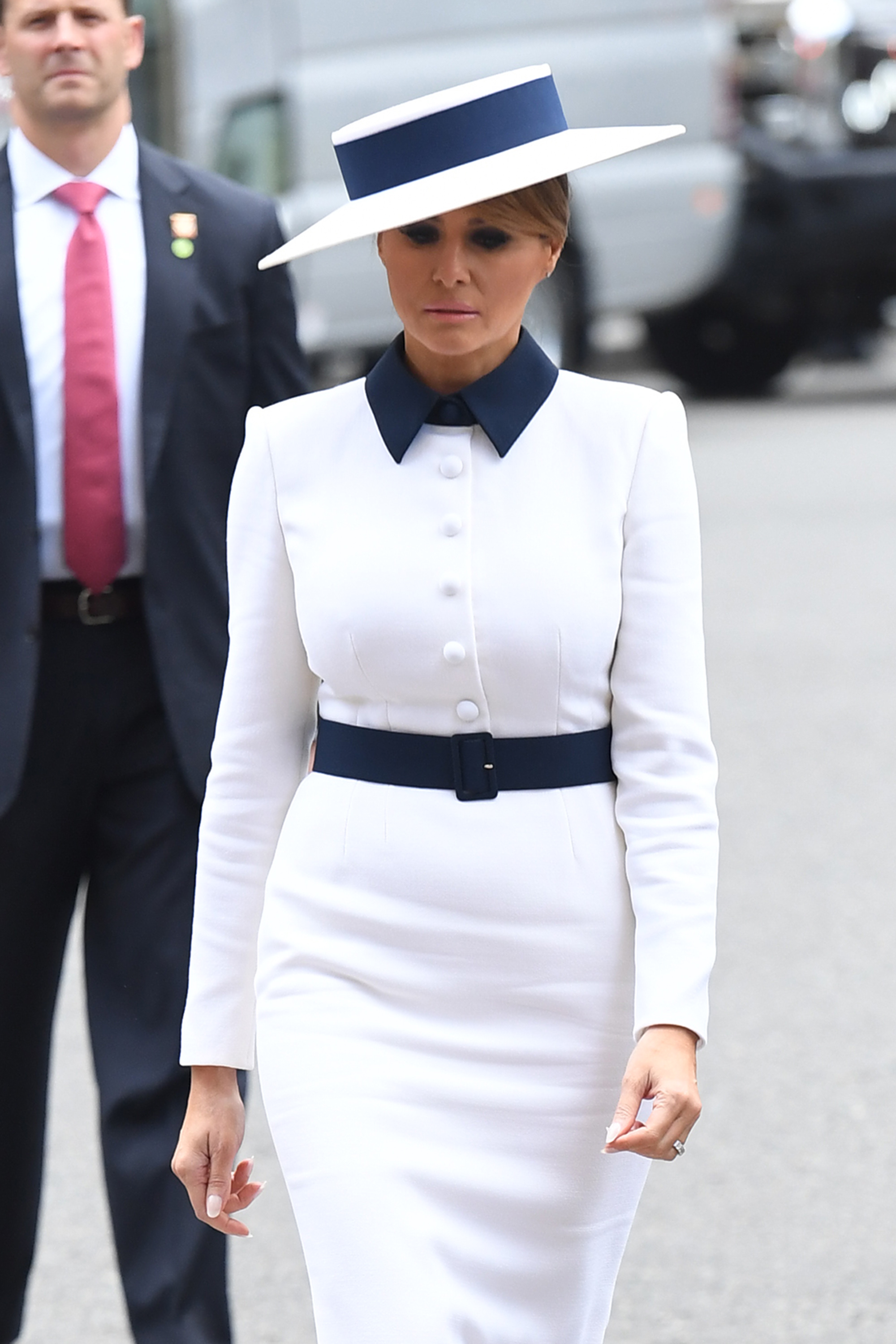 Given her jet-setting lifestyle and hectic diary, it comes as no surprise that Melania enjoys doing Pilates, as she can do it at home or on the go.

According to E! News, the First Lady practices the popular exercise in the White House, and is also a huge fan of tennis.

The Trumps don’t have tennis courts at the White House, but are said to have five at one of their favourite winter holiday spots, Mar-a-Lago, a mansion in Palm Beach, Florida, that President Trump converted into a private members club.

Melania can also play at the four courts at Trump National Golf Club in New Jersey, where the family have spent numerous summer weekends.

Stylist Melania always looks picture-perfect when she’s photographed in public, and it’s been revealed that her make-up takes 75 minutes to apply.

Her make-up artist, Nicole Bryl, told W Magazine: "[Each makeup session takes] about one hour and 15 minutes of uninterrupted focus.

“If you want the look to be flawless and have it last [throughout the day], you do have to take a little extra time to make that happen.”

Melania was also said to be building her own glam room dedicated to hair, make-up and wardrobe in the White House, complete with “the most perfect lighting scenario.”

She also applies creams with vitamins A, C, and E to keep her skin looking youthful and radiant, according to Allure. 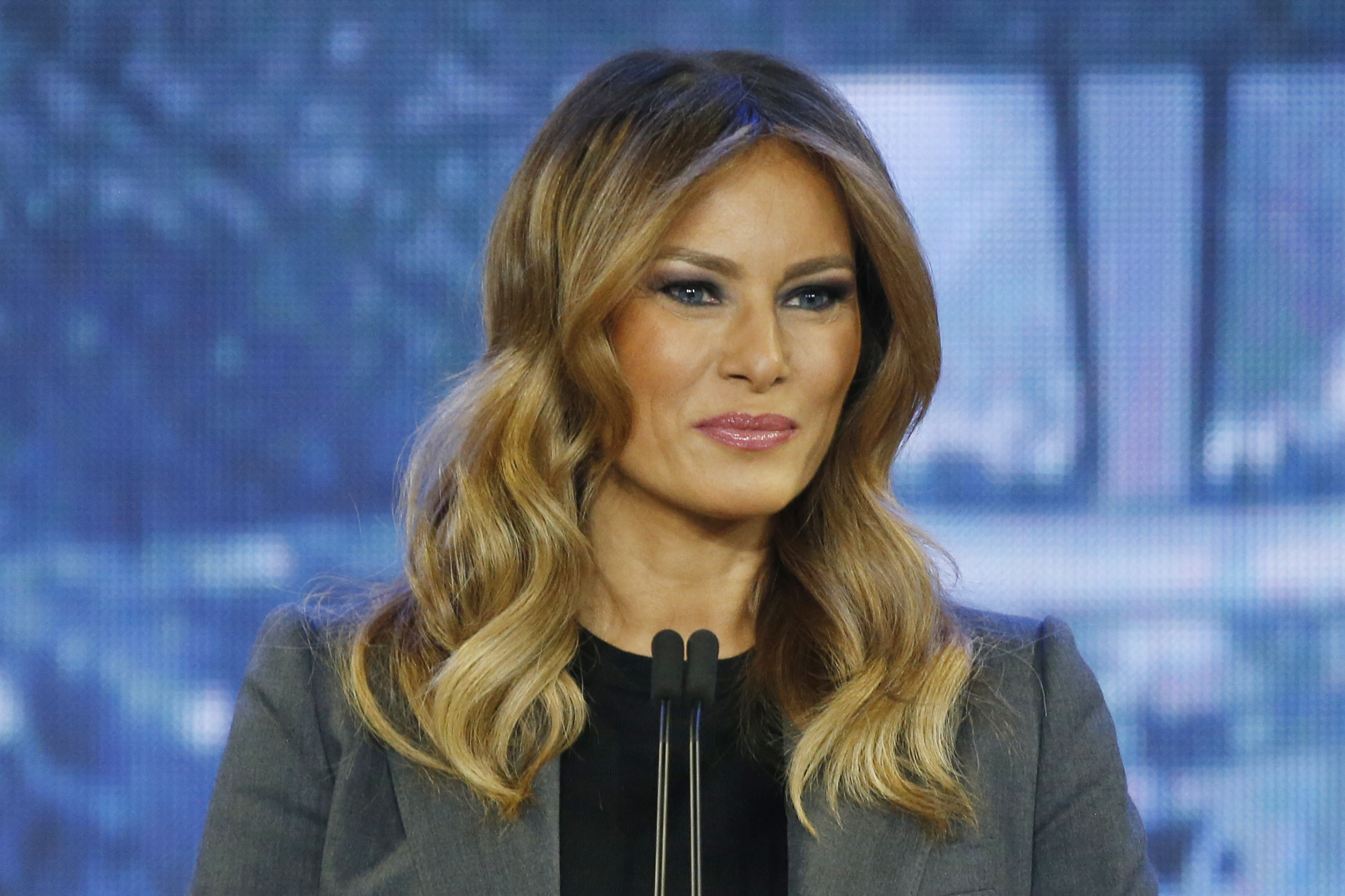 E! News also claimed that Melania wears ankle weights around her home in order to keep up her fitness.

But when she isn’t staying active, she told Allure in 2011 that her mum’s greatest advice to her was to “relax”.

She said: "When you take care of yourself, you can take care of others. Also, regarding the skin and the body, to have some relaxation time. It's good for your mind and your skin as well." 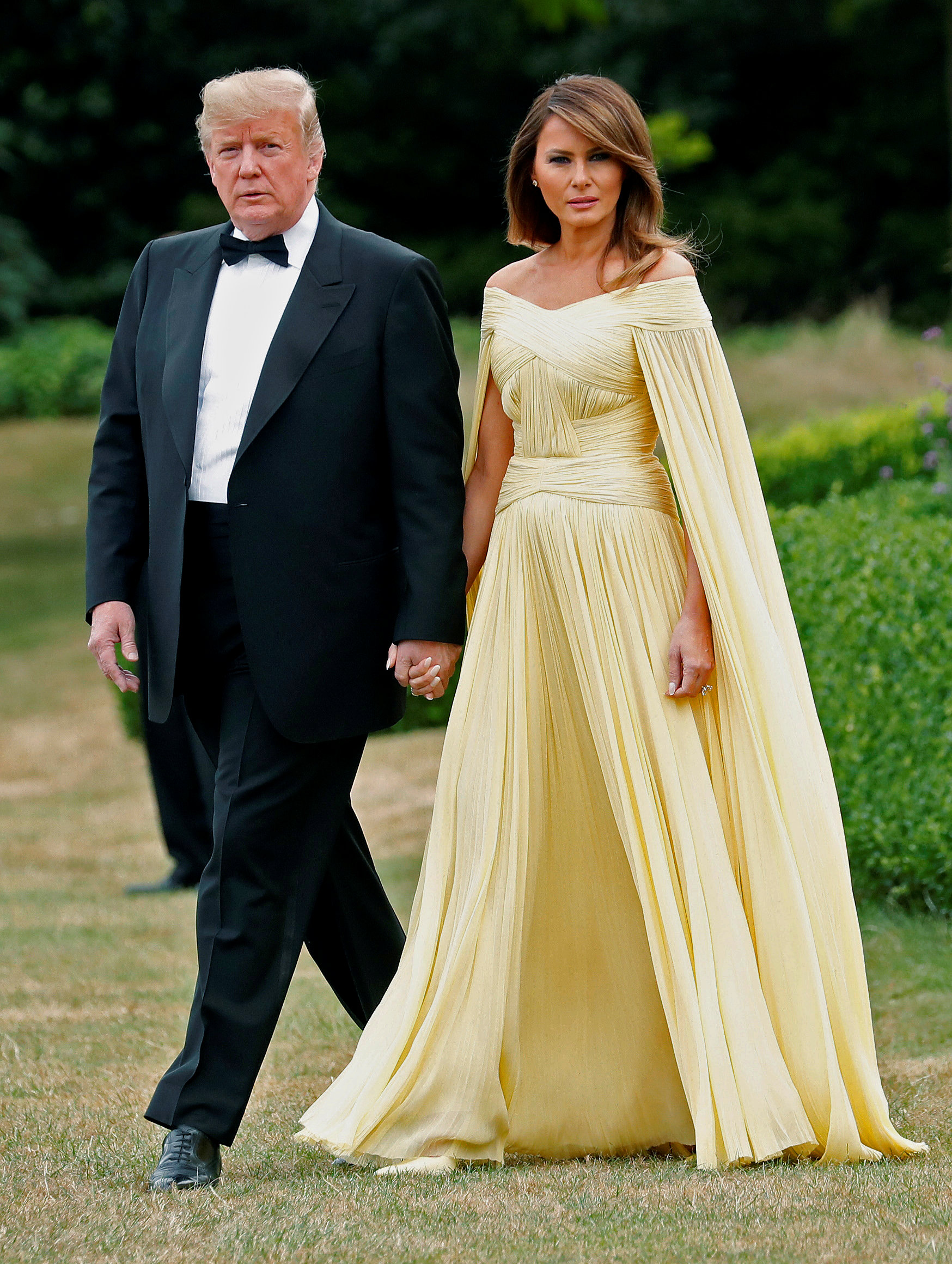 Melania is not only keen to keep up her exercise, but also tries to fuel her body with fruit and vegetables.

She starts the day with a smoothie for breakfast, which is packed full of “a few ingredients and lots of vitamins in it”, according to GQ.

Throughout the day she will eat seven pieces of fruit, but does balance it out with the odd indulgence.

In an interview with New York magazine she revealed some of her favourite treats include Diet Coke and chicken Parmigianino.

She told Refinery29 in 2012: "It's not a diet, I just like to eat healthy because I feel better and have more energy.

"If I would snack, I would snack on maybe fruit or a little bit of chocolate, because I think your body needs that, too."

The President of the United States is visiting the UK as part of three-day trip, accompanied by his family, where they have been greeted by the Queen and other senior royals.

Touching down in AirForce One, Melania wore a sleeveless Burberry pussy-bow blouse – a British fashion house – paired with a Michael Kors skirt.

President Trump matched his wife’s outfit in a blue suit, as inspected troops with Prince Charles, before sitting down to a private lunch with the royals.

He and Melania headed to Westminster Abbey, ahead of their lavish state banquet with the Queen later.

She wore a £3,500 Gucci dress printed with Big Ben, Tower Bridge and London buses as she left Washington yesterday.

And she donned a £650 Burberry blouse printed with medals, in tribute to D-Day veterans, as she landed at Stansted Airport this morning.