For too long Marvel’s superhero movies, with hammer-wielding gods and violent green giants, have been the exclusive domain of epic storytelling, but unexpected competition has arrived from the NGV with its summer blockbuster Alexander McQueen: Mind, Mythos, Muse.

Punchy storytelling through 120 designs by the troubled and talented Scot who died by suicide in 2010, aged 40, coupled with 80 complementary paintings, drawings and textiles from the collections of the NGV and LACMA (Los Angeles County Museum of Art) highlight McQueen’s design powers. 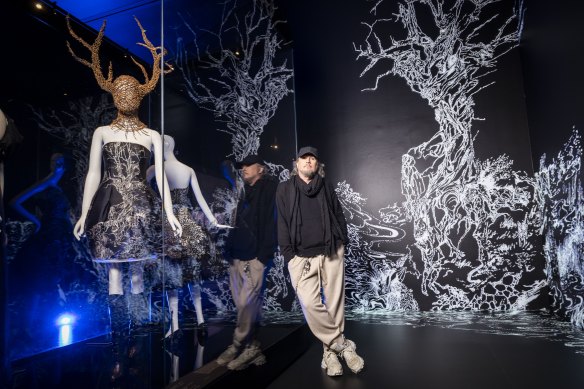 Opening of the Alexander McQueen exhibition at the NGV. Designer Michael Schmidt with some of his commissioned headpieces.Credit:Wayne Taylor

The combination initially seems perverse given McQueen’s reluctance to give others credit.

The curators fortunately didn’t know what he meant, unearthing historical work that clearly illustrates McQueen’s triumphant tomb-raiding of the past and creative pathways to design success.

The exhibition, which opens to the public on Sunday, after a black tie gala opening tomorrow night, was originally conceived at LACMA. Moving to Melbourne it has been given the full NGV treatment, last year respectfully applied to Coco Chanel at Gabrielle Chanel. Fashion Manifesto. 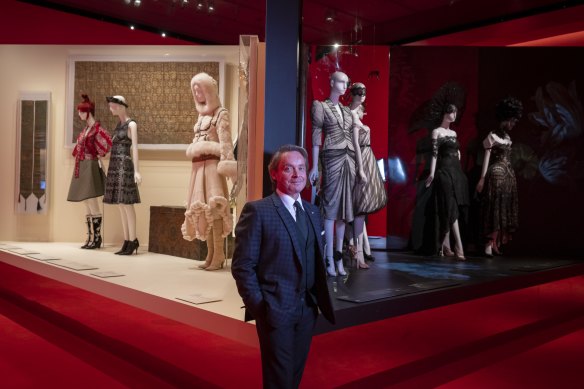 Spectacular sets and video provide the movement stolen by stiff mannequins, while a corridor of backstage photographs provides an illicit hit of adrenaline familiar in McQueen’s extraordinary output. Headpieces by Los Angeles-based artist and designer Michael Schmidt, enhance the individual moods of each garment.

This collision of stimuli comes to fruition in a space dedicated to McQueen’s spring/summer 2004 show Deliverance, inspired by the 1969 film They Shoot Horses, Don’t They? Screens on the floor and behind the mannequins add a layer of emotion to the outfits usually only found in the front rows of Paris.

In McQueen’s elevation to hero status, polishing the bovver boots of the son of a taxi driver and teacher from the East End, some of his charming villainy is missing.

This is the man who in the eighties supposedly stitched the phrase “I am a c*nt” into the lining of a jacket for King Charles, then Prince of Wales, during his Saville Row apprenticeship.

McQueen wanted to call his spring/summer 1998 show The Golden Shower and have models sprayed with yellow-tinted water (also, don’t try this at home). It was renamed Untitled, to the relief of sponsors American Express, and the water became black.

McQueen’s spikes might be dulled because the world of fashion has evolved to a place where he would no longer be an outsider. At commercial Italian brand Coperni’s show in September, supermodel Bella Hadid was sprayed by machinery into an outfit, 24 years after McQueen commanded robots spray Shalom Harlow in a belted white dress with paint.

In a video from 2000 with photographer Nick Knight, McQueen said that if he “explained the things in his head, it would shock people”. With this exhibition, the curators choose awe over shock and it works.

McQueen’s provocation has gone, even the skulls that became his trademark have been overwhelmed in the exhibition by family-friendly tartan. This offers a clearer view of surprisingly accessible designs, without the distraction of challenging theatrics.

Even with the gentrification of McQueen, leaving the exhibition there is a feeling of loss at the years of missed talent because of his early death. Alexander McQueen: Myth, Mythos, Muse belatedly offers the ultimate superpower – immortality.