RICHARD LITTLEJOHN: The Troll of Trondheim… Isn’t that what we used to call winter? I’m rather looking forward to Hurricane Higgins next year

The Troll of Trondheim sounds like a character from a Brothers Grimm fairytale. Mind you, these days it could be the hashtag of an anonymous madwoman who makes death threats to minor celebrities on social media.

This particular Troll, though, is the daft nickname given to the latest severe weather front which originated in Norway and is bringing freezing temperatures to much of Britain.

In recent years, our own weather forecasters have adopted the American practice of naming storms, even though we never experience anything on the same destructive scale as the tropical hurricanes which regularly cause widespread damage and loss of life in the U.S., most recently in south-west Florida. 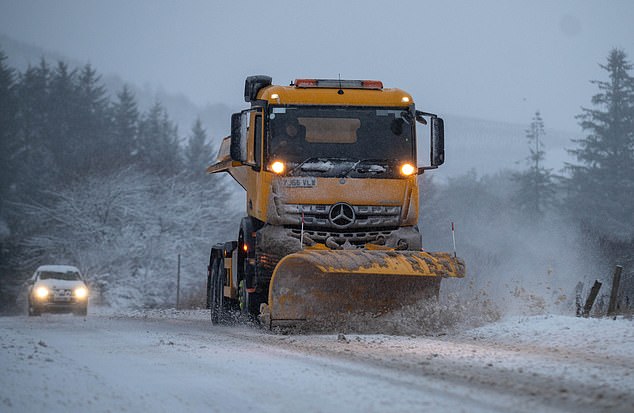 We’re adults. We know it’s cold. We don’t need anyone to tell us to wear a vest, or drink soup, or close the windows. So bring on the Troll of Trondheim. The snow is pictured above in Aberdeenshire

Still, I suppose if you work at the Met Office and largely deal in stiff breezes and a little light drizzle, it makes your job sound more exciting. It also helps them talk up the ‘climate emergency’ and pretend they are eco-warriors, rather than a bunch of nerds telling us it’s going to be a bit parky out tomorrow.

A couple of years ago, they brought us the Beast from the East, what we used to call ‘winter’. I’m rather looking forward to Hurricane Higgins next year, when a howling wind brings down a few trees on the South Coast.

Anyway, you’ve probably already become acquainted with the Troll, especially if you live in the North where she’s brought snow and icy conditions.

The Met Office is predicting temperatures plummeting to minus 10c in some areas. Not sure what that is in old money, but I would imagine we’re talking Brass Monkeys, as a basis for negotiation.

The Met Office is predicting temperatures plummeting to minus 10c in some areas. Not sure what that is in old money, but I would imagine we’re talking Brass Monkeys, as a basis for negotiation

My guess is that, before half the country turns into Ice Station Zebra, most people have already adapted to the cold snap. Nobody is going to be sitting around the house in nothing but a posing pouch or a lacy negligee. Unless, of course, that’s what turns you on. Takes all sorts.

With the cost of energy through the roof, we’ve made sensible adjustments accordingly — turning the thermostat down a couple of degrees, for instance, and wearing a jumper round the house.

But that hasn’t stopped the so-called ‘experts’ from lecturing us on how to combat the big chill.

Something called the UK Health Security Agency (UKHSA) has issued a ‘Level Three Cold Weather Alert’, just in case we’re too stupid to know how to deal with winter.

According to health consultant Dr Agostinho Sousa: ‘Cold weather can have serious consequences for health, and older people and those with heart and lung conditions.’ Well, knock me dahn wiv a fevver, Clever Trevor. I’d never have worked that out for myself.

‘In rooms you mostly use, such as the living room or bedroom, try to heat them to 18c. Keep your bedroom windows closed a night.’

Or, what, the bogey man might get you? We should wear several layers of clothing, and ‘hot food and drink is also effective for keeping warm’. 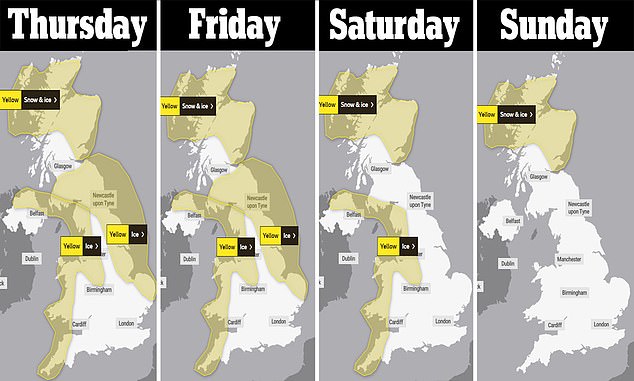 My guess is that, before half the country turns into Ice Station Zebra, most people have already adapted to the cold snap

Just in case you were thinking of turning off the heating tonight, opening all the windows and stripping down to your shreddies before tucking into a Mivvi and a bucket of frozen margaritas.

It’s bad enough when TV weatherbirds insist on telling us to ‘keep hydrated’ whenever the mercury goes above 60f in July.

We can certainly live without a taxpayer-funded quango, with a £5.15 billion budget, talking down to us as if we are all five-year-olds. In case you’ve never heard of the UKHSA, it used to be called Public Health England, which was supposed to have been abolished after failing miserably to make adequate provision for the pandemic — its main purpose in life.

But, as is always the way in the public sector, where other people’s money is no object, instead of being scrapped it morphed into a new super-quango, employing most of the same people.

Regular readers with longish memories may recall that we first came across PHE during the summer of 2014, when it issued a ‘Heatwave Plan’ advising us to stay indoors with the curtains drawn between 11am and 3pm every day. ‘If you have to go out, walk in the shade, apply sunscreen and wear a hat and scarf.

‘Eat cold foods, particularly salads, take a cool shower, bath or body wash. Sprinkle water over the skin or clothing and keep a damp cloth on the back of your neck.’ 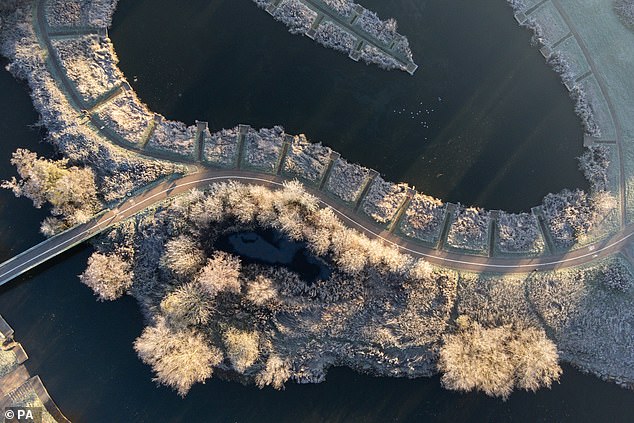 Something called the UK Health Security Agency (UKHSA) has issued a ‘Level Three Cold Weather Alert’, just in case we’re too stupid to know how to deal with winter. The frozen ground is seen above by the River Avon in Warwick

Don’t know about you, but I never leave home in the summer without a damp cloth on my neck.

You couldn’t make it up. But it got madder still.

‘Close curtains that receive morning and afternoon sun. However, care should be taken with metal blinds and dark curtains as these can absorb heat. Consider replacing them or putting reflective material in between them and the window space.’

Eh? As I wrote at the time, covering your windows with Bacofoil is normally associated with lunatics who are convinced they are being targeted by invisible death rays from alien space ships. It’s the type of behaviour which gets you sectioned.

Eight years on, the lunatics really have taken over the asylum. Or at least the UK Health Security Agency. The same kind of people responsible for ‘Heatwave Plan’ 2014 have graduated to ‘Level Three Cold Weather Alert’ 2022.

No mention of Bacofoil yet, but I did read somewhere that someone had suggested sticking bubble wrap to your windows as a crude form of double glazing.

That boy will go far, as Eric Morecambe used to say.

When the NHS is pleading poverty yet again, the Government is spending £25 million on an advertising campaign led by a health-related quango consisting of fatuous statements of not just the bleedin’ obvious, but also the barking mad.

We have come to expect nothing else, though. The assumption is always, always, that we are too stupid to think for ourselves and have to be bullied, badgered and nannied into behaving ourselves for our own good.

Past initiatives from PHE have included banning the sale of daffodils alongside fruit and veg in supermarkets, in case Chinese shoppers mistake them for spring onions; and distributing free rubber johnnies at food banks to so-called ‘Silver Singles’ — to encourage the over-60s to have safe sex.

And just look at the intelligence-insulting instructions we were force-fed during Covid. On the basis of that alone, Matt Hancock deserved to be publicly humiliated, pelted with excrement and forced to eat kangaroo genitals.

But that should have happened in Parliament Square. And he should have been in the stocks, not paid 400 grand by ITV.

Look, I don’t object to a little well-targeted advice every now and again, along the lines of ‘Let’s be careful out there’, made famous by Sgt Phil Esterhaus, from Hill Street Blues. But spare us the patronising, stop-picking-your-nose, now-wash-your-hands, eat-your-greens nonsense pumped out by the well-paid propagandists of Public Health England’s latest incarnation.

We’re adults. We know it’s cold. We don’t need anyone to tell us to wear a vest, or drink soup, or close the windows. So bring on the Troll of Trondheim. We’ve been here before. We can cope.