The savvy DIY fan and her husband Chad were on the hunt for their next project after turning their spare room into an apartment for nurses.

When Janelle and Chad enquired about the RV, their neighbour was so keen to get rid of it that they gave it to the couple for free.

Speaking to Insider, the mum, from Nipomo, California, explained how she spent four months and $5,000 transforming the caravan into a glam, liveable space.

"I knew it was a small space, so I wanted it to just be open, bright, and make it feel larger and cozy," she said. "I love how ugly it was. A bad 'before' makes the 'after' so much better."

To begin with, she focused her energy on transforming the outside – and after scrubbing away the dirt and mould, Janelle gave it a fresh lick of paint. 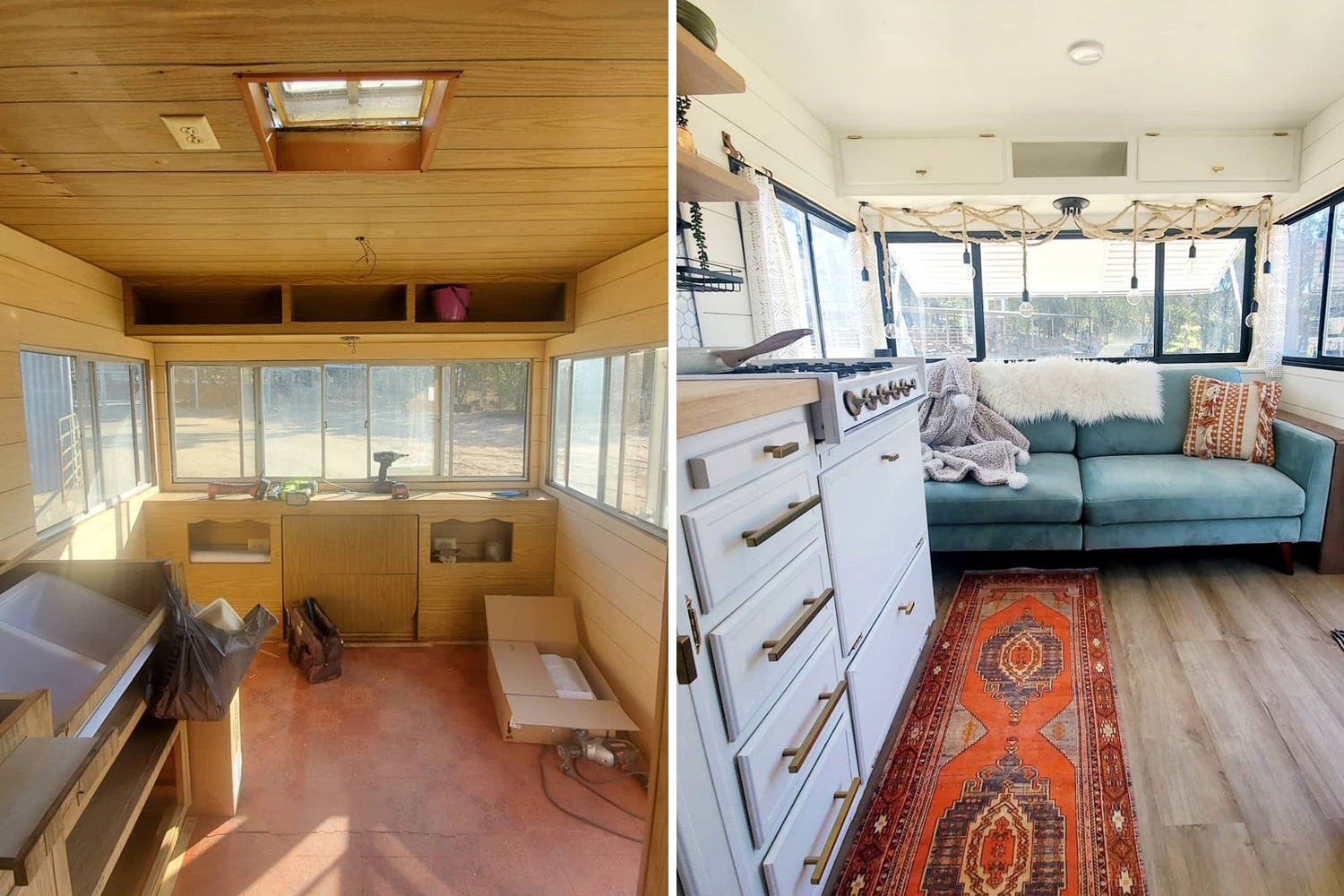 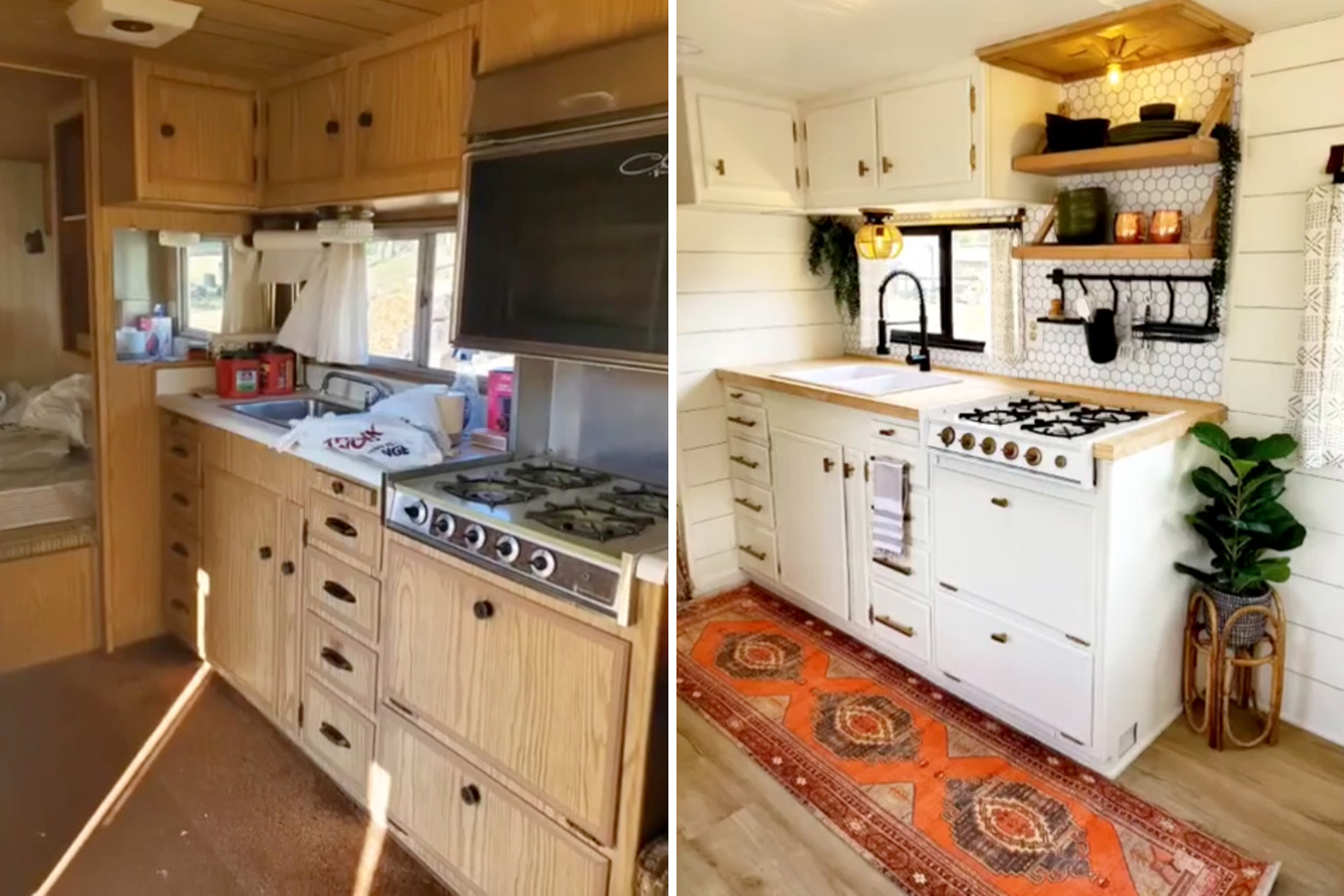 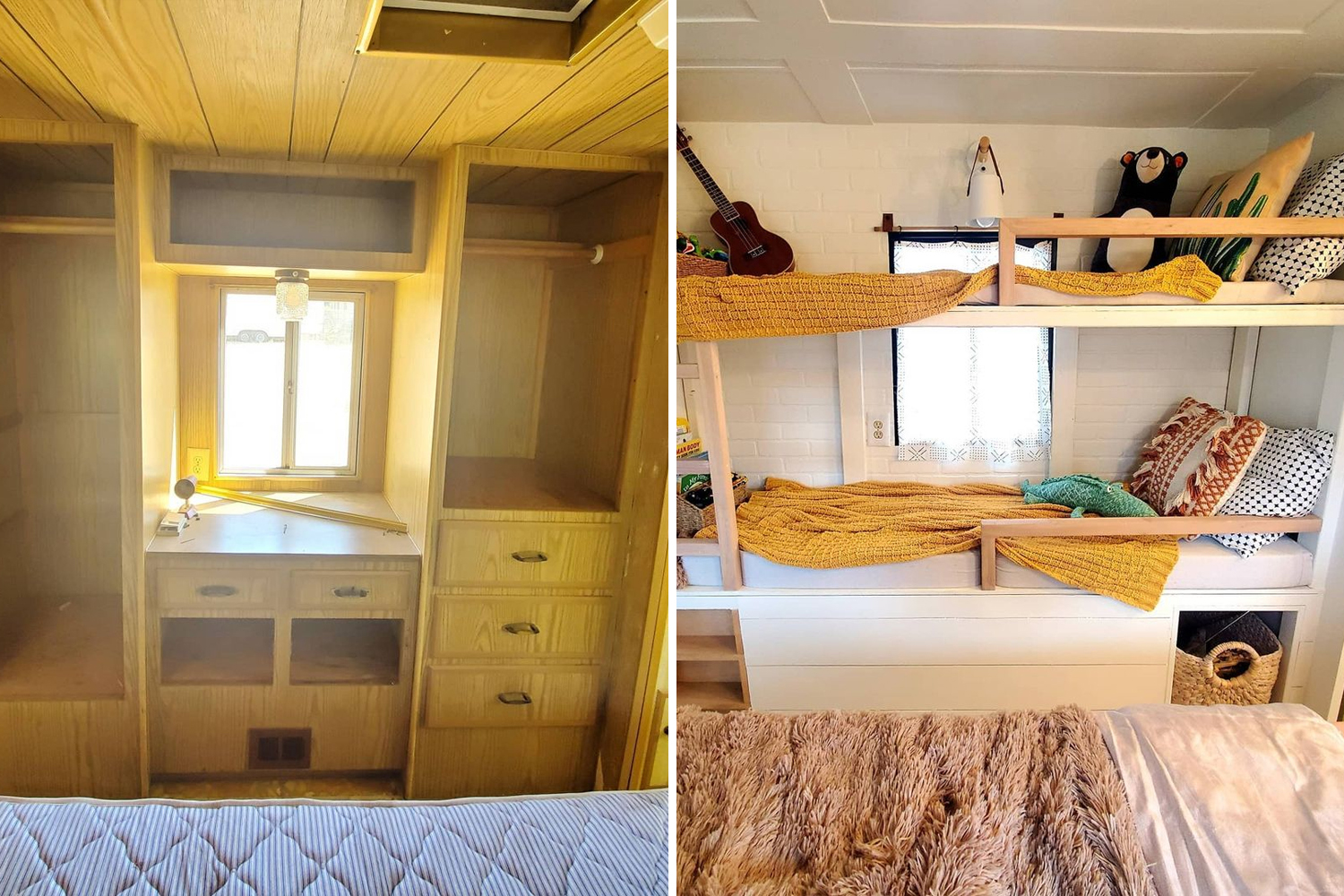 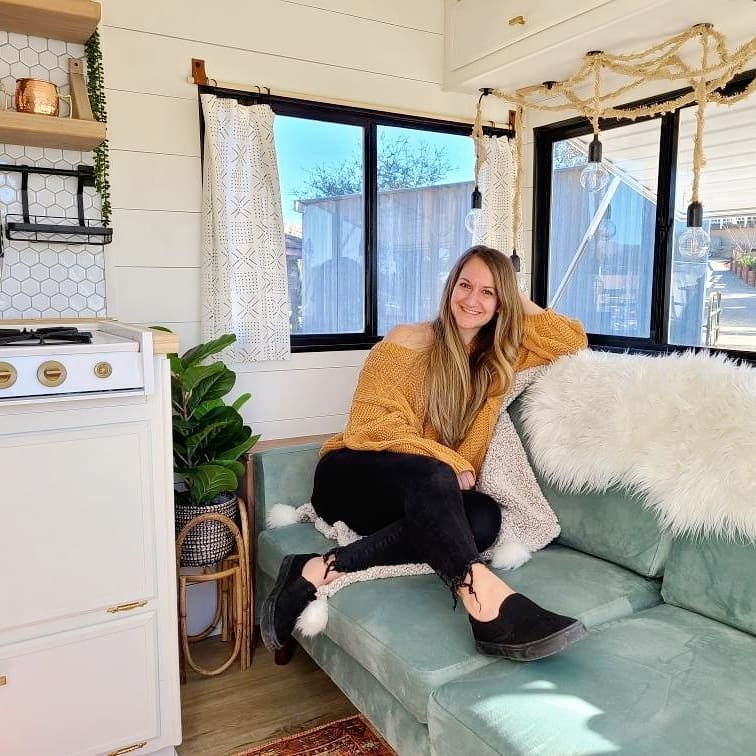 Next, she created shiplap-style wood awning to cover the front windows and made the living space bright and airy by painting the walls white too.

Luckily for Janelle, the kitchen was in a pretty good state and she simply upgraded to some gold handles.

In order to give it a luxe finish, she also picked out white hexagonal tiles for the splashback after removing the fan over the hob.

Janelle then added in some floating wooden shelves and a trendy light fixture above the sink before finishing off the kitchen with fake plants and rose gold accessories. 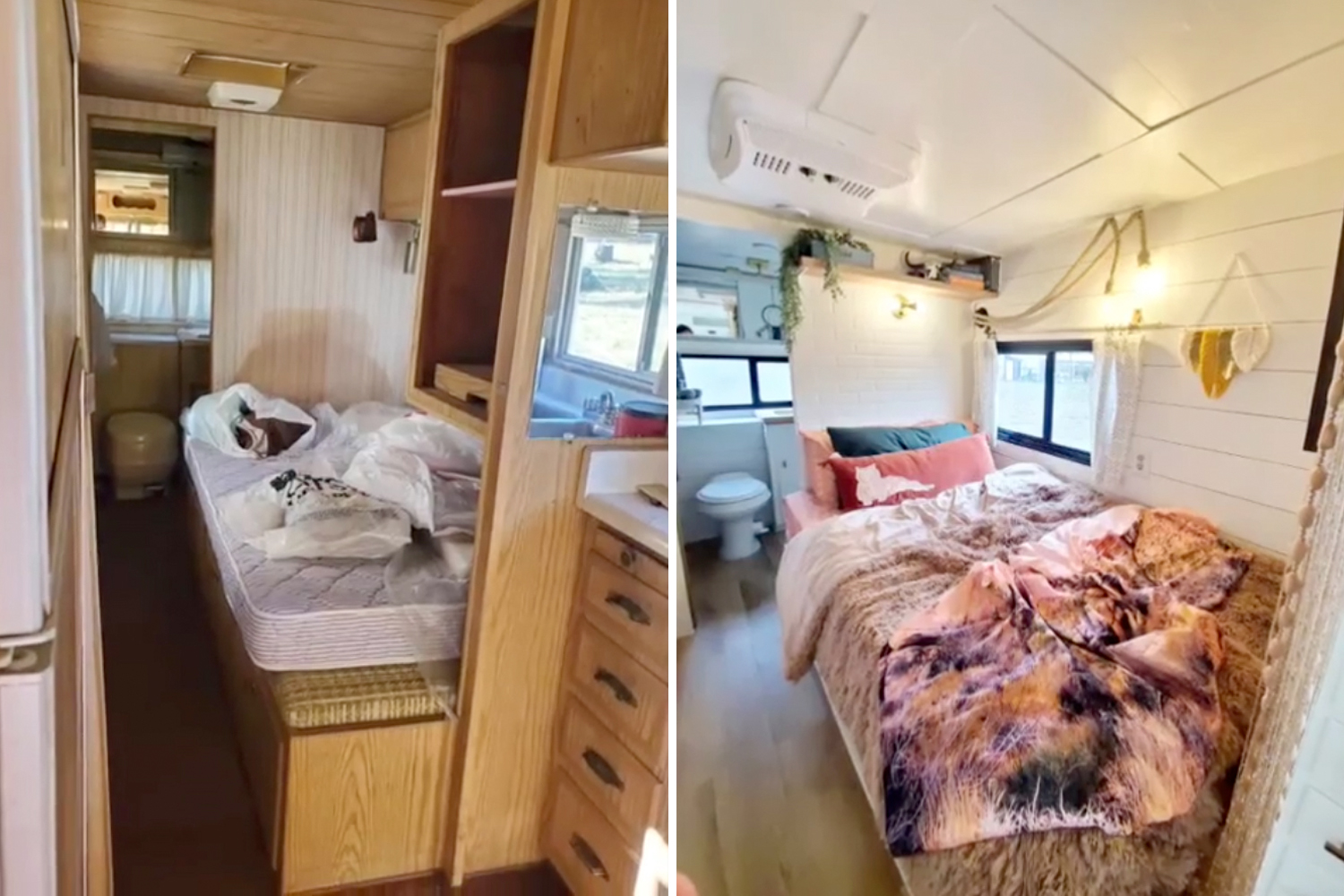 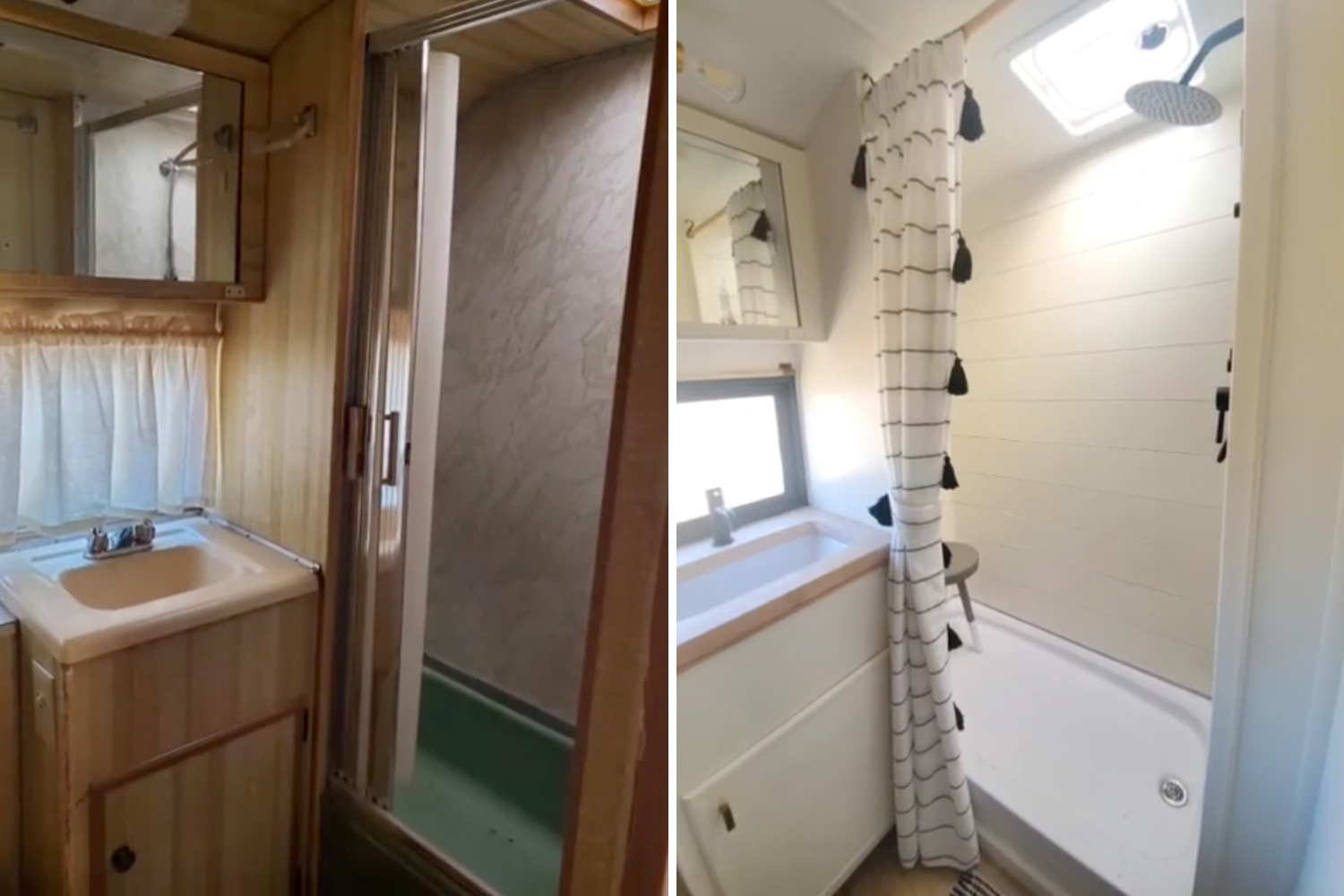 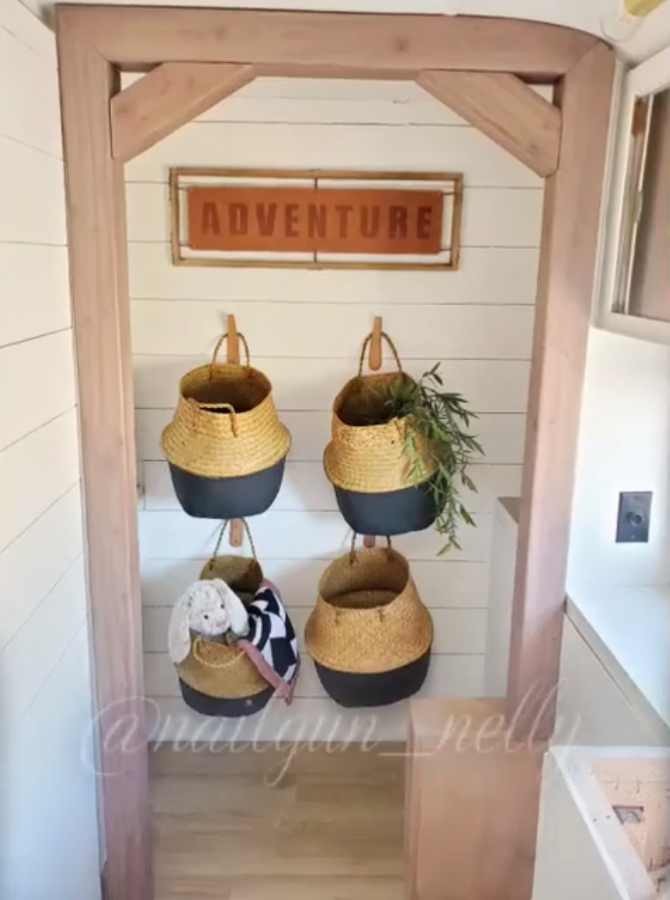 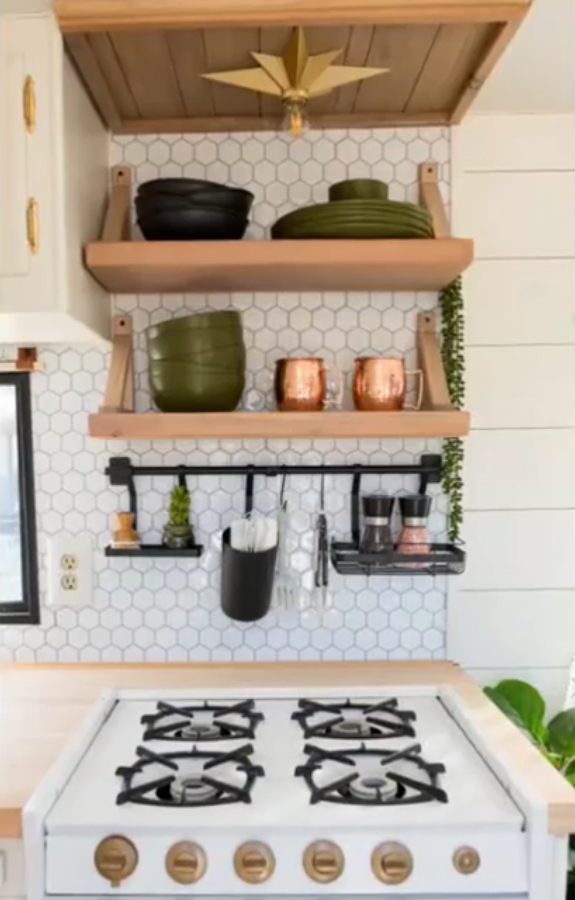 Although the caravan originally had a dining area, the mum chose to remove it as the family don't live there full-time and replace it with a luscious blue velvet sofa.

What's more, the mum also created bunk-beds in the corridor for her two boys Max and Rex to sleep in.

But in order to do this, she had to sacrifice the wardrobes – so she created closet space under the bunk beds instead.

Behind her and Chad's revamped bedroom is the freshly-renovated bathroom which even has its own skylight and new shower.

Needless to say, Janelle is thrilled with the results and added: "It's a little girly, eclectic, and a whole lot of cozy."

When the family aren't taking the caravan on camping holidays, they rent it out to other travelling nurses.

For more amazing home transformations, this mum revamped the dated kitchen in her rented house for £40 using Poundland stickers & it only took three hours to do.

And this thrifty couple who were quoted £10k to overhaul garden created a stunning space with B&M bargains (and there’s even an egg chair).

Plus this savvy mum quoted £15k for a new kitchen revamps it herself with £6 paint – and she did it all at 37 weeks pregnant.