As a child, Kevin Brousard loved the surf vibe of his hometown San Clemente, Calif., where his family lived for several generations. Born with a genetic disability that left him partially sighted but legally blind, he spent many idyllic days bodysurfing, though that didn’t cancel out the relentless bullying and teasing he received from schoolmates. “Some days it was brutal,” Mr. Brousard, now 31, said.

Mr. Brousard, who is 6-foot-5 and 250-plus pounds, was known growing up as “Mouse.” In high school, he sought to join the track team, an idea nixed by the coach who said he was at risk of being injured on the field.

But Mr. Brousard pushed his case and prevailed, excelling at both shot put and discus throw. He also joined the football team. “I couldn’t see the ball, but I could see the guy in front of me I was supposed to hit,” he said.

While still in high school, he participated in a Paralympic Games track and field competition. Soon he was traveling to countries like Brazil, South Korea and Portugal, collecting wins. Mr. Brousard is now a three-time International Blind Sports Federation world champion in track and field, a U.S. Paralympic record-holder, and a Paralympic Judo national champion. 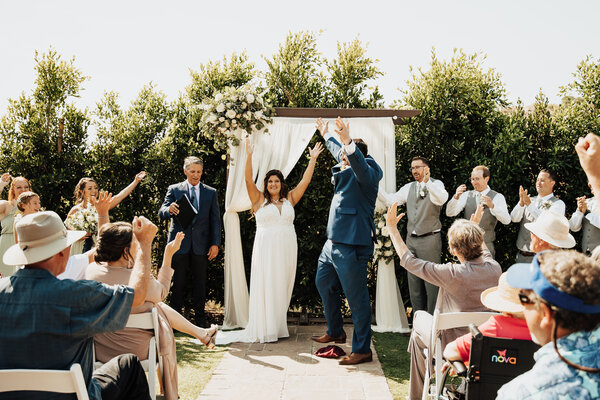 Mr. Brousard also speaks widely on being a blind athlete. It was at one of these speaking events in October 2017 that he captured the attention of Megann Karch, who works for the state of Colorado as a rehabilitation specialist for the blind.

After growing up in Traverse City, Mich, she had graduated from Grand Valley State University with a degree in exercise science in 2012 before earning a master’s degree in orientation and mobility from Western Michigan University in 2016.

“Kevin is really cute, but it was the confident way he presented himself that moved me,” said Ms. Karch, 31, whose job entails teaching the visually impaired adaptive daily living skills including how to independently travel.

When Ms. Karch discovered Mr. Brousard would attend a “Vision Expo” she was organizing, she strategically placed their organizations in adjacent booths.

During the event, Mr. Brousard wondered if Ms. Karch’s friendliness was strictly professional, but that confusion was alleviated on their first date at the Phantom Canyon Brewing Company in downtown Colorado Springs. They were soon inseparable. “For a long time, I didn’t consider myself lovable,” Mr. Brousard said. “I wondered if having a family was in the cards for me. With Megann I saw my future.”

On June 18, the couple self-solemnized their vows, as is legal in Colorado, and then celebrated at Las Mariposas Estate in Escondido, Calif. Under a hot sun, Richard Douglass, a friend of the family, led the intimate gathering in a moving ceremony that brought tears to the couple and many of their 70 guests.

Mary Domenichini, Mr. Brousard’s 96-year-old grandmother, lasted until the sun slid to the horizon and a cool breeze kicked up, which brought an enthusiastic crowd to the dance floor.

“With Kevin, I don’t see a person with a disability. I see the kindest, most patient person I know,” Ms. Karch said.