When Jennifer McClay read the letter her friend Hannah Bentley sent to Cates Farm, a Hillsborough, N.C., events space that was holding a contest for essential workers hoping to win a free wedding package, she cried.

In her October entry, Ms. Bentley wrote, “Though we always encouraged our friend Jennifer McClay to go on dates and tried setting her up with different men, she never felt she would meet a man she could love enough to get married.”

“It broke my heart,” Ms. McClay said of the letter. But she knew it was true: Since her divorce in 2007, her dogs had seemed better companions than the suitors Ms. Bentley and other friends steered her way. Steve Gustafson, a man both women had known since 2005, was never among those potential matches, though.

Ms. McClay, 43, is a certified nursing assistant in the emergency room at Duke University Hospital in Durham, N.C. Mr. Gustafson, 48, is a paramedic in Person County, N.C. They met on the job when both were married to other people; Mr. Gustafson’s ambulance often arrived at the emergency room where Ms. McClay saw patients. “We were friends for a long time, and then I got divorced and then he got divorced,” Ms. McClay said.

In February 2018, Mr. Gustafson asked Ms. McClay to grab a burger at Five Guys before her shift. “We had a really good time, and then a couple days later he asked me to dinner and after that, we found something we didn’t know was there.”

Mr. Gustafson found a woman whose openhearted approach to life inspired him. “Onetime Jen had me move a snapping turtle off the road so it wouldn’t get run over,” he said. “Snapping turtles will take your fingers off if you try to save them, but she would do anything to help any person or any animal. She wears her heart on her sleeve, and that’s why I love her.”

For Ms. McClay, “something just flourished with Steve,” she said. “I fell in love pretty quick.” Six months into the relationship, Mr. Gustafson moved from his home in Creedmore, N.C., to Ms. McClay’s house in Durham. In August 2019, he proposed at the top of Mount Mitchell, the highest point on the East Coast. “I said, ‘Right here, we’re really close to God and I have one question I want to ask you,’” he said. When he got down on one knee and asked Ms. McClay to marry him, she said yes.

The wedding they planned for the following May started unraveling in January, when Ms. McClay was told the wedding dress she had chosen could not be shipped from China, where the coronavirus was already spreading. A few months later, the hospital would be overrun with Covid-19 cases. “It became a full-fledged waterfall,” she said. “It’s been hard.” Mr. Gustafson started working 24-hour shifts on the ambulance, learning to deal with a pandemic on the fly. “The fire department didn’t want to go to E.M.S. calls, so we had to put extra trucks on,” he said. “We started having a big rise in cases.” 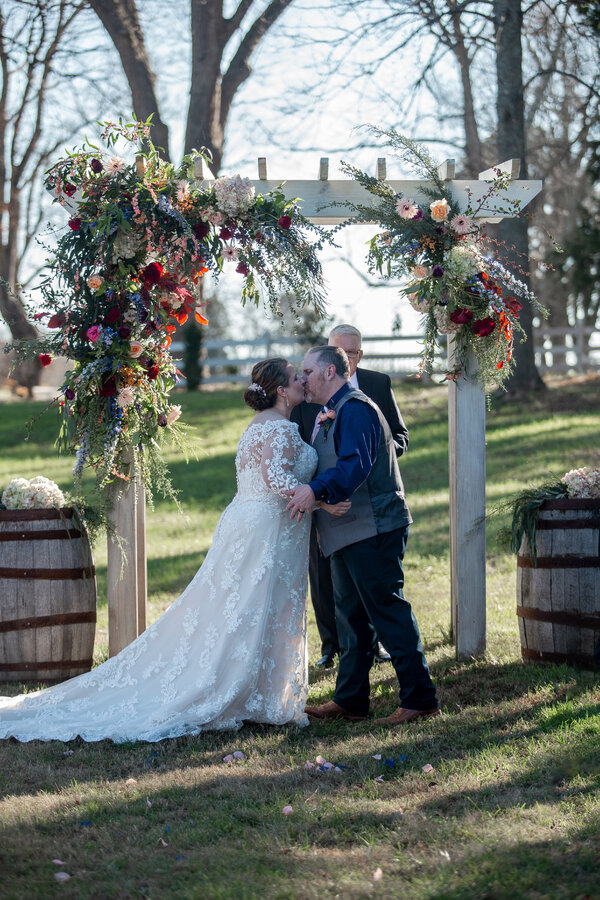 By summer, with the wedding postponed indefinitely, Ms. McClay was exhausted and feeling dejected. “I had a big chip on my shoulder,” she said. “I didn’t want to talk about anything wedding or marriage related.” Ms. Bentley, via the contest, came to the rescue.

“When my phone rang in October, I was at work and saw it was John Cates,”Ms. McClay said. Mr. Cates and his wife, Jennifer, are owners of the farm and judged the contest, which drew 23 entries. “I ran out to the ambulance bay to take the call,” Ms. McClay said. “When he told me we had won, I lost my brain. I was screaming and hollering and jumping. It was this blink of betterness in a terrible year, like luck had just turned in our favor.”

On Nov. 28, they were married at the farm in front of 50 guests by Fred Sullivan, Ms. Bentley’s father, who was ordained through the Universal Life Church. “I would have loved to have invited the whole world,” Ms. McClay said. “But this was plenty.”