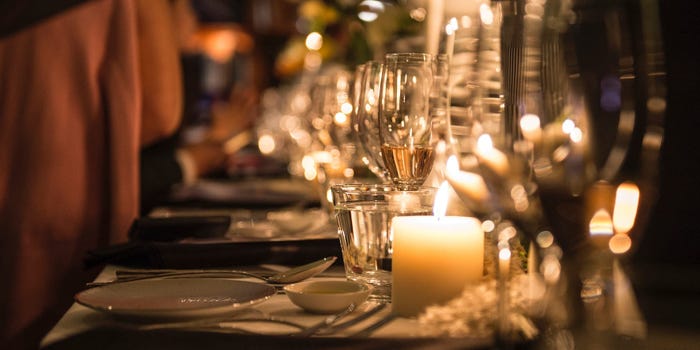 Officials in Beverly Hills denounced a restaurant's supposed plans to host an indoor "speakeasy"-inspired New Year's Eve dinner after an invitation for the event circulated widely on social media, according to a report from the Los Angeles Times' Matt Stiles.

On Christmas Day, writer Alissa Walker posted on Twitter a picture of an invitation to the restaurant La Scala, a Beverly Hills institution since 1956 that's known "for its chopped salad and its celebrity sightings," as described by Los Angeles news channel ABC7.

Walker's post, which has been retweeted more than 2,000 times at the time of writing, said the invitations were placed in bags containing takeout orders, which the Los Angeles Times and ABC7 also reported.

The invitation pictured read: "Welcome back to the '20s Prohibition," and went on to describe its plans for a "speakeasy" New Year's Eve dinner "inside."

"If this is something you'd be interested in, please let us know as soon as possible," the invitation read. "If enough interest we'll contact you back to secure a reservation. Please keep this discreet, but tell all your friends."

Beverly Hills, which is located in Los Angeles County, is currently under a regional stay-at-home order that was announced by California Gov. Gavin Newsom in early December.

Under the stay-at-home order, private gatherings "of any size" are restricted, and restaurants were forced to close their indoor and outdoor operations except for takeout, drive-through, and delivery services, according to a press release from the City of Beverly Hills.

After being tagged in a response to the widely circulated tweet showing what appears to be La Scala's invitation, the Beverly Hills Police Department responded that it was handling the matter. In its tweet, the department also shared the contact information for people to "report other COVID-19-related violations."

Beverly Hills city spokesperson Keith Sterling told the Los Angeles Times that city officials contacted the restaurant on Christmas Eve in response to the plans for its New Year's Eve event "to remind its management about restrictions in the county's order."

In a statement to the Los Angeles Times, the city spokesperson said: "We understand this is an incredibly difficult time for all of our businesses, however, the County Order does currently prohibit indoor and outdoor dining, including in the City of Beverly Hills."