Seth Spreadbury, a 37-year-old dad of two, shares with Men’s Health the lifestyle changes and habits that led to him becoming the fittest and strongest he’s ever been.

My wife and I experienced fertility issues while conceiving our second child; a process that took years, and was very taxing emotionally. We both struggled, and that was reflected in our lifestyle. Eating a whole pint of ice cream and drinking a few beers was not an unusual night. When we finally had our son three years ago, we both looked at ourselves and said, “What have we done to our bodies?” We were both athletes, and I continued competing, playing rugby, until my thirties. I’d never been this out of shape, and was frankly embarrassed by the way I looked, and how I thought it reflected on me as a person. I knew something had to change.

At first, it was just being active: moving some dumbbells around in the basement, going on short runs, and trying to eliminate snacks at night. Portion control was a huge hurdle, and frankly still is at times. About two years ago, I won a free one month membership to a CrossFit gym, CrossFit Eden Prairie. I showed up and put in work and really enjoyed it. I’ve always been able to lift weights, but doing it in that environment, with a competitive atmosphere and the camaraderie typically found in team sports, really helped.

In 2020, when COVID hit and gyms got shut down, my gym was nice enough to let me borrow a barbell and weights. Being at home all day gave me time to really focus on weightlifting and exercise. I made huge progress having that 24-hour access to weights. Once the gym reopened, I returned their equipment and immediately purchased my own. Now, I still go the CrossFit classes twice a week, but I also work out every single day, running 3 to 5 miles daily and then doing some sort of lifting, metabolic conditioning, or HIIT.

I started at my heaviest at 278 pounds. The first year, I lost about 30 to 35 of that. The next year, another 20 or so. This past year, I went from around 230 pounds to 203 pounds. My kids are 6 and 3, and they struggle to keep up with me now! I’ve got more energy and more confidence than ever before. I never was able to buy a slim cut or skinny jean before, and I’d blame it on the way they were cut. Now clothes fit better, I can wear whatever I want, and that always feels like an achievement in itself. I’ve also made some great friends at my gym that I wouldn’t have if I hadn’t become a part of that community. 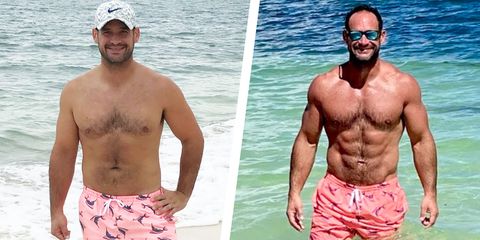 I’ve really embraced the lifestyle of being fit. Working with the coaches at my CrossFit gym helped, but like anything, you’ll only go as far as you’re willing to take yourself. I really am a believer on having no “zero” days. Some days are going to be better than others as far as accomplishing goals, but there shouldn’t be a day where you make zero progress. Even a strategic day off is work towards your goals.

The hardest part for me wasn’t doing the work. Once that becomes habit, it’s almost harder to miss a day of working out. The hardest part is the diet. Portion control, eliminating snacks, eating healthy on a night out, allowing yourself breaks but not taking it too far. That’s always a mental game. 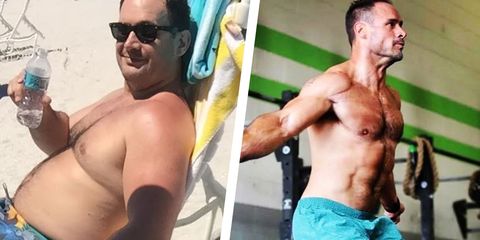 My advice to anyone who’s starting their own fitness journey is that showing up daily is the hardest part. Habits are easy to form, and hard to break, and healthy living and exercise is a habit. Once it’s formed, it will be with you.