Most Bachelor fans know half the fun of the show is having an excuse to pull out a corkscrew and an array of meats and cheeses on a weekly basis. But apparently, not everyone in Bachelor Nation is well versed in the ways of this Monday night ritual. As fans learned during Season 25, Bachelor Nation’s Matt James had never even *had* a charcuterie board until going on the show. So, as he watched his season unfold onscreen, he decided to make a Bachelor-watching snack board of his own — except with some unconventional ingredients. Half-disgusted, half-intrigued by his antics, I tried Matt James’ Bachelor charcuterie board to see if he was onto something.

The whole "Matt James’ charcuterie board" phenomenon started with the Jan. 18 Bachelor episode when he went on a date with contestant Serena Pitt. The couple rode horses in the woods of the Nemacolin Resort in Farmington, Pennsylvania, before picnicking in the grass. After Matt explained he was a charcuterie newbie, Serena broke down the basics of making a bomb snack board: "We have our meats and cheese selections. We have some fruit. Usually I’ll throw some dark chocolate on here. I like a good brie cheese with some jam," she explained. As they built the board, Serena teased Matt, telling him he needed to write all of the information down for future reference. 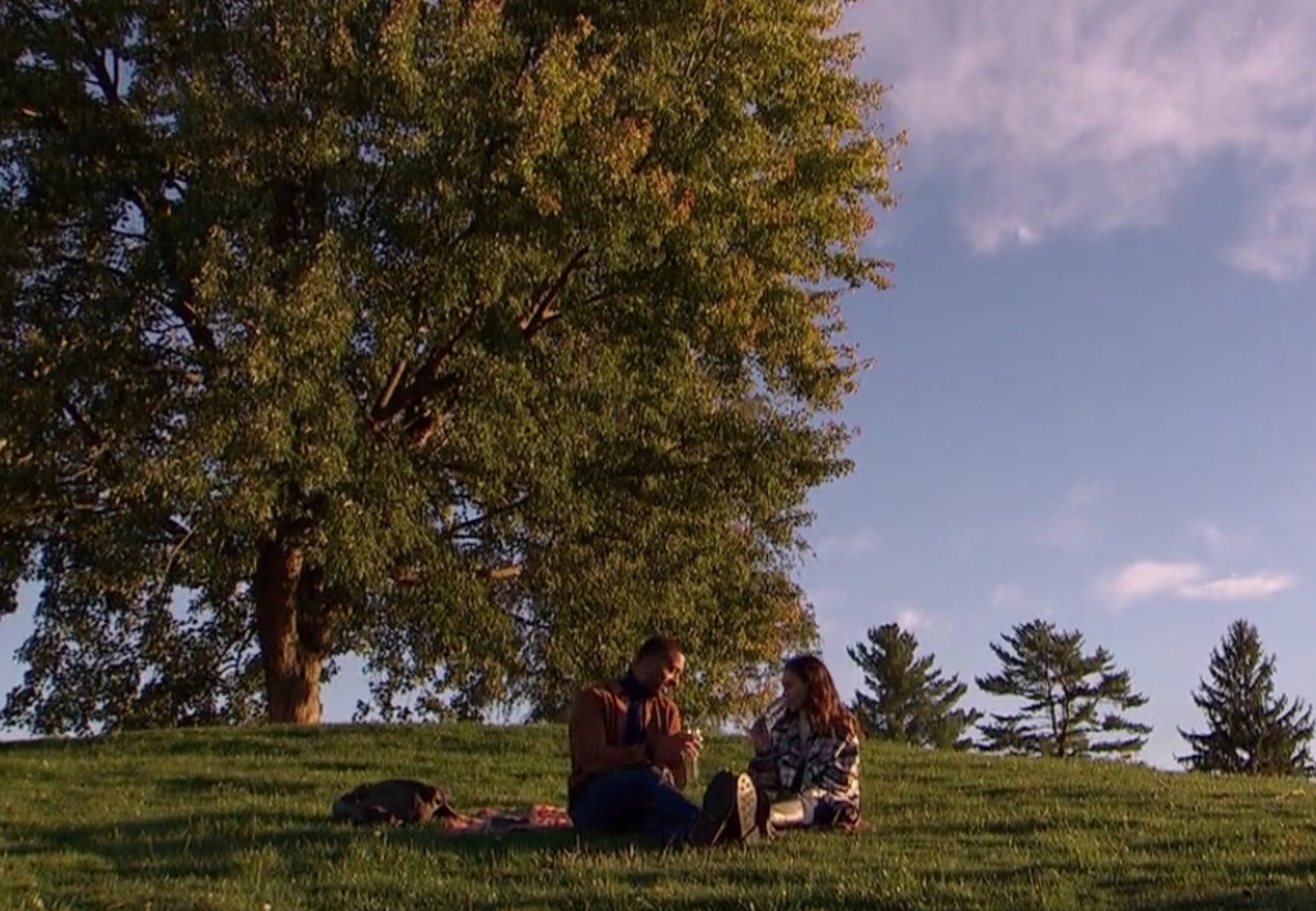 I didn’t see him taking notes during the episode, but it’s clear Matt learned something from this date. As the episode aired, Matt took to social media to share that he tried his hand at making his own version of a charcuterie board.

While some fans were feeling Matt’s, um, unique board, as a lover of all things charcuterie, it felt like a personal offense to me. Lunchables? Teddy Grahams? Hummus? By definition, "charcuterie" is the French art of preparing smoked or cured meats. (Usually, boards also include an array of nice cheeses, crackers, and fruits to pair with the salty meats.) This looked nothing like the elegant, splurge-worthy delicacies I’m used to working with for my boards.

However, after calculating the price of all Matt’s ingredients (about $15 total) and comparing it to the cost of my usual board (about $35 to $40), I decided to give his take a try to see if I could save some cash while still scratching that charcuterie itch. 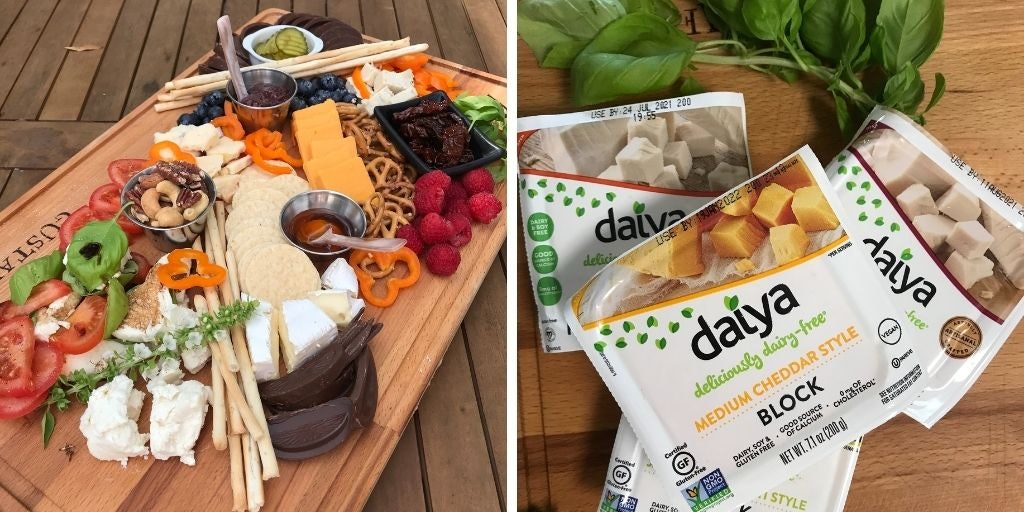 Before recreating Matt’s board, I needed to make one of my standard boards for comparison. Combining the different ingredients and flavors of a good snack board should be taught at Hogwarts, because it’s a tough feat to pull off, but when you do, it’s pure magic.

As a vegetarian/sometimes-vegan, I usually prepare my boards sans meat (which, I know, actually makes them cheese boards instead of charcuterie boards, but the ~elevated~ vibe is still the same). I also like to include a few non-dairy cheese options, tomatoes, fresh herbs, honey, jam, and a variety of crackers to complete the plate. 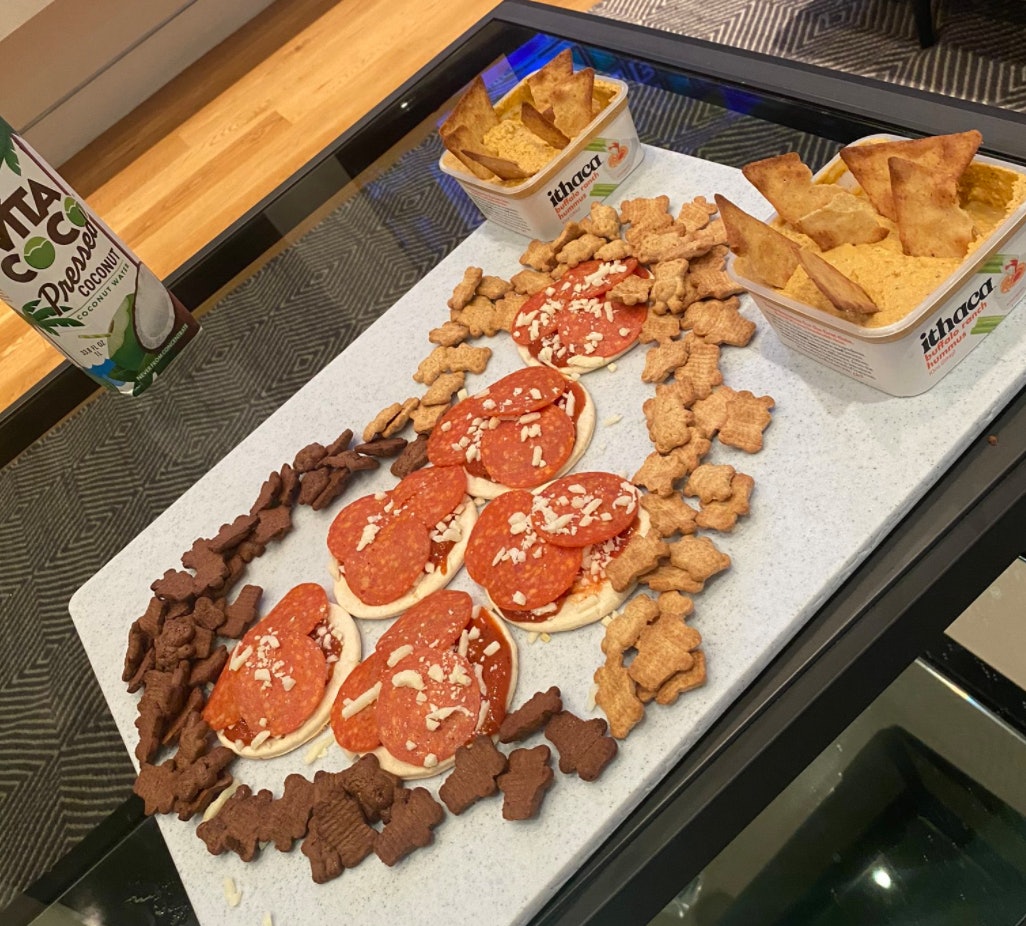 To say Matt’s board looks quite different from mine is an understatement. Not only have I not had a Lunchable or Teddy Graham since I was about 7 years old, but for Matt to call this creation charcuterie seemed like a big leap. The only "meat" is a few cheap pepperonis and the cheese option is shredded mozzarella — neither of which is likely to make an appearance on a high-end board. Like my own boards, this one is more of a snack plate than an actual charcuterie board. 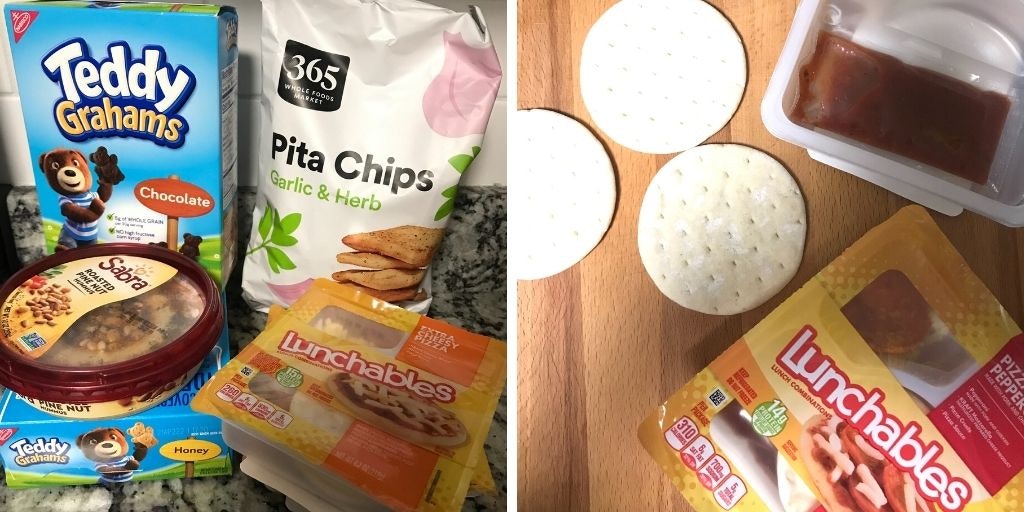 To make his board, Matt used two pepperoni pizza Lunchables (I swapped one of them out for a cheese version for my re-creation), a package of chocolate Teddy Grahams, a package of honey Teddy Grahams, some pita chips, and hummus. (Matt used Ithaca’s Buffalo Ranch Hummus but I had to opt for Sabra’s Original since my grocery store didn’t have Ithaca.) 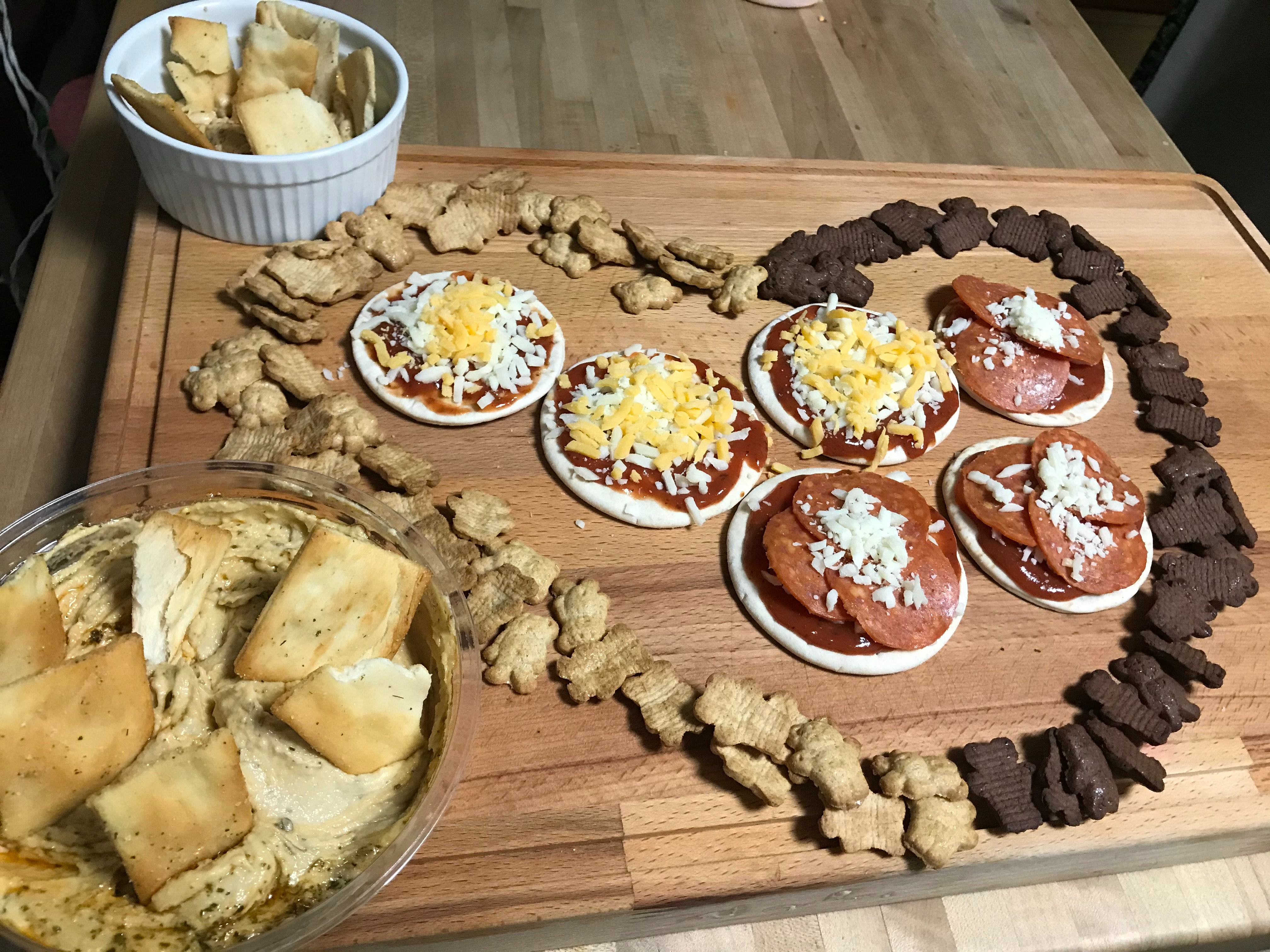 One of the perks of Matt’s board is that it was much easier to assemble than my go-to one, which is much more elaborate. Forming the Teddy Grahams in a heart shape was the most complicated part, but the entire process only took about five minutes to complete. 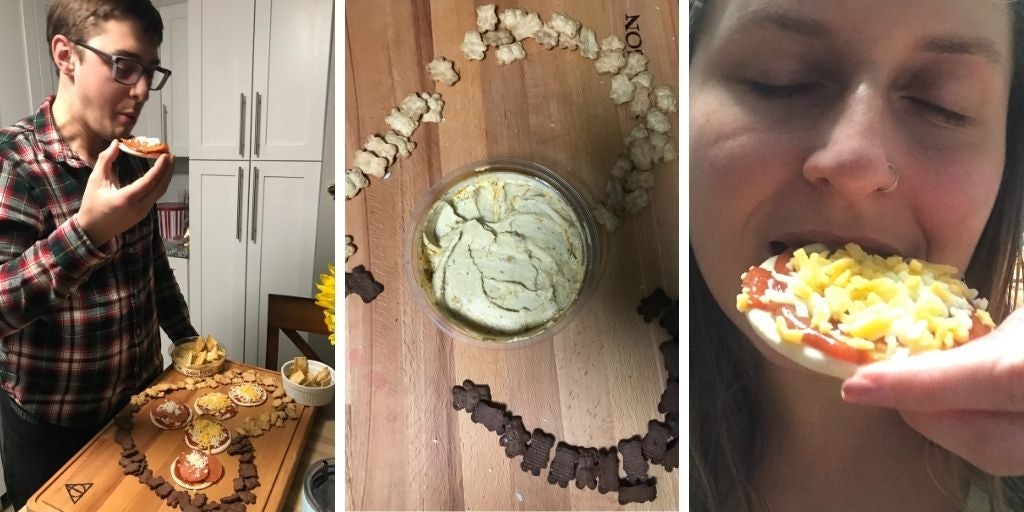 After setting up the cheese board, my husband and I chowed down. It had been so long since either of us had eaten this type of food, so we both felt nostalgic AF as we bit into our Lunchables and Teddy Grahams. Both items tasted just like we remembered: yummy but kinda lacking. There just weren’t any crisp flavors or spicy notes to contrast with the mild, kid-friendly foods on this board.

While my palate has obviously changed since I was a child — and I’ve come to except more high-end selections in my boards — we still managed to eat almost everything in front of us and only had a few small bears and hummus left over when we were finished. 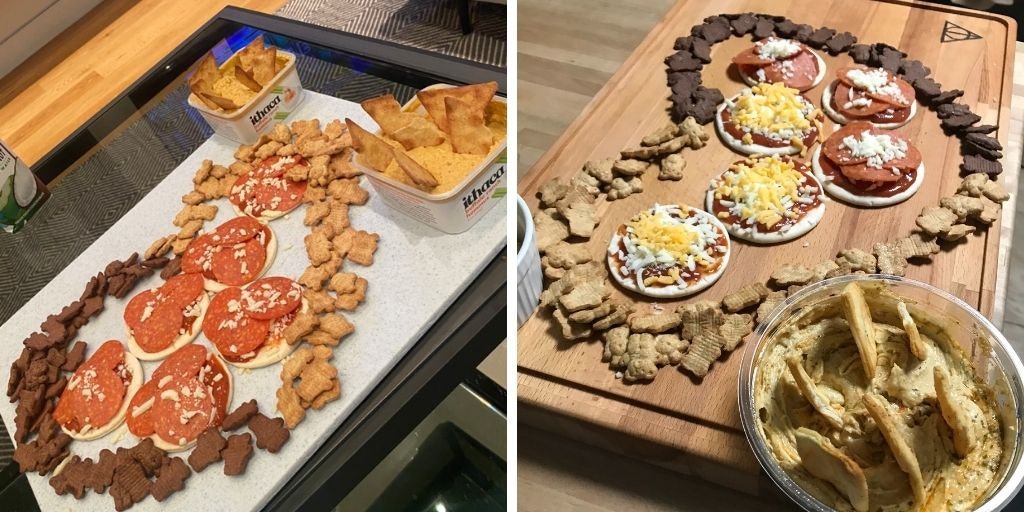 Despite my overall hesitation going into creating Matt’s board, it was actually really fun to eat. Sure, it’s not the most visually appealing and it definitely lacks variety, but for a few minutes, I felt like I was a kid again. That in itself was a treat.

Since Matt’s first attempt on Jan. 18, he has continued to experiment with his version of charcuterie, using ingredients like pizza rolls, Uncrustables, and dinosaur chicken nuggets to make his boards. However, I don’t think I’ll be leaning on his recipes again any time soon. This snacking experiment made me realize I actually want some nuts, fruit, and even veggies to snack on. I want to feel a little ~adult~ when I eat cheese for dinner. While that might mean my childhood is officially over, the fact that I can now drink wine with Lunchables made this hard truth just a little easier to swallow.

In Elite Daily’s I Tried series, we put celebrities’ favorite products, recipes, and routines to the test to show you what living like your fave star is really like. Read more here.