The federal agency that oversees the care of unaccompanied migrant children acknowledged to CBS News on Wednesday that a 10-year-old girl from El Salvador died in its custody on Sept. 29, 2018. The child’s death had not been previously reported.

She was the first of six migrant children to die in U.S. custody — or soon after being released — in the past eight months.

Mark Weber, a spokesperson for the U.S. Department of Health and Human Services (HHS), said in a statement to CBS News that the girl had a history of congenital heart defects. Weber said when she entered the care of an Office of Refugee Resettlement (ORR) facility in San Antonio, Texas, on March 4, 2018, she was in a “medically fragile” state.

“Following a surgical procedure, complications left the child in a comatose state. She was transported to a nursing facility in Phoenix, Arizona for palliative care in May after release from a San Antonio hospital,” Weber said. “On September 26, she was transferred to an Omaha, Neb., nursing facility to be closer to her family. On September 29, the child was transported to Children’s Hospital of Omaha where she passed due to fever and respiratory distress.” 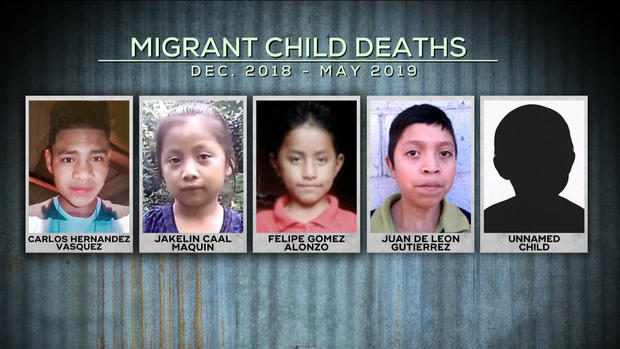 ORR did not release additional details about the girl, whose death was the first of a migrant child in federal custody since 2010, according to officials from ORR and the Department of Homeland Security (DHS).

Manuel Castillo, Consulate General of El Salvador in Aurora, told CBS News his office had no knowledge of the girl’s death. Castillo said the office was caught off guard by the news, and was hoping CBS News report would help him track down the family. Castillo said concerned local residents called him, saying, “We can’t let this happen again.”

In an interview with CBS News Wednesday, Rep. Joaquin Castro, D-Texas, accused the administration of concealing the girl’s death.

“I have not seen any indication that the Trump administration disclosed the death of this young girl to the public or even to Congress,” Castro said. “And if that’s the case, they covered up her death for eight months, even though we were actively asking the question about whether any child had died or been seriously injured. We began asking that question last fall.”

Castro, the chair of the Congressional Hispanic Caucus, said he is going to demand more information from the government about the girl.

“We’re going to make immediate inquires to HHS to find out what happen to this young girl,” Castro said.

Officials are required to notify local child welfare authorities and report such deaths internally, but are not required to announce them to the public.

The five other deaths involved children from Guatemala.

On Monday, a 16-year-old boy died at a Border Patrol station in Weslaco, Texas. A Border Patrol official said Monday that the boy, Carlos Hernandez Vásquez, was brought there the day before, after he told personnel at the McAllen, Texas immigrant processing center that he felt sick.

Border Patrol announced Tuesday that the McAllen facility had suspended intake of new immigrants because it “identified a large number of subjects in custody with high fevers whom are also displaying signs of a flu-related illness.” The center resumed normal operations Wednesday afternoon.

The four other deaths in U.S. government custody occurred among children either detained by Border Patrol, or released by the agency to a hospital.

On May 14, a 2 ½-year-old died after being apprehended at the U.S.-Mexico border in El Paso in April.