Aubrey O’Day is showing off her figure with a sexy snap after combatting haters who fat-shamed her earlier this week.

“made ya look. 😜” the former Danity Kane member wrote alongside the Instagram photo of her posterior on Thursday. 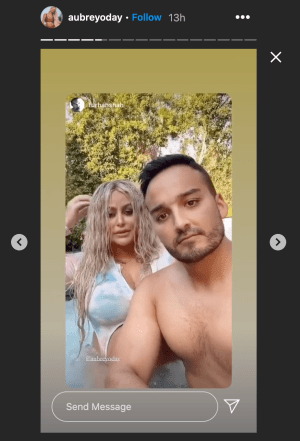 Meanwhile, on her Instagram Story, the 36-year-old posted a video of herself all dolled up in the pool, commenting to a friend, “Remember when everyone called me obese two days ago?”

“It’s so sick what ppl will do for click bait!” she tweeted along with a photo of herself in a black swimsuit looking slimmer. “And that my lawyer needed this photo to defend me against it.. when is this industry going to stop abusing women’s bodies! Sorry my place is a mess, currently remodeling my glam room- I’m sure it’ll be written that I’m a hoarder next!”

The “Making the Band” star’s lawyer Ben Walter told Page Six in a statement that, “The person in the paparazzi photos is not the same person in the picture that Aubrey shared on Instagram, in that the photo has been altered in an unflattering manner.  It’s clear to see that there are noticeable differences between the two photos.”

Walter added, “Aubrey has shared an unedited photo to put this issue to bed quickly.  While it appears that body shaming has become the norm (e.g., comments were made earlier this year about Jason Momoa and are frequently made about female celebrities), Aubrey will not tolerate it, nor will she allow others to manipulate her image, and finds it sad that this is a newsworthy topic given the current climate of the world.”

However, a source close to the photographer insisted the photos were “not altered.”