Consumers are using the coronavirus recession to wipe billions of dollars off their credit cards, wind down their use of cash and almost get rid of their personal cheque books.

Reserve Bank data released on Monday revealed the smallest number of personal cheques written in a single month since figures started being collated and an almost 8 per cent drop in credit card transactions since the advent of the coronavirus. 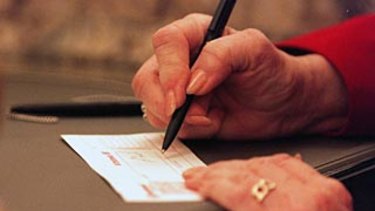 Personal cheque usage has been falling for several years.Credit:Phil Carrick

Lockdowns across parts of the country since March, record low interest rates and restrictions by some retailers on the use of certain types of payments have changed consumers' buying habits.

Stagnant wage growth and rising unemployment have forced many people to reappraise their personal finances.

The RBA data shows Australians have reduced by more than $8 billion, or 26 per cent, the amount outstanding on their credit cards attracting interest since the middle of last year.

Personal cheque usage has been falling for several years. RBA governor Philip Lowe has conceded the days of the personal cheque are numbered, saying at some point the cheque system will have to be wound up.

The coronavirus recession may be the tipping point for the cheque. Just 1 million cheques were written in July, a 25 per cent fall on the same time in 2019.

"Aussies have been falling out of love with credit cards for years but the COVID-19 period has led some to call time altogether and ditch their credit card," he said. "A chunk of the superannuation early release money has been used to wipe credit card debt. Necessity will mean some may have to use the credit card again but hopefully only for the minority and the rest will have kicked the habit."

The advent of buy now, pay later platforms such as Afterpay and growing online purchases have dented the use of cash.

Just $6.3 billion in cash was withdrawn from the nation's network of ATMs in April, when much of the country was in lockdown. It was the smallest amount of cash taken out since May 1999.

But since April, cash usage is on the increase. In July, Australians withdrew $9.5 billion in notes from ATMs.